“Like putting a band aid on a broken leg” 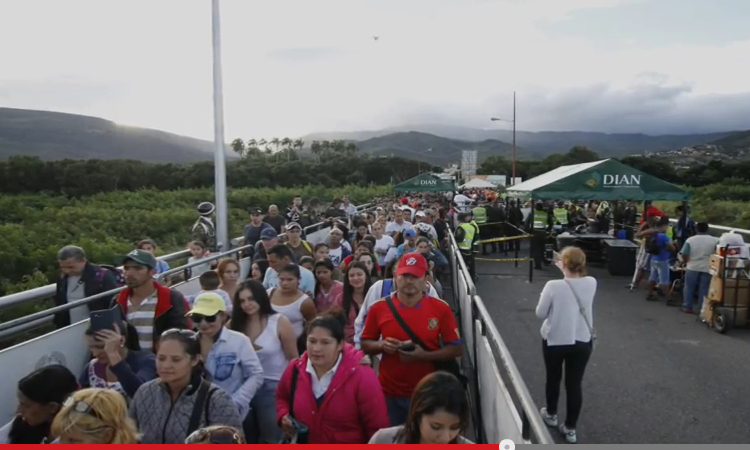 Here at Li, we’ve been covering the failure of socialism unfolding in Venezuela.  Toilet paper, sugar, and food shortages have resulted in violence and thus far unsuccessful attempts to oust President Nicolas Maduro.  With the country’s citizens tired, hungry, and angry, Maduro has landed on a “solution” that would make Pol Pot proud:  forced labor.

. . . .  President Nicolas Maduro is using his executive powers to declare a state of economic emergency. By using a decree, he can legally circumvent Venezuela’s opposition-led National Assembly — the Congress — which is staunchly against all of Maduro’s actions.

As a means of fixing Venezuela’s many and diverse problems that have resulted in the current shortages, this move is, according to Amnesty International,  “like putting a band aid on a broken leg.”

A new decree establishing that any employee in Venezuela can be effectively made to work in the country’s fields as a way to fight the current food crisis is unlawful and effectively amounts to forced labour, said Amnesty International.

“Trying to tackle Venezuela’s severe food shortages by forcing people to work the fields is like trying to fix a broken leg with a band aid,” said Erika Guevara Rosas, Americas Director at Amnesty International.

“The new decree completely misses the point when it comes to findings ways for Venezuela to crawl out of the deep crisis it has been submerged in for years. Authorities in Venezuela must focus on requesting and getting much needed humanitarian aid to the millions in need across the country and develop a workable long term plan to tackle the crisis.”

The decree, officially published earlier this week, establishes that people working in public and private companies can be called upon to join state-sponsored organizations specialized in the production of food. They will be made to work in the new companies temporarily for a minimum of 60 days after which their “contracts” will be automatically renewed for an extra 60-day period or they will be allowed to go back to their original jobs.

Given the Maduro government’s focus on both keeping its citizens “quiet” and on “criminalizing those who dare to speak up against government policies,” it’s possible that Maduro will focus on political detractors and dissidents for removal from urban areas to forced farm labor.

Pol Pot could not be reached for comment https://t.co/ny7Dgj6e8D

Forced labor = slavery</b. Which is the end result of running out of other people's money and resources.

Maduro and his henchmen will not be working on the farms any time soon. They will sitting in their silk shorts eating like pigs while the population starves even further.

Do the people there realize that they voted for this inevitable outcome of socialism? The only question is the arrival date.

No they didn’t realize this anymore than do our latte liberals who think that socialism is the best thing to come down pike. After all, we have smarter people than everyone else, right?

Socialism uses the stick, whereas capitalism uses the carrot. One is coercion, the other is an earned reward. It doesn’t get any more simpler than that.

One works and one doesn’t. Guess which is which.

Even under the most ideological Communist regimes, if you didn’t work you didn’t get “paid”. And you most certainly were compelled to work.

It’s a law of life. Living requires work, unless you are the beneficiary of pure charity from someone who works and provides for you. Even being a parasite requires some work. That’s true literally in biology and figuratively in society.

Of all economic systems, market capitalism provides the MOST rewards for the work done by any individual. That’s the way in which it “works”.

But it is also the MOST moral of all economic systems, in that it allows the individual to enjoy the greatest choice (or liberty).

Obama must be so jealous.

There are no good socialists, but dead ones do measurably less direct harm.

Socialism’s inevitable shortages can be a problem in correcting the situation. PRO TIP: nylon rope can be used over and over.

Wouldn’t you just love to see a bunch of the young special snowflakes in this country forced to enjoy such beautiful benefits of socialism!

“You’ll need to spend your next semester on the farm, doing your part, working toward our bright, shining future utopia!”

The next step is to go after all the kulaks.

Where are all the Hollywood progs who sang the praises of Chavez and his Bolivarian Revolucion?

The Russians (and others) have already been down this road. They want to give (lease) 1/3 of an acre to everyone who wants to plant a garden. That is what worked the best (It is nothing like a free market) for the Russians.