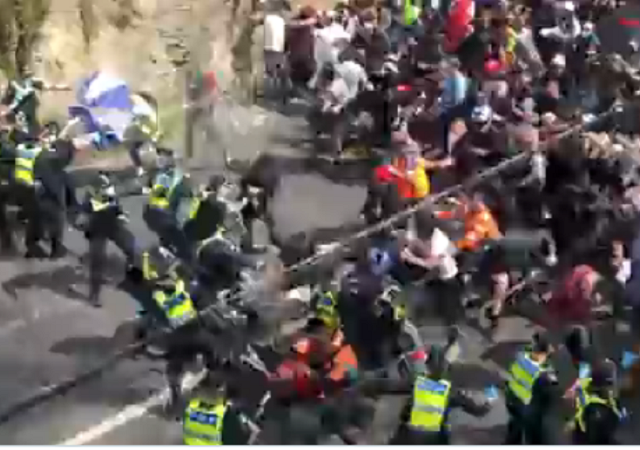 Australia has lost its mind over the WuFlu, or at least its government has. Frankly, it’s rather alarming what the Aussies have tolerated for well over a year with little result.  In fact, the failure of their draconian rules prompted them to end their insane, anti-science “COVID zero” policy.

Here at LI, we’ve been covering the tyrannical crazy Down Under.

Is it any wonder, then, that Australians have lost their confidence in government and their patience with the endless lockdowns and mandates.  Imagine “authorities” reacting to a single case of WuFlu by telling Americans they can leave their homes for only one hour a day for exercise, alone or with one person from their own household, masked,  and told not to talk to their neighbors.  We aren’t (yet) so far gone that significant numbers (and not just in red states) would protest, refuse to comply, and pretty much ignore the crazy.

On Saturday, a nationwide protest hit Australia, and the results were both alarming and heartening.

Of the roughly 700 people who gathered in the city of Melbourne in opposition to continued coronavirus restrictions, at least 235 people were arrested, with an additional 32 people brought into custody in Sydney, according to Reuters.

Video footage shared on social media showed demonstrators at a “Rally for Freedom” in Melbourne breaking through a police line before officers began deploying pepper spray to try to push back protesters.

Fed-up Aussies broke through a police line and rushed forward, outraged by the useless, economy- and soul-destroying lockdowns.

Violence against police is unacceptable. Blame lies with Australia’s leaders. Police have turned into oppressors. Ordinary citizens into snitches. This authoritarian nightmare is causing desperation. pic.twitter.com/uPl3THhBfD

The NSW police on Saturday arrested 32 people, 20 of whom were in Sydney. They said 265 infringement notices had been sent for a host of violations, including failure to wear a face maskhttps://t.co/ACjUXknS2n

#Australia: Over 200 arrested as protesters scuffle with police at #Melbourne anti-lockdown protest

Officers could be seen forming police lines to push back the demonstrators, before spraying foam at those who came too close. pic.twitter.com/Xx629TewhT

It's not just the U.S. The world is up in arms against stupid rules about masks and lockdowns. Here's the latest from Australia. You could have a reasoned debate if masks and lockdowns worked, but they don't. These rules are neo-fascism, plain and simple.https://t.co/Gj02OefNyh

Anti-lockdown protest in Australia. This isn't happening according to the BBC. pic.twitter.com/C2aTm80QXY

I feel nothing but contempt for the Aussie police. Hope your pension is worth it, assholes.

Ivermectin .vs. Covid In A Poor, High-Density State

Ours would do the same if we were disarmed.

They swore, if we gave them our weapons, that the wars of the tribes would cease.
But when we disarmed They sold us and delivered us bound to our foe,
And the Gods of the Copybook Headings said: “Stick to the Devil you know.”

Why not blame the government? The Australian government is not the only government that has over reached. At the end of the day, blame the elected members of Parliament. Oh, and Fauci along with his friends who are playing God should be held accountable!

“We probably have no duty to like Beethoven or hate Coca-Cola, but it is at least conceivable that we have a duty to distrust the state. Thoreau wrote of the duty of civil disobedience; Whitman said, “Resist much, obey little.” With those liberals, and with many others, disobedience is a good thing in itself. In small social entities—English parishes, Swiss cantons—the machine that governs can sometimes be identified with the community that is governed. But when the social entity grows large, becomes a megalopolis, a state, a federation, the governing machine becomes remote, impersonal, even inhuman. It takes money from us for purposes we do not seem to sanction; it treats us as abstract statistics; it controls an army; it supports a police force whose function does not always appear to be protective.”

The various Aussie “governments” really are getting their dictator on aren’t they.

Once daddy (Government) has had a taste of sugar (unfettered power) its a one way street.

good on them–our own revolution started small, on a village green and yet look what happened–hope the aussies succeed in overwhelming/defying these draconian measures–they are a good and honorable people

Note for the interested: Vic has a left-wing government. NSW and the federal govt are both what passes in Australia for right-wing. ScoMo (the Prime Minister) was seen as a fairly conservative figure within the centre-right coalition, especially when he ousted the soft-left-ish Malcolm Turnbull (think Arlen Specter or Susan Collins). This disease has turned them all into dictators.

“This disease has turned them all into dictators.”

Nah…. they were always dictators who looking for an excuse to dictate. And they shall continue to dictate until removed from office.

May God give wisdom to the people to use their sovereignty wisely.