A person told The Sydney Morning Herald the deaths have “distressed” the shelter volunteers because they “had COVID-19-safe measures in place to handle the dogs.” 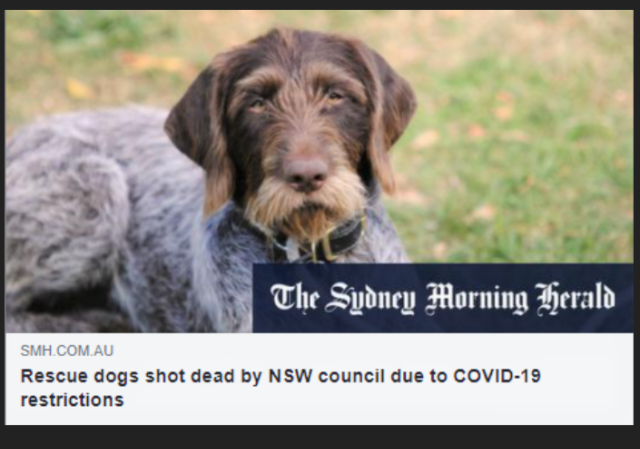 The Bourke Shire Council, located in the Orana region of New South Wales, Australia, voted to murder the dogs instead of allowing people to rescue them:

Bourke Shire Council, in the state’s north-west, killed the dogs to prevent volunteers at a Cobar-based animal shelter from travelling to pick up the animals last week, according to council’s watchdog, the Office of Local Government.

“OLG has been informed that the council decided to take this course of action to protect its employees and community, including vulnerable Aboriginal populations, from the risk of COVID-19 transmission,” a spokesman from the government agency said.

The spokesman said the agency was examining the circumstances of the incident to find out whether companion animal and cruelty prevention laws had been broken.

Cobar is located in central-western New South Wales. It is about 167 miles from the Bourke Shire Council, which is three hours by car.

A person told The Sydney Morning Herald the deaths have “distressed” the shelter volunteers because they “had COVID-19-safe measures in place to handle the dogs.”

One dog became a new mother.

Australia has gone insane over COVID, shutting down the country with minimal cases, deaths, and hospitalizations.

Cobar hasn’t even seen new cases recently. Oh, they found the virus in the sewage system! MUST SLAUGHTER THE DOGS.

To the surprise of no one, the council has not answered The Sydney Morning Herald. Animals rights activists are livid:

The Office of Local Government Minister Shelley Hancock, who has previously faced questions in Parliament over the shooting of animals in council pounds, did not comment. However, animal liberation campaigner Lisa Ryan called for an urgent investigation.

“We are deeply distressed and completely appalled by this callous dog shooting and we totally reject council’s unacceptable justifications that this killing was apparently undertaken as part of a COVID- safe plan,” Ms Ryan, Animal Liberation’s regional campaign manager, said.

Mass hysteria. Lesson here for all.

Covid – unlike small pox, and like other flus – can never be eradicated because it can be carried in animals. The Austrailian government should be overthrow. But – oops -they surrendered all their guns.

‘Covid’ is making a lot more sense now. Good work, China : you seem to have won the cold war.

Americans: when the American Taliban (the democrat and GOPe parties) come for your guns, you know it’s come time to use them.

At least they aren’t shooting people. Yet.

By the way, Mary, it’s perfectly possible to euthanize a dog humanely with a firearm when necessary. It takes precision and care, which I have no reason to assume occurred here.

This is going to end in a civil war in Australia. It should be obvious that their ruling class is simply using BECAUSE COVID is their excuse for literally every power grab they could possibly dream of, and have absolutely no intention of ever giving up that power.

Australia has a population of almost 26 million. Deaths per million from Covid: 38. Cases per million: 1704.

Contrast with the US…

American leftist fascists are green with envy at what their Australian comrades have been able to accomplish using Covid as an excuse.

Austrailia is a mostly homogeneous society. Like Sweden, etc, it seemed natural to trust the government. So they surrendered their arms to it.

Observe, America: it really can ‘happen’ here. And you can bet an attempt will be made by handlers (in particular, Susan Rice) of the coming First Slut to try.

This is not insanity. This is what evil looks like. “Insanity” removes accountability. Evil has no lower bound which is why it must be actively stopped by the actions of good people.

Australia has fallen. It is no longer a free democratic republic.

It is now under leftwing authoritarian totalitarian fascist rule. Once fascists seize total power they do not give it up.

The same is true of New Zealand.

20 years ago, NZ was at the top of the SHTF list of many of my libertarian friends as a possible expat destination. Some had already invested in properties and started the clock on their residency requirement. I shudder to think of the effort and money they wasted.

Since then, I have become more and more convinced that if the USA falls, there isn’t really anyplace left to run.

I did a bit of research on NZ, BITD, it did seem like a possible SHTF destination. But eventually I came to the same conclusion, once the US is done there aren’t any real options left.

The best options I have seen presented have been Poland and Slovakia. Uniform culture, no Muslim welcome mat, totally unwoke. Unfortunately, also 100% unsuitable for the second-language-incapable such as I.

Some people are having way too much fun. What will they do when this is over? Over? Did somebody say “over”? Not happening.

It’s a good thing the Australian subjects are disarmed. Someone might get hurt!

Not fully disarmed but disadvantaged against the police and military. A very good finding from the Bush War in Rhodesia. The Rhodesians successfully used semi-auto on their FNs versus full auto most of the time from Zipra and Zanla forces to save ammo. Eliminating semi-autos from civilians does create an imbalance against semi-auto and full-auto held by authorities. Until the Australian government truly fears the people, this will happen. As for NZ… even worse. They do have plenty of time during lockdowns to learn Chinese as the primary language.

New Zealand is owned by American liberal billionaires who have it set up as an escape from the coming American disintegration. Hopefully, China gobbles them up.

The Covid panic pushers have a great deal to answer for.

Before they get to directly killing people, they’ll probably start burning down restaurants, pubs, etc. to “prevent people from traveling to them”.

Couldn’t they have euthanized them?
It’s very likely they had no one (who didn’t have to travel) who could legally use the drugs to do that. After all, they didn’t have people to take care of them, evidently.

The other factor is that those drugs are usually opoids and tightly controlled. They don’t keep large stocks on hand.

Thought they were Barbiturates?

But you can use Benadryl overdose – available in any drug store.

It has to be a pretty solid overdose. Dogs, in particular require 4-5x the human dose of Benadryl just to get any benefit. We keep a stock on hand to use in case of pet snakebite, which we have to do roughly every other year out here (almost never more than once per animal, thankfully).

This is insanity. If shelter workers want to travel the 3 hours by car to get these rescue dogs knowing the circumstances (which arguably are not dire in Australia to begin with), they should not be prevented from doing so. People must have the freedom to make the risk/benefit analysis to determine their own behavior.

I mention this, because you wonder how they got to where they are at.

To put this in perspective, Russian stock is currently about 40% of the stock available in the US, as US manufacturers have been screwing the pooch for about five years now.

Used to be the left would cry over ANY abuse of an animal real or perceived. Something like this 10 years ago would’ve had the AU’s version of the ACLU all over this crap.