The U.S. women’s soccer team, led by liberal icon Megan Rapinoe, will play for the bronze after losing to Canada, and Olympic hammer thrower Gwen Berry, who turned away from the flag during an Olympic trials medal ceremony in June, failed to medal – finishing 11th out of 12. 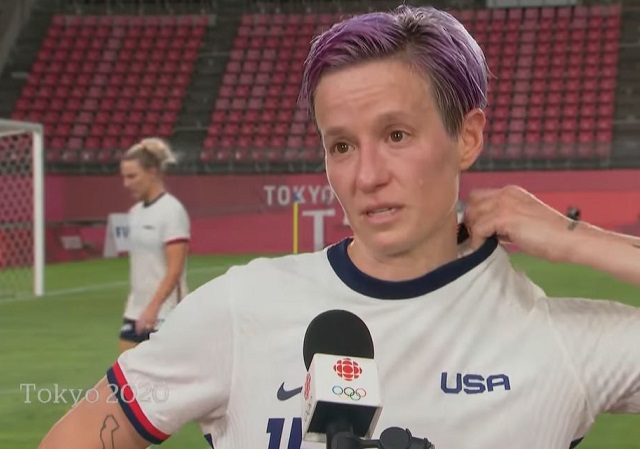 While Olympic wrestler Tamyra Mensah-Stock made Americans proud yesterday with both her historic gold medal-winning performance in Tokyo and the patriotic speech she gave with the American flag draped around her shoulders, “woke” Olympians like the U.S. women’s soccer team and hammer thrower Gwen Berry have not fared too well during the Olympic games.

As we previously reported, not only did the women’s soccer team, led by liberal icon/media darling Megan Rapinoe, lose the first game they played in the Olympics, going down to Sweden 3-0 in an embarrassing loss after kneeling during the national anthem, but they also lost to Canada earlier this week for the first time in over 20 years. Instead of playing for the gold medal, they’ll now play Australia for the bronze.

It was a rather spectacular fall for the U.S. team, who were heavily favored to win it all going into the games.

You’ll recall that hammer thrower Gwen Berry turned away from the American flag as the Star-Spangled Banner played during an Olympic trials medal ceremony back in June where she’d won the bronze medal. She later threw a temper tantrum over the incident, calling it a “setup,” and saying her purpose in going to the Olympic games was to “represent those… who died due to systemic racism.”

Stop playing with me pic.twitter.com/WLN3clqOCM

It was later revealed via a tweet search that Ms. Berry has shown hostility towards other races.

Unfortunately for Berry, going woke and pledging to be an activist athlete as the ceremonies started didn’t help her during her Olympic event. Not only did she fail to medal, but she finished an embarrassing 11th out of 12 after entering the Olympic stadium raising her fist twice:

So it came as absolutely no surprise that U.S. hammer thrower Gwen Berry entered the Olympic Stadium Tuesday night by raising her right fist not once but twice, several seconds apart, to announce that she of all people would be taking advantage of the International Olympic Committee’s relaxed rules allowing freedom of speech prior to the start of play.

Because these athletes are not just representing a sport but their country when they go to the Olympics to compete, it’s not too surprising to see people cheering when the wokesters go down in defeat:

Shout out to self-proclaimed "activist athlete" @MzBerryThrows for coming in 11th place and failing to win a medal at the Olympics after turning her back on the American flag during qualifying in June! Well deserved! pic.twitter.com/U1ZbWqvNPS

Gwen Berry was so offended by Trump's "America First" message that she made sure she got NOWHERE NEAR first place.

Kudos to her for staying consistent https://t.co/rWcJNhyCAg

Gwen Berry won't have to worry about the National Anthem from the podium, because she failed to medal at all. https://t.co/aNHIXtWXmz

RT if you enjoy seeing the US Women's Soccer Team lose!

Americans are under no obligation to cheer for a women's soccer team that hates America.

For the 2nd Olympics in a row now the most famous lauded and absolutely insufferable US women’s soccer team is booted out of gold medal games. Maybe it’s time for new leadership on the team.

The US has become polarized beyond belief. Around the world, sports and football in particular have the ability to unite entire nations.

Today, many Americans are actually *happy* to see the US women’s soccer team lose out on a gold medal.

This Twitter user perhaps summed things up best by pointing out how losing focus can be a recipe for disaster in all things, especially sports:

Great sports teams require focus and team unity, all towards a goal.

Distractions, even minor, can cause you to not be as ready as lesser opponents

The U.S. women's soccer team didn't lose because they weren't the best. They lost because they brought distractions on themselves pic.twitter.com/9fJnMxqzIn

Hard to argue with that.

the soccer team should be playing for iron pyrite…

get woke, go broke. if you despise your country, you have no business “representing” it on the world stage, and should have no expectation of support from the people you’re denigrating.

losers are losers, and Americans despise such: ask George Patton about that. 😎

Maybe they can find another team of 15-year-old boys to bet the snot out of them again.

beat the snot out of

+100 for an appropriate mention of one of history’s greatest generals.

That’s what I’m not so sure of. Would Rapino have her Subway ad campaign if she hadn’t gone super woke?

Or would she instead have instead just been forgotten like the men’s team was?

The hammer thrower placed 3rd in the US team tryouts. Would she have even had a chance at endorsements if she hadn’t made herself notorious?

It’s looking like it’s all just a game for ad money. Make yourself controversial, and watch to woke corps pour money over your head. Pretty disgusting really.

Political congruence (“=”). Diversity, inequity, and exclusion. They think that they can abort the baby, cannibalize her profitable parts, sequester her carbon pollutants, and have her, too. Woke is a double-edged scalpel.

What a shock that putting a lot of time and energy into things that have nothing to do with winning make you lose to people that are actually focused on winning.

I forget which Olympic gold medalist said it (maybe it was Mark Spitz?):

Before you claim Canada had an unfair advantage, Rapinoe is definitely an ugly dude by birth.

Rapinoe is no liberal, nor are any progressives, and should never be referred to as such.

My wife and I traveled all over the northeast with our 3 kids to where ever the woman’s national team were playing. We sat on the ground most of the time with the player’s parents. Picnicked with them after the games. My kids (pre to early teens) adored the players who were their heroes. Watching those now retired players win and celebrate were big parts of their childhood.

I am so glad that team of women were role models for my kids. I would not make the effort after overt politics entered the team

(Puts in a bunch of spaces)

I thought there would be a bunch of spaces.

There is one member of the team who was not a traitor: (Carli) Lloyd has consistently found herself in the minority among the team on the issue of kneeling. USWNT players knelt as the national anthem played ahead of various scrimmages late in 2020 and earlier this year. But Lloyd never joined her teammates, instead opting to always stand with her hand on her heart.

I wonder how the Joseph Goebbels media would react if an American athlete took a knee to protest the stolen 2020 presidential election? Or the unconstitutional detaining of the J6 protestors? Or the violent antisemitism of the Squad? Or the death and destruction caused by domestic terrorist groups like Antifa?

Why, it’s almost as if, the good will, warm wishes, prayers, cheers, praise, love and “good vibes” of fans and country help to fuel victory. How many times have there been stories about the underdog, the outmatched, the over powered, who through hope and the refusal to give up, were victorious in the end?

It strikes me as appropriate if members of the woman’s soccer team are in a parade or other public event, that Americans turn their backs on them.

Or just not show up

You won’t always be the winner, but you can always have a winning attitude.

Attitude-wise, most of these women were losers before they even stepped out on the pitch.

According to Ace of Spades, the canadian team which beat the US womens team had a tranny.

How many people wear false eyelashes to a serious athletic competition? Berry picked a sparsely filled sport to get a platform for photographs, and she failed when she met real competition.

So, is the women’s soccer team really “led by” a man, or did a man force his way in, and destroy the team? The group pictures of the team do not always look cohesive.