Go woke, go broke! Have we learned to make our jobs our first priority? 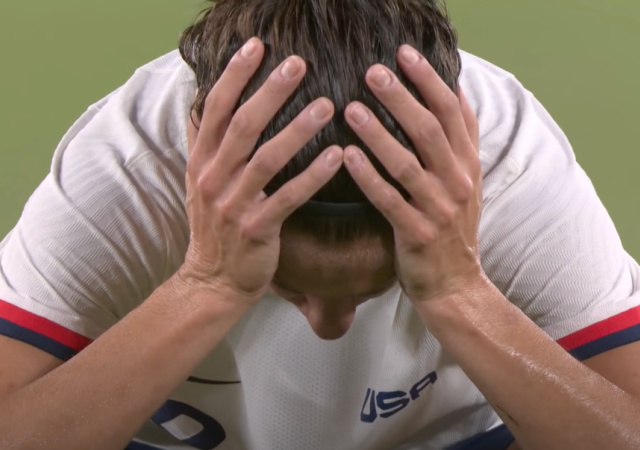 The U.S. women’s soccer team lost in the semi-final against Canada, dropping them to the bronze game.

It’s weird. The world’s greatest women’s soccer team stumbled after causing a ruckus about social justice and pleading for money.

Oh. It’s the first time in 20 years Canada has beaten us. It’s also Canada’s first time to the gold medal game after winning the bronze in 2016. They’ve never placed higher than fourth place in the World Cup.

Canada converts the penalty to take the lead. #TokyoOlympics pic.twitter.com/r856yMXjIb

Canada converted a penalty kick at the 74th minute.

I guess some people consider the penalty controversial, but the refs had the right call.

Maybe they should have scored a goal? They had possession 56% of the time while Canada only had 44%.

The U.S. also had six shots on goal. Canada only had two shots.

Sweden demolished the U.S. 3-0 in the first match of the Olympic games. The U.S. won the next matches, but barely and looked lethargic throughout them.

The women beat New Zealand but tied with Australia. They had to beat the Netherlands with penalty shots in order to make the semi-finals.

I always cheer for America, but I’m meh on this.

The U.S. women’s team got recognition after they won the World Cup, but quickly ruined it with their protesting and whining about money.

I don’t believe in coincidences. A crash and burn like this after spending so much time concentrating on everything except soccer is not a coincidence.

Our women’s soccer team should have dominated every single match during the Olympics.

You do not have to stop protesting, but maybe, just maybe, make your job your main priority.

Since WOKE was more important than talent how about you just defect.

Hey equity works when everyone loses cause having one winner goes against the ideology of everyone is a winner because they participated. Enjoy that participation trophy USWNT! But I digress…..

Literally everybody in the world except the far left loons is united in laughing at the woke women’s team getting trashed. And now we’re all looking forward to them possibly losing the consolation match and not even getting a medal AT ALL.

Just like Trashernic, too much time whining about woke bullshit, not enough time practicing your ACTUAL JOB.

If I may offer an effective reply to Team Lefty Losers,

More importantly, most will lose endorsements, and wind up competing for work with illegal immigrants. Oh my how wonderfully liberal progressive is that ?

Assuming facts not in evidence.

You’re talking about subway, one of the original pillars of obviously fake healthy food since before the surge of it…just look at all of their employees that work there more than a year…might as well be a pizza hut.

Fake unapologetic toxic Rapinoe is a match made in heaven for subway.

Honestly, I suspect they started the woking because they didn’t really think they were up to winning the gold.

Being super woke keeps them in endorsement slots even when they fail to even place.

Note that no-one’s talking about the US men’s team winning the Gold Cup a couple days ago? Soccrr’s just not that big in the US, but wokism is the ticket to sponsorships.

Let’s hope the defect to the country they really love and admire – China.

Carve out a little country for them… Wokestan. Just make it on the other side of the planet.

Who can actually play soccer.

The culprit is Rapinoe for shoving her politics down the throat of everyone else.

Hopefully, they will turn on her. She deserves the acclaim.

They were all in on it, she was just the loudest

No. That MIGHT have held water at the start, but at this point they’re ALL to blame.

If a loudmouth on the team is spouting bullshit that the team doesn’t agree with, then they speak out. And the fact that almost all of them went along with this kneeling bullshit says that they ALL agreed with it and were happy with Rapinoe speaking for them. Only a couple refused to partake in the kneeling, and none of them spoke publicly.

Plenty of teams of both sexes in the past have gotten rid of loudmouths (no matter how talented they might be), because they compromised team cohesion and performance at the team level.

ALL of the members were content with Rapinoe on the team being a loudmouth.

Rapinoe is a symptom, not the cause.

Yep. And the rest of the team went right along with it instead of telling Rapinoe to lay off the woke shit and concentrate on their soccer game. So they all got exactly what they deserved.

Now that these losers have thoroughly defiled themselves, perhaps they’ll disappear and let some real female athletes represent the country.

Since the Olympics have gone woke, next time just take some of the better male players and let them identify as female.

Playing politics instead of the game, maybe they will get a participation thropy.

Maybe they were very lucky the first time they managed to win.

They Spent too much time planning what they were going to do once they got onto the Gold Medal Podium and not enough time playing the game.

I used to shoot competitively, both solo and as a part of a team. One concept that was drilled into us, was focus.

During practice sessions, and especially on the weekend of the match, you have to have a single-minded focus on what you are doing, and what you want to achieve.

In other words, put on your game face and leave your personal bullshit at home. You are here for ONE reason.

Looks like that concept was thrown out the window with this team, and the result is predictable.

Looks like a pay cut would be in order now.

That would be the perfect karmic justice, given Rapinoe’s history of bitching about pay equity.

Never thought I’d root for our own athletes to lose, but in this case I like doing it.

Same here. The whole thing has devolved into an anti-American freakshow.

It’s brought fun into this Olympics.

I’ve said it before but I’m fairly certain actually playing soccer hasn’t been the point of the US Women’s Soccer Team for quite some time.

I believe in equal pay
When is the Dallas 15 boys team going to get equal pay?

In most cases, this would be a humbling experience, but most of the women on this team seem incapable of humility at the moment. USA soccer would be wise to excise the cancer, aka Rapinoe.

Rapinoe is a symptom of the cancer, not the cancer itself. 95% of the team went along with the kneeling bullshit.

The cancer is wokeism. Rapinoe is simply a loudmouth symbol of it, but by all appearances the disease runs DEEP in the entire team and coaching staff.

But it’s an American tradition to throw a ringleader (or at the very least, a fall guy) under the bus pour encourager les autres.

I don’t believe radicals like these are capable of reflection. They will blame this on Trump, sexism and climate change. Anything but themselves.

That comes of not allowing 15 year old boys on the team.

Would have been even sweeter if they lost to a nation like Nauru, Kiribati, Tuvalu, or Lichtenstein.

Or the Jamaican Soccer and Bobsled Marching Society.

But they lost to a team with a trans athlete from Duke U. I don’t know what to do. Only kidding. I’ll root against them and hope they lose next game.

Clearly the team was distracted from their purpose: winning. All the woke posturing and BS individual brand building cost them support and their losses will cost even more.

Pride goeth before destruction, and an haughty spirit before a fall. (Proverbs 16:18)

I blame…er…(cough)…uh…racism and the unvaccinated.

Maybe next time the US can send a group of women who are proud to represent their country. Suspect that might make a difference.

Pro tip: Don’t take a penalty that gives the opponent a penalty shot.

The victorious Canadian team has a “trans” player:

How embarrassing! Not only did the Canadian team outscore the American team, they out-woke them as well.

Fun Fact: Their case got thrown out of Federal Court once it was proved that they ALREADY earned more than the Men’s team (despite drawing far smaller crowds, TV audiences, and therefore revenue) on both a per season and per game basis.

They have now started a new case arguing, ludicrously, that despite being already paid more than the men they should be getting paid yet more because reasons.

It couldn’t happen to a nastier bunch.

The solution is to embrace trans people and recruit a men’s professional soccer team and have them pretend to be women for the gold!

Exactly right. Being so “woke” means that they can’t even complain when they are replaced by 6’5″, 280-pound “women with penises.” After a few collisions on the field, they’ll be hauling the real women off in stretchers.

I wonder when we will see an ad campaign “everything is better with a penis.”

Right now our local transportation department has bus benches with the placard “don’t be a drag, wear a mask” featuring a drag queen entertainer. Never has an advertisement been more ripe for a quick alteration. Does no one think more than 15 seconds into the future anymore

A classic case of starting the run downfield before catching the ball.