“Berry’s best throw of 71.35 meters was nowhere near the winning result.” 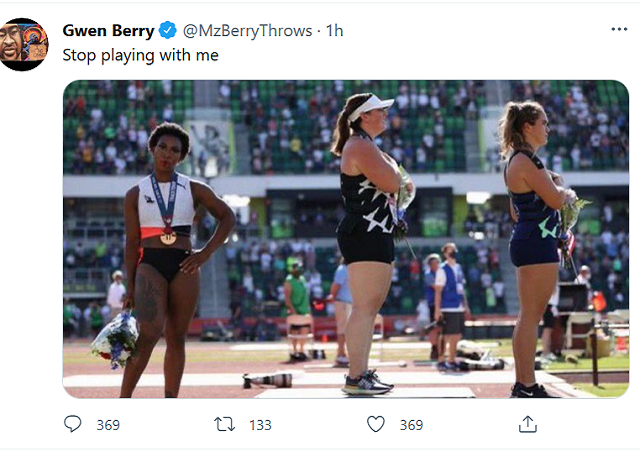 Hammer thrower Gwen Berry hit the headlines during the June Olympic trials. She turned away from the American flag and said she was “pissed” that the “Star Spangled Banner” was played while she stood on the podium for a bronze trial medal. She falsely complained that she was “set up.”

Berry will not be put in the untenable position of standing on a podium in Tokyo while the anthem of the country she ostensibly represents plays because she placed 11th . . . out of 12. A very embarrassing showing.

The self-described “activist athlete” finished 11th out of 12 in the women’s hammer throw final on Tuesday, and was the worst-performing member of the U.S. team. DeAnna Price and Brooke Andersen, who did not protest the national anthem at trials, finished 8th and 10th, respectively.

Berry’s best throw of 71.35 meters was nowhere near the winning result. Anita Włodarczyk of Poland won the event with a toss of 78.48 meters. The gold medalist did not protest the Polish national anthem on the Olympic podium. In fact, she seemed rather excited to be representing her country on the world stage.

. . . . Prior to competing at the Olympics in Tokyo, Berry had pledged to “represent the oppressed people” if she won a medal at the games.

Thankfully, we have been spared that anti-American hot mess spectacle on a world stage.

In June, Berry declared, “My purpose and my mission is bigger than sports. I’m here to represent those … who died due to systemic racism. That’s the important part. That’s why I’m going. That’s why I’m here today.” Her humiliating showing in Tokyo suggests that she would do well to put a little more energy into her sport and a little less into her “mission” to represent a nonexistent fantasy.

Meanwhile, America is proud to celebrate the Olympic victory of America’s Sweetheart, Tamyra Mensah-Stock, who earned the gold in women’s wrestling and is just as proud to represent the United States of America as we are to have her do so.

11th rate, that sounds about right 🙂 I am laughing at her, now we all know that she is good for nothing.

The hope was that she would finish 13th.

Well, whomever she is, I’m sure she’s made her people proud, who ever they may be.

Personally I was hoping for her to finish dead last, but this will do.

In life, she will rank near the bottom.

What I have learned is that these type of people have some kind of mental problem. If you search the internet for pictures of this woman, she always shows up with some weird clown makeup on her face, designed to draw attention. Gigantic fake eyelashes, etc, No doubt this woman is in need of some therapy.

Therapy? Absolutely. She is more vigorous example of the attitude displayed by ‘modern’ women. In sum the modern women demands that she remains upon the 1950’s traditional pedestal of femininity while displaying masculine traits. IOW high maintenance.

To be clear not every woman. But for a subset. These are the women who in their 20’s and early thirties deferred or delayed marriage to pursue a career or to maintain their sexual freedom. Nothing wrong with that but they would have dropped the career track in a heartbeat had the right man come along; handsome, rich and willing to overlook her flaws or meet her very high wishlist of needs.

So they repeatedly lie to themselves that they deserve better. That the world isn’t fair because the rich handsome man of their dreams keeps choosing a younger woman who was willing to go the traditional route and start a family in their childbearing years.

Now these women are in their late thirties or early forties and can’t understand why they can’t find a man who will marry them. They consistently over rate the value they bring to the table. Kind of like a past their prime athlete who demands a pro bowl salary but hasn’t been in the pro bowl for five years.

“So they repeatedly lie to themselves that they deserve better.”

While she is getting some of what she deserves.

Such a pity she beat someone.

“My purpose and my mission is bigger than sports.”

I hope so, because the sports part of it sucked.

I am expecting that she will do an Abrams, and insist that she really won.

And demand 8 equity meters be added to her score.

Oh! Eleven of Twelve! I thought we were talking about Seven of Nine!

The Collective deems her unsuitable for assimilation.

Merit is a harsh mistress. It is horrible to be judged by your performance not your victim index.

Expected something like this. The movies push performative wokeness when they know the movie sucks as a way of sucking in politics dollars.

Was suspecting she was taking a look at her real chances and decided to do some performative wokeness to lock in some sponsors before she bombed out.

Kharma strikes again. If enough people resent you and what you represent, it is inevetable.

My question is why she was chosen to represent the USA, when she openly said she had no intention of doing that. It’s like engaging a celebrity to endorse your product, when they say openly that they hate your product, will not say nice things about it, and will trash it at every opportunity. You say “Thank you for your honesty”, and you look for someone else. You don’t engage them anyway!

Indeed it is not that hard to join a foreign country’s Olympic team. There are about 50 African countries not on the Mediterranean that could qualify as “her people.”