Dexter Van Zile: “I was shoved, spit at, called a bitch, a Nazi, a pig, and doused with water”

We’ve written a ton on SJP’s antics throughout the years, including in: 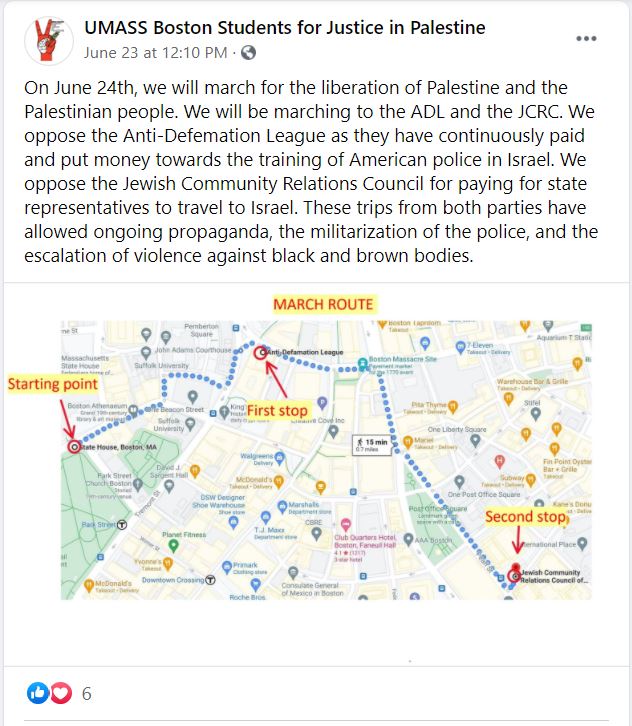 But when participants suddently noticed that there was a Zionist in their midst—my friend and former colleague at the Committee for Accuracy in Middle East Reporting and Analysis (CAMERA) Dexter Van Zile—the event took a far more menacing turn.

Dexter, who is Christian, is a well-known supporter of Israel. As the mob of anti-Israel protesters decided they wanted to punish him for daring to show his face, two of Dexter’s CAMERA colleagues caught the harrassment on film.

In a June 30 article in the Times of Israel, Dexter described the experience:

Last Thursday, June 24, 2021, I was publicly humiliated and scapegoated at a rally organized by the UMASS Boston Chapter of Students for Justice in Palestine, (SJP). More to the point, I was shoved, spit at, called a bitch, a Nazi, a pig, and doused with water at a rally organized by a student organization supported with funds collected and distributed by the Commonwealth of Massachusetts.

… At this rally, Nino Brown, a Boston school teacher associated with the Jericho Project, an organization that promotes a black radical separatist agenda in the U.S., demonized the United States and Israel, shouting, “F—k your police state, America was never great,” and referring to Israel as a “parasitic entity” during his speech. 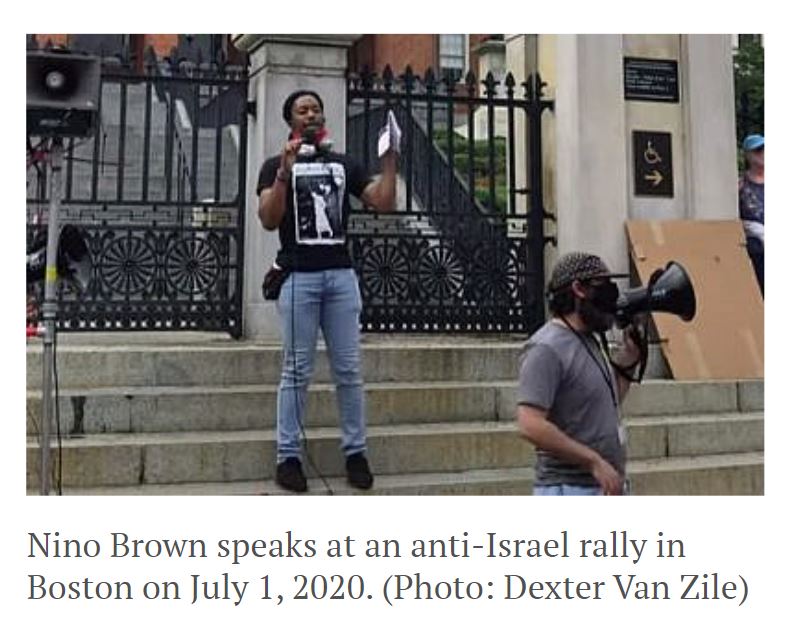 [Note: This is a screenshot of Dexter’s own photo of Brown from a similar 2020 anti-Israel rally.]

I wrote a number of articles about Brown’s rhetoric in the weeks after last year’s rally and it was clear that these articles were on the top of his mind during his talk at last Thursday’s demonstration on the steps of the State House.In addition to declaring that Israel was a “cancer to the Middle East” and that July 4 (which he referred to as the “Fourth of You Lie,”) is the “Nakba” for African Americans, he warned of enemies afoot at the rally. These enemies are present, he said, “to report and spread their baseless propaganda.”

That was a clear reference to me and two of my colleagues from the Committee for Accuracy in Middle East Reporting and Analysis (CAMERA) who were at the rally to see what Brown and others had to say.

…[T]here was a commotion in the main crowd as Nino Brown got ahold of the megaphone. [Note: You can see Dexter’s recording of Brown’s speech here or below.]

“Dexter Van Zile’s here in the crowd,” Brown said. “He’s a rabid Zionist with this group called CAMERA.” Boos and shouts of “Shame!” resonated in response. Brown went on to declare that while the crowd was out exercising its right to free speech, others were there posing “as friends under the guise of journalism only to smear and muckrake on our righteous movement.”

He then started a chant of “Zionist Go Home!” to get me to flee the scene. In response, I chanted “Am Yisrael Chai” a few times just to let them know that there was another side of the story.

It wasn’t something they wanted to hear. Later one of my colleagues asked me, “What prompted you to do that?” It seemed obligatory.

The declaration that the people of Israel live elicited a rage from the crowd. A young woman emptied a bottle of water on me, another spit on me. Others called me a Nazi, a bitch, a f—–g pig. An African American man in a yellow vest told me I had “f—–d up” for not leaving when told to and at one point, I was told I had offended people in the crowd by uttering the word “Israel.”

Dexter summed up their purpose in targeting him:

I am not a Jew, but what happened to me last week on the streets of Boston, my home for the past 20-plus years, is part of an ongoing campaign designed to drive Jews out of civic life in the U.S. This is not about Israel, but Jews. And it’s not just about Jews, but about undermining the rule of law and poisoning inter-group relations throughout the country — using public funds. It’s a recipe for disaster and the people who run the city are asleep at the switch.

Dexter’s harrowing account goes on; you can (should!) read the entire piece here, peruse further news coverage of the rally’s hateful content here and here, and you can even watch Dexter’s own footage of the barrage of harrassment below.

Though the experience was clearly an unpleasant one, we have no doubt that it will not deter Dexter from continuing to exposing the bigotry, violence, and illiberalism of SJP and its allies.

Like the finger gesture there, nice touch from the insane

It would be funny to mingle in that crowd with a map and ask people to point out where on the map is Israel and the Gaza Strip.

They use bad language. Not my crowd.

The message they are sending is: Don’t openly oppose the Red Guard. They can and will get violent.