Tufts Students for Justice In Palestine and other anti-Zionist groups pushed through a false ‘Deadly Exchange’ resolution seeking to blame Israel and American Jewish groups for domestic U.S. police killings of blacks. 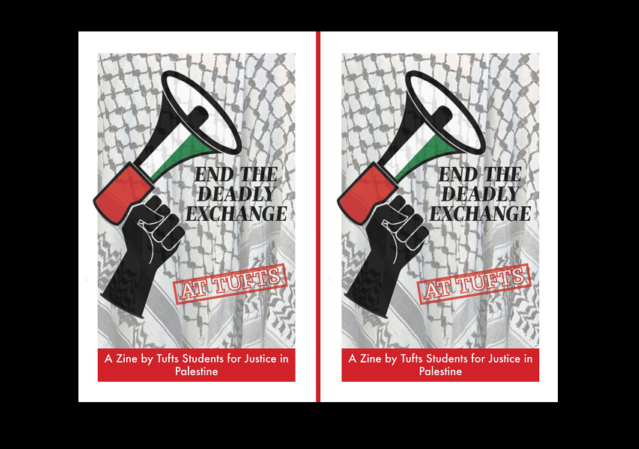 The Tufts University chapter of Students for Justice in Palestine (SJP) has proven itself to be one of the strongest advocates of “Deadly Exchange,” a false campaign started by anti-Zionist Jewish Voice for Peace, claiming that Israel and American Jewish groups are responsible for alleged unlawful police violence in the U.S. against minority communities. Tufts SJP reframed this campaign by claiming Israel directly threatens the “safety” of students by “militarizing” and training American campus police to be racist.

Though Tufts SJP has spent the past several years diligently spreading Deadly Exchange propaganda, and even engineered the passage of a November 2020 student government resolution endorsing the campaign, university administrators have made it clear that they feel differently.

In the wake of 2020’s police killings of George Floyd and Breonna Taylor, and the resurgent Black Lives Matter and Defund the Police movements, Deadly Exchange has enjoyed a new momentum.

Pioneered by the extremist group Jewish Voice for Peace (JVP), the Deadly Exchange campaign builds on old, anti-Semitic tropes (inspired by the notorious forgery The Protocols of the Elders of Zion) alleging a shadowy and powerful Jewish cabal that seeks world domination. According to Deadly Exchange, Israel purposefully exports police racism and violence to the United States in an effort to preserve and spread its own so-called white supremacist, capitalist, imperialist system; it is Israel that is (knowingly) behind police killings of Black Americans.

We’ve covered the Deadly Exchange lie extensively, including in:

At Tufts, Deadly Exchange has proven popular among anti-Israel students.

Since at least 2018, when the group discovered that the now-retired TUPD chief Kevin Maguire had attended a nine-day counterterrorism and emergency preparedness seminar in Israel in late 2017, Tufts Students for Justice in Palestine (SJP) has (in such a stretch that the group seems in danger of pulling a muscle) adapted the Deadly Exchange by claiming that TUPD’s tangential association with the Jewish state directly threatens Tufts “students’ sense of safety and security on campus“; Tufts “students of color” are in particular danger. TUPD, SJP concludes, requires “demilitarization” and a prohibition on any relationship with Israeli counterparts.

At the time of McGuire’s visit to Israel, the university’s Executive Director of Public Relations, Patrick Collins, explained that the trip was allowed in order to help University public safety personnel

“…prepare for, prevent and respond to all types of emergencies. Terror attacks in cities throughout the U.S., including Boston, and on college campuses, such as Ohio State University (OSU), have demonstrated the need for local and university police departments to prepare for potential terror attacks and to know how to prevent and respond to them,” Collins wrote, referring to a Nov. 2016 stabbing incident at OSU, for which ISIS claimed responsibility. “The ADL seminar, which was cost-free to participants, was a valuable source of information that will enhance the university’s readiness to address emergency situations.”

All this was evidently displeasing to Tufts SJP; members of the group signed a letter to the university administration complaining about McGuire’s excursion. According to the Tufts student newspaper, the Tufts Daily,

Two hundred and one members of the Tufts community, including 39 faculty and staff members, 111 students, 47 alumni and four community members…expressed their concern over Maguire’s recent trip to Israel for a National Counter-Terrorism Seminar (NCTS) training. Associate Professor of Anthropology Amahl Bishara drafted the letter, circulated it, garnered signatures and sent it in an email on Friday.

[The full text of the resolution on the November 24 Tufts student government ballot, as published in a November 24 SJP op-ed]

Our referendum is seeking to promote the safety of students (especially POC students) by demanding the Tufts administration prohibit TUPD officers from attending military-led and/or similar international trips in the future, refine the vetting process to prevent prior attendees from being hired, and apologize for sending the former Tufts police chief to a militarized training trip. 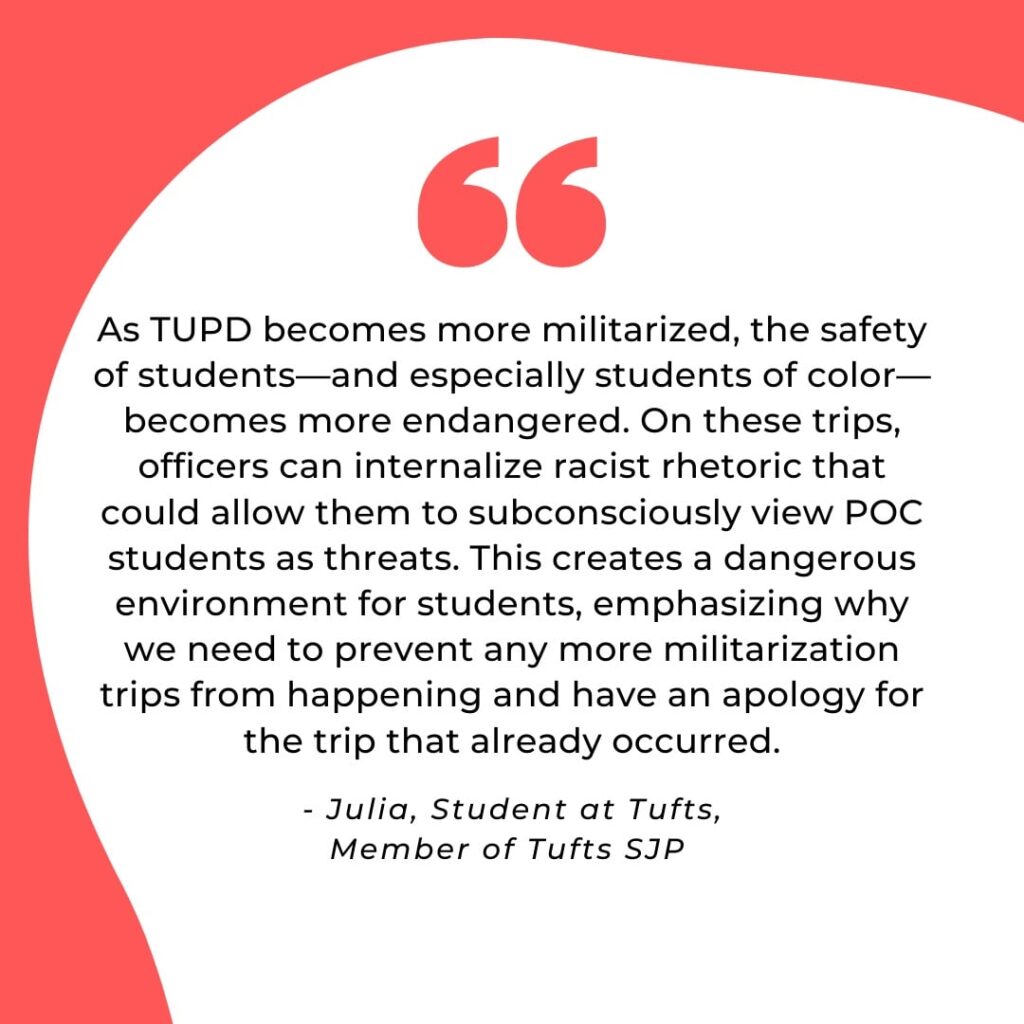 [A graphic Tufts SJP posted to its Facebook page]

Under the guise of “counterterrorism,” participants have learned Israeli military tactics for intelligence gathering, border security and forceful suppression of protest…

As with other iterations of the Deadly Exchange campaign, Tufts SJP’s case for the conspiracy theory is less than convincing; the group’s November op-ed cited a lone, fawning Al Jazeera article about Deadly Exchange as support for the contention that Israeli “counterterrorism” is a smokescreen for racist indoctrination. (Naturally, the Al Jazeera article SJP used quoted only JVP and allied sources.)

SJP also produced an online “zine” elaborating on its campaign. Linked on multiple Tufts SJP social media pages, the “zine” features multiple historical inaccuracies and does its very best to erase Jewish connections to the land of Israel. For instance, the document refers to Hebron—for thousands of years, regarded by Jews as the second holiest place in the world (second only to Jerusalem)—as a “Palestinian city with internal Jewish settlements”.

The “zine” also includes a hand-drawn map of the modern state of Israel in which the entire country is labeled “Palestine” and “occupied territory.” 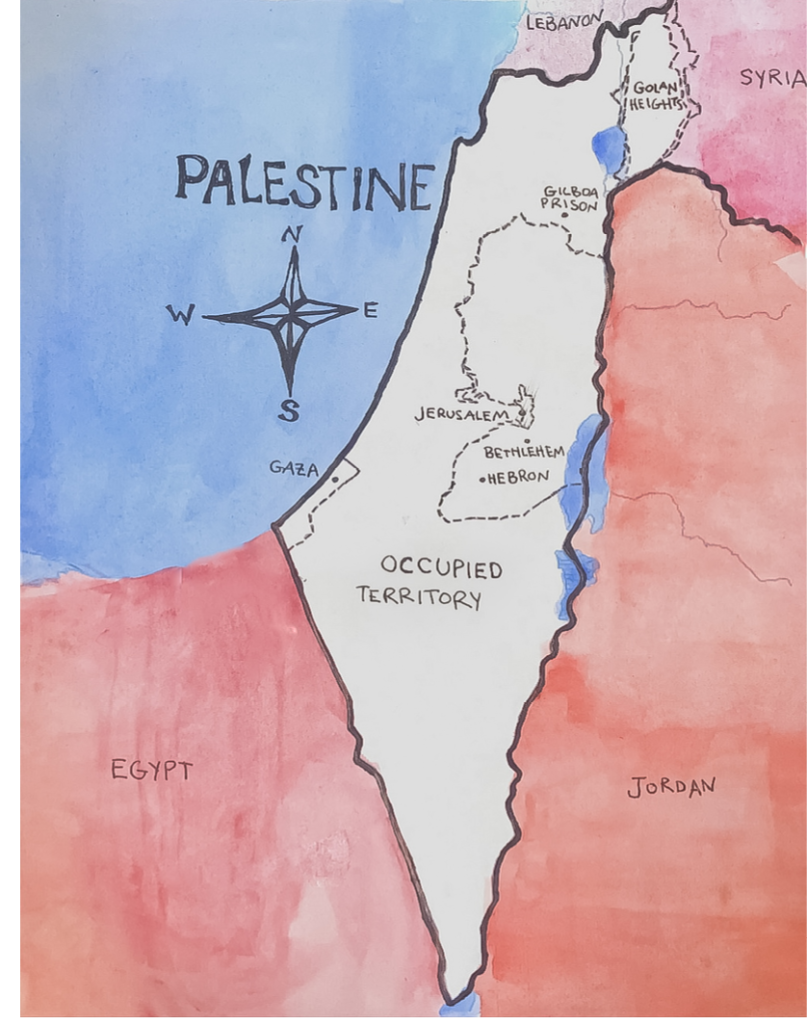 You can see the entire “zine” here or below (and see this post’s featured image for a zoomed-in copy of the “zine” cover).

Meanwhile, and throughout the wealth of material it produced to bolster its Deadly Exchange campaign, the very worst consequences SJP could (tenuously, at best) attribute to Chief McGuire’s whopping nine days in Israel years ago were extra training in the use of firearms and the presence of more personnel trying to ensure that community members abide by COVID safety regulations. Moreover, SJP and its coalition failed to identify a single case where TUPD’s so-called “militarization” resulted in physical harm to any Tufts student.

Still, SJP applauded its own efforts in multiple public posts on social media, placing the campaign and its supporting coalition in the tradition of other “abolitionist movements”. 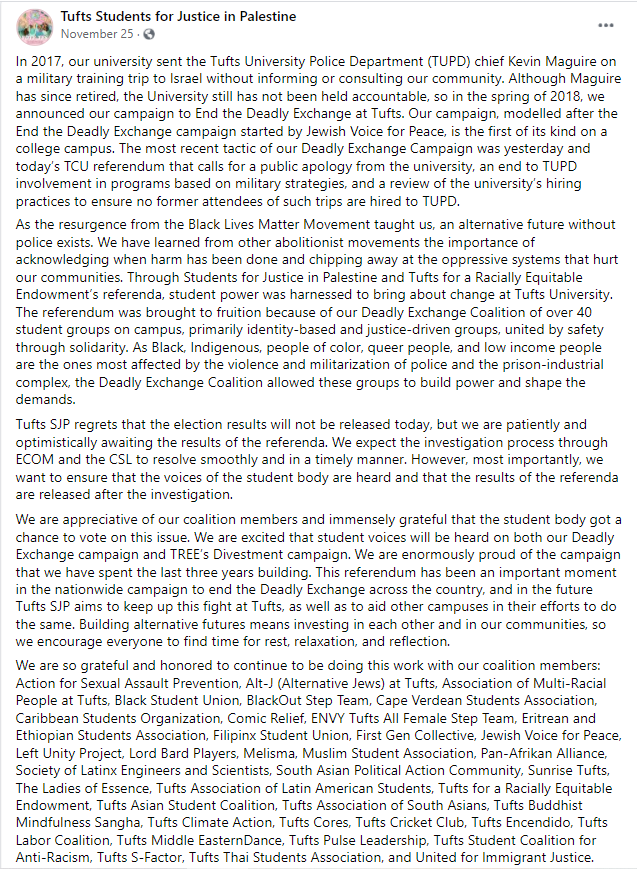 Naturally, Tufts SJP trumpeted the vote on social media, calling it an “enormous victory in our struggle against white supremacy and militarism on Tufts campus and globally.” (See the full statement here.)

But for all of its self-proclaimed success, SJP’s gleeful encomium inadvertently revealed the group’s history of material failure; indeed, SJP’s statement praising its most recent resolution’s passage also included a pledge to “continue to push Tufts administration” to finally “adopt the changes specified in the Boycott, Divest, and Sanction resolution passed in 2017″—a similar but separate SJP-orchestrated student government resolution that (even according to SJP) had no effect on Tufts officials.

Likewise (though Tufts SJP has largely neglected to acknowledge it) the Tufts administration flatly denounced the Deadly Exchange resolution mere days after news of its passage emerged.

Patrick Collins — the executive director of media relations at Tufts University — told The Algemeiner, “We are disappointed in the result of the referendum, which mischaracterized the university’s approach to public safety and policing.”

“The university will not be taking action in response to the vote’s outcome,” he added.

Collins also criticized the referendum itself, saying, “While we respect students’ right to make their voices heard on this or any issue, we believe the referendum was misinformed.”

Now, as the spring 2021 semester approaches and the Tufts administration remains unmoved by SJP’s disgust for university police, it seems the group will have to find a new way to cast its angling for Israel’s destruction as a moral imperative; Tufts’ Deadly Exchange coalition has not been “victorious” after all.

It’s not madness – it’s fascism. And sexual deviancy on a Nazi scale.

A LOT of money and power is at stake. This is just more in a giant scam to gain it. But a lot of sexual deviancy helps drive it.

Americans were turned into neurotics and sexual oddballs by virture of our corrupt media and corrupted schools – and finally, by Mr. Weirdness himself, obama. It served a very broad purpose: it has allowed the masters of the left (read: China) to create an epidemic of sado-masochism on every level of society and government.

The useful idiots fo the left are the masochists, and their handlers are the sadists – except before the ChiComms, where they become masochists.

When any masochist, on any level, is denied masochistic company by any peer, they will become the most rabid of infantile sadists. Just look at the assholes with the loudest mouths in hollywood – they are the most illustrative examples: they revel in bending over for any government horror (if it’s from their handlers), but look how sexually excited they get calling for the demise of a Trump supporter: There is no better example of this than a freak like Debra Messing. It’s as if she’s climaxing as she’s sending her insane tweets.

Then there are the Grenchen Whitmers: a sadist of frightening proportions. (Imagine the sexual weirdess that must go on between her and her husband? Dig through his drawer and you’ll finda Xi Jiping mask and a whip. Their rituals probably excite the sadist in her, whereby she can’t wait to get in front of TV cameras and revel in her oppression of the people under her control in Michigan.)

And then there is Cuomo, Mr. Nipple-ring himself: literally a mass murderer of thousands and thousands of people. Like any SS freak from WW2, he coudln’t have enjoyed himself more, and like any serial killer, is sexually gratifyed with the though of those thousands of helpless, suffering people wheeled into death warehouses en masse. But watch how he bends over for his master, Xi Jingping. Then there’s Chris Cuomo, his Goebbels, a pathetic, preening narcissist, who you can be sure has gratifyied himself may times over the fact that he was instruental in supporting that mass killing.

Watch the infamous confessions of the BTK killer in court: you’ll you’ll seek a very blatant example of how proud a sadist can be of their ‘work’:
https://www.youtube.com/watch?v=BvWOje46Xp8

Encouraging to see adults remain in control of Tufts U. Personally, I’d love to see something a bit more strongly worded from administration, but baby steps, I guess.

More and more, my ideas of apprenticeship with big employers shows more and more promise. Regular readers I’ve heard mistake this before. Actually, for small employers as well. I won’t live long enough, but I wonder if the day will come to universities will become a relevant.

If Arab Squatters received justice, we would never hear from again.

There you go… Noticing Things.

That doesn’t count, because those black on black killings must amuse or gratify certain people in key positions.

The democrat party is a house of freaks, paid or otherwise.

I am in constant awe of how the police can kill all these “persons of color” without anyone finding any bodies or other indicia of the events. They even seem to be able to find persons who are not missed by people close to them (or happy that the person has not been around for a while).

Black people are the leading detriment to black people’s longevity.

Hypocrisy among blacks is even greater then their outrageous crime rates.

Reading about how much currency, deference and legitimacy these transparently contrived, fallacious and vicious jihadist propaganda narratives are granted by Dhimmi-crats, media and gullible dhimmi Jew-haters in academia makes me absolutely disgusted and angry. These people are vile and evil.

You have to be quite a sucker to send your children to a public or private school infested with garbage like this:

More and more it is beginning to look like Obama’s 3rd term.

When will people realize that blacks killed by police caused their own deaths?