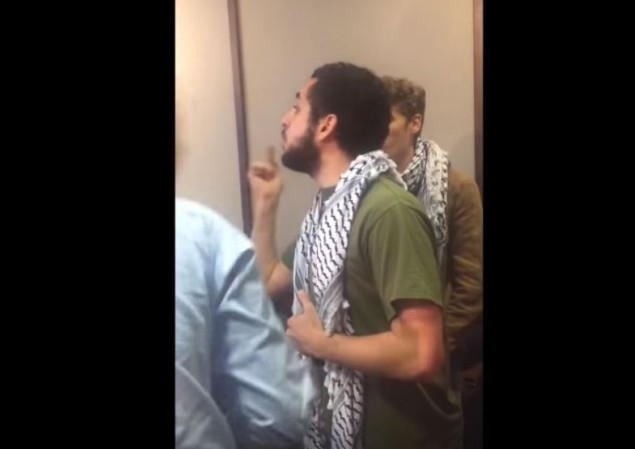 The students who disrupted a UT-Austin Israel Studies event hosted by Professor Ami Pedahzur have gone on the offensive, filing a “civil rights” complaint with the University.

The disruption was carried out by the UT-Austin Palestine Solidarity Committee (PSC), led by law student Mohammed Nabulsi, who also is a leader of the Boycott, Divestment and Sanctions (BDS) movement on campus.

Despite my requests both to the University and the students’ lawyer Brian McGiverin, I have not received a copy of the complaint. But the nature of the charges has been explained in press statements issued by the students and McGiverin. 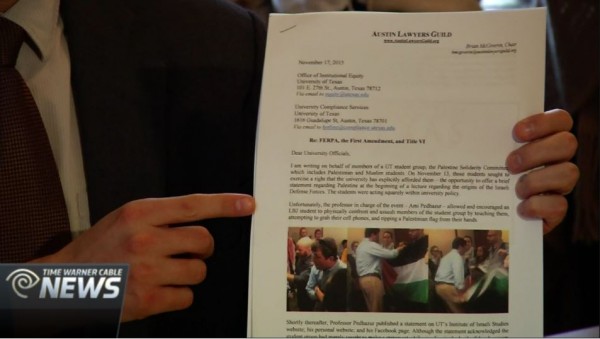 After the event, Pedahzur released a statement about the incident on an official UT website – that was later removed – and on his website and Facebook page. In it, Pedahzur compared the incident with the latest Paris terrorist attacks, saying, “Less than 48 hours after the horrific attacks in Paris, I feel that it is my responsibility to ask you to join me in an attempt to confront the radicalization process on campuses and to protect students, staff, and faculty members from intimidation and violence.”

“Drawing a connection between students’ attempt to practice their First Amendment right through expressing their opinion about a political matter, such as the Israeli-Pales­tin­ian conflict, with what happened in Paris is outrageous and dangerous,” McGiverin said.

After Pedahzur’s statement, PSC members have been avoiding being on campus; some have “received multiple threatening messages and comments,” according to McGiverin. “We are worried about our safety,” Nabulsi explained, “since we were referred to as ‘red flags for terrorism.’ People take a professor’s words seriously, so they might act on it.”

In his statement, Pedahzur also accused students by name of extremism.

“It is the scariest thing for a Muslim to be labeled as a terrorist, especially in the anti-Muslim climate of Texas,” said Nabulsi.

At a press conference on Tuesday, Nabulsi said Pedahzur had “defamed my character and insinuated that my political expressions are red flags for terrorism.”

“At a moment when anti-Muslim, anti-Arab sentiment is at a high, not only are his statements bigoted and hateful, but they have also endangered Muslim and Arab students on this campus, affecting our right to an education free from discrimination.”

Claims by Nabulsi and other UT-Austin PSC students that their motives and goals are misrepresented are not new. In an April 22, 2015 article in the student Daily Texan, After weeks of debate, UT SG votes against divestment resolution, Nabulsi made the charge:

The resolution was based out of a national boycott-sanctioning-divestment, or “BDS,” movement started by Palestinian human rights groups. Nabulsi told the Texan on April 9 that Unify Texas, a student organization opposing the BDS resolution, does not understand the BDS movement.

“Unify Texas relies on a mischaracterization of BDS and our goals here on campus in order to make a straw man argument,” Nabulsi said. “BDS is a step towards leveling the negotiating playing field so that the Israeli government is forced to take Palestinian demands seriously.”

But was it really unjustified — much less legally defamatory — for Prof. Pedahzur to express a concern about what was happening in Paris after the UT-Austin PSC students screamed at him that they wanted an Intifada?

There are facts which do not appear to have been discussed at the press conference, at least according to news reports.

Prof. Pedhazur, in a statement he had posted online, indicated that he felt the need to address the situation publicly because he learned that two of the students involved used online alias of terrorist names:

It is important to pause here for a second and underscore the fact that Mr. Nabulsi’s online name is Georges Abdallah, of the Lebanese Armed Revolutionary Factions who murdered American Lieutenant Colonel Charles R. Ray, and Israeli diplomat Yaakov Bar-Simantov in Paris, France in the summer of 1982.

After some more research we learned the Nabulsi was not the only member of the group who assumed the identity of a murderer online. For example Mr. Patrick Higgins, a former student in my graduate seminar, who recently completed his MA in Middle East Studies, refers to himself as Edward Despard a British officer of Irish descent, who  radicalized, joined the Irish rebellion and plotted to assassinate King George III.

When I first wrote about this, I noted that the Facebook account of “Georges Abdallah” was not active and I could not confirm whether the account was used by Nabulsi. One post was still in Google Cache, though, for the Boycott Israel group: 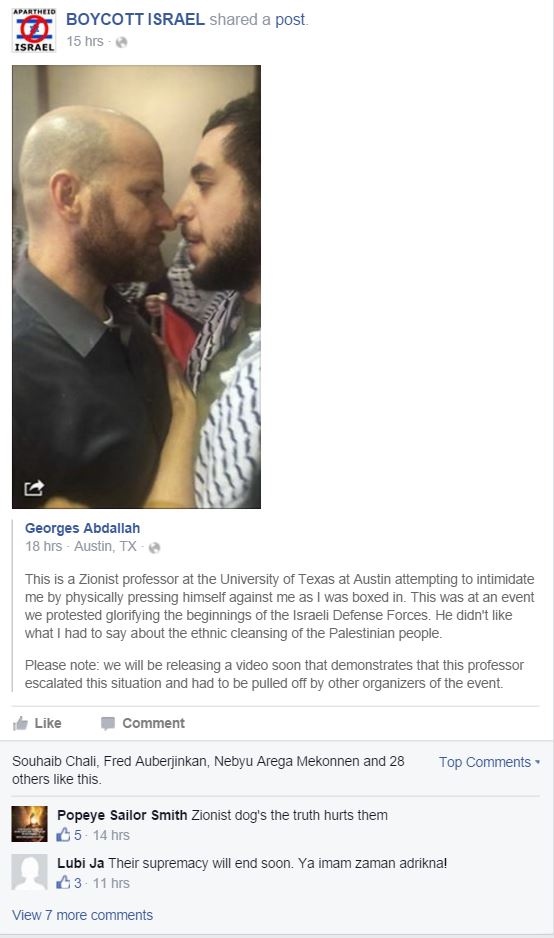 I emailed the students’ attorney, McGiverin, yesterday asking for confirmation or denial that Nabulsi used the online alias “Georges Abdallah.”  I also asked if the full unedited video would be released, but I didn’t receive a response to either request. Last night, however, the account had been reactivated and was live. (I don’t know if the reactivation was before or after my email.) As of this writing, it’s down again. 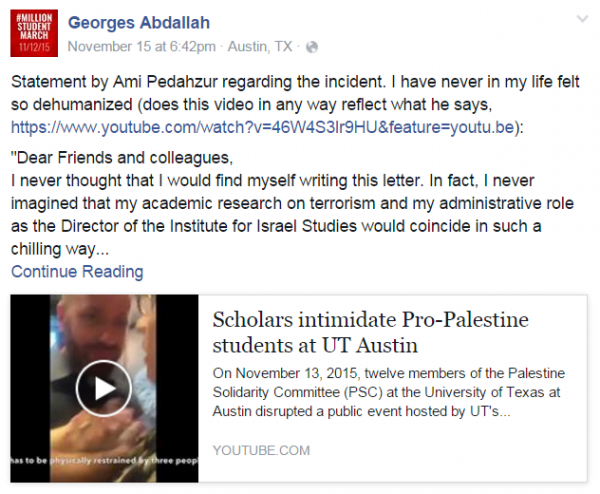 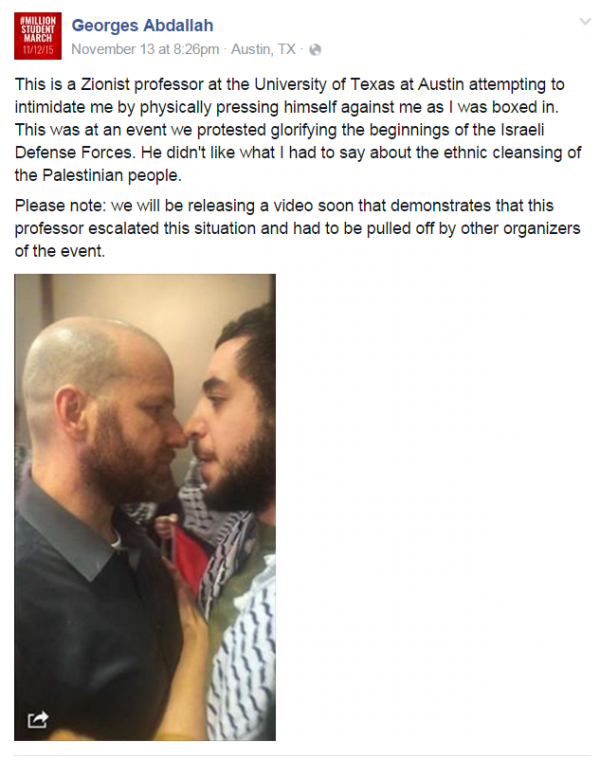 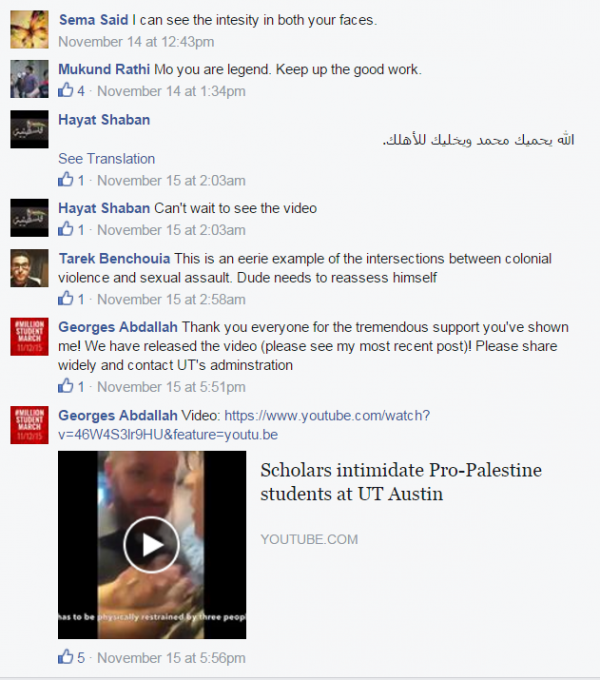 The post about the incident on the Boycott Israel Facebook page, which was only available in Google Cache when I first checked, was live last night and linked to the “Georges Abdallah” account that appears to be Nabulsi’s: 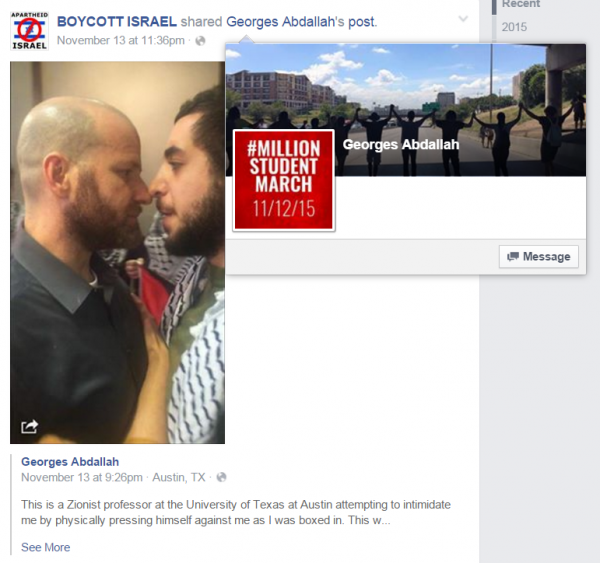 Who is Georges Abdallah? He is currently the focus of an international activist campaign to get him released from French prison.  Abdallah was infamous, The bombs exploded, and France’s prime minister called it ‘war.’ It was 1986.:

Yet, by the gruesome standard set by the Islamic State and other terrorist groups of more recent vintage, the bombing campaign possessed a logic that was comprehensible, if no less vile. The killers in 1986 had an objective. They wanted France to release three prisoners, including accused terrorist Georges Ibrahim Abdallah, awaiting trial in the killing of a U.S military attache and an Israeli diplomat.

Jacques Chirac, the French prime minister, who became president in 1995, declared that he would not submit to what he called blackmail. He increased police powers and tightened visa restrictions. In 1987, a French court convicted Abdallah and sentenced him to life in prison, where he remains. Police arrested suspects in the bombings. The explosions stopped.

It certainly seems relevant to the accusations in the complaint and at the press conference against Prof. Pedahzur that Nabulsi appears to have used the online alias of a known terrorist name.

In addition, the UT-Austin PSC sponsored a protest endorsing the current Palestinian uprising. That clarifies that when they chanted and screamed “Long Live the Intifada” while disrupting the Israel Studies event, they reasonably could be interpreted as using the term to apply to the current “Knife Intifada”: 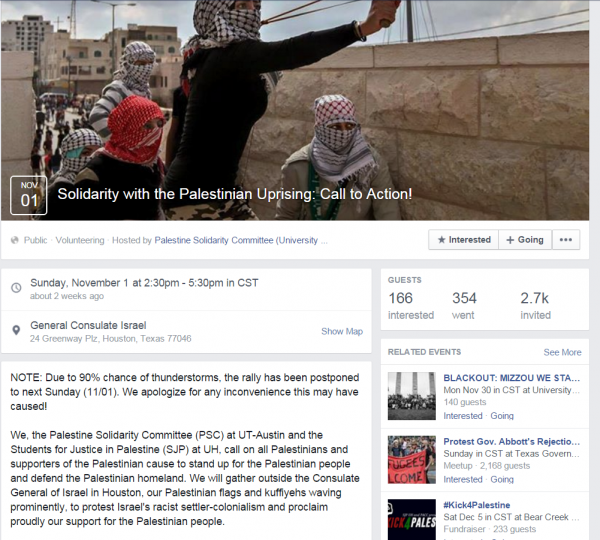 It also seems relevant that just over two months ago Nabulsi wrote an article for the Warscapes website in which he argued that the BDS movement must “support” groups like Hamas, Islamic Jihad, and the Popular Front for the Liberation of Palestine.

The article, published on August 27, 2015, was titled BDS 10 Years On: Anti-Colonial Demands in a Liberal Framework. You definitely should read the entire article, because there is a fairly frank assessment of the BDS movement and how its true goals of destroying Israel have been subverted by the need to bring western liberals on board.

To make the Palestinian cause palatable to liberal sensibilities, the drafters of the BDS call strategically presented BDS through the language of ‘human rights.’ For many, especially within the liberal West, the human rights movement presents an (apolitical) alternative to the politically charged nature of conflict resolution by operating ‘neutrally’ (i.e., without particular political interests or goals in mind) and ‘universally’ (i.e., independent of context)….

That’s the most honest assessment of the BDS deception I’ve read.

But more important to the current issue, is how the article explained the need to support “resistance” groups even as BDS mollifies western liberal concerns (emphasis added):

It is not enough to simply conceive of our movement as aligning itself with the ‘voices’ or ‘interests’ of the ‘Palestinians.’ What this means for BDS activists is that in developing the strategic vision of BDS, we must (1) look to and support Palestinian resistance groups and civil organizations that remain steadfast, in the face of PA-Israel collaboration, in their commitment to anti-colonial struggle—groups such as the Popular Front for the Liberation of Palestine, Hamas and Palestine Islamic Jihad; and (2) commit ourselves to supporting a one-state solution (whether a bi-national or secular democratic Palestinian-Israeli state) because it is the only political solution that, in recognizing the colonial nature of ‘conflict’, attempts to account for the realities and interests of all Palestinians, including Palestinian refugees.

Here is Nebulsi’s description at the bottom of the post:

There is more about what has been going on behind the scenes on social media, but that will be for another post.

For the present, the accusations made at the press conference seem somewhat different when you learn that Nabulsi appears to have used an online alias of a known terrorist name, PSC sponsored an event supporting the current uprising, and Nabulsi argued that BDS needs to support groups like Hamas, Islamic Jihad and the PFLP.

[Note: Some images and text were added after initial publication.]

We put people in jail for aiding and abetting terrorists. Why is this man not in jail?

Probably because they’t been able to, or tried to draw a actual connection between him and terrorist groups.

He’s telegraphing it, to anyone who understands what these names mean, or what some oher things mean, and also by attempting to use violence and intmidation, and lies, but there’s no concrete link.

Of course, also, there hasn’t been any investigation. No moey trail, even, that anyone knows.

Because expressing verbal support is not aiding and abetting. That requires material support. Even in time of war it is not treason to express support for the enemy, so long as one doesn’t do anything to actually help him.

* Probably because they’ve not been able to, or tried to, draw a actual connection between him and terrorist groups.

Some letters are being dropped when I type here.

“…presented BDS through the language of ‘human rights.’”

Since moving far afield from natural rights, “human rights” have become a hellish quagmire filled with the insufferable disgruntled.

Nabulsi and the other BDS zealots have, as stated and repurposed, appropriated ‘human rights’ in order to despoil another’s natural rights. Nothing short of Israel’s complete exclusion will satisfy the terrorist within them.

Terror, in all it mutations, seeks power over another at the cost of desecrating humanity.

I think the photos and names of the disruptive individuals who stormed into your office should be submitted here for the benefit of potential employees and landlords.
http://canarymission.org/individuals/

and I forwarded the video to their contact page.