The music industry’s biggest event of the year hosted and normalized an unrepentant bigot. Samaria Rice, the mother of Tamir Rice, condemned Mallory and her Grammy’s spectacle as the work of a “clout chaser”. 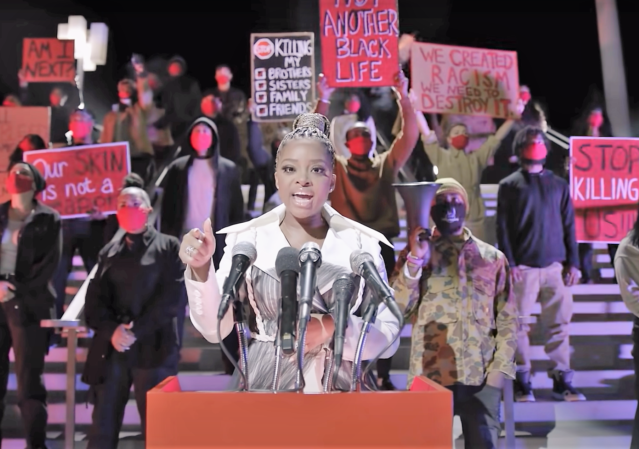 This past Sunday, March 14, 2021, marked the 2021 Grammys award ceremony. Usually, I pay exactly zero attention to celebrity awards shows, but this year’s event deserves a mention.

After a year marked by ever-increasing anti-Semitic incidents and the continued normalization of leftist Jew-hate, the Recording Academy decided that what the show really needed was a special performance by disgraced former Women’s March leader, Louis Farrakhan-supporter, and (as far as I can tell) non-musician Tamika Mallory. 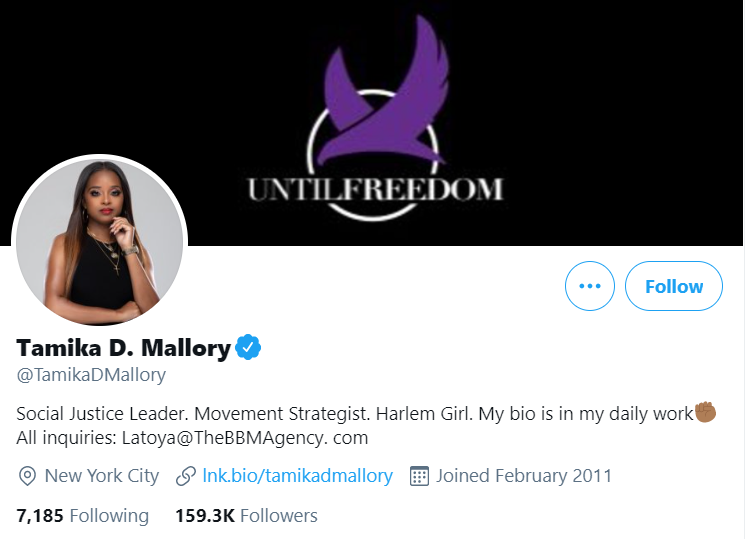 Tamika Mallory has long maintained that she is an “intersectional” activist, and working on behalf of all marginalized peoples. But her consistent exclusion of Jews from her efforts, not to mention her embrace of several species of Jew-hater, tell a different story. We’ve covered Mallory’s malfeasance on multiple occasions, including when she refused to acknowledge Israel’s right to exist as a Jewish state; referred to the infamous Nation of Islam leader Louis Farrakhan as the “greatest of all time”; when she (on national television, no less) refused to condemn Farrakhan’s long history of anti-Jewish hate-mongering; attended a Nation of Islam conference and earned special, affectionate shout-outs from Farrakhan during his keynote address; and when she earned yet more praise from Farrakhan at the Nation of Islam conference the following year. 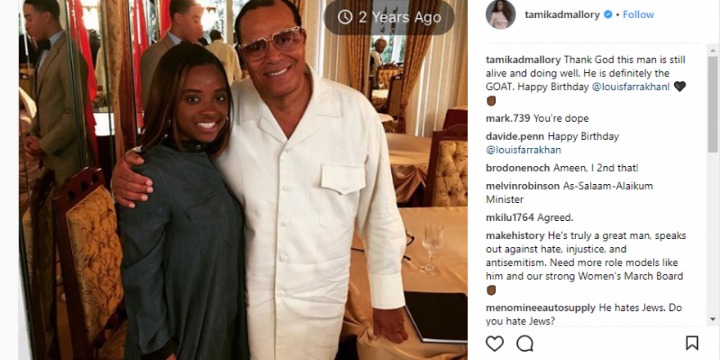 Mallory’s relationship with Farrakhan is deeper still. As our late friend and brilliant blogger Petra Marquardt-Bigman detailed in The Times of Israel,

In 2016, Mallory apparently shared the stage with Farrakhan for the Saviours’ Day event, which is an annual NOI holiday marking the birth of its founder. Since Mallory excitedly announced that she was “super ready” for Farrakhan’s speech and that she needed Farrakhan’s “hardcore truth”, it is noteworthy that the ADL highlighted the anti-Semitism promoted by Farrakhan during the same event in 2015:

“During Part 2 of his 2015 Saviours’ Day keynote address at Mosque Maryam in Chicago, Farrakhan used his platform to claim Israel and Jews orchestrated the 9/11 attacks. Farrakhan said, “Israelis had foreknowledge of the attacks” and that Jews were warned ahead of time not to come to work that day. He then went on to speak more broadly of Israeli control of the American government, stating that Israel and Jews “don’t fear America because they control it from within.””

The fact that Tamika Mallory can't say "I condemn his anti-Semitism" is all you need to know about why the Women's March is bleeding support. https://t.co/2g5TPbtExp

Mallory has yet to disavow Farrakhan, or even to sincerely condemn his innumerable hateful outbursts; but her consistently tepid response to discrimination against Jews didn’t stop the Recording Academy and several of the musicians it honored from holding Mallory up as a spokesperson for civil rights at the first Grammy Awards since George Floyd’s murder sparked Black Lives Matter‘s resurgence.

Black Lives Matter activist Tamika Mallory…appeared on stage with rapper Lil Baby during his performance of ‘The Bigger Picture’. Surrounded by protesters, holding placards, she said: ‘It’s a state of emergency. It’s been a hell of a year. Hell for over 400 years. My people, it’s time we stand. It’s time we demand the freedom that this land promises.

‘President Biden, we demand justice, equity, policy and everything else that freedom encompasses, and to accomplish this, we don’t need allies. We need accomplices. It’s bigger than black and white. This is not a trend, this is our plight. Until freedom.’

Lil Baby’s set recreated events seen across the US in the summer during the Black Lives Matter protests, which saw protesters and police clash in violent scenes that sparked accusations of police brutality on one side and rioting on the other.

Outside of a set made to look like a convenience store, the rapper performed his protest song ‘The Bigger Picture’, with the set featuring actor and activist Kendrick Sampson in a scene referencing the 2020 police killing of Rayshard Brooks.

His performance also included a scene of a black man getting shot by a police officer. At one point, the rapper stood in front of an ‘officer’ with riot shield and the convenience store burned behind him as he performed on top of a cop car.

The artist’s performance also featured a scene in which a black man was seen being arrested by two white ‘police officers’, also alluding to the killing of George Floyd last year and other cases of perceived excessive force by police against black citizens.

The song’s lyrics include ‘protests and growing national outcry continues over the death of George Floyd,’ ‘too many mothers that’s grieving’ and ‘they killing us for no reason…been going on for too long to get even’.

You can see the entire performance below.

Worth noting is that “Until Freedom”—a phrase the number’s backup dancers chanted repeatedly during the performance—is not just a slogan; it is the name of Mallory’s own organization, which claims to address “systemic and racial injustice”. After all, what’s a Black Lives Matter-inspired Grammys performance without a little bit of self-promotion thrown in?

Indeed, Samaria Rice, the mother of Tamir Rice (a Black young man who was killed by police in 2014 and whose killing helped crystallize Black Lives Matter) condemned Mallory and her Grammy’s spectacle as the work of a “clout chaser”. 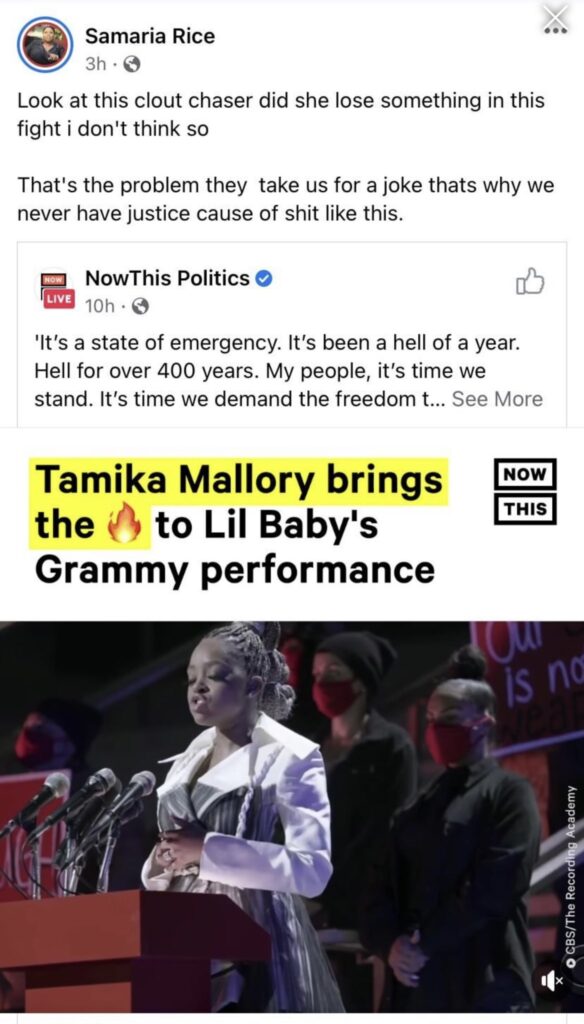 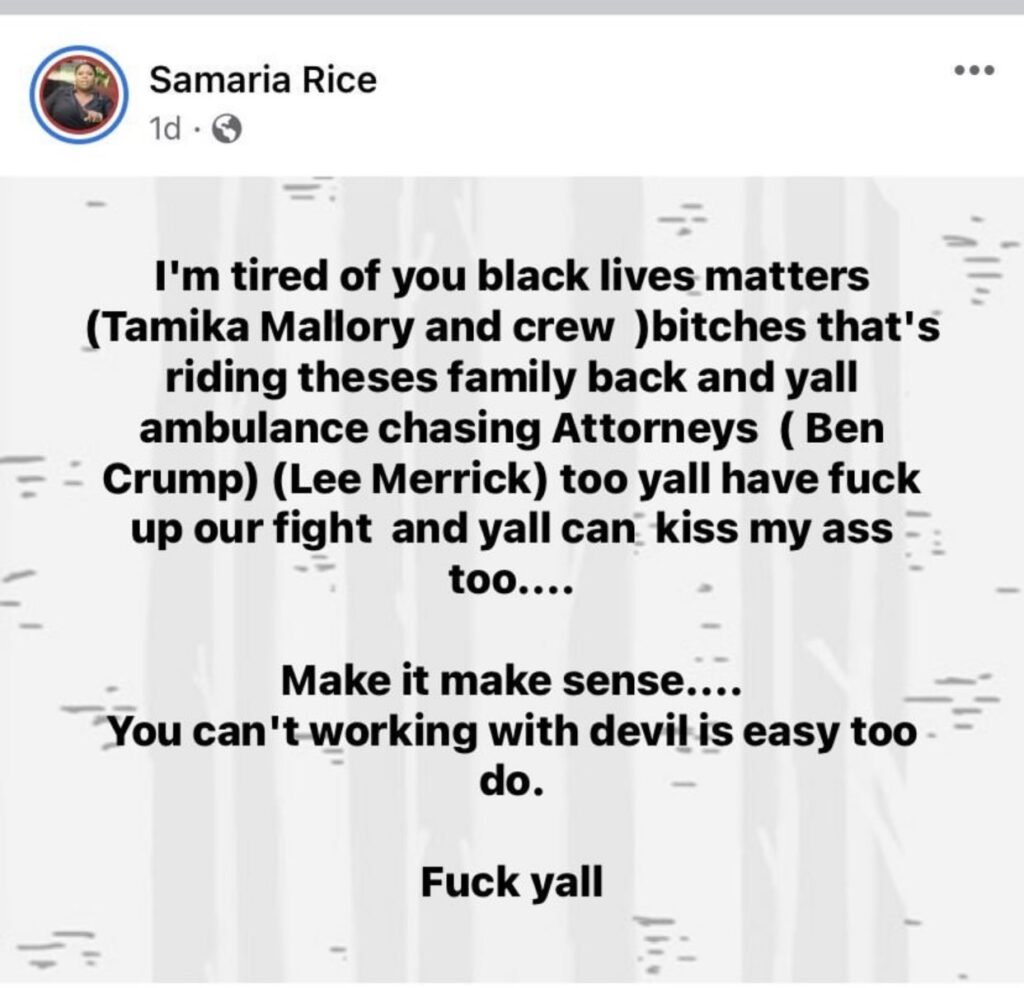 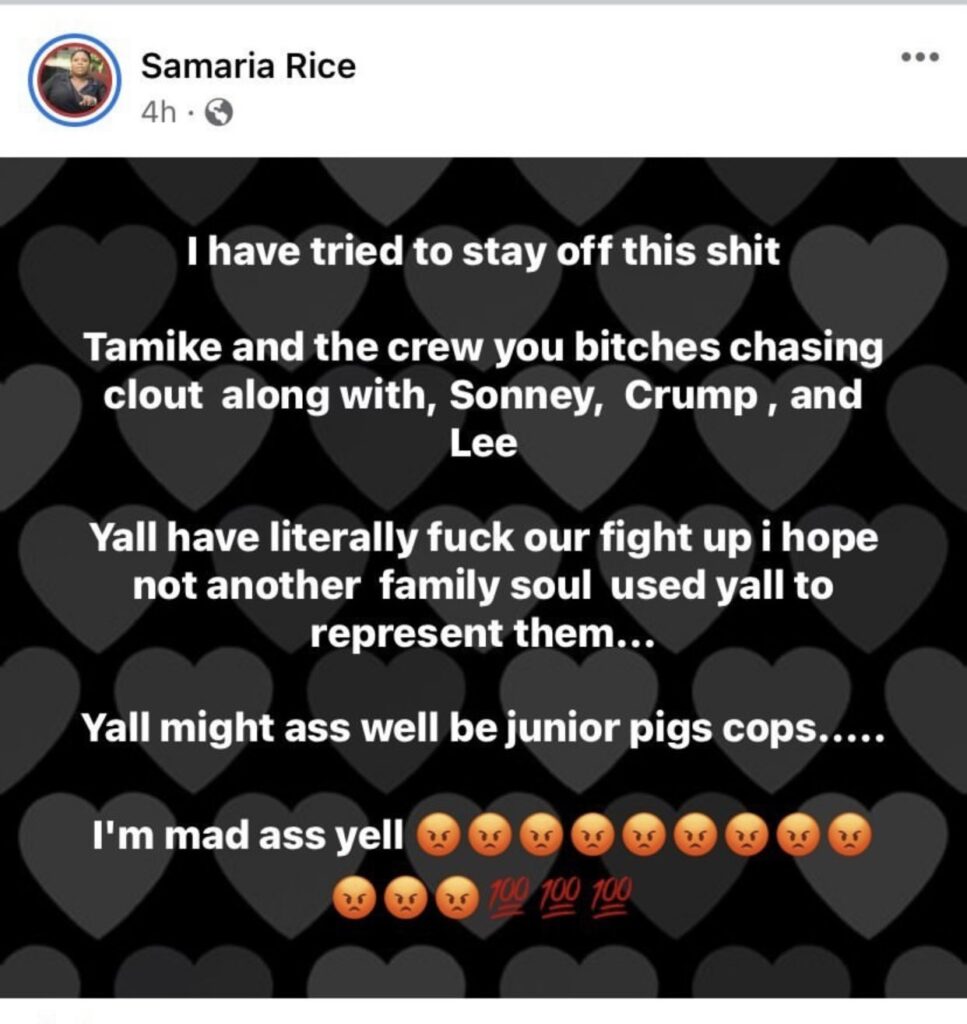 Though hers is not a style in which I would choose to express my own political opinions, I believe Ms. Rice has a point.

There are plenty of Black empowerment activists and civil rights organizations that have managed to battle racial injustice without fawning over career anti-Semites, legitimizing bigotry against other ethnic groups, or exploiting the fight for personal enrichment.

It’s well past time that corporations and entertainers alike started showing some ‘solidarity’ with them instead.

At least she did not share the bed with Cardi B. Or did she?

You’ve already given them more face time than they got on the awards show.

All of them can kiss my ass.

“Samaria Rice, the mother of Tamir Rice (a Black young man who was killed by police in 2014 and whose killing helped crystallize Black Lives Matter)”

Tamir Rice is another example of a child destroyed by piss poor parents. Where was his mother when safety markings were being removed from a replica gun? Did an adult encourage or help remove those markings?

Black sky high crime, where even children murder people, is also a factor.
Bring black crime down, black children will be less likely to be shot..

Police who do not pay attention to these issues, end up dead.

F**k you and the sh***ty music that brought you in.

What’s most concerning is that this kind of thing is happening in coordination with our military. The guns are slowly turning towards you and I.

Farrakhan is loved, honored, and respected by countless millions of men and women all over the Planet for speaking truth without mincing words. His opponents normally take his words out of context and mischaracterize his intent, cause they can’t bear a Blackman unhypocritically speaking hard, unpopular truths, which many times expose their unseemly historical dealings with Black People (and others). That’s the long and short of it.

I appreciate the comments here. But it’s important for Jews to understand that the Grammy’s just gave time to a blatant and admitted anti-Semite–and almost no one cared.

Does that include the Jews involved in the music business? Or, do they turn a blind eye because these “artists ” provide what sells?

Grizzly, I take your comment as an anti Semitic comment. It’s a big country. However
Many Jews are in the
Music business is a small fraction of the population. But that’s who you focus on.