Just admit that you hate Jews already and get it over with. 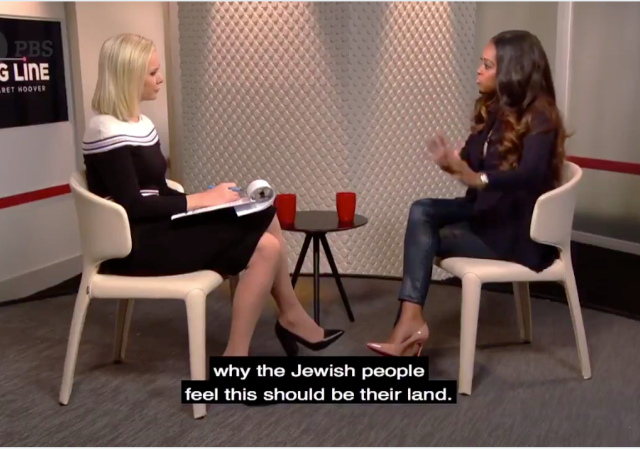 I know some people want Women’s March leader Tamika Mallory to stop talking, but I want her to keep talking because she is exposing her anti-Semitic views on her own.

Remember on The View she refused to condemn the anti-Semitism spewed by Louis Farrakhan. Now she cannot say that Israel has a right to exist.

“Is it your view that Israel has the right to exist as a nation?” host Margaret Hoover asked.

“In your view, does that include Israelis in Israel?” Hoover replied.

“I believe that all people have the right to exist and that Palestinians are also suffering with a great crisis. And that there are other Jewish scholars who will sit here and say the same,” Mallory said, clearly agitated by the line of questioning. “I’m done talking about this. You can move on.”

Mallory slipped when she said that Palestinians are native to the land because when Hoover then asked her if she felt that Jewish people are native as well.

Mallory babbled about how there are different ideologies that think that Jewish people are native to that land, but since she’s not Jewish it’s not fair for her to speak about that.

Hoover then pointed out that Mallory isn’t Palestinian either so…why speak about them and not the Jews? Oh that’s because Mallory is speaking to the people “brutalized” over there.

The more she talks, the more people and organizations drop the Women’s March. The DNC and NAACP quietly slipped away as did the Southern Poverty Law Center and EMILY’s List. NOW dropped their sponsorship a few weeks ago.

Rep. Debbie Wasserman Schultz (D-FL) wrote in USA Today that she will not walk in the Women’s March in DC because of the hatred shown by Mallory. The congresswoman wrote that “[I]t should not be this difficult to condemn hate speech.”

Actresses Alyssa Milano, Debra Messing, and Rosanna Arquette don’t want anything to do with the Women’s March as long as anti-Semitism remains.

Hope a similar awakening will occur with Tlaib and Omar.

Good point, but the stakes will be higher. Omar and Taliban, I mean Tlaib, will have to overplay their hands, which they might. But some are predicting that in a few election cycles the Dem party will move to their position. I wouldn’t bet against it.

As long as they keep tweeting and giving interviews, their bigotry and lies will be out there for all to see.
The media will do their best to cover for them of course, but eventually they will run out of spin.

There is no nice way to say this, Jews have considerable social value, by and large those living around them do not have any value.

Would the Copts in Egypt count as natives according to Mallory? They’re pretty darn brutalized by their Muslim conquerors.

How appropriate… A PP add displayed in a context discussing viability.

I’m sorry to say this but I don’t give a GD what this brain dead racist thinks! Why do they keep getting coverage? In a sane world, no one would even know who this antisemite slut is. Occasional-Kotex is another example of this newsmaker phenomena.

Ask her if Congressman Steve King should remain in the House.

The people being brutalized over there are the Jews.

It is the “Palestinians” who have devoted their lives, and their children’s lives, to killing Jews. They’re the ones who waste their lives digging tunnels and building bombs and blowing people up. They’re sick freaks who are so proud of their burning hatred for Jews that they publicly boast about how much they love death.

The Jews just try to defend themselves — on their own land. They aren’t the ones behaving brutally, the “Palestinians” are.

Two glaring observations as I go through the news this morning:

1. The “resistance” is crumbling on every front.

2. It sure looks like the fake news media is shaken FINALLY! Not from embarrassment but from the sense that they have finally gone past the tipping point. Their audience is just hanging around for the laughter. Then they will leave.

This was the week that the “resistance” was finally recognized for what it is even in the eyes of the most deluded and enthusiastic warriors. And the pin that pricked the balloon was Mueller himself. What a week!

it is shameful and dishonorable to give such a twisted, ignorant, self-important racist a platform

the ” women’s march ” co-president, no less?