At least Cuomo admits that NYC is once again a dangerous city. 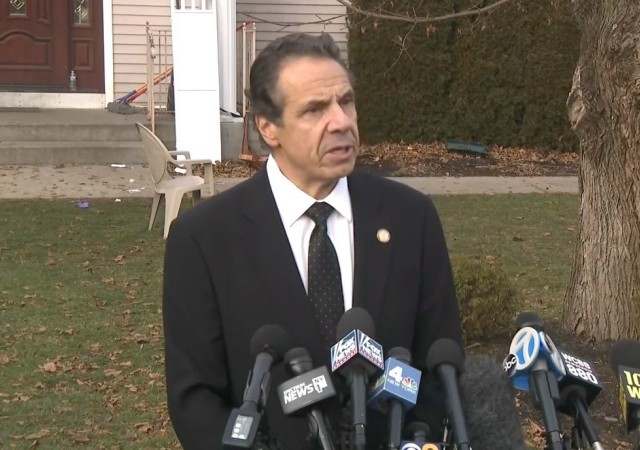 New York Governor Andrew Cuomo said Trump better bring an army for his protection if he ever came back to New York City.

My Administration will do everything in its power to prevent weak mayors and lawless cities from taking Federal dollars while they let anarchists harm people, burn buildings, and ruin lives and businesses. We’re putting them on notice today. @RussVought45

Trump on Wednesday signed a five-page memo ordering all federal agencies to send reports to the White House Office of Management and Budget that detail funds that can be redirected.

New York City, Washington, DC, Seattle and Portland are initial targets as Trump makes “law and order” a centerpiece of his reelection campaign after months of unrest and violence following the May killing of George Floyd by Minnesota police.

“My Administration will not allow Federal tax dollars to fund cities that allow themselves to deteriorate into lawless zones,” Trump says in the memo, which twice mentions New York Mayor Bill de Blasio by name.

“To ensure that Federal funds are neither unduly wasted nor spent in a manner that directly violates our Government’s promise to protect life, liberty, and property, it is imperative that the Federal Government review the use of Federal funds by jurisdictions that permit anarchy, violence, and destruction in America’s cities.”

Federal agencies must detail “all Federal funds provided to Seattle, Portland, New York City, Washington, D.C.” Also, within 14 days Attorney General Bill Barr must develop a list of “anarchist jurisdictions” that “permitted violence and the destruction of property to persist and have refused to undertake reasonable measures” to restore order. The memo does not require Barr to include the four cities, possibly for legal reasons.

“He better have an army if he thinks he’s gonna walk down the street in New York. New Yorkers don’t want to have anything to do with him,” the Democrat said, all but threatening the commander in chief.

But Cuomo, who like Trump hails from Queens, wasn’t done. “He can’t have enough bodyguards to walk through New York City, people don’t want to have anything to do with him.”

Of course Cuomo tried to walk back his comments:

“My comment about the president and bodyguards in New York City, all I’m saying is that he is persona non grata in New York City. And I think he knows that. And he’ll never come back to New York, because New Yorkers will never forget how gratuitously mean he has been to New Yorkers and how many times he’s tried to kill the city that gave him his start and birthed him. That’s what I meant about the bodyguards.”

NYC Mayor Bill de Blasio’s press secretary claimed that Trump “wants New York City to drop dead” and it “is a racist campaign stunt out of the Oval Office to attack millions of people of color.”

First off, I’m glad Cuomo is admitting that NYC is no longer safe. Secondly, NYC is close to death thanks to de Blasio.

Did Trump lie? We’ve been keeping tabs on NYC.

It helps that Trump is the commander in chief so he does have an army, Cuomo.

But NYC is spiraling out of control and it’s not Trump’s fault. It is filled with trash and has massive rats because de Blasio cut the sanitation budget while his wife keeps her staff worth $2 million. No one has anywhere to go or work because de Blasio wants to keep indoor dining until there’s a coronavirus vaccine.

I’m remembering something Trump said in 2016, and thinking maybe Cuomo should probably avoid standing in the middle of Fifth Avenue trying to stop the President from going where he pleases.

notamemberofanyorganizedpolicital in reply to Dusty Pitts. | September 3, 2020 at 2:15 pm

Has Cuomo been caught in Obamagate yet?

These verses truly apply to DIMS.

randian in reply to notamemberofanyorganizedpolicital. | September 4, 2020 at 2:36 am

They aren’t even trying to hide the vote fraud.

Is Cuomo going to force the President into a Covid riddled nursing home?

Ummm, he does have an Army.

Capo di Capi…wanna be. Such style..Such charisma. Such a way with words. Is he a man of his word or a snarling rodent in a corner? At least the Mafia knew what was good for business and he ain’t it.

“Tell Mike it was only business. I always liked him”

I’m certain Trump can depend on the NYPD to protect him. Maybe he should order Cuomo and DeBlasio arrested while he’s there.

Dude: he literally has an Army. It’s called The Army. If you want the 101st Airborne (of which I am an alum) running the city, I’m sure they’ll do a better job than DeBlasio and his team.

.
Once again, Cuomo delivers caustic comments to Trump when he should be directing them at the man in his mirror.

Yeah, but, critical introspection would require taking personal responsibility for one’s own disastrous and failed policy choices, something that Dhimmi-crats never, ever, engage in. Dunce Obama didn’t do it, despite his perpetual incompetence and disastrously inept foreign policy and economic illiteracy, and, Cuomo won’t, either.

Greasy, negligent and incompetent Cuomo is gravely mistaken — at this point, it is he who would require substantial security protection, from the angry rubes who elected him, and, who are now coming to their senses to realize they have installed an utterly useless, callous and criminally negligent narcissist-apparatchik.

Another major beneficiary of nothing but white privilege. Trust babies and offspring of the white rich and powerful. No hypocrisy here.

When will The Trump Organization start relocating administration offices to friendlier locations?

Right after the election, baby. Watch for it. Hell is coming. Trump will make sure of that.

I thought.a Shar Pei was a type of marker pen. (I wondered about all thst yapping and snarling while addressing a parcel..)

Sounds like they’re in 100% agreement. Couldn’t be fairer than that.

And people still try to claim that PDJT is divisive!

I remember the hulaballoo when Jesse Helms said “Mr. Clinton better watch out if he comes down here. He’d better have a bodyguard.”

The Secret Service had a chat with him, and made that publicly known, which I thought and still think was illegal because it was intended to have a chilling effect on protected speech. I’m pretty sure Cuomo didn’t agree with me at the time, so I’m glad to see he’s apparently changed his mind. Or would he like a word with the Secret Service too?

What is Cuomo gonna do, centrum to a nursing home?

Correction to The New York Post article: Minnesota police did not kill George Floyd. George Floyd killed George Floyd by an overdose of fentanyl. The police were simply there at the time, and they called EMTs to try to save him.

The riots were pre-planned. All the terrorist assets were in position, waiting for an event that could be used as an excuse. “The jogger” story didn’t catch fire, but the Floyd story did.

Well, gating federal funds does get tbeir attention. It’s like they mostly want to screw stuff up n make everyone else pay for their mess.

How any American can stop themselves ftom putting one behind this aszhoel’s ear if given the chance is beyond me. And here I include his security detail and every LEO who comes into contact with the aszwiep. Accidental discharges happen. That’s all you need to know. Plus you’d be vonsidered a hero by 95% of the population that counts.

Cuomo needs to take a walk in the East River with cement overshoes.

Cuomo maybe confused about who residents of New York hold accountable for all the problems in their state. I believe their anger is directed to Cuomo and Di Blasio.

Cuomo is erupting in frustration. Cuomo isn’t so dumb that he didn’t anticipate the economic impact of his severe lockdown, but the bailout promised by Pelosi in the stimulus bills and any further transfer of $$$ to NY during a Biden Presidency (and a cabinet position) look unlikely.

Cuomo is a fool. The people who elected him are fools. The people who respect him are fools. NYC is a war zone. Cuomo killed thousands of elderly with his senseless order to send COVID-19 infected patients into nursing homes. He’s a total failure as a governor and New York city and state is the worse for it.

Cuomo needs to STFU and should be investigated by the Secret Service for threatening the President of the United States.