It’s worth noting that the leadership is both cities is not Republican. 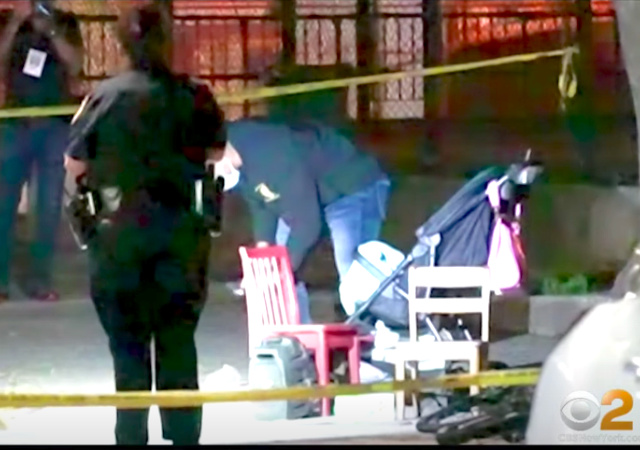 NYC and Portland have both caved to the riotous mob and you would know that violent crime in both cities has skyrocketed.

According to the NY Post, NYC has experienced more shootings already this year than in all of 2019 and there’s still 5 months left. But when the city disbanded the NYPD’s anti-crime unit, what did they think would happen?

There have been more shootings so far this year in New York City than in all of 2019.

A 24-year-old man who walked bleeding into Lincoln Hospital in The Bronx on Saturday night has pushed the city’s total number of shootings this year to 777 — topping the 776 recorded in all of last year, NYPD data compiled by The Post reveals.

And it’s only the first days of August, with five more months before the year is over.

“It only gets worse from here,” warned Joseph Giacalone, a retired NYPD sergeant and an adjunct professor at John Jay College of Criminal Justice.

“As the shootings continue, so will retaliation. It’s a vicious cycle that the NYPD worked hard to mitigate, but that they are no longer able and in some cases willing to do.”

The year’s plague of gunplay has touched every borough, killing or injuring 942 victims and cutting down not just hardened gang members but innocent children.

Mayor Bill de Blasio and police brass have put forth a litany of possible explanations for the bloodshed: The coronavirus pandemic, the corresponding closure of courts, anti-cop sentiment, restrictive new legislation, the disbanding of the NYPD’s anti-crime unit and the since-debunked notion that inmates released under state bail-reform law were to blame.

De Blasio has offered only a vague plan to combat the problem that largely amounts to gun-buyback programs and an increase in foot patrols  in areas with high shootings.

Portland is no better off. There, police have recorded the highest homicide rate in one month in more than thirty years. From Oregon Live:

Portland police are scrambling to respond to 15 homicides in the city so far in July. That’s the most killings in one month in more than three decades, they said.

So far this year, 24 people have died in homicides in Portland.

There have been a total of 63 shootings so far this month compared to 28 in July 2019, according to the Police Bureau.

While homicides, assaults, burglaries and vandalism are up this year compared to last year, total person-to-person and property crimes are still down from prior years, according to bureau figures.

Police Chief Chuck Lovell on Thursday said he’s very concerned about the heightened violence and is pulling officers from patrol to the detective division to help work on follow-up investigations.

He noted that the bureau was forced to cut its Gun Violence Reduction Team at the direction of the City Council. The 34-member team was disbanded July 1 as a result of budget cuts to police units that have targeted a disproportionate number of black people in traffic stops.

“What was really lost was the follow-up piece, picking up video , contacting people,” Lovell said.

It’s worth noting that the leadership is both cities is not Republican. You cannot placate the mob. I mean, you can, but the outcome is certainly not worth it. You can also neuter the police force and hinder their ability to pursue violent criminals (as both cities have done) and result is a significantly less safe community. This seems fairly obvious, and yet…

It’s called “self-policing and apparently, more effective to kill each other than waiting for the lazy police to do it.

As long as the violence stays in New York City and Portland I can’t really say I care what happens to either. It’s up to the citizens of each city to deal with the increase in violence. But that’s not likely to happen any time soon so whatever happens happens and that’s it.

Yeah, but if their refusal to control crime threatens the status of cities as centers of commerce and entrepreneurship, that’s something that effects all of us.

Nope, will only affect those cities that have been shown to be unable to control the violence and chaos. The rest of us should be just fine as long as we don’t allow it to spread to our communities.

Well, but a significant part of our nation’s wealth is based on the technological innovation emerging from places like Seattle and San Francisco. Urban spaces play an important role in facilitating the networking and relationship building that are an important component of venture capitalism. Tech bros having all night scull sessions in pretentious juice bars where the servers are referred to as ‘mixologists’ and all that. If that kind of thing stops happening we all get poorer, if for no other reason than that there are fewer rich people to tax.

And do you really think all those “Tech Bros” are going to stay in places like California if the CA legislature has its way?

Nope. The CA legislature raises the taxes on the California billionaires in a sick, sad, and pathetic attempt to balance their budget they’ll just simply up and leave the state (along with their businesses) for some other state with much lower taxes. Guaranteed.

Likewise. I have no sympathy at all.

As of July 31, the peaceful paradise of Chicago has recorded 2345 Shootings and 456 Homicides.

If there enough bullets available, Chi-Town will hit 1000 murders this year.

Disbanding the police unit responsible for preventing shootings leads to a lot more shootings. Who could have guessed?

Race Politics, article by William Federer in which in lists, from 1857 to date, all the racist doings of the Democrat Party,

In 1857, the Supreme Court, with 7 of the 9 Justices being Democrat, decided that Dred Scott was not a citizen, but property.

﻿Taney wrote in his Dred Scott decision that slaves were “so far inferior … that the Negro might justly and lawfully be reduced to slavery for their own benefit.”

[and on and on by the Democrats]

And to Dems the cause is a mystery.

Other than that OrangeManBad has to be responsible in some way.

Not only not-Republican, but with New York, disarmed, and with Portland, not-easily-armed and totally corrupt legal system as opposed to just nominally corrupt.

Could it also be that there’s a rise in COVID-19 cases as well, and cases not transmitted by religious services, funerals, and visits to hospitalized loved ones?

In the mean time, we among the unwashed masses in flyover country go about our business. It’s probable that a good number of our fellow grocery shoppers are carrying concealed and threatening no one. The man I saw calmly open carrying a few days ago worries me not at all.
.

I feel safe in my area. Unfortunate situation for those folks. I suggest stop voting for progressive idiots.

Umbrella Man is responsible for the current unrest in the deep blue cities. Or so says the Joseph Goebbels media.

Where ever you live, buy a home and personal defense weapon, learn how to use, get a concealed permit if you can, practice, keep your personal weapon with you. Know your state laws.

Was in a gun store this week, early afternoon, full of negroes, checking out the guns, big move now in the africans for guns, take that as a sign, arm yourself before the election.

b.LACKS looters murder gang put a target on the back of every white, young or old, male or female. That includes you!!

I’m done trying to reason about this. As usual, there is no mutually beneficial, dialog civilly possible with communists. They refuse to be governed, in Foucault’s style of thinking, by a capitalist-powered, panoptic regime. The only authentic democracy, in their view, is a totalistically communist one.

Convict and incarcerate them, or live under their rule. There’s no other workable middle ground. Such a compromised, shared, equally acceptable vision is had by peace-loving, moral, and decent people — all of which the Dem execs and dem-dominated legislators, city and state, are not.

They can fight endlessly among themselves, which, you can count on, they will. Being relatively rational, civil, and sane, I’m done.