Former NYPD detective claimed defunding the police and other reforms “have made criminals ‘fully empowered.'” 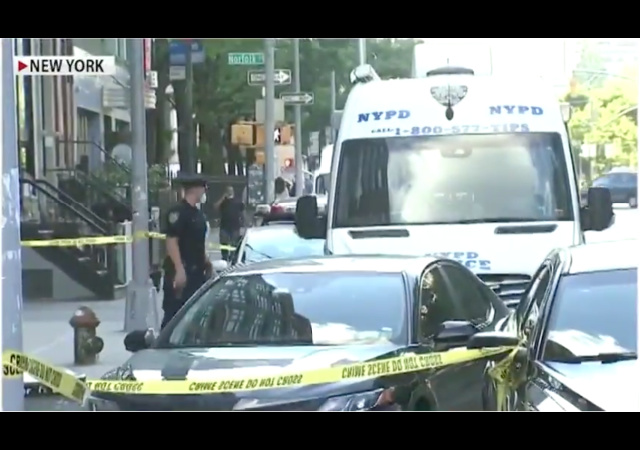 Violence has embroiled New York City since the Wuhan coronavirus pandemic hit with significant escalation after the death of George Floyd.

NYPD data show the city topped 1,000 shootings for 2020 on Sunday. It also shows that shootings average at least 10 people a day in the city.

The latest report states that “25 people were shot in New York City this past weekend, four of them fatally.”

With four more months left in 2020, New York City logged 1,004 shootings as of Aug. 30, according to NYPD data released Monday. Last year, there had been just 537 by that time.

It is the first time the city has eclipsed the benchmark in gun violence since 2015, when 1,138 shootings were recorded for the entire year.

“Mr. Mayor it is time to stop calling New York the safest big city,” a Brooklyn cop quipped to The Post.

Despite the violence, the city council and Mayor Bill de Blasio cut millions of funds towards the police.

This has worried victims of gun violence. The New York Daily News reported that “Jovan Sanchez might’ve supported defunding the police had his brother not been gunned down on the Fourth of July.”

It’s been two months and no one has arrested anyone in connection with Jamal Sanchez’s death:

“Jamal was a good man. I still wake up every day and I cannot believe that someone killed my brother,” said Jovan Sanchez, 38.

“I’m not quite sure we can leave it up to a community to protect our own. I don’t think that we have that capability yet, as a people, as a community,” he said.

A cop put Rebecca McCalla’s son in a chokehold in 2016. He lost 15 vacation days.

But McCalla is against the defund movement because she knows not all cops are bad:

“I feel like they’re giving up. They feel like everybody is against them. Not everybody wants them defunded,” McCalla said.

Afterward, McCalla was inspired to get more involved in her community and local precinct. “We still need the cops, we just want to see better from them,” she explained.

Who is to blame?

Brooklyn Borough President Eric Adams and New York City Council Member Ritchie Torres want “an investigation into whether an unannounced NYPD work slowdown accounts for the rise in crime.” They think cops are protesting the reforms by not showing up.

“Both politicians, the councilman and Brooklyn Borough President Eric Adams are 1,000% wrong,” said Brosnan, who added that “the 100% uptick in gun violence, meaning twice as many New Yorkers will be shot versus this time last year,” is a result of what he refers to as the “deadly sins.”

“It started with defunding the police, it moved into disbanding [the] city wide anti-crime [unit], they’re the folks, by the way, who take the guns off the street,” Brosnan explained. “It moved on to disinterested prosecutors, [who say], ‘We’re not going the prosecute those crimes. Not important, instead let’s empty the jails’ [and are] discharging prisoners.”

Brosnan said all of those actions “desecrated the NYPD” before adding that “just when it couldn’t get worse, they dropped … the diaphragm law on us in mid-August like a hand grenade.”

Brosnan declared the reforms “have made criminals ‘fully empowered'” because now they can carry their guns and know that no one will search them.

“When you cut hundreds of millions of dollars from the budget, we have literally taken thousands of officers off of the street this summer,” Shea said. “It’s done at a time when we know violence is going to peak,” he adds.

Shea said, “it’s been busy summer,” but there is no “slowdown”, noting that the NYPD needs some help on policies and laws.

“I can tell you the detectives made arrests on 19 separate shootings or homicide incidents just last week.”

What the victims should be questioning is their voting habits!

If the citizens of NYC keep voting for DiBlasshole then they should expect more of this. I remember NYC under Abe Beame and it was truly a war zone. I pray the liberals wake up and do the right thing.

No one can say that this was not expected. Less law enforcement, no bail, more criminals on the street equals more crime. Duh!

The NYPD had reduced officer involved shootings from over 700 per year to less than 80, in the last 30 years.

I am afraid that trend is reversing now.

You are letting the left control the narrative by using the term “gun violence“. The gun itself is not violent. It is a tool used to defend yourself. Criminal activity utilizing guns has increased. It is part of an overall increase in criminal activity.

Carelessly using the lefts terms will make it much easier for people to accept their solutions.

“Brooklyn Borough President Eric Adams and New York City Council Member Ritchie Torres want “an investigation into whether an unannounced NYPD work slowdown accounts for the rise in crime.” They think cops are protesting the reforms by not showing up.”

Oh…I’m pretty sure the cops who haven’t quit or retired are showing up for work…they want to keep getting paid.

But as a cop you’d have to be insane in the current environment to actually attempt to do your job with any kind of enthusiasm. Cops are not just being fired, they’re being charged with felony crimes for just doing their jobs.

Were I a cop, my arrest procedure under the current climate would be something like “Excuse me sir, I need to place you under arrest, are you OK with that? If so, please place these handcuffs around your wrists…you’re not OK with that? Well sir, then have a nice day”.

I’ll be the Cassandra here and just mention we need to make sure we don’t forget that a strong police force and an emphasis on law and order is also useful to tyranny. At a minimum, remind ourselves that we do actually want police/legal reform – rights of the accused, police brutality, civil forfeiture, laws that shouldn’t be laws – but we don’t want it at the expense of the laws and the order that needs to be there.

I think we also need to remind ourselves not to be too gung-ho bout the federal gov’t stepping in. Not just because “they’re Dem cities and they deserve what they get” but because that’s another path toward tyranny – consolidation of power into one office or level of gov’t.

Now, get back to bashing the ideas of the imbeciles who want to “defund the police”.

A strong police force is actually a bulwark against the most common form of Tyranny, which is when the Army is forced to take control, institute Martial Law, and ban all civilian forms of government. And if the Left keeps up this attack on the police, that’s exactly what is going to happen in the hardest hit areas.

If you chase the police out, the next group comes in with tanks.

Yeah, there’s good reason for law enforcement to be kept, primarily, in the hands of local elected officials. Also, living in a free society means putting up with people who make dumb decisions. Portland and New York need to sort out their own problems, Trump shouldn’t intervene.

So, no cops mean crime skyrockets?? Who would have guessed sarc.

I think defunding the mayor’s office would work better.

What really bothers me is the New Yorkers who have moved to the Atlanta area this year and are planning to vote the same way they did in NY.

Is the DOJ laying the foundation to indict George Soros and his Masters of the Universe partners?

If not, what is everyone waiting for?

It’s exhausting dealing with these intellectual and emotional toddlers.
– Angrily make demands and lay claim to other people’s goods and well-being.
– Crudely insult and assault those who point out the logical consequences of implementing those demands that should be obvious to reasonably observant 6 year old.
– Suffer those exact consequences you were warned would occur. – Demand the same people you insulted give you more money and fix the problems you created for yourselves.

Enough. The “marginalized” and “disenfranchised” can go f themselves at this point if they are going to continue to take zero responsibility for their own plight and for their inability to draw a simple cause-effect relationship in their pea-sized brains.

As far as the power seeking, ego stroking, preening bourgeois “activist” crowd that manipulates, gets off on, and profits from the misery of these “m&d” communities, at this point I could care less if they are mowed down en masse at their next protest/riot. Thin the herd of these vermin.

If his family would have voted for defunding before his brother died, then it sounds like the family got some karma.