Cam Edwards: “Plenty of blame to go around.” 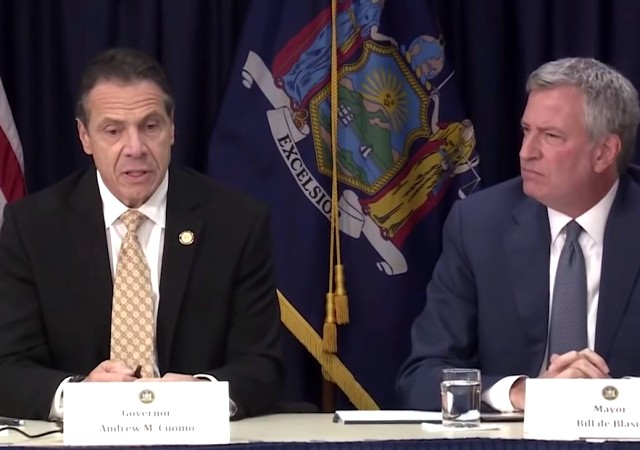 It did not surprise me when Cuomo blamed de Blasio for the spike in NYC violence. However, he forgot about his own failed reforms.

We have documented the crisis in NYC:

The death of George Floyd has led to protests, riots, and citizens demanding cities defund the police.

De Blasio released inmates from Rikers during the coronavirus outbreak. He said it’s “unconscionable” that those released “are committing new crimes” because they “were shown mercy.”

Cuomor said the violence concerns him, especially since it will hinder efforts to reopen NYC and “getting New York up to speed.” From The New York Post:

“The situation with the NYPD and the tension with the protests groups and community groups is a factor. How that is playing out? I’m not sure exactly that anybody knows, but I know the NYPD feel they are under significant pressure, which they are. And that tension is in the mix,” he said.

But what about you, Cuomo?

Oh, let’s not forget the failures of @NYGovCuomo’s bail reforms and SAFE Act gun control laws. Plenty of blame to go around. https://t.co/LM64gUj7Nj

From Politico in April:

Few efforts represented as sweeping a change as New York’s reform. The law, which passed in April 2019, limited the number of crimes for which judges could set bail, mostly to violent felonies. Almost everyone else—those who make up 90 percent of arrests in the state—could walk free while they waited for their trial date, though judges could impose strict monitoring conditions. For the first three months the law was in effect, from January through March, New York’s jail population dropped sharply: At the end of 2019, the jail population across the state was close to 20,000; for the first three months of 2020, it was around 15,000 and continuing to shrink.

And then came news of a crime spike. A number of hate crimes had shaken New York over the holidays, including a woman who was arrested three times for assaulting Orthodox Jewish women in one week in Brooklyn; outlets noted that she had been released from jail under the state’s new bail reform laws. In early March, the NYPD released a report showing that crime in February 2020 was up 22.5 percent compared with February 2019. In the report, the department explicitly blamed the uptick on criminal justice reforms, including the bail reform law. According to the department, in the first two months of the year, 482 people who had been arrested on charges where cash bail was prohibited went on to commit 846 new crimes.

Bail reform advocates dispute the stats suggested “officers were making bad arrests to make the stats look bad and that prosecutors had to ultimately toss out those charges.”

Edwards wrote about the SAFE Act, which passed seven years ago. The law is poorly written with provisions almost impossible to enforce.

He reviewed a book by NYU professor James Jacobs who described the law as “symbolic politics.” Jacobs pointed out that the act “immediately went into implementation and enforcement difficulties.” Only 10% of New Yorkers with supposed “assault weapons” complied with the requirement to register such guns.

Jacobs wrote one portion saw actual enforcement that requires “mental health professionals to report to county officials the names of patients perceived to be mentally ill and dangerous.”

Edwards said the prosecutors have largely enforced the penalty of having a firearm without a license a felony instead of a misdemeanor.

Liberal Playbook: Never take the blame when you can blame others and there are always others to blame.

The leftards encapsulate the meaning of “circle jerk” … ?

I can definitely see how doing away with cash bail for most crimes would lead to some problems. On the other hand, people sitting in jail for long periods of time who haven’t been convicted of anything doesn’t sit right with me from a civil liberties perspective.

Yes, the principle behind the bail reform is sound. Reasonable bail is a constitutional right, and it’s not right that those who can’t afford it should be imprisoned merely for being poor. Deliberately setting bail too high for the person to pay, so as to keep them locked up, is unconstitutional; but that is often what judges used to do, while pretending not to.

The problem has been in the implementation. The list of offenses that qualify for denying bail altogether is too restrictive, and judges have been too lax in deciding when someone poses a threat to the public. When someone is released and goes right back to offending, so that it’s clear that he doesn’t think there are any consequences, he needs to be denied bail — whether he’s dirt poor or a millionaire.

I agree, but in this case I would not be upset if the were accidentally shipped to Guantanamo Bay and their paperwork was lost.

The rats are starting to turn on each other. Good.

When Mayor Putz was first elected, New York City after two Republican mayors was extraordinarily safe. Now, on just the space of two terms, Mayor Putz has just about undone their good work. To the voters of New York City, you reap what you sow.

JackinSilverSpring: If you’re also in my dear, deep indigo Maryland, I see us only a little behind NY. Hogan winning our governorship was some strange fluke.

Bloomberg was never a Republican. He was a Democrat who ran on the Republican line only because it saved him having to fight a tough primary.

It’s not hard to destroy a city by governing it like a moron. Just ask LA mayor Eric Garcetti.

Two raging corrupt, incompetent lunatics.
It is so hard to believe they govern NY and NYC.