“Half of you don’t even have a college education — to be out here making demands about the people when you can’t even read a f—ing history book.” 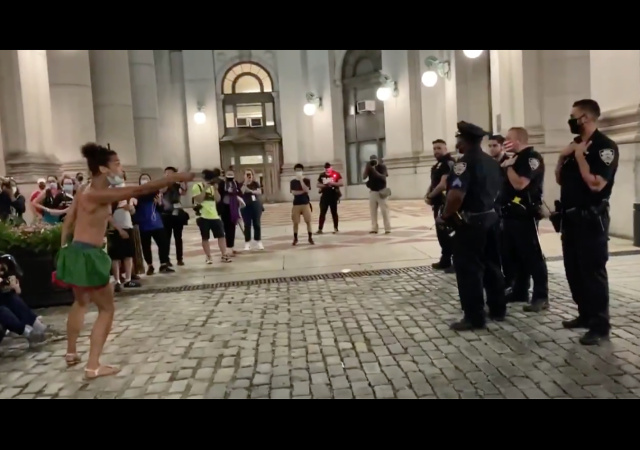 Protesters continue to occupy City Hall after the City Council didn’t meet their demands in the NYPD budget cuts.

“I can’t believe you all are getting paid to sit there like f*cking idiots,” one woman said. “You guys go to clown college for like 26 weeks.”

“Your hairdresser has to go to school for longer than you do,” another man screamed. “Half of you don’t even have a college education — to be out here making demands about the people when you can’t even read a f—ing history book.”

“You should f—ing know better,” the man shouted at the black officer. “You should know better. Traitor! Traitor to your f—ing people! You’re like the f—king black Judas.”

Black Lives Matter protesters at the NY CHAZ brag about their college educations and mock the police for being uneducated, working class, illiterate rubes. They also call a black cop “black Judas” or race traitor. pic.twitter.com/HD01cu2ZVc

A protester dances in front of a line of NYPD officers outside of One Police Plaza. pic.twitter.com/Qtkhun8jTP

NYC agitators tell a black NYPD officer that if he took off his badge, the white cops would kill him because they don’t care about him. pic.twitter.com/OaF2PC25M6

NYC CHAZ occupiers once again block off the road by city hall and instruct drivers to not enter the street because a protest crowd is about to march down. pic.twitter.com/m3CumwRyCt

So many of our young people going off to college to get stupid.

notamemberofanyorganizedpolicital in reply to Dennis. | July 2, 2020 at 3:47 pm

And the rioters are still uneducated but then debt slaves to the Democrats.

These rioters make the strongest memes for DEFUNDING all colleges.

Dennis in reply to notamemberofanyorganizedpolicital. | July 2, 2020 at 3:55 pm

Yeah, we should make student loans a little harder to get. Obama started applying gainful employment rules to like trade schools and stuff but he chickened out and never applied it to 4 year schools. If he’d done that there would be maybe one or two gender studies departments left in the country.

The government should not be in the education business in any way, whatsoever.

“Half of you don’t even have a college education”

From I’ve been seeing that seems to be a resume enhancer.

“Half of you don’t even have a college education”

Having seen the video and her bare breasts, she needs college. Lots and lots of college.
Because there is one place she hadn’t got a chance at getting a job…

So, as of now, lap dances may continue at strip clubs in the county. https://t.co/n826Lo5kF0

Nah. They’re already stupid. College is just a 4-7 year delay of finding out what kinds of work are available to someone with a “gender studies” or similar degree.

If I were a lawyer, I’d be trying to gin up a class action suit against colleges for offering majors like that. By doing so, they’re implying that a market for graduates with specialties like that exists. Deceptive advertising, perhaps….

Oh, trust me, that market is being created:

“Putting more women who think and act with intersectionality in charge of investments is how we will make sure the best ideas get funded and bring value.”

And, for more immediately practical instruction:

“Course 21H.001 (How to Stage a Revolution, or Revolutions for short) is an MIT history class that examines the roots, drivers, and complexities of how governments fall.”

Until those who put money in these investments realize the insanity of those running it, and pull their money out to put in more reasonable firms. Unless they are outright insane with money to burn, they expect a return.

Turns out Tech is my alma mater, so I checked it out. It’s a history course, offered as early as first year undergrad. it varies year to year, looking at different revolutions. They typically analyze three per course. It’s not a practical guide, just a deep look at a few. Student reviews of the course are pretty positive.

Classy. It must have used up a lot of “college educated” brain cells to come up with some of those lines.

That tranny parading around without the top on shows a mentally ill person with no common sense, and probably sporting some worthless degree. I would have been laughing at it. Certainly not insulted by it.

At one point in the video of this stupidity, it definitely looks like they cops are busting out laughing. It’s all just too idiotic for words. They must feel like they’re in an episode of the Twilight Zone… Or Candid Camera.

I am really starting to believe that closed psych wards have been emptied to populate the demonstrations.

Well, yeah, the colleges have been shut down for months.

How many of the protesters can compose declarartive sentences more than four words long without resorting to vulgar language?

And by the way, some of the biggest dopes I’ve ever met had several college degrees.

Those cops have to be asking themselves, “Why am I doing this?”

“To stem the tide of anarchy. And overtime; lots of overtime.”

bet many of those cops have at LEAST an Associate if not a Bachelor’s in LEO related item, esp if any are vets who used the GI bill.

To join NYPD, it’s a requirement to have at least two years of college.

Did not know that, thanks.

Even back in the late 1960s, many Jr Colleges offered Police Science majors.

At what point does ordering the officers to stand there and endure verbal abuse 24×7 become an issue with their employer – knowingly putting them in an abusive situation potentially causing long term psychological trauma, etc.?

Were it up to me, I’d bring in a LOUD sound system, turn it on the protesters and hit them with about 120dB of non-stop white, pink and brown noise – whichever best masks their yelling. Or, bring in a MUZAK player and hit them with Lawrence Welk music, Polka, old-timey country (Mars Attacks!) – until they get tired/annoyed with it. The cops of course get decent hearing protection of the noise-cancelling type and are behind the sound system where it’s far less loud.

I like the way you think. A water cannon would also be appropriate.

yeah I do have a lot of issues with crap like that however thats the fault of the politicians.

In fact, they are trained to lie.

The Law’n Awduh faction of the Supreme Court gave them the go-ahead to lie during interrogations in order to get confessions. Some, if not most, took that as their permission to lie no matter what.

“You guys go to clown college!”

Talk about projection! The protesters sure look fierce though.

Watched the video. Talk about being off the rails … We used to have places for guys like this. State Asylum No. 1.

What are these idiots trying to accomplish? Calling a cop names is really effective because cops never get called names during the careers — right? Are they trying to convince people that we should have these noisy morons run our lives? If this is not mental illness, then what does it look like?

As a former beat cop in Honolulu, i can tell you all the taunts roll off like water off a duck’s back.

He can stand calmly with sheer chaos going on.. and give a pleasant, coherent report. I hope we see much more of him.

notamemberofanyorganizedpolicital in reply to amwick. | July 2, 2020 at 11:49 pm

Meanwhile at the Miami airport, a little black on black police action
https://www.nbcmiami.com/news/local/miami-dade-officer-suspended-after-video-shows-him-hitting-woman/2256813/

probably going too lose his job

She headbutted him. He should have said that she grabbed his crouch.

If I was the cops, I would take names and call their parents. Probably would dry up their money stream.

Today I learned that BLM believes that you have to go to college to read a history book.

Never going to vote for him for anything ever again

Abbott proves what I have said for a long time: lots of Texans swagger, bluster, and mouth off, but when the chips are down, are just like others. A variety of types and no tougher on average than elsewhere.

To update an old phrase about hats and cattle, “All King Ranch Dually, carries groceries in the bed”.

I think he’s term limited so we won’t be faced with the necessity of voting for him again.

This is why face slapping was invented.

Wow, these urban, white Dhimmi-crat racists and narcissists are totally comfortable vilifying and denigrating black cops, and, showing off their unabashed and gleeful racism — all for a good cause, of course.

Would you rather have police in charge? Or “anarchists?” No “anarchists” are real anarchists – they want power.

We could all learn some lessons from this police horse.

And the Gods smiled.

coyote in reply to notamemberofanyorganizedpolicital. | July 3, 2020 at 9:00 am

And the horse gets put on paid administrative leave while it’s investigated for possibly being sexist or racist.

Who’s the guy in the green shorts?

So these college kids who are now up to their eyeballs in debt, who have a worthless degree, and who are likely unemployed (possibly even unemployable), are trying to claim the higher moral ground from a policeman who has a job, pays taxes, etc. Could someone please explain to me how people can seriously claim to be superior after making so many terrible life choices, accomplishing virtually nothing of any value, leaving themselves is terrible debt, and having virtually nothing to show for their lives.

Explanation is simple: they “care.” I think that’s becoming an occupation.

At first I thought IT was a woman who was Topless but then played the video ,,,, and realized IT in a Mentally Ill Maggot ,,,, where’s a Baseball Bat when you need one ??

Would someone please buy that guy in the green skirt a bra.

I am still not sure what species that prancing creature is.

How exactly am I to take a shirtless dude in a green grass skirt and heels seriously?

I want to know what my rights are if protestors/rioters surround my car. What if they are not violent but prevent me from continuing on my way? What if they become violent and damage my car? What if they threaten more violence? At what point can you step on the gas and get out of there even if you have to injure and kill people with your car?

My brother in law is a retired Chicago cop and has a Masters in Public Administration. I wonder what her/his/its major was?