While Beto is not the only Democratic candidate who has kissed the Abrams ring, he has perhaps embraced the stolen election myth more than the rest. 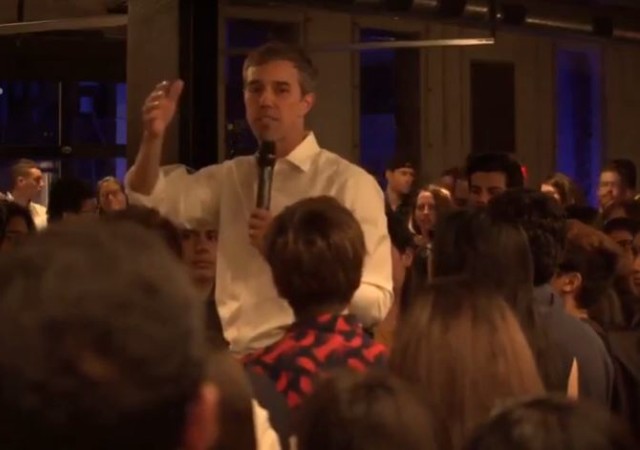 When failed Senate candidate Robert “Beto” O’Rourke first jumped into the Democratic presidential race back in mid-March, the sky was the limit.

His fundraising haul in the first 24 hours was massive, major Obama fundraisers and former aides were lining up behind him, and he was receiving glowing press coverage.

But a funny thing happened not long after he announced. Interest from the press and liberal political analysts shifted to shiny new candidate and South Bend Mayor Pete Buttigieg, who is gay, and the four female candidates. Speculation about whether or not Joe Biden would enter the presidential race was at a fever pitch.

As all of this was happening, enthusiasm from Democratic voters for O’Rourke was also waning. After polling at 12% just a few days after he declared his candidacy, his numbers dropped to the single digits, and they haven’t recovered.

Beto’s response to losing the spotlight to minority candidates like Buttigieg and the ladies is to do what comes naturally to Democratic hopefuls in the primary season: Shamelessly pander to Democratic minority voters.

There are three main ways he’s tried to do this. One is to accuse President Trump of being a borderline Nazi who is “responsible” for the deaths of illegal immigrants at the border and the horrific mass shooting that took place in O’Rourke’s hometown of El Paso, TX.

The second is to embrace an anti-America platform by way of asserting that our country was “founded on white supremacy.”

The third way is one he invokes often: the 2018 Georgia gubernatorial election was stolen from Democrat Stacey Abrams.

While Beto is not the only Democratic candidate for president who has kissed the Abrams ring by indulging in the fantasy that she would be governor had Brian Kemp not allegedly committed election fraud, he has perhaps embraced the myth more than the rest.

Two weeks after he said in early May he’d put Abrams in charge of combating voter suppression in an O’Rourke administration, he absurdly told “View” co-hosts that Abrams, who has steadfastly refused to concede the governor’s race and who tells anyone with a microphone that in reality she won it, had handled the “unfair, unlevel playing field” of the November 2018 election “with grace.”

He said this barely a month and a half after she complained to MSNBC that O’Rourke’s whiteness was a major factor in why he got so much favorable publicity in the aftermath of losing to Sen. Ted Cruz in November. This even though Abrams herself had also become a media/Democrat darling well before the November elections (she has remained so ever since).

Most recently, O’Rourke told a Massachusetts crowd during a campaign stop that Abrams would be governor if Brian Kemp hadn’t cheated to win:

“You know Brian Kemp was … did some very shady sh-t, basically and, you know, a lot of minorities, me included, who sent in an absentee ballot, my vote was not counted at the last midterm elections so what can you do about that?” [a rally attendee] asked.

“So we see this in every part of United States,” he continued. “Texas, until this last midterm election, ranked fiftieth in voter turnout. Not because we love our democracy less than you do here in Massachusetts, but because we were drawn that way. Not by accident, but by design. Based on your race and your ethnicity.”

A man from Georgia asked me what I will do about voting rights.

That’s because, were it not for voter suppression, Stacey Abrams would be governor right now.

We need a New Voting Rights Act, so every voice is heard and every vote is counted. pic.twitter.com/miXl7Xkq2n

Fellow 2020 presidential candidate and Sen. Amy Klobuchar (MN) also got in on the act:

Here's your Friday reminder that if the GA Secretary of State hadn’t been allowed to hold back 53,000 voter registrations, Stacey Abrams would be the Governor of Georgia right now. We have to stop the discrimination at the ballot box and restore the Voting Rights Act!

This falsehood has been debunked over and over by conservatives. But the liberal mainstream media won’t do their jobs by reminding Democrats that 1) they have no evidence to support their claims and 2) by their own standards they are undermining democracy by refusing to accept the results of an election.

Abrams herself has also said in the past that nominees who refuse to concede an election are dangerous:

Trump's refusal to concede the election if he loses proves he is a petty man uninterested in our national stability https://t.co/V1alhxLKmn

As Mike LaChance noted back in June, affirming Abrams’ delusions has become a rite of passage of sorts for 2020 Democrats like Beto. But because the national press won’t call Beto and other Democrats out on the lie (instead, they do their own coddling of Abrams), this tactic is unlikely to be dropped anytime soon – if ever.

What would you expect from an Irishman who pretends to be a Hispanic?

O’Rourke pretends to be a lot of things: Intelligent, caring, charismatic, honest, but as far as I know he does not pretend to be Hispanic. “Beto” is his honest nickname, which he’s had since he was a baby, and by which his family and friends have always known him; he did not choose it for any political advantage, since he was too young to even understand that concept.

There’s an article over at National Review claiming that Beto’s daddy gave him the nickname as a political ploy.

I think you’d have to be really sick in the head to dream about your kid becoming a politician.

Whether that’s accurate or not, the fact remains that O’Rourke came by the nickname honestly, and has never pretended to be Hispanic.

Either that, or the article is a bunch of hooey.

How did anyone with hat low an IQ ever win ANY election?? Seems like some rigging was going on to me.

I’ll see your Beto and raise you one AOC!

In 2018 he came terrifyingly close to becoming US Senator from Texas because of a titanic campaign war chest, a lackadaisical Cruz campaign and some Third World-level voting fraud in Houston, Dallas, San Antonio, Austin and the Valley.

Any reputable citations re: the voting fraud?

Intelligence is not a criterion for winning elections. Never has been.

Nor posting on an internet forum

So, does Psychedelic Warlord expect to hack an election fair and square just like was done to get Franken and other Democrats elected after they really lost?

Someone ruined a great horse’s ass when they put teeth into Beeto’s mouth.

After seeing his visage for the first time, I wondered if there was a toothless Osmond running around wondering what happened to their mouth.

notamemberofanyorganizedpolicital in reply to legacyrepublican. | September 9, 2019 at 6:16 pm

Yes, as they use to say: “He could eat corn on the cob through a wire fence.”

How is miserable puke any different from an early 20th century Trotsky-ite spewing sedition, lies, and anarchy amongst the civil society?

He’s not. This Robert Francis puke is a dangerous ideologue who needs to be eliminated from civil debate by any means necessary (politically speaking, of course).

Fortunately, his only superpower is table dancing, so his self-elimination is a distinct possibilty, but I worry about his calls to sedition and anarchy might plant the seeds for those not as ridiculous as Robert Francis.

Lev Bronshtein (oh all right, Trotsky) was a lot smarter than this turkey.

Lev probably would have been good on a skateboard, too, if he’d ever tried.

notamemberofanyorganizedpolicital in reply to tom_swift. | September 9, 2019 at 6:17 pm

Every democrat commie is a liar of large proportion.

The sick twisted commie beeto is just doing what his party requires.

Don’t lnow for sure who paid him to spout that Abrams stupidity, was it the DNC or Dimwits United?

Nobody. He came up with it all on his own.

To be fair, this is not the first time the Democrat Party has tried this. Just in my lifetime:

– After Reagan trounced Carter in 1980 a Carter administration official Gary Sick claimed the Reagan campaign ordered the revolutionary Iranian government to block release of the American embassy hostages.
– In 2000 Democrats claimed Al Gore was the rightful winner and came terrifyingly close to stealing the recount in Florida after several Democrat counties started a re-re-recount and miraculously discovered hundreds of heretofore uncounted ballots for Gore.
– In 2004 Democrats claimed John Kerry was the rightful winner of Ohio’s electoral votes (and the election) by claiming provisional ballots should have been counted, although the total number of these ballots was much smaller than Bush’s margin of victory in Ohio.
-In 2016 Democrats invented the Russian conspiracy hoax and are presently seeking to impeach and remove President Trump.

These examples are just at the presidential level. I am sure readers can supply examples of other races where Democrats tried to steal races they clearly lost.

notamemberofanyorganizedpolicital in reply to Recovering Lutheran. | September 9, 2019 at 6:20 pm

Those Democrats NEVER STOP Projecting exactly what they are already doing…onto their victims…..

So, Robert Francis O’Rourke, backs the imaginary governor of Georgia. Perhaps imaginary President Hillary Clinton will weigh in. I’m sure it will go to the Supreme Court to be decided by imaginary Justice, Merrick Garland.

This guy fell off his skateboard one too many times.

I used to call him Beta, but I think he’s Puto now.

I hope the “we’re mad as hell, and we’re not going to take it any more” generation votes isn 2020 and gets rid of any Democrat calling our election process into question. Democrats appear to believe it’s just fine to cast doubt on the process when they lose, with no proof or validation. Since we no longer have a free press (just a conglomeration of Democrat news outlets, no one will force them to prove their allegations.

Clickbait O’Rourke, saying anything that will generate a headline!

notamemberofanyorganizedpolicital in reply to BigDaveLA. | September 9, 2019 at 6:18 pm

Next week the MSM will be reporting O’Rouke was caught in bed with Mayor Pete no doubt.

Milhouse in reply to notamemberofanyorganizedpolicital. | September 10, 2019 at 2:40 am

They would never report that, even if it happened.