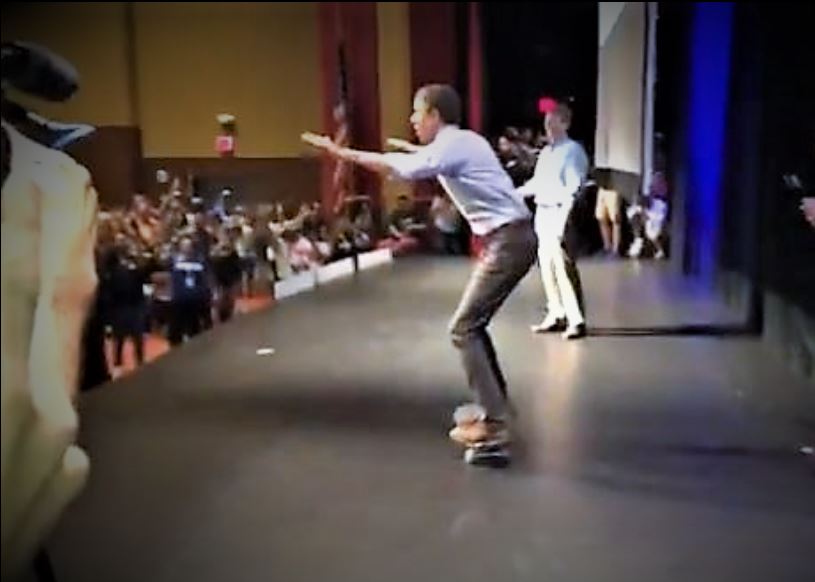 Robert O’Rourke’s campaign has announced that he raised $6.1 million in the first 24 hours of his candidacy for president, which is the most out of the 2020 candidates.

Sen. Bernie Sanders (I-VT) had the top spot at $5.9 million until now.

The campaign stated O’Rourke raised the money online and from all 50 states. From The New York Times:

Mr. O’Rourke’s early burst of fund-raising illustrates how much he has captured the imagination of many Democratic activists around the country, who propelled him to break financial records last year in his ultimately losing bid to unseat Senator Ted Cruz of Texas. There were some doubts as to whether those same grass-roots donors would also contribute to him when he was not facing Mr. Cruz — a detested figure on the left — but rather was one more entrant in a sprawling presidential primary.

Mr. O’Rourke’s money will, at least for now, quiet some of those skeptics: In a single day online, he raised nearly a quarter of what Barack Obama, then a senator, did in the entire first quarter of 2007.

We have to take the word of the campaign since the candidates do not have to fill out fundraising reports until the end of the month. The public will receive those findings on April 15.

This has to worry the Democrat Party, which prides itself on the minority factor. First off, poll after poll has shown the most support for former Vice President Joe Biden and Sanders. Now O’Rourke and Sanders have the best fundraising.

It has to terrify them that so many people, as of right now, favor the white men.

Question is, how long will the Democrat Party have to tolerate O’Rourke? Politico noted that O’Rourke drew in large crowds, but it didn’t go smoothly:

Four days into his presidential campaign, O’Rourke’s supporters are still stuffing themselves into coffee shops and living rooms across the Midwest to see the Democratic sensation as he motors east from Iowa to New Hampshire in a Dodge Grand Caravan. And O’Rourke by the weekend was moving deliberately to speak more specifically about policy, to hold more organized events and to mend his relationship with the media.

But for all the charisma and fundraising that could carry him far into the Democratic primary, a series of missteps in his campaign’s earliest days served as a reminder of how uncertain a prospect his star remains.

“For all the fanfare, the band was playing a pretty flat tune,” Dave Nagle, a former congressman and Iowa state Democratic Party chairman, said after watching O’Rourke address a large rally from the bed of a red Ford Ranger in Waterloo, Iowa. “There’s just no substance to it.”

O’Rourke couldn’t give many straight answers when it came to policy. He also offended some when he said that he sometimes helps his wife raise their three kids. That led to an apology and him admitting he has “white privilege.”

It doesn’t help that O’Rourke’s website is filled with merchandise and lacks his position on issues. I looked it up this weekend and found his website bland. I had to navigate news websites in order to find where he stands on issues. Those in Iowa noticed his lack of answers:

Some voters made it clear they wanted more from O’Rourke when it came to specifics — a dynamic that could become more pronounced later in Democratic debates later this summer.

In Independence, one voter opened his question to O’Rourke by noting that Sen. Elizabeth Warren, who is also running for the nomination, “is the gold standard of policy.” O’Rourke, the voter said, had been “doing a good job identifying the issues — but I don’t think any of us have heard any particular policies.”

Greg Batenhorst, the superintendent of schools in Mount Vernon, came to the Sing-A-Long Bar armed with a tough, specific question he had prepared for O’Rourke — about what he would do on immigration issues, a topic where he has struggled in the past on policy details. O’Rourke told Batenhorst he would immediately legalize DACA recipients and highlighted the bipartisan support for immigration reform — an answer that wasn’t enough for Batenhorst and his wife, Mary Lou.

Then came issues with the press:

And the media was there to see the exchange — after O’Rourke infuriated network and print reporters at the start of the campaign. His staff initially refused to provide basic information to many outlets about events, and they told some reporters that events were closed to the press — or forced them to leave — while allowing others in.

The campaign left a crush of press in the dark even about O’Rourke’s first stop in Iowa — the first public appearance of his campaign.

Who knows what will happen, but it seems like O’Rourke is learning as he goes. As his campaign continues, it will be interesting to see if his fundraising remains strong.

This money thing is fascinating.

So many candidates are rich, already. That they are having a fund-raising race speaks volumes. They understand that the money tree has only so much fruit, and when it’s gone, it’s gone. Too bad for the under-funded. Campaign free-speech is finite, and expensive.

Money is power and influence. A candidate’s perceived strength is now being determined by the size of their initial cannonball into the pool.

It looks like the folks with the least money will never even have a chance to garner name recognition, and are being all but ignored by the msm already.

If the dems are looking to spend big bucks this early, they may not have enough of other peoples’ cash left to fight the main event.

The DNC is broke, that’s why.

Plus, this is their slush fund. They try to accuse Trump of the same because they know the dirtiest tricks in the book.

Fundraising seems to be disconnecting itself from viability more and more. It’s much easier to raise money than to be a viable candidate.

So we have Bernie the socialist, Joe the groper, and Beto the Ted Kennedy clone.

This year it will be women who find out what it was like for Bernie.

Bad publicity dumped all over this hacker, child-murder-fantasy weirdo and guess what? No one on the left cares.

A lot of stupid people want this doofus as their leader. He is a legit threat.

I’m amused at the desperation of the bad publicity – all of which is coming from the left. Beto’s suddenly not so adorable and harmless to them anymore.

Of course you will find (D)s trying to take him down. Primary season is coming up. Same thing happens on the (R) side.

He raised more money in 24 hours than any other (D). I do not understand why anyone blows this guy off.

No, I agree… this guy with Bobby Kennedy’s teeth is like Christ come to cleanse the temple for these whacked out Democrats, many of them dope addled, and hoping for a return to the “Age of Aquarius”.

Could it be that the globalists are simply choosing (buying) their candidate? The others can’t “compete” against the big bucks. Nothing is uncontrolled by a leftist.

Trump is in office because the leftists were arrogant and obviously over confident. I suspect they are calculating carefully.

They bought soulless HRC. They like Beto, now. I wonder why? Because he will be a soulless puppet?

Watch the process carefully. His fundraising is not “by chance.”

There is a script.

An economic quickfix (e.g. Obamacare), the diversity of another (i.e. color or race), preserving the wicked solution (i.e. selective-child or planned parenthood), redistributive change (e.g. tax deductible commerce and exchanges), social justice wars and immigration reform, and a viable replacement for the “boyfriend” Obama are in demand.

He can’t play a sax, so a skateboard is all he’s got. Wow, that’s soooo sexy. I mean I guess it’s better than sitting in a tank, right?

Beta, what a doofus.

What is it with this guy and his skateboard? Are voters supposed to be impressed that he has a skill most of us had mastered by the age of 8? What’s next, his pogo stick, his slip-n’-slide?

When someone becomes a man, they are supposed to put away childish things. Apparently, Robert Francis didn’t get the message — or perhaps he just hasn’t become a man yet.

Just proves the Democrats is the white male party no female candidates welcome.

This proves the wage gap!

I smell a rat. Beta is Obama’s chosen, is most likely the beneficiary of his campaign machinery and is running a campaign with much the same vacant rhetoric as his benefactor. Since November, 3 Silicon Valley tech firms have chosen the very unlikely location of El Paso to relocate to. Having lived there, it’s just not a great place for tech.

“In the age of digital contributions, fraudsters can deploy so-called robo-donations, computer programs that use false names to spew hundreds of donations a day in small increments, in order to evade reporting requirements. According to an October 2008 Washington Post article, Mary Biskup of Missouri appeared to give more than $170,000 in small donations to the 2008 Obama campaign. Yet Biskup said she never gave any money to the campaign. Some other contributor gave the donations using her name, without her knowledge. (The Obama campaign explained to the Post that it caught the donations and returned them.)

This makes it all the more surprising that the Obama campaign does not use a standard security tool, the card verification value (CVV) system—the three- or four-digit number often imprinted on the back of a credit card, whose purpose is to verify that the person executing the purchase (or, in this case, donation) physically possesses the card. The Romney campaign, by contrast, does use the CVV—as has almost every other candidate who has run for president in recent years, from Hillary Clinton in 2008 to Ron Paul this year. (The Obama campaign says it doesn’t use the CVV because it can be an inhibiting factor for some small donors.) Interestingly, the Obama campaign’s online store requires the CVV to purchase items like hats or hoodies (the campaign points out that its merchandise vendor requires the tool).”

The article also gets into the means with which lots of overseas donations were able to slide through the pipeline with no scrutiny. Beta could easily run a campaign with all the cartel money sitting around El Paso needing to be laundered.

All this means is that whoever is shoveling money to the D’rats this time prefers these particular candidates. Maybe they think the women are useless, or unreliable, or whatever. But obviously I don’t credit that crap about “how much he has captured the imagination of many Democratic activists around the country” any more than I did the story about Chinatown dishwashers of no fixed abode throwing millions of small donations at Hillary, or the Obama campaign’s “inadvertent” lack of records about his “small donations”. Somebody somewhere in the world wants to D’rats to win the White House, and they’re certainly not going to tell us who. Shoot, it could even be Vlad.

Simply reaffirming the concept that fools and their money are soon parted.

Can he legally change his last name to “Kennedy”, or at least self-identify as a Kennedy?

Ok, how about breaking down this $6.1 million. How many donors? A few elite billionaires from CA or a broad section of supporters?

Whiter than white rice seems to be the requirement for Democrat voters. Sorry about that all you wanna be President people of color.