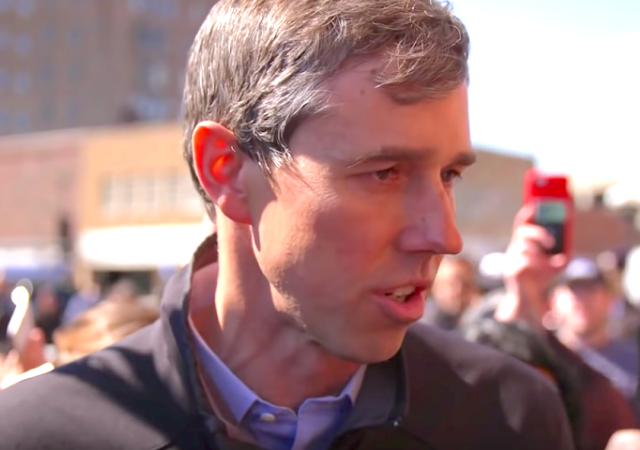 What Beto O’Rourke lacks in policy chops, he seems to make up for in fundraising abilities. During the 2018 midterms he amassed a war chest of $80 million dollars. After officially launching his 2020 presidential bid, he raked in over $6 million in 24 hours.

Now Beto has attracted some of Obama’s top funders and a former Obama aide.

A leading Democratic bundler who helped former President Barack Obama raise money during his two presidential campaigns has been indicating to friends that he’s likely to support Beto O’Rourke in the 2020 race, CNBC has learned.

Mark Gallogly, the co-founder of investment firm Centerbridge Partners, has signaled to associates that he’s likely going to help O’Rourke, a former three-term congressman, in the presidential fundraising battle, according to people who have spoken with him in recent weeks.

Gallogly became fond of O’Rourke during his midterm contest with Sen. Ted Cruz in the deep-red state of Texas. The donor backed O’Rourke in 2018 and wrote two checks each worth $2,700, one for the primary and the other for the general election, Federal Election Commission filings show.

Gallogly is not the only major Obama donor throwing his support to Beto.

Gallogly is joined by Louis Susman, an investment manager and former banking executive who raised enough money for Obama in 2008 (at least $500,000) to be named his ambassador to the United Kingdom. Before O’Rourke even announced his candidacy, Susman, who is married to Goldman Sachs scion Marjorie Sachs, was reportedly reaching out to other wealthy Democratic donors to gauge their interest in the candidate. Susman was also a max donor to O’Rourke’s failed Senate bid.

In recent months, there have been rumblings about Beto being the “white Obama.” People who like Obama have seemed to confirm this through their actions. Beto is even hiring a former Obama aide to run his campaign.

A week after launching his presidential bid, Beto O’Rourke is poised to hire veteran Democratic strategist Jen O’Malley Dillon to lead his campaign, officials familiar with the discussions told CNN, a move that puts a former top aide to President Barack Obama at the helm of the O’Rourke campaign.

O’Malley Dillon, a deputy campaign manager for Obama’s re-election effort in 2012, met with O’Rourke earlier this month in Texas before he jumped into the race. Since then, the campaign raised more than $6 million on its first day and the former congressman from Texas embarked on a tour of a half-dozen states.

Beto may not have beaten Cruz in 2018, but he got close enough for many Democrats to take notice. It’s no secret that Democrats have long dreamed of flipping Texas blue. That is surely driving some of this support to Beto.

The more Beto becomes a known commodity, the emptier he appears. Like an Obama without the Hope and Change. Thank goodness he has his wife’s money to fall back on.

Well, they obviously also embrace O’Rourke’s convictions for burglary, DWI, leaving the scene, and his confession of belonging to a large internet hacking group.

What convictions? He’s never been convicted of anything.

He’s got an arrest record

and the cases appear to have been pled out.

The DWI charge was pled out. He was never charged with leaving the scene. The burglary charge was simply dropped; the university decided not to press charges.

I am becoming more and more convinced to the actual fundraising ability seems to be increasingly disconnected from political viability. It seems to be being delinked from winning races. I mean, one needs to meet a minimal threshold, but there are too many ways to get yourself out there now.

My rule of thumb is that whoever shows up this early is not going to be the candidate.

Imagine him winning the ticket

Democrats sure love their candidates with those Ted Bundy good looks, looks so good unsuspecting females eagerly jumped into his car and rode off to their doom with him.
They do know the Democratic constituency.
Overheard during the week after the 2008 election “He was young and looked cool, so I voted for him.”

I would not write Beto off. He almost beat Cruz in Texas. Polls show him and Biden capable of beating Trump. The only good news is he is probably too “moderate” (using that word lightly) to win the Democratic primary this election cycle.

Lol! Send in your money, young and hip suckers. We know you won’t send in your money or personal data for the more mature candidate we intend to roll out in the future. So for now, we present to you …Beto the clown. Click here to support.

A prediction: This will be the most (monumentally) expensive primary season ever.

It’s starting early, with a lot of polarization within the dem party. I wonder how many crazy lefties will simply stay home when their favorite is eviscerated in the primaries and debates.

Every dime wasted by the also-rans is that much less money available for the main event. After the first debate, the steel cage chainsaw death match will ensue. I can’t wait for the possible backlash from the AIPAC boycott.

Please don’t use “beto” even if some of his cheer leaders do. His name is Robert Francis, aka Bobby. He is about as ‘hispanic” as chow mein.

And his nickname for all his life has been Beto. He’s had it longer than Cruz has had “Ted”, which he adopted in high school.