But I thought he ruled it out? 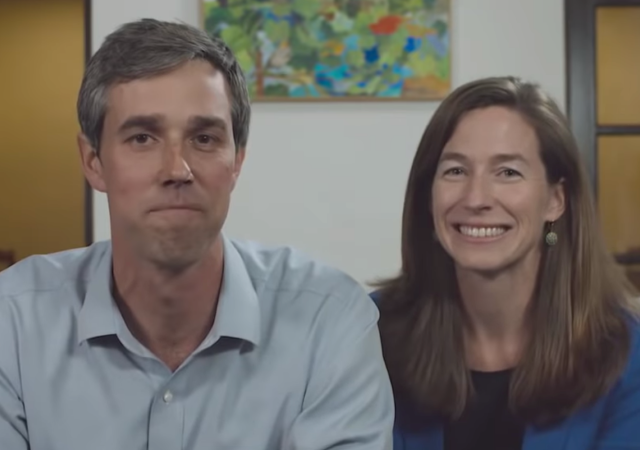 On Wednesday night, former Democrat Texas Rep. Robert O’Rourke texted KTSM in his hometown of El Paso, TX, to inform the station that he is running for president.

O’Rourke made it official on Thursday morning with the launch of his website and video that urged “Americans to look past their differences in order to confront the challenges facing the country.”

O’Rourke released a video with his wife by his side to announce that he is seeking the Democratic nomination. From CNN:

“This is a defining moment of truth for this country and for every single one of us,” the 46-year-old Democratic former congressman from Texas said in a video announcing his candidacy. “The challenges that we face right now, the interconnected crises in our economy, our democracy and our climate have never been greater.”

“They will either consume us, or they will afford us the greatest opportunity to unleash the genius of the United States of America,” he added.

O’Rourke gained popularity in 2018 when he challenged incumbent Texas Republican Sen. Ted Cruz. He raised over $80 million and showcased the power of social media.

He lost to Cruz by 200,000 votes, but Democrats pushed him to run for president. He told 60 Minutes that he ruled out the possibility of him running in 2020.

Beto O’Rourke is running for president

This contradicts what he promised last year:

“I’m not looking at 2020. In fact, I’m completely ruling that out. Not going to do that…Win or lose, I’m not running in 2020…Since people have asked, the answer’s no”pic.twitter.com/0fTVFxC9o1

Yeah, that didn’t last long and did anyone honestly believe him? After he lost to Cruz, groups urged O’Rourke to run for the presidency. He kept up his presence on social media, live streaming a visit to the dentist and documenting his travels across the country on Medium.

O’Rourke ruled out challenging Republican Texas Sen. John Cornyn two weeks ago. He also said he decided on his presidential ambition, but only said he would announce soon.

He remained mum at SXSW when he attended a documentary on his 2018 senate run.

The 2020 Democratic presidential field continues to grow, but the leader in polls is former Vice President Joe Biden, who has not announced his candidacy. A Morning Consult poll from last month had Biden at 31% and Sen. Bernie Sanders at 27%. After them is a YUGE drop off. Sen. Kamala Harris is in third at 10% and O’Rourke in fourth at 7%. 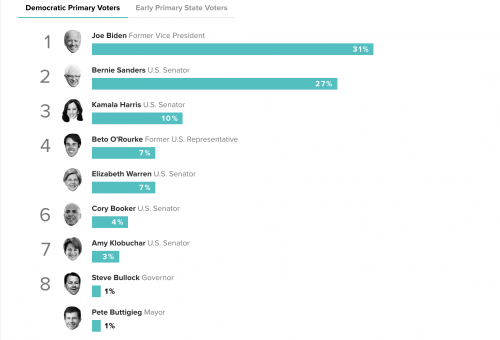 A poll from CNN, the Des Moines Register, and Mediacom on March 10 revealed Iowans prefer Biden and Sanders with Sen. Elizabeth Warren coming in third. O’Rourke is once again in fourth. 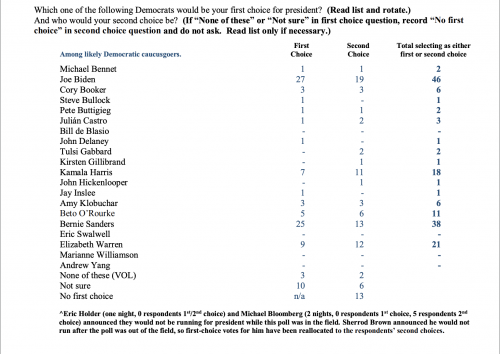 I don’t know about the public, but the media has continued to fawn over the Democratic rock star. Vanity Fair ran an expose on O’Rourke, which came out this week.

“Man, I’m just born to be in it.” Beto O’Rourke seemed to come from nowhere to the brink of a presidential candidacy—but he’s been on this journey for his whole life. O’Rourke spoke with Joe Hagan. Photographs by Annie Leibovitz. https://t.co/WhmQGZnbUg pic.twitter.com/a7DCoaZdtd

Logan Dobson had an excellent thread on Twitter that showed the media love for O’Rourke in the past year. You can expect it to get worse.

finally, the ALL TIME GOAT:

“On a dusty road in southwestern Texas, Beto O’Rourke leans out the window of the Ford Expedition he’s driving and mutters, “You gonna let me pass you, state police?” He speeds ahead of the cruiser while chewing an empanada.”https://t.co/TrqUDIULmb

“Beto O’Rourke, an occasional member of Los Diablitos de El Paso sandlot baseball team, looked pathetic in his first two at-bats last Sunday at the Long Time, a diamond in Austin, Texas. Both were strikeouts. The first one was on three pitches.”https://t.co/l13uwHDQ2W

notamemberofanyorganizedpolicital in reply to legacyrepublican. | March 14, 2019 at 5:47 pm

Call him by his honest given name, Robert Francis O’Rourke.

Just like Sandy is the given name of that NYC SOC Puppet in congress now.

legacyrepublican in reply to notamemberofanyorganizedpolicital. | March 14, 2019 at 6:39 pm

Part of me agrees with you.

The Irish part of me thanks the Good Lord that people think he is hispanic.

if the #MFM were honest, his nickname would be “Beta”, not “Beto”.

he’s just another dishonest Demonrat hack, in a field full of them: he fits right in with Fauxcahontas, Bernie the 3-House Socialist, Joe “The Perv” Biden, and all the other swine.

But how many brain dead leftists will fall all over themselves voting for him?

The scariest answer may be: As many as voted for another phony Community Agitator just like him with NO accomplishments, NO experience, and who obviously hated the United States: Barrack Insane Obola.

And finishing second to him, may be yet another Gigolo just like Beto who looked nice and talked big, but thanks to those who knew him best, i.e., the Swift Boat Veterans, got outed to be another Media creation: John Forbes Kerry.

A fake Mexican to go with the fake Native American and Bern “Socialism for thee but not for me” Sanders (I could go on and on). What a Democrat field for 2020!

Not since Ted Kennedy have we seen a candidate so driven

notamemberofanyorganizedpolicital in reply to Petrushka. | March 14, 2019 at 5:48 pm

You mean DRIVEN OFF A BRIDGE INTO DROWNING DEPTH WATER
don’t you?

Why else did so many drop out and Robbie was ordained by noobama himself?

The blacks will vote 99.9% for her and the millennials will vote in fleeces for the fake Mexican’t

I live in Texas, people still have their signs, t-shirts, and car stickers

They are complete idiots

China and Russia will eat our lunch

The border will be no more

Learn Spanish because we will be done

Can you imagine those two in charge of our nation?

I know, in name only, but their handlers will be the end of America, the end of the free world

And the stickers are on the paint. smh

notamemberofanyorganizedpolicital in reply to gonzotx. | March 14, 2019 at 5:49 pm

Forget the polls. The DNC will rig the primaries for whoever they pick.

Beto is the white Obama, convinced it is his destiny to save the world. Another delusional communist narcissist.

No Obama. Okay Nolte, you win.

As much as I’d like to dismiss idiots like O-Rourke and AOC, I recall chuckling when Reagan ran in ’80…then won. And I recall my annoyance with Trump running in ’16, thinking that he was detracting from the serious contenders.

Just like we treat every gun as being loaded, we should treat every Commie the left advances as being the potential candidate. It hasn’t been in our nature to be so aggressive against the left, but I think it’s safe to say that one of the lessons the past three years has been that going after the competition swiftly and excessively is far more effective than sitting back and shaking our heads in silent disapproval.

Hamstring each donkey at the earliest opportunity.

With the Central Committee running the show, being President becomes a figurehead position. The dimmest stars of the Democrat Party are on a level playing field. Just have to pass the audition first.

Are the swing states that voted for Trump better off than they were in 2016 or will MSM convince them that they are worse off and its the orange man’s fault?

That’s all that matters.

Not to discount Trump, but Hillary was pretty easy to NOT vote for.

Beto is the empty suit that Obama was back in 2008. But at least Obama had a winning record in getting elected (Ask Jeri Ryan’s ex husband about those unsealed divorce records affecting the Senate Race…)
The donkeys are consistent in the way they act. They try the same old playbook ad nauseum. They think they can get Robert O’Rourke elected the same as Barry Soetro was elected. (Name change to sound ethnic, glowing press, well written speeches, and fainting women at the rallies). I don’t think people will fall for that again. Then again, stupid does stupid.

notamemberofanyorganizedpolicital in reply to CaliforniaJimbo. | March 14, 2019 at 5:52 pm

Did a Rich Arab Sugar Daddy get Bet-0 into college and pay his way like they did Obama’s too?

He air drums to songs waiting at the fast food drive-thru take out.

He drops the f-bomb in public speeches.

He speeds while chewing on empanadas. (At least he’s sober.)

My gaaawd. Is there anything he can’t do?? He really seems like the kind of guy you’d want to have a beer with. I mean, the media wouldn’t have that in mind, would they?

notamemberofanyorganizedpolicital in reply to LukeHandCool. | March 14, 2019 at 5:50 pm

From the land of Senator Kyrsten Sinema I advise taking every loon seriously. Very seriously.

I concur with your assessment. I live in a North Dallas suburb. Beto nearly beat the odds in texas, a very solid red state.

He ran very good ads, presents himself as very likable (at least on the TV ads). He will attract every single democrat/progressive, and will attract a very high percent of the millenials.

He is to the left of B Sanders but with a lot more persona.

he will be formatible – similar to Harris, Booker & Michelle.

Mid-Cities myself. So, just around the corner from you.

Beto did well due to a combination of things.

One, Cruz wasn’t expecting a challenger like him to show up, so he wasn’t raising enough money early on. This allowed the perception that Cruz was taking his seat for granted and was vulnerable.

It didn’t help that every call I got from fund raisers sounded like he was panicking. They were incredibly depressing phone calls to get. So bad, in fact, I stopped taking them.

Two, Beto received a ton of money from outside the state from anti-Trump contributors. This created a problem in that Cruz had to wait to the end of the race to spend the funds needed to fight the hardest. Had he been properly financed from the get go, he would have been fighting for the whole election cycle, not just at the end.

In some respects, the later was good because Beto sucked up a lot of Democratic money needed elsewhere.

If there is any good news to be gleaned from this last election, it is that Senator Cornyn and the republicans her are not relaxing anymore and aren’t going to be caught sleeping like Cruz was last year. I anticipate that Cornyn will run a much more positive campaign than Cruz did.

Bob the fake Mexican added the nonsense of only 12 years before we all perish stolen from his brain dead twin.
Two thing Bob.
1. If we round up the illegal aliens and toss them back across the border and build the wall to keep them out our energy consumption will go way down and we will be contributing mega tons less of gloBULL warming. Win, win right Bobbi?
2. As one post on another site put it – “If we’ve only got 12 years left I’ve got to get real busy and get a whole lot of payback in before we go”.

His wife’s smile is uneasy and looks forced.