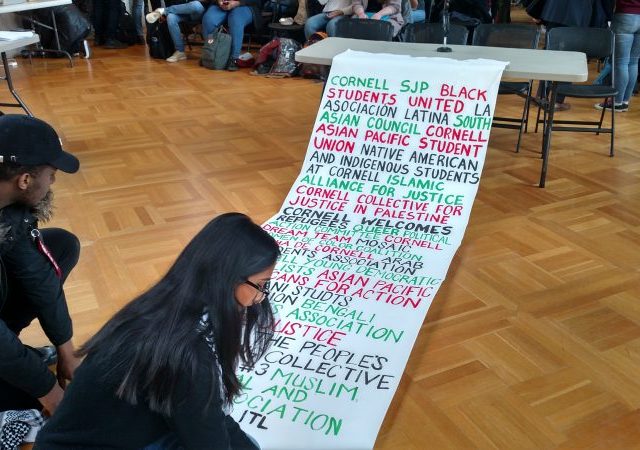 When a coalition of student groups at Cornell University, led by Students for Justice in Palestine, recently tried to pass a divestment resolution against certain companies doing business in Israel, a couple of interesting things happened.

First, as is now a common tactic, the dispute was racialized to portray it as a coalition of “students of color” against the white supremacist (Jewish) Israelis.

The key strategy and tactic used this year, which is from the SJP playbook, was to call for divestment from Israel while at the same time denying that the resolution was part of the Boycott, Divestment and Sanctions (BDS) movement. Call it BDS-lite — the strategists at National SJP and their helpers know that BDS is toxic, so they do BDS without calling it BDS.

Why run from BDS they way they did? It’s because BDS is becoming more and more toxic. It is a movement that repackages the century old Arab and Muslim boycott of Jews in the ‘social justice’ lingo of the left. I documented this transformation of messaging in The REAL history of the BDS movement.

There is a growing international recognition that BDS is just the newest form of the oldest hate. The German parliament’s recent resolution condemning BDS as anti-Semitic, together with student government resolutions at several major German universities, has sent a powerful message.

BDS has gained a foothold in the Democratic Party, with the Democratic Socialists of America and rising stars like Rashida Tlaib endorsing the movement. The campus anti-Israel movement (however it denominates itself) is not reflective of American public opinion as a whole. We’ve explored many times how polling shows continued overwhelming support for Israel, with liberal Democrats being the exception to that rule. This should be taken seriously, but we should not lose the overall context.

A recent poll confirms the overall support for Israel. More significantly, it shows that the public increasingly is viewing BDS as anti-Semitic.

The Hudson Institute released new polling data this week showing most Americans favor a close relationship with Israel and believe the Boycott, Divestment, and Sanctions (BDS) movement against Israel is anti-Semitic.

Fifty-one percent of those surveyed held a favorable opinion of Israel, while only 21 percent held an unfavorable opinion. An even greater number—75 percent—agreed it is in America’s interest to have Israel as its closest ally in the Middle East….

You can view the full polling data here.

Based on these findings, it’s not surprising that campus BDS now pretends not to be BDS. The common tactic of shouting-down and disrupting pro-Israel speakers has backfired.

These results do not mean that the BDS threat is over. While a significant percentage of the people supporting BDS are ignorant dupes or misguided, the leaders are manipulative and bad people who know exactly what they are doing by stoking racial hate and anti-Semitism for use against Israel.

Here is McLaughlin’s presentation of the polling data and results:

Here are some key screenshots. 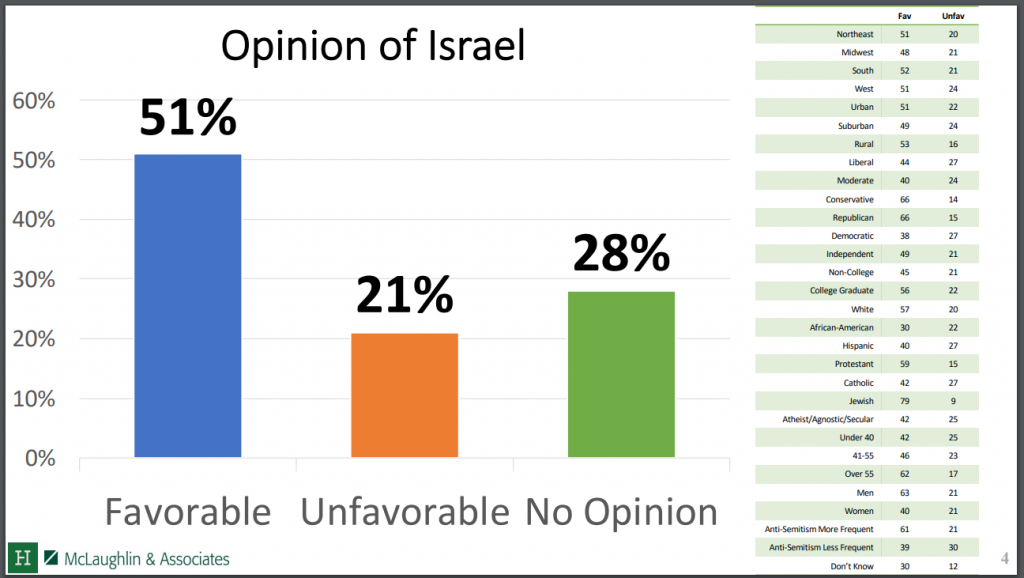 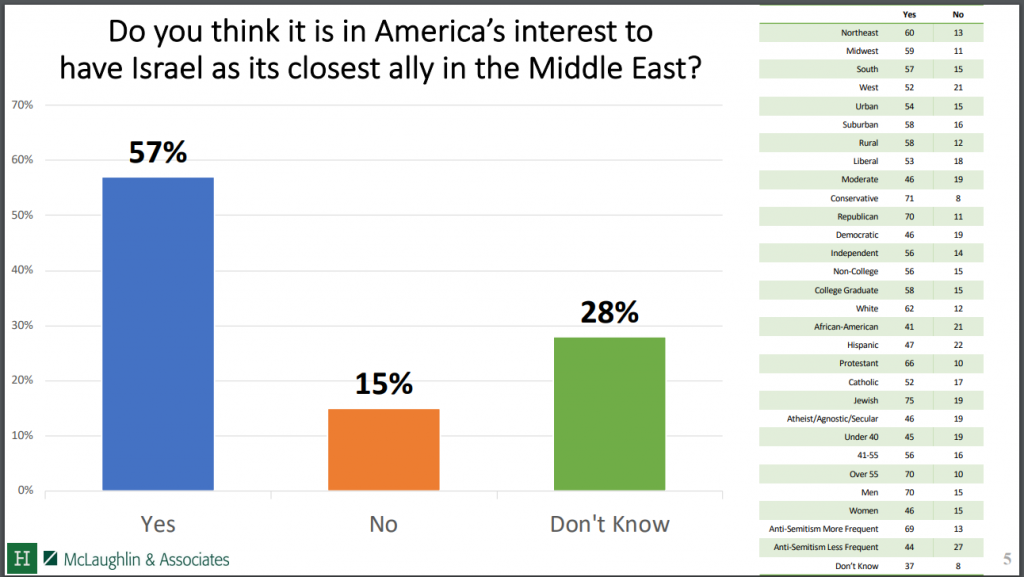 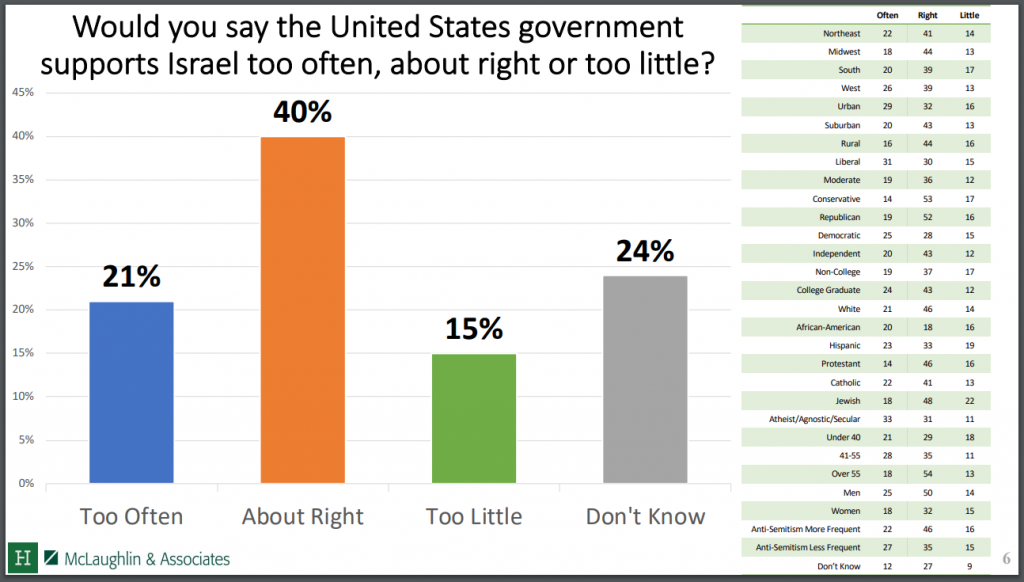 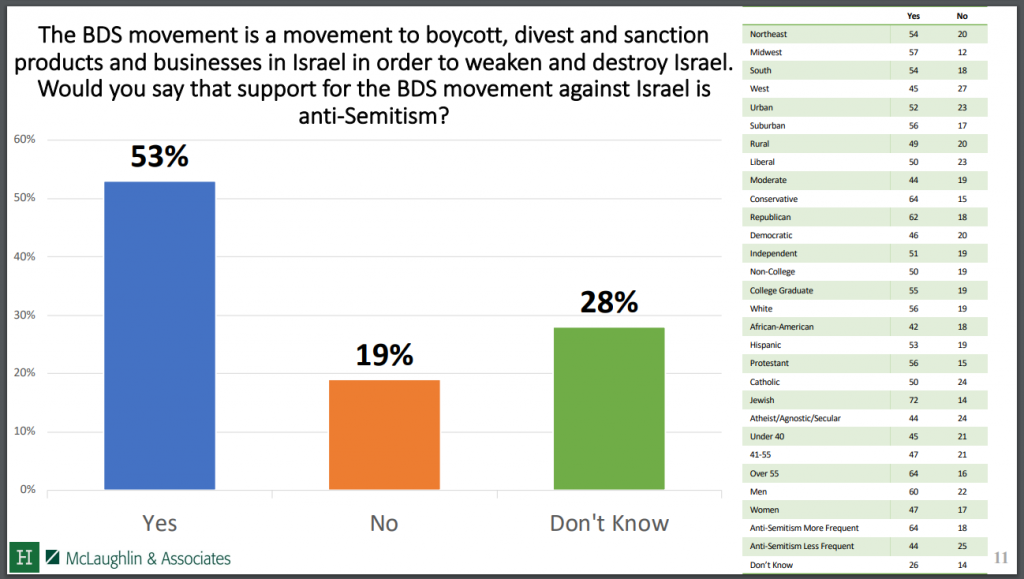 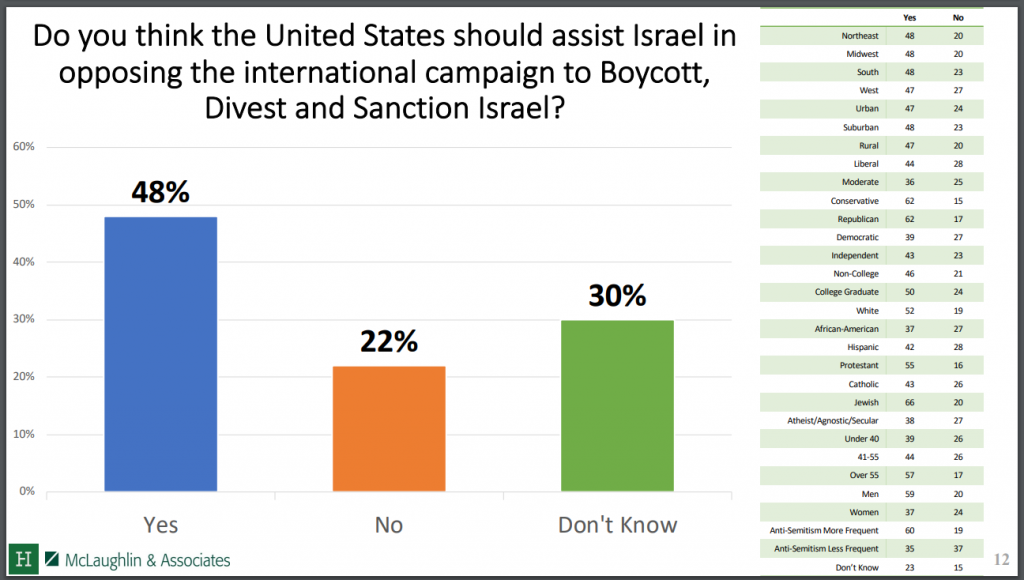 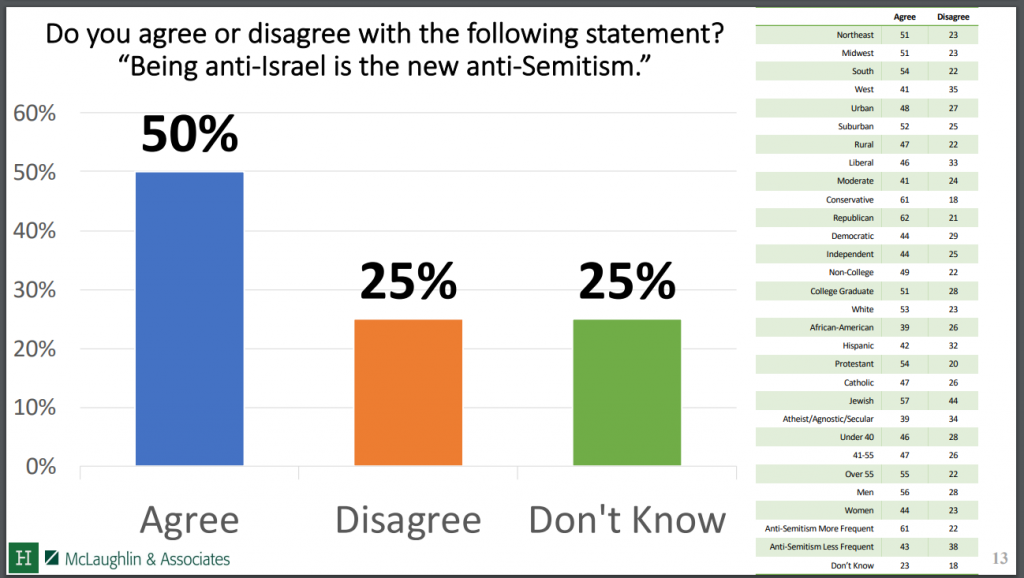 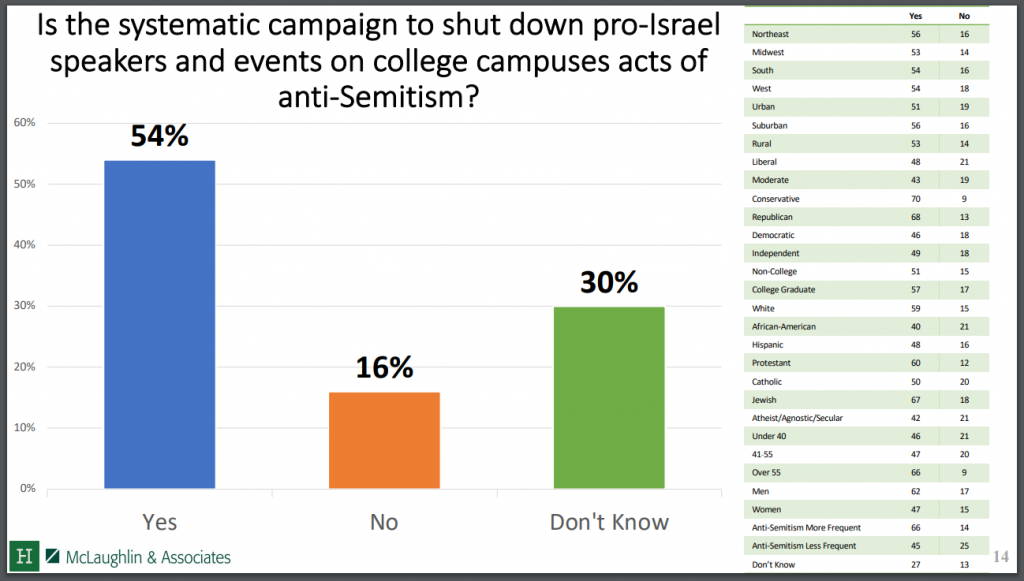 Everyone but politically active Jews seem to get the obvious. My family does.

This is a very dangerous game. It is one thing to hate and wish the destruction of an entire people. It is another to disagree on foreign policy or politics.

Racism used to mean supporting slavery or Jim Crow. Now it means you don’t want Somali muslim refugees who are illiterate in their own language and can’t speak English in your town. Or it means you don’t like what the minority mayor of, e.g. Detroit, Baltimore, Selma is doing, appointing cronies while things decay.

You might see these polls as a good sign – that anti-Zionism = Holocaust. I see it more as anti-Semitism = disagreeing with Jews on anything. Even voting for Hillary instead of Trump.

Worse, this will easily go too far. Recently the Israeli Ambassador to the UN said anti-Semites should be in prison. Link that with a recent debate over a verse in the New Testament, and if you take it literally, it was called anti-Semitism.

Not unlike quoting Leviticus in Canada gets Christian preachers arrested and imprisoned. If Jews try to overturn the 1st Amendment – those opposed to imprisoning them for anti-Semitism, i.e. political speech? Like the Loyalty to Israel oaths Texas tried (but were overturned – they don’t even require loyalty to the USA).

“Anti-Semitism” is already fading into meaning “political speech that disagrees with Jews”, like “racism” does with blacks and other minorities.

I do not think you shall find a word to replace it that will mean what you want it to mean. When you cry “wolf” at poodles and chihuahuas eventually your words will cease having force. Even when a real wolf appears.

Meanwhile the American media yawn at congresswomen Omar’s and Tlaib’s anti-Semitism and accuse just about anyone calling attention to it of incitement to violence against them.

Al Sharpton has his own TV show on a major news network.

Quite a few countries that should be ahead of Israel on a list to boycott, divest, and sanction … but these activists single out Israel.

One can criticize Israeli policies all he wants without calling for it to be singled out for economic destruction.

We see in Europe clear evidence that some people are not suitable for western civilization, we should immediately expel any noncitizen promoting BDS.

The Supreme Court Justices for the BDS: The Curious Case of Omar Shakir!

Just use the translate button at top right

“The actual authorization given by the court to the boycott activist to remain in Israel is a classic example of activism that detracts from the content of the law and the legislator’s intent”
…….
understand why. This ruling contradicts all legal logic and seems to have no justification other than the political views of the judge. After all, there is nothing that prevents Makkir from conducting the trial from a distance, as many others do, through legal representation that already exists in Israel. Justice Vogelman effectively annulled the provisions of the law – Shakir’s term of leave has long passed but the High Court issued him his own visa.”