Anti-Israel Democrats can’t accept that American politicians support Israel because Americans support Israel, not because they’ve been bought off with ‘Benjamins’ or are disloyal to the U.S.

The Democrat Party is trying to come to grips with the antisemitic agitation by Minnesota Rep. Ihlan Omar, backed by Reps. Rashida Tlaib and Alexandria Ocasio-Cortez, that Americans who support Israel do so for money and have pledged allegiance to Israel.

These dual-loyalty and disloyalty accusations are echoed by left-wing and Islamist Democrat activists.

These findings reinforce a point I’ve made many times. The so-called “Israel Lobby” is the American people.

Gallup just released its 2019 report, and finds that support for Israel over the Palestinians has dropped slightly, returning to the level in 2009. This drop was largely due to a drop in support among Republicans, which is hard to understand. So we’ll have to see if this is a blip, or a long-term trend. As other polling has showed, the weakest support for Israel comes from liberal Democrats.

These results are based on Gallup’s annual World Affairs survey, conducted each February. The 2019 poll was conducted Feb. 1-10 prior to Minnesota Rep. Ilhan Omar’s recent remarks questioning U.S. support for Israel and suggesting that some supporters of Israel are pushing for “allegiance to a foreign country.” …. 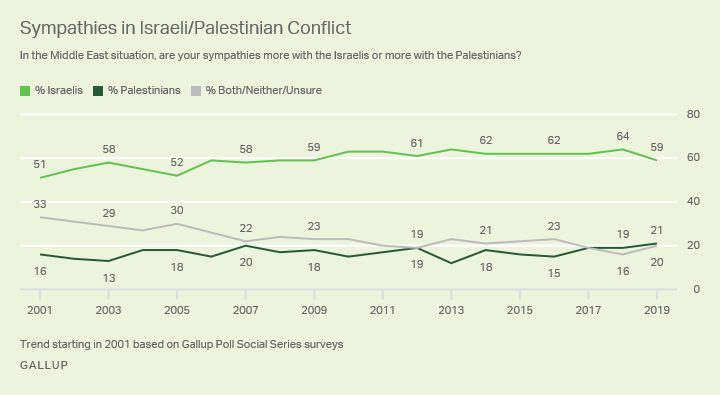 It’s important to put this in historical context. The Gallup 2019 report doesn’t have the chart going back beyond 2001, but the 2018 report had longer historical data. That’s one of the benefit of using Gallup rather than other polls, they have been asking the same question for decades, so regardless of you accept their polling methodology, the trend is what’s important since the methodology hasn’t changed.

The historical data since the late 1980s show much weaker support for Israel than today, so the long-term trend is in Israel’s favor: 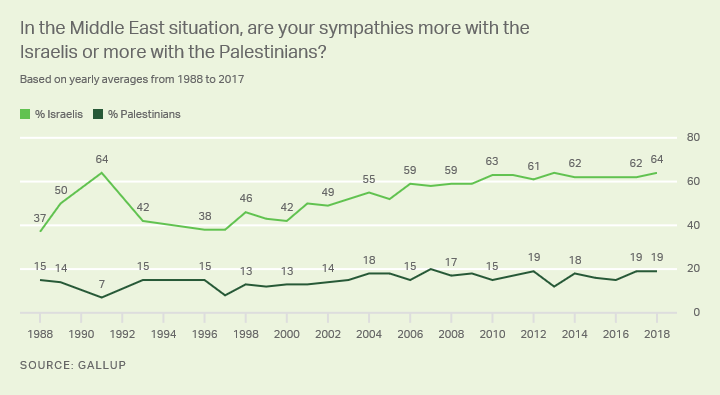 Gallup found the drop was sharpest among Republicans. That makes no sense, but the poll is what it is:

The slight decline in U.S. sympathies toward Israel in the past year can be explained by drops among both major party groups.

The percentage of Republicans saying they sympathize more with Israel in the conflict fell from an all-time high of 87% in 2018 to 76% today. Last year’s reading was taken as the Donald Trump administration was preparing to move the U.S. embassy in Israel to Jerusalem, a change that highlighted Trump’s strong support of Israel.

The percentage of Democrats siding more with Israel fell less sharply, from 49% to 43%; however, today’s figure approaches the lowest level of Democratic partiality toward Israel since 2005….

In terms of recent changes, however, most of the decline in net sympathy for Israel has occurred among liberal Democrats, from +17 in 2013-2016 to +3 in 2017-2019. What this means is that nearly as many liberal Democrats now sympathize more with the Palestinians (38%) as with the Israelis (41%), with the rest favoring neither side or unsure. 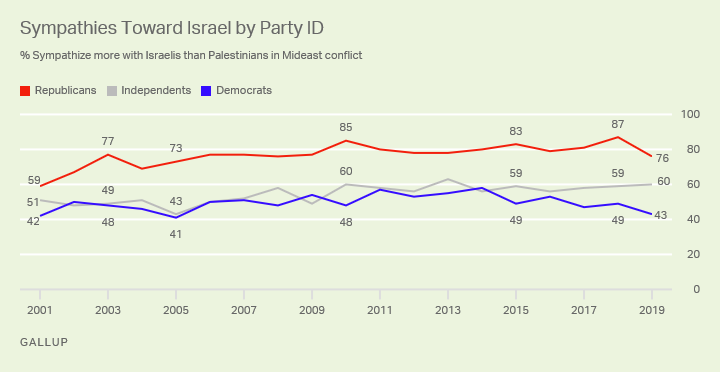 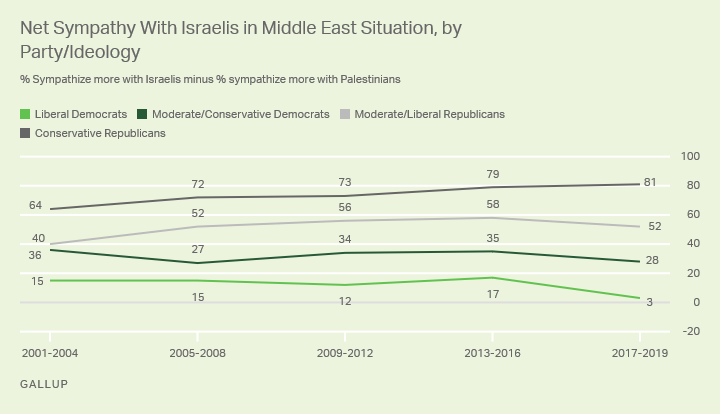 The BDS campus activists have moved into the media and Congress. They are pushing their anti-Jewish conspiracy theories harder than ever, and are in the process of destroying the Democrat Party from within as it did to the British Labour Party. 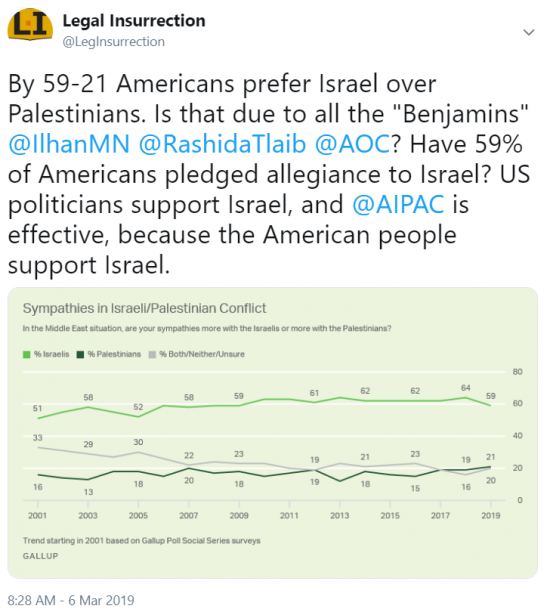 Democrats let the antisemitic BDS barbarians inside the gates, now they can’t remove them.

Fortunately, there’s little evidence that the Leftist-Islamist anti-Jewish dual-loyalty and disloyalty charges have spread to the general population.

“Democrats let the antisemitic BDS barbarians inside the gates, now they can’t remove them.”

Maybe, maybe not, but it surely will be fun to watch!

The more of these degenerates which join Democrats, the more Democrats which desert the party.

I can see why the D party values highly prolific comparatively dull witted members who will increase their numbers by 3.5 to 4 fold for a short term gain. What I cannot understand is their not realizing consequences which will occur in one or two generations.

I worked at the 2012 Democrat Convention in Charlotte. And, I saw the Delegates openly booing the Jews and the Jerusalem Issue. And, it was clearly half of the delegates present for the session.

That was 7 years ago folks. It has only goten worse. This is NOT a small segment of the Party.

And why Chuck Schumer will NEVER lead the Senate!

I agree — Jew-hatred (under the fig leaf of “anti-Zionism”/anti-Israel venom) has been totally enabled and mainstreamed in the contemporary Dumb-o-crat Party. This is partly an outgrowth of the long-festering anti-Semitism that has been widespread in black and black Muslim communities, but, this phenomenon has now merged with contemporary Leftist “intersectional” propaganda and the myth of Muslim/Arab “Palestinian” victimization, which constitutes one of the most sophisticated, despicable, yet, undeniably successful propaganda campaigns in modern world history.

The left’s desperation to define victims and oppression/oppressed peoples is so out of whack now that they seem unaware of the repercussions. Corbyn and his party in the UK were the bellwether for this anti-Semitic trend we now see here. Some Dems in the U.S. are perhaps unconcerned about the consequences, though.

It’s almost as if the entire progressive movement depends on finding inequality even by redefining and ignoring data and “science” (sarcasm).

The infantile stupidity of the Left’s “victim”-“oppressor” calculus defies belief. The entire rubric is fact-averse, theology-averse and history-averse and relies entirely on assessing the relative power of the actors at issue. Ergo, because Israel is militarily strong and economically self-sufficient, and, the Arabs (“Palestinians”) are comparatively militarily weak and economically poor, the former must constitute alleged “oppressors,” and, the latter must constitute alleged “victims.”

The supremacist and totalitarian Islamic jihadist imperative that lies at the heart of Arabs’ infantile and perpetual belligerence, and, their self-inflicted miseries, along with the Jews’ historical ties to Israel (pre-dating Islam’s founding by millennia) are always ignored by Leftist useful idiots.

The party and the electorate are not the same thing. The more that the cray cray Dem leadership steps out of line, the more the moderates shift to voting R. Now, to clean out the Rinos and things will be good.

That nasty little shrew wants to equate “Islamophobia” with Antisemitism. That must not be allowed.

Hard to believe we are ‘here,’ but here we are.

Imagine if Donald Trump didn’t ride to the rescue?

It is a shame that some people stagnated for the past 1600 years, simply because they are so dull witted that they do not recognize Mohammed for what he was.

Wait another generation. She’s the “camel nose under the tent” Acadamia is pushing Divest Israel majorly. Kids graduate thinking Israel is the demon and Pali’s are victims. I graduated 4 years ago and it had been pushed at me for all of the 3 years I was in school.
P.S. I graduated in 3 not 4. She’s scary!

Dems don’t care. Party of hate, look at the dem party covering for ihlan. And their base hates Jews with a passion so they’re undoubtedly happy as clams.
If I was Jewish I’d have an egress plan to leave this country in case her ilk actually get power in this country. Go somewhere safer like Germany (sarcasm).