“Community vote” tips the balance against BDS, ending in defeat 14-15 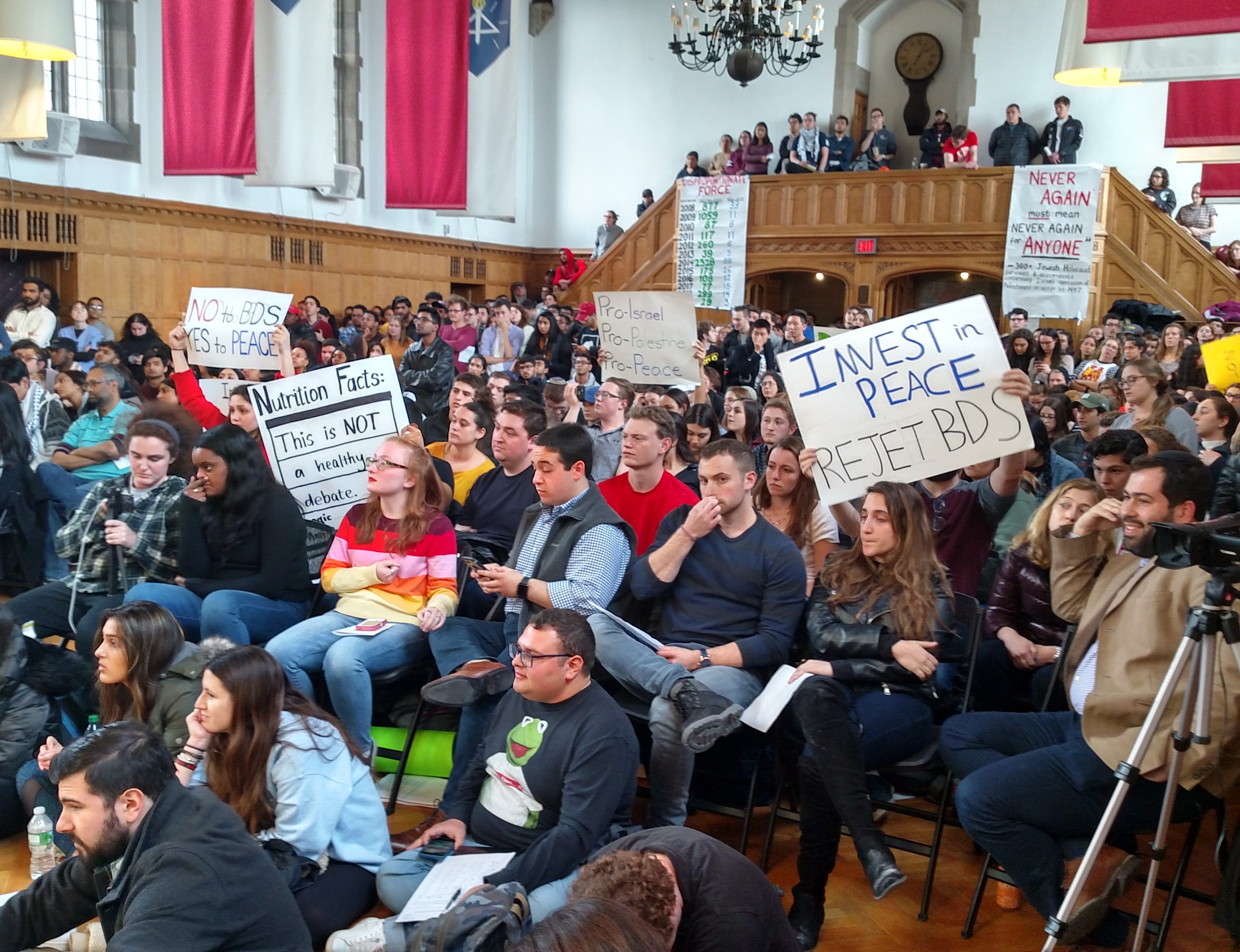 The President of Cornell previously rejected the SJP divestment request. So the vote in front of the Student Assembly would have been merely symbolic.

Nonetheless, symbolism matters, and SJP and its coalition of other student groups used this as an opportunity to spend a month lying about Israel and Zionism, and forcing the campus to address those lies.

BDS was tried in 2014 and failed miserably, but not before SJP tried to intimidate and bully pro-Israel students. This time around there wasn’t physical intimidation, but SJP was more strategic, having spent months planning this maneuver.

The key strategy and tactic used this year, which is from the SJP playbook, was to call for divestment from Israel while at the same time denying that the resolution was part of the Boycott, Divestment and Sanctions (BDS) movement. Call it BDS-lite — the strategists at National SJP and their helpers know that BDS is toxic, so they do BDS without calling it BDS.

It almost worked. The Student Assembly rejected the resolution by just one vote 14-15, and only after two “community” votes from the undergraduate students in the audience went for “No” on the resolution. The pro-Israel community, which is most of Cornell, turned out in force and the community made its voice heard in a decisive way.

That was a just outcome. BDS has very little support outside the far-left student and faculty activists on campus. But they can exert disproportionate influence over institutions like the Student Assembly. The community vote helped level the playing field, which is why SJP tried at the meeting to change the nature of its resolution to eliminate the community vote. That last minute maneuver failed, and the community got a voice.

The SJP strategy also had a putrid racial overtone, with SJP repeatedly emphasizing that all of the non-white student identity groups endorsed the resolution. The resolution thus was presented as students of color backing ‘Palestine” against the white Jews supporting Israel. This is the toxic byproduct of how intersectionality theory dominates on campuses, with Jews and Israel being the center of the supposed intersecting systems of oppression.

SJP also put a small number of anti-Israel Jewish students out front in its campaign to deflect claims that BDS is antisemitic. We see this all the time with groups like Jewish Voice for Peace which “Jew-washes” antisemitism.

It didn’t work, but only by one vote.

Here are some photos: 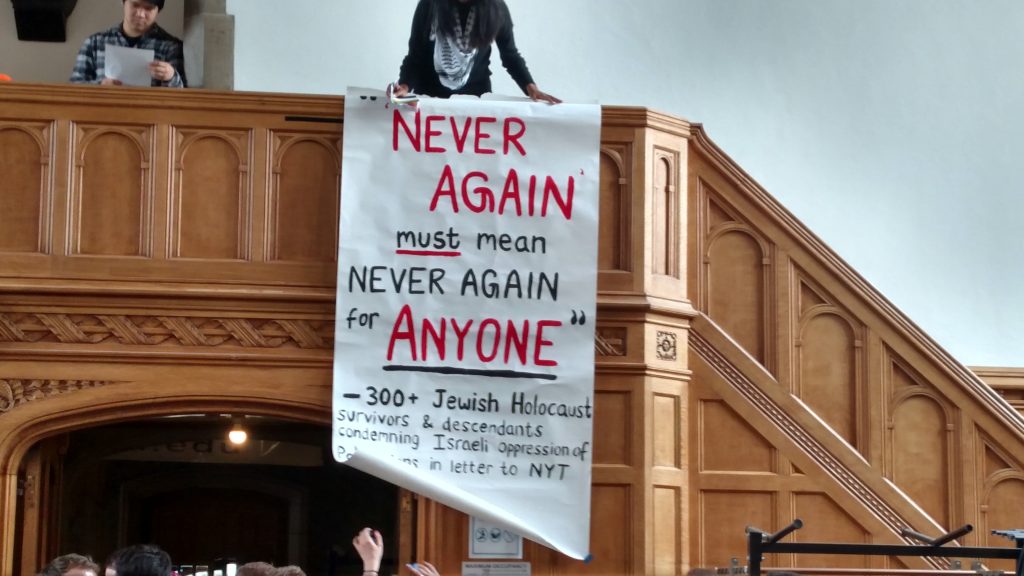 The usual defamatory claims of Apartheid: 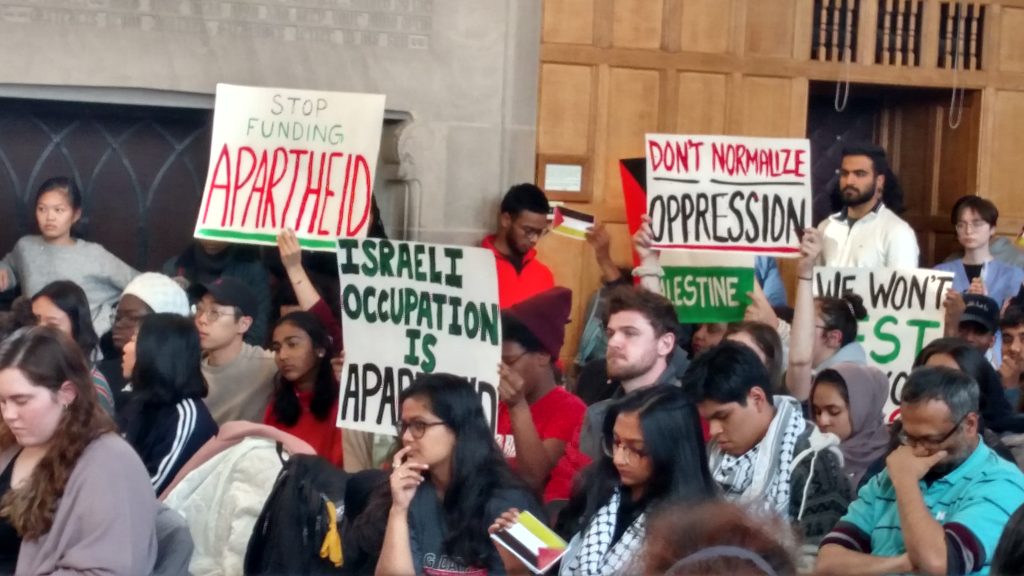 The list of groups supporting the divestment resolution unfurled by SJP: 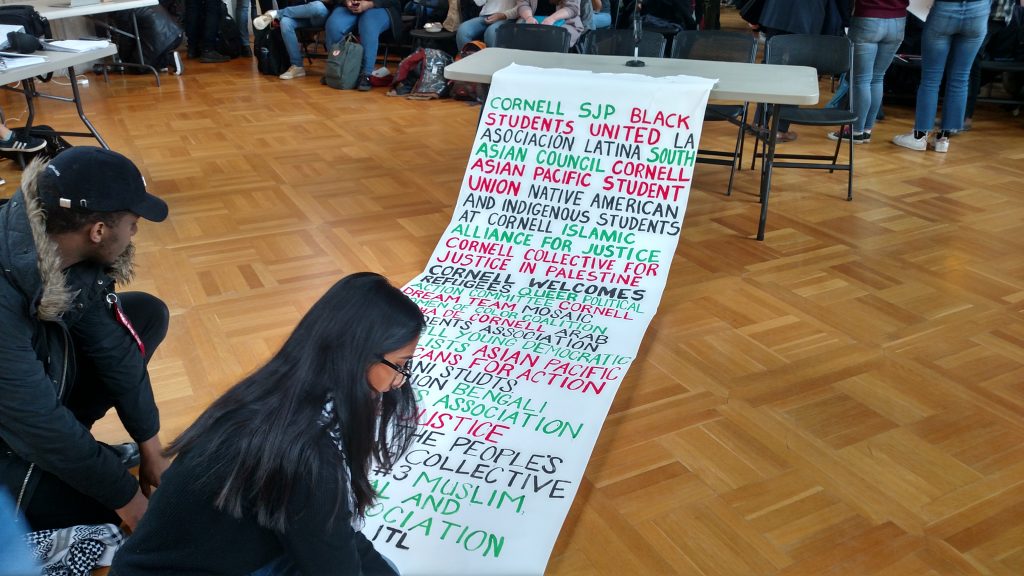 Some pro-Israel signs and students: 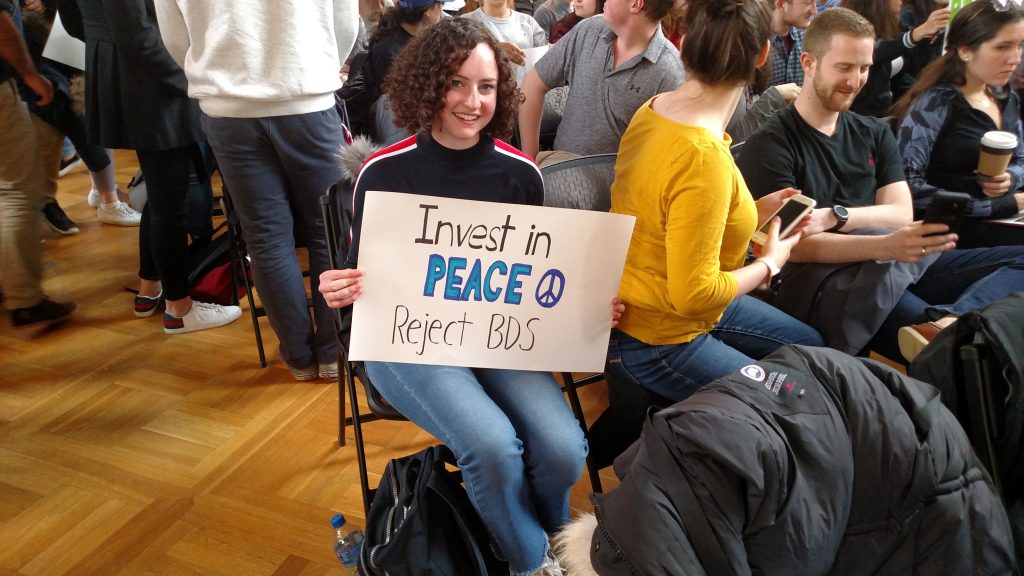 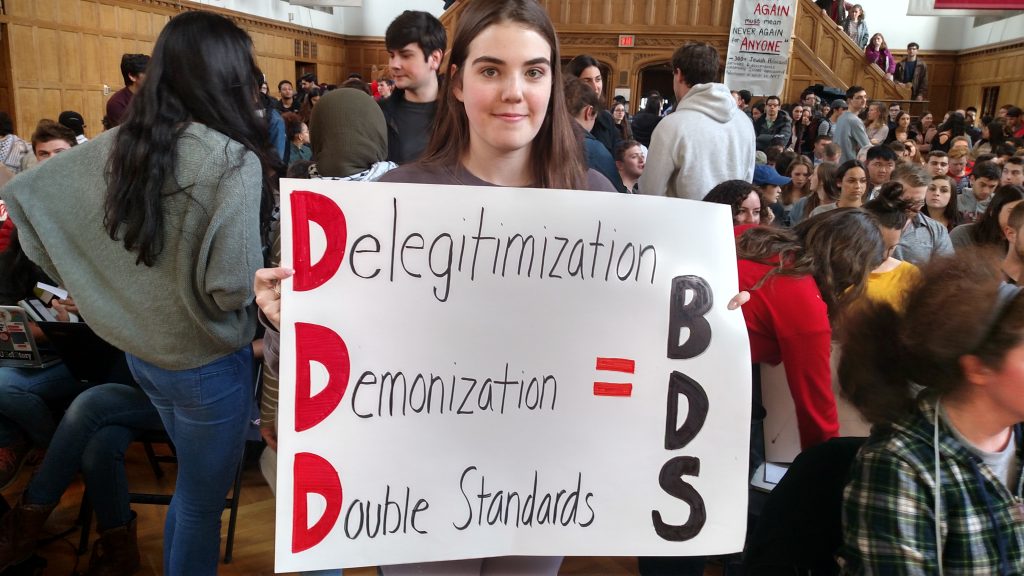 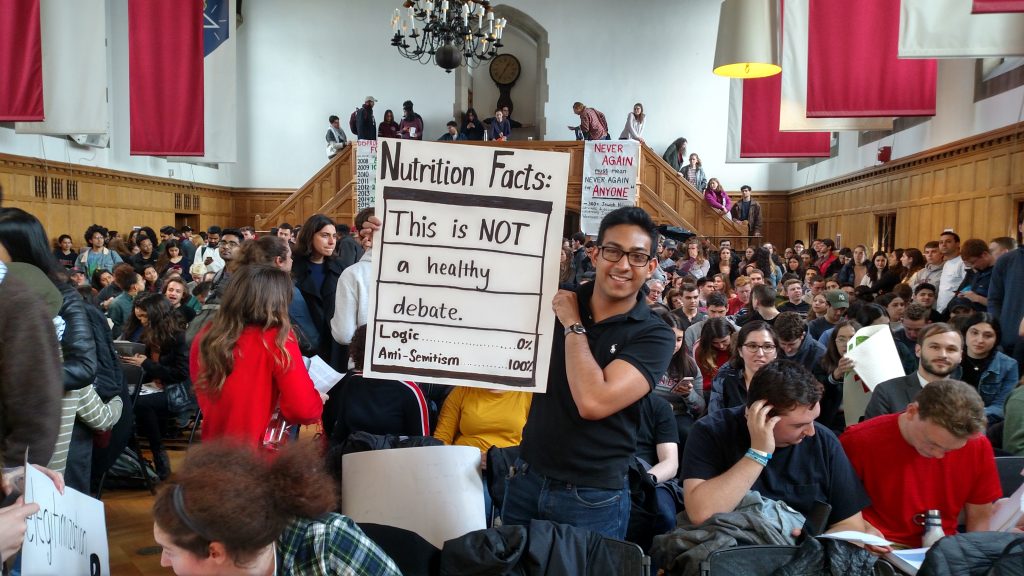 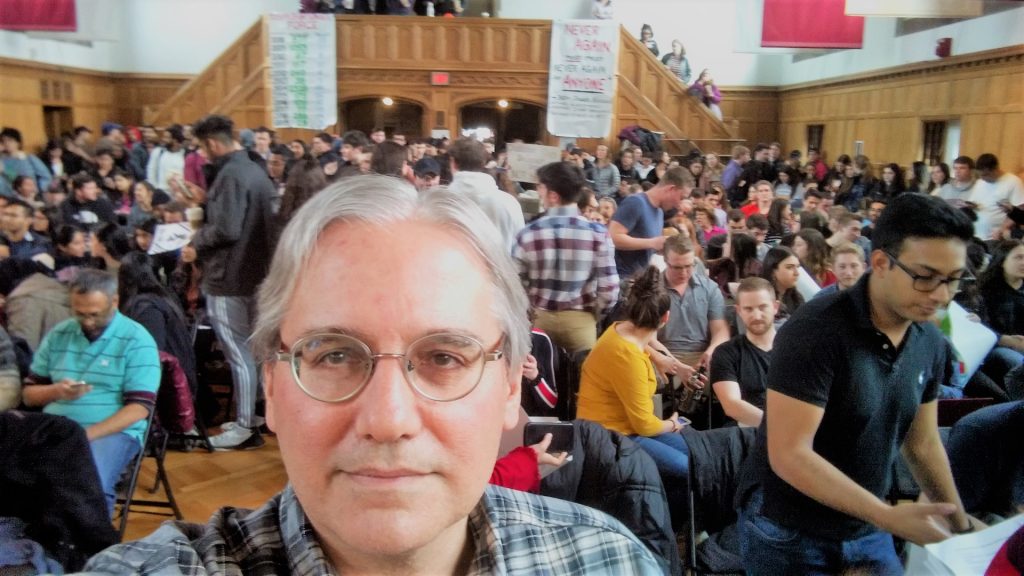 Looks like at least one Cornell student needs to invest in a dictionary.

I am glad it was defeated, disappointed that it was such a small margin.

There should be some way to eject such people from all things Jewish. Preferably, send them to Sudan, Indonesia or an ISIS camp, but with hidden sound recordings so we can hear their offers to be agents of sabotage, or the moment when they volunteer to be suicide bombers.

All it takes to defeat BDS is exposure, tireless exposure of their agenda. Their goals conflict with the American ideas of liberty and justice for all.

Most of the student body, including Jews, is probably focusing on other things especially classes. Meanwhile there’s a core of anti-Israel people who have a multi-year plan to keep running votes like this until they slip one through.

The power of buzz words; ‘secret ballot’ = good, therefore, secret ballot always good. It’s a good thing they’re in school; they have much to learn.

Funny – today’s campus is so monotheistic and intolerant it makes even the smallest signs of progress towards logic and free speech seem monumental.

The fact that this is viewed as a victory shows how bad things are.

Are there votes being held to divest from companies doing business in the many countries whose regimes truly oppress various minority groups?

I can think of only one answer.