The REAL history of the BDS movement

The REAL history of the BDS movement

Anti-Jewish boycotts of 1920s-1930s and Arab League repackaged as “social justice” to appeal to Western liberals. 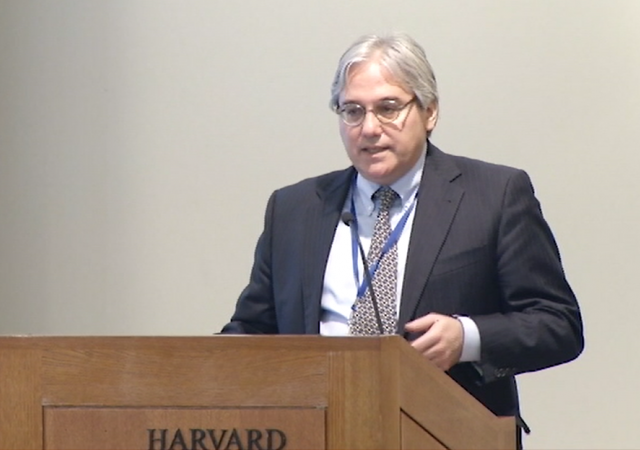 On December 4, 2016, I was a speaker at a national conference sponsored by the Committee for Accuracy in Middle East Reporting in America (CAMERA), held at Harvard Law School. The conference was co-hosted by HLS Alliance for Israel, and was titled “War By Other Means – BDS, Israel and the Campus.”

My presentation was on the history of the Boycott, Divestment and Sanctions (BDS) movement.

While I have written hundreds of posts about the BDS movement, including its history, this presentation gave me an opportunity to pull it all together in one place, and to do more research to obtain documentation.

BDS is a direct and provable continuation of the Arab anti-Jewish boycotts in the 1920s and 1930s and subsequent Arab League Boycott, restructured through non-governmental entities to evade U.S. anti-boycott legislation and repackaged in the language of “social justice” to appeal to Western liberals.

I’ll now walk you through a shortened version of my presentation.

A video of my full presentation (40 minutes) plus Q&A (20 minutes) and my full slide show (pdf. here) are embedded at the bottom of this post.

Thesis: The BDS movement is the end product of a continuum of anti-Jewish boycotts starting in the 1920s, as demonstrated by the history of the boycotts and the words of the participants. 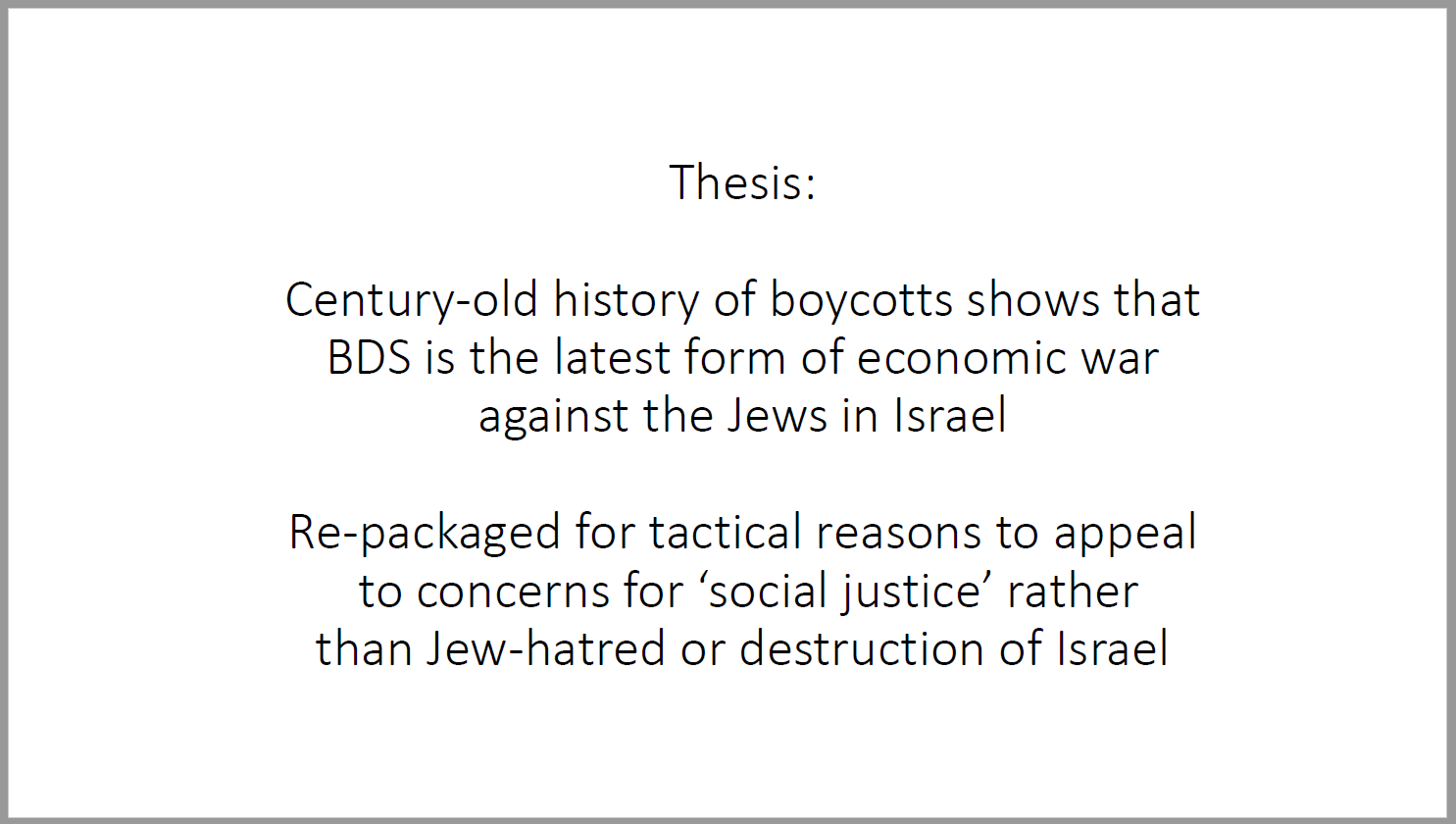 A central focus of my presentation was debunking the myth, repeated endlessly by BDS activists, that BDS was launched in a 2005 as a call from Palestinian civil society: 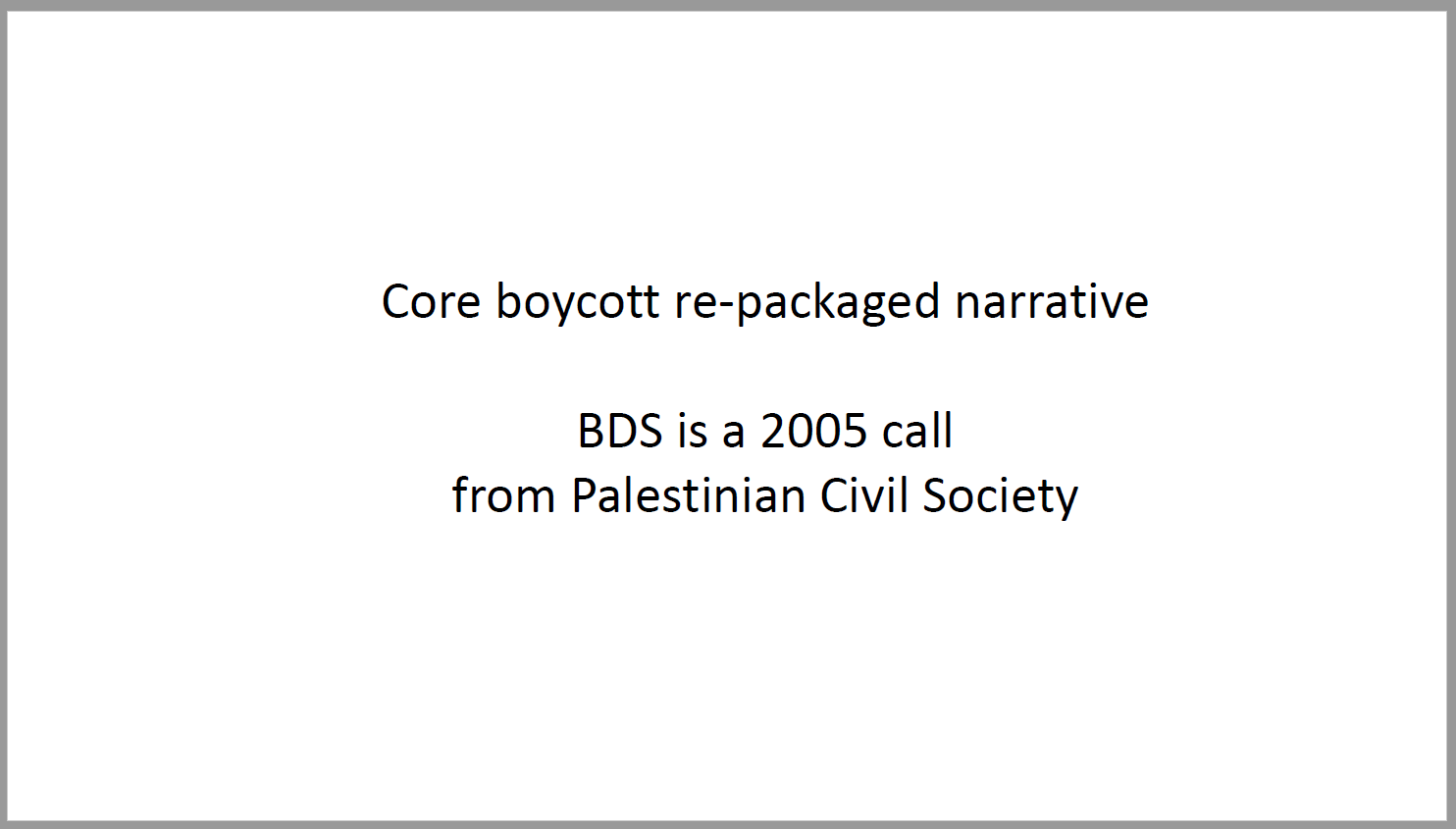 This supposed launch by Palestinian civil society goes to the very essence of the “social justice” narrative, and is the justification given by BDS leaders, particularly in academia, as to why they single out Israel even though there are other countries in the region and around the world where human rights and nationalistic abuses are far worse.

This December 15, 2013, statement by the then President of the American Studies Association, Curtis Marez, demonstrates how the civil society narrative is used: 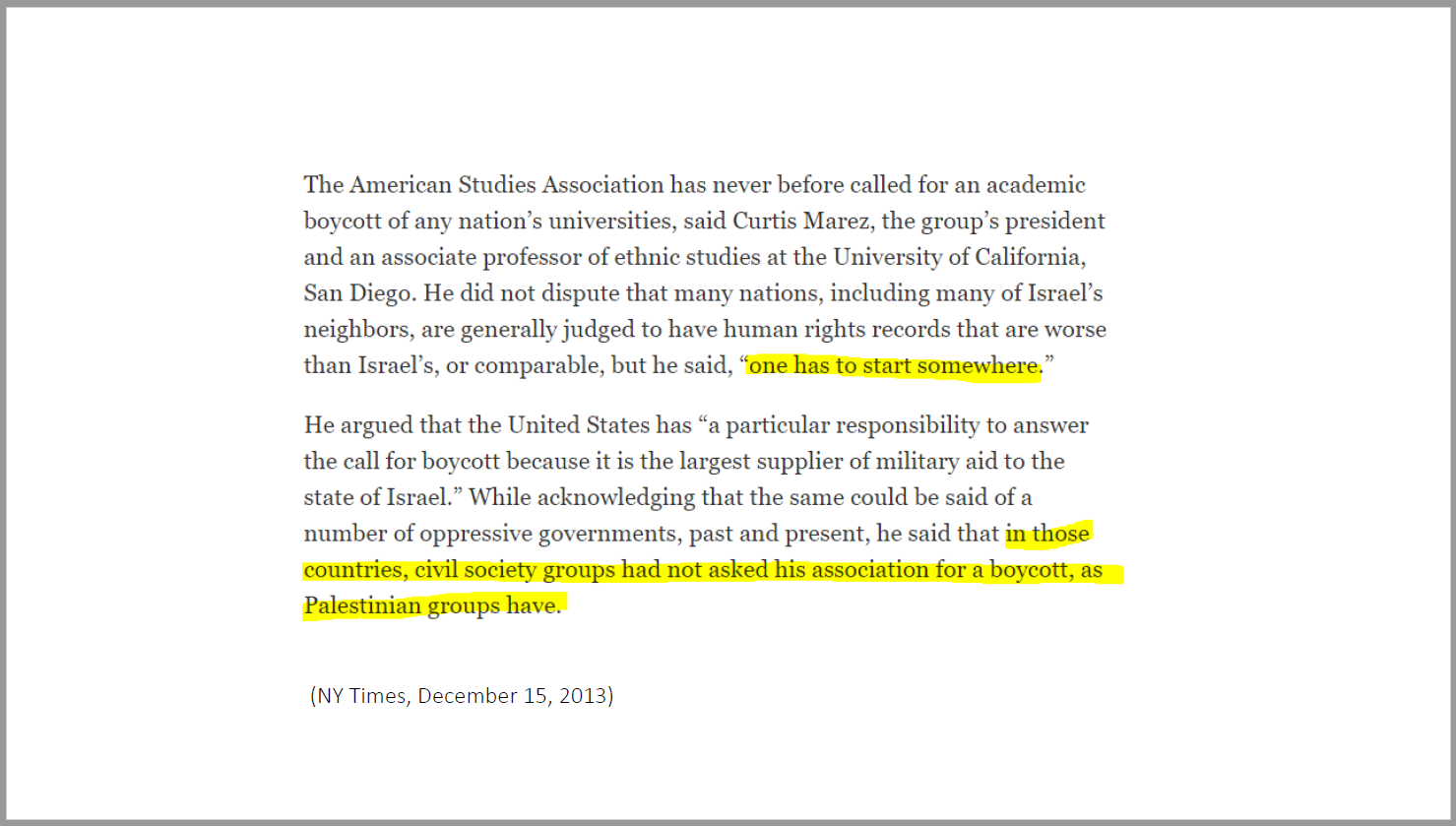 I then walked through the history of boycotts of Jews to demonstrate the history, starting in the 1920s-1930s. 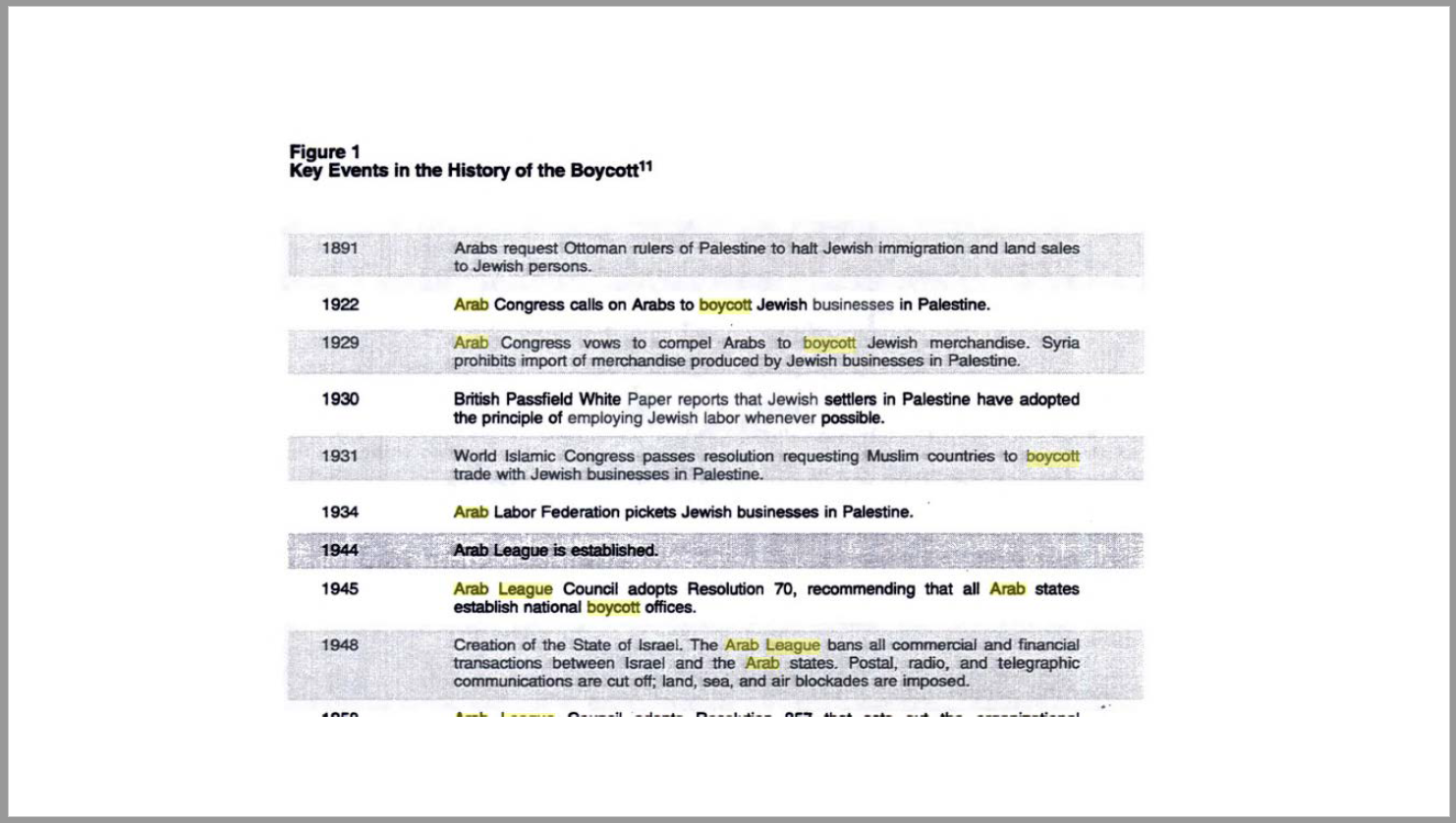 Including specific examples, all of which were framed as anti-Jewish boycotts. (h/t Elder of Ziyon blog for these images.) 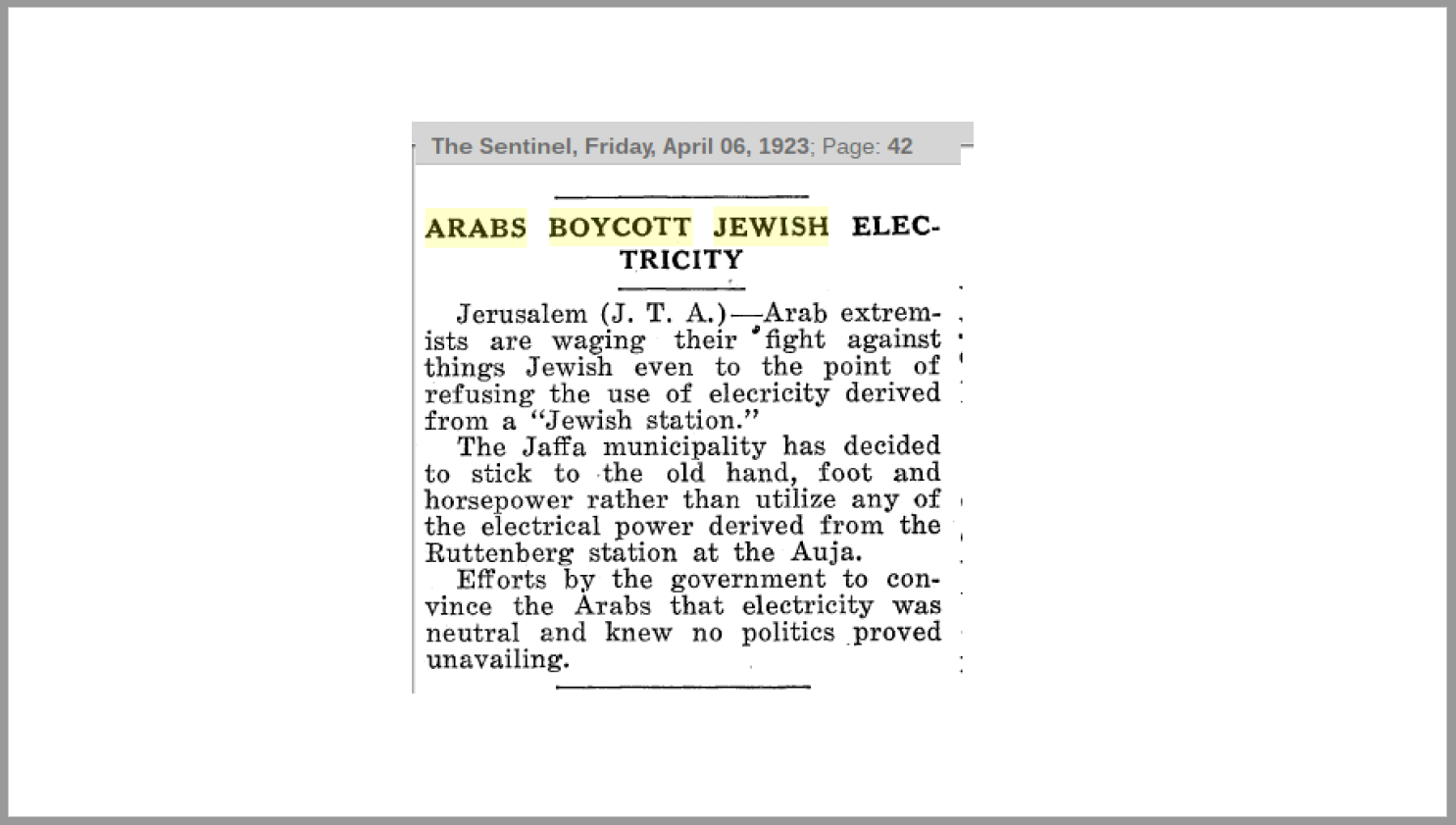 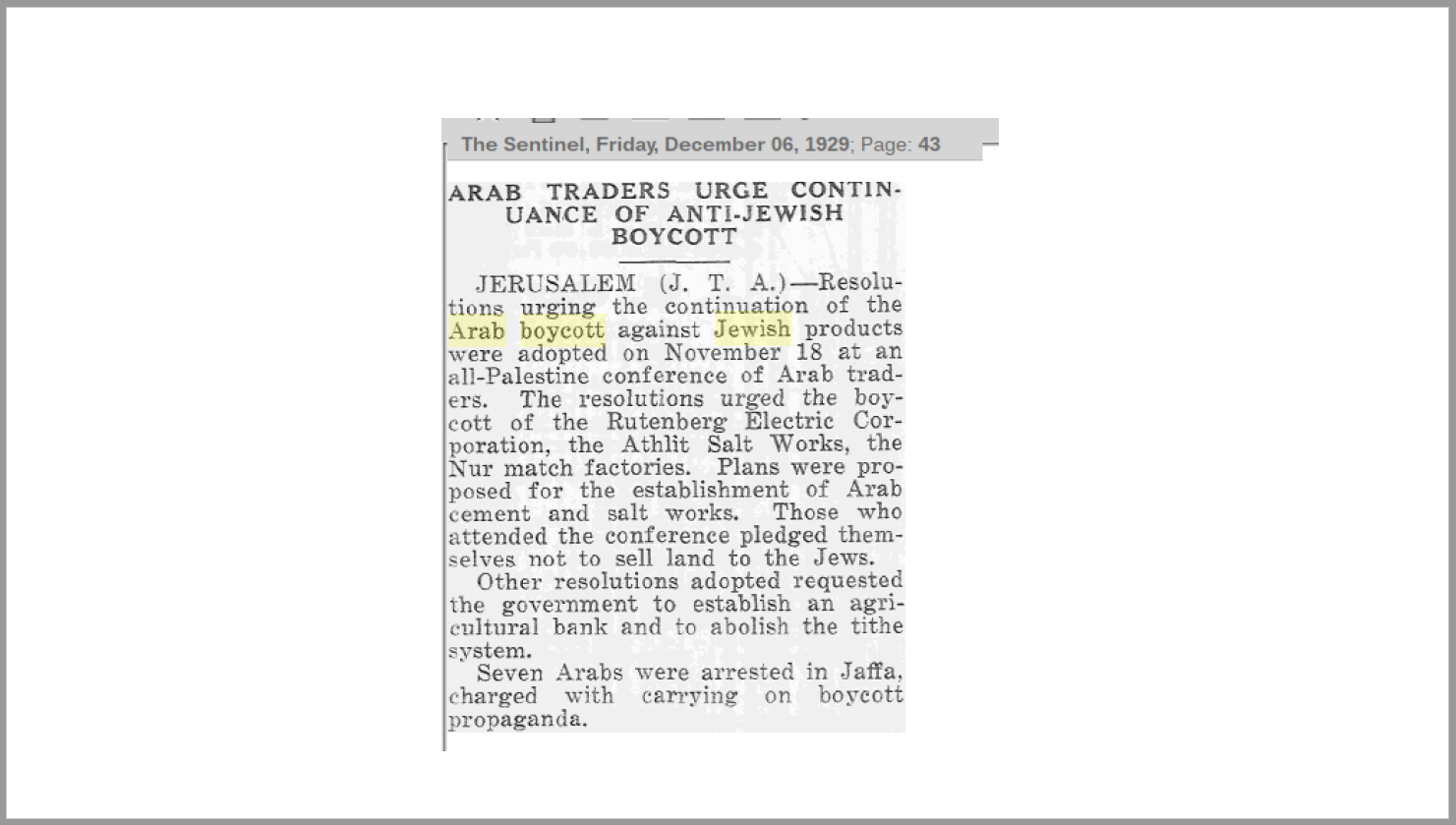 I then showed how the Arab League boycott, started in 1945 before Israel even was a nation, was an anti-Jewish boycott by its own terms.

Note how Jews are referred to by the NY Times as Palestinians. (h/t Israelly Cool for image) 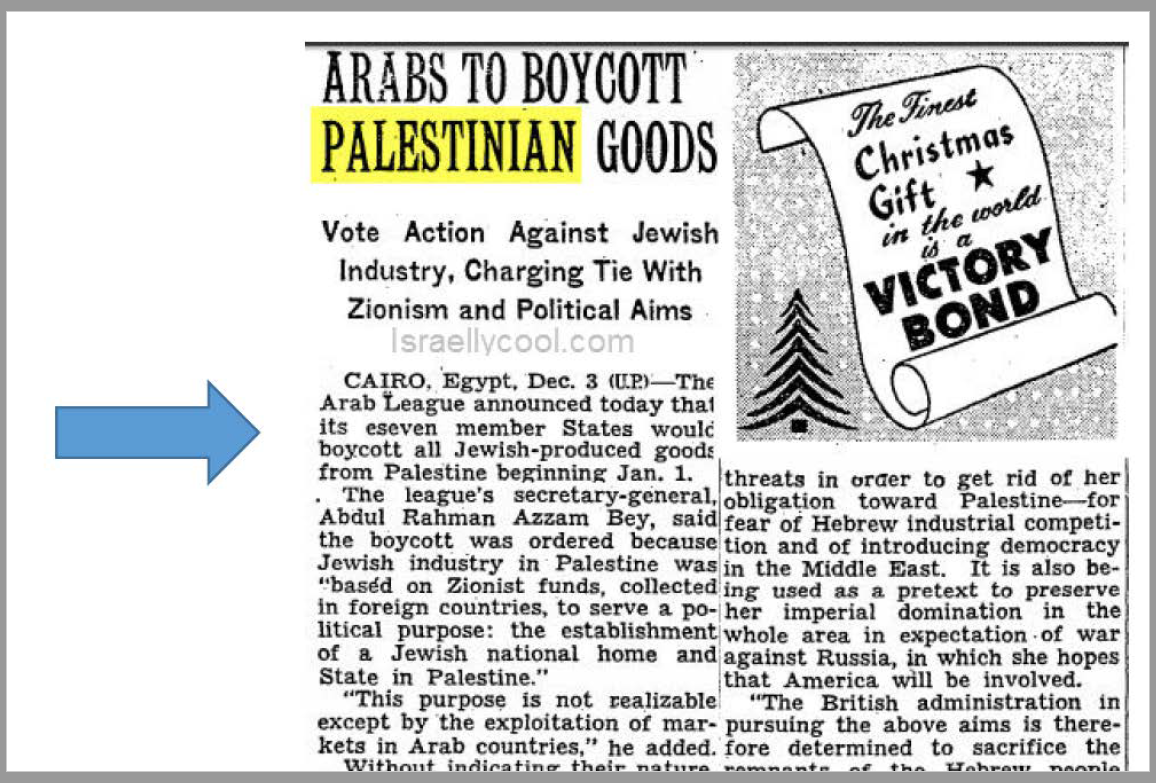 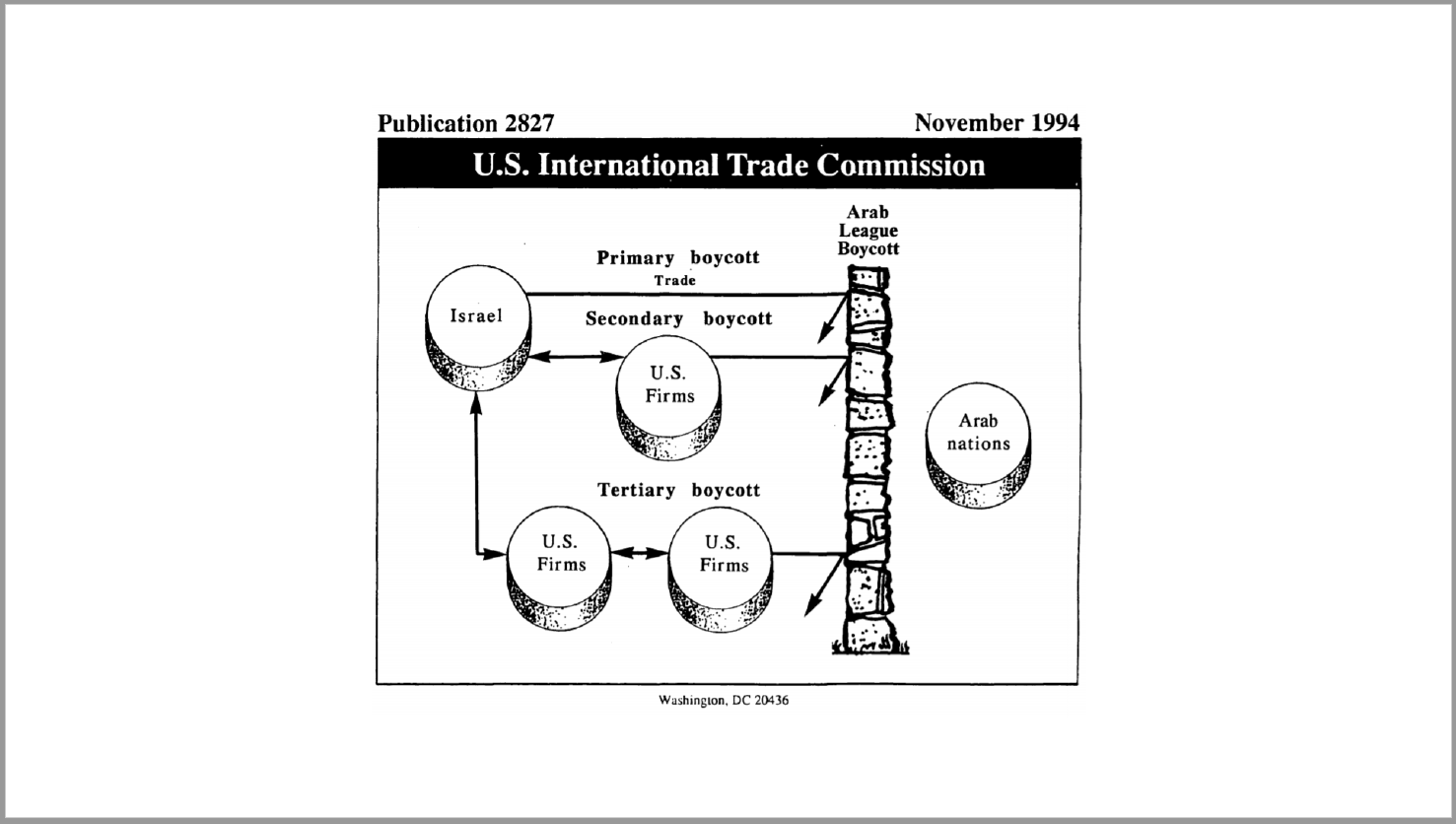 That the Arab League Boycott was anti-Jewish, and not anti-occupation, was further demonstrated the lack of a boycott against Jordan and Egypt despite their occupation of Judea and Samaria (the West Bank) and Gaza.

The Arab League boycott had nothing to do with creating a Palestinian state, but with destroying the only Jewish state. 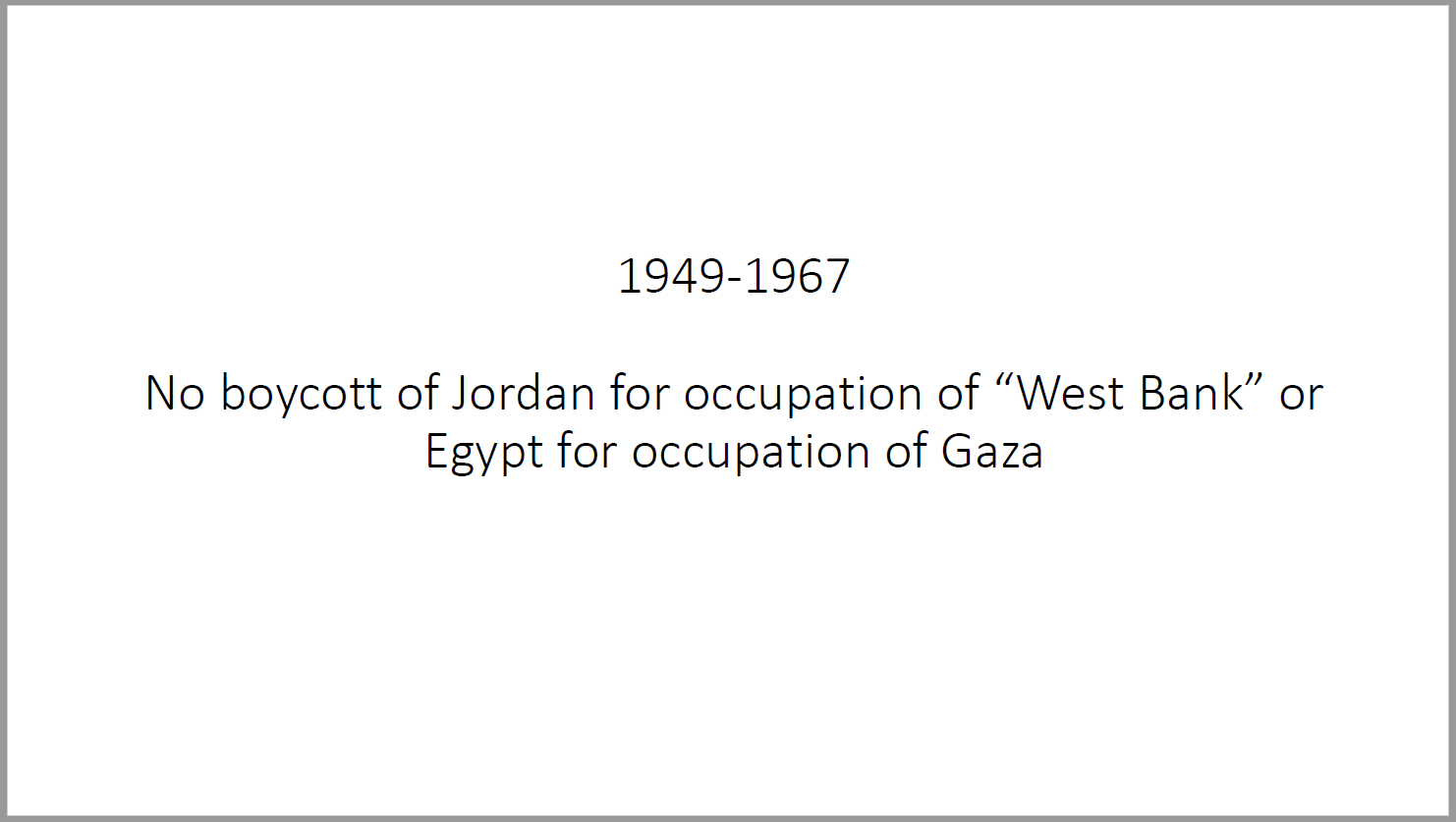 After some boycott successes after the 1973 Arab Oil Embargo, the Arab League Boycott had all but become defunct by the late 1990s, through a combination of factors, including peace treaties and Israeli technological advances. 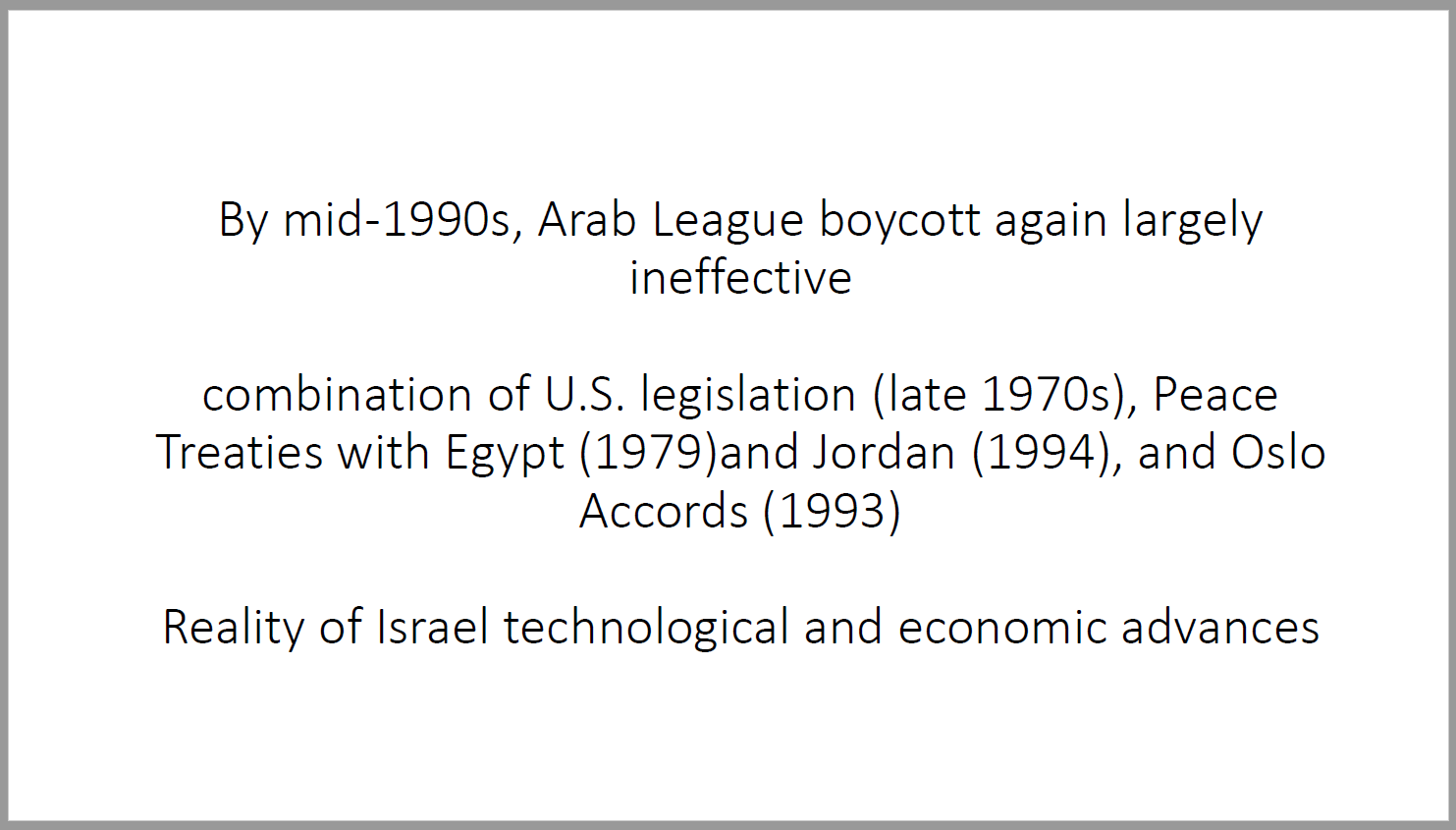 Yet the Arab League desire to boycott Israel as a coercive tool was very much alive by year 2001. 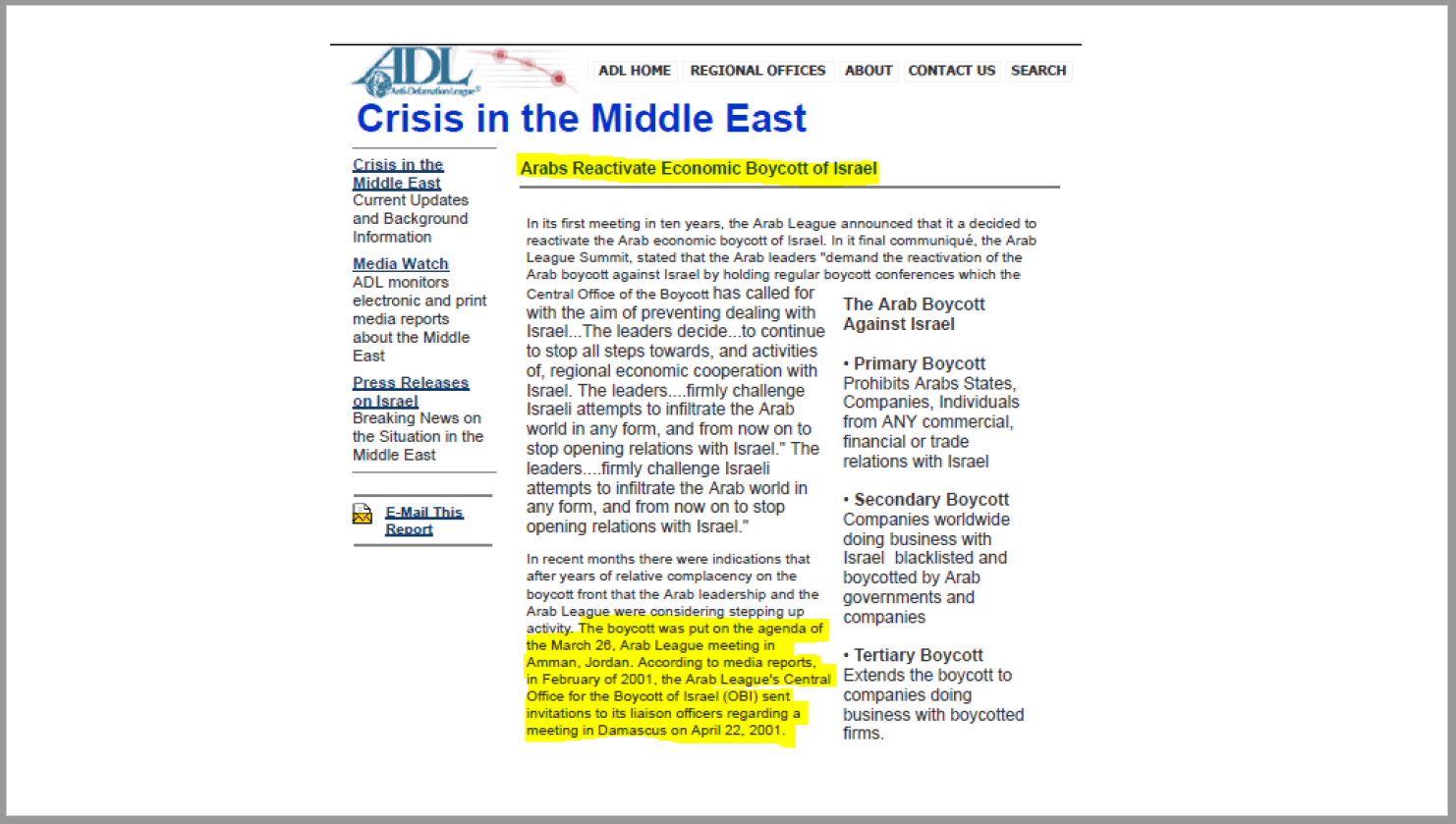 So the rejectionist Arab and Muslim governments, who did not accept Israel’s right to exist, restructured the boycott as a non-governmental civil society boycott, initiated by captive NGOs (see the video for a full explanation) through the U.N. Durban process. 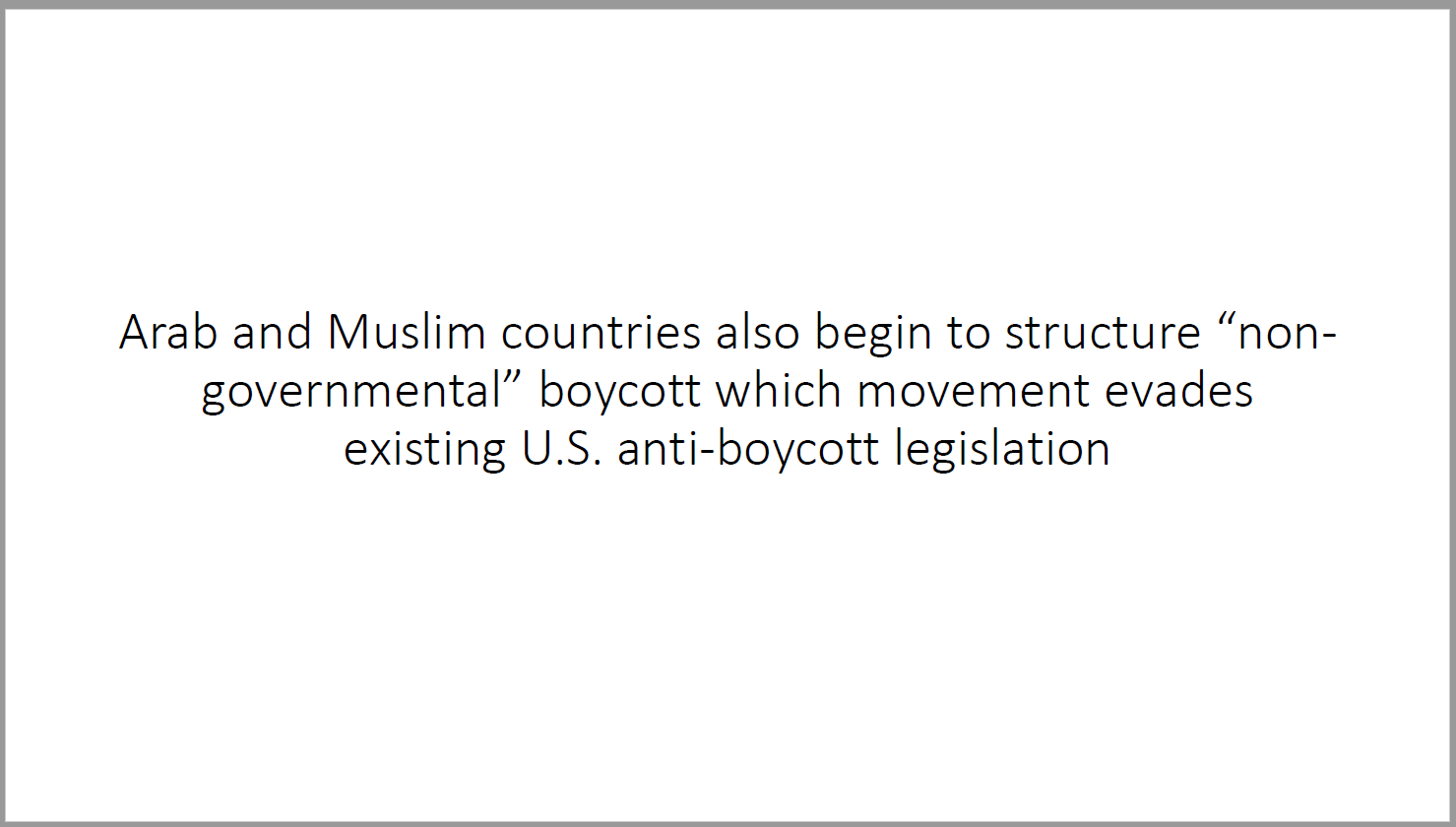 The Durban Boycott Strategy was launched in Tehran in Ferbruary 2001, and repackaged the struggle by portraying Israel as an Apartheid state as to which a boycott system similar to that employed against South Africa was needed.

This text from an article written for The Daily Beast by former U.N. High Commissioner for Human Rights Mary Robinson describes the anti-Israel atmosphere at the Tehran Conference, and how the expectation was that the Apartheid language would be removed later, but it never was. 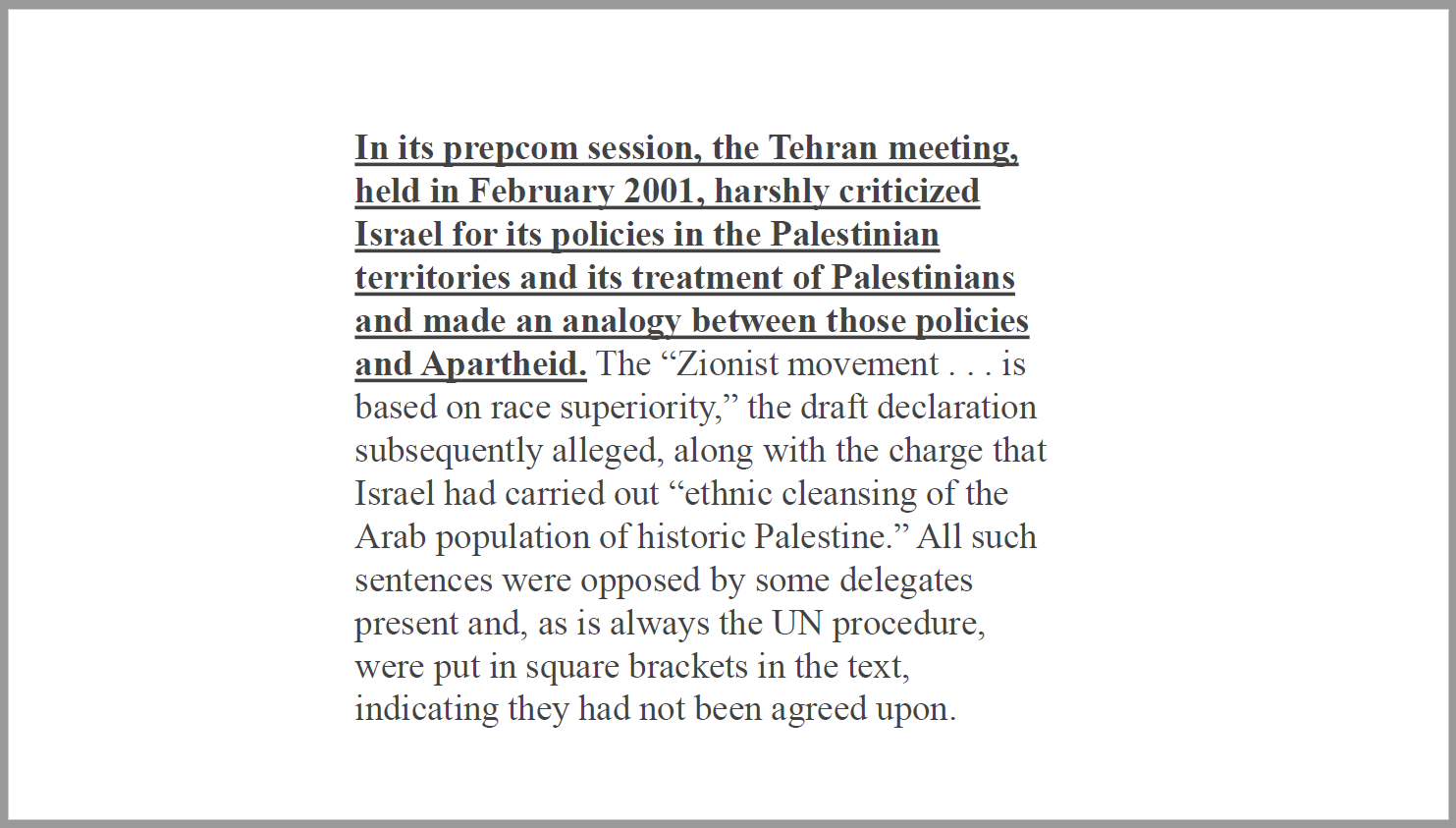 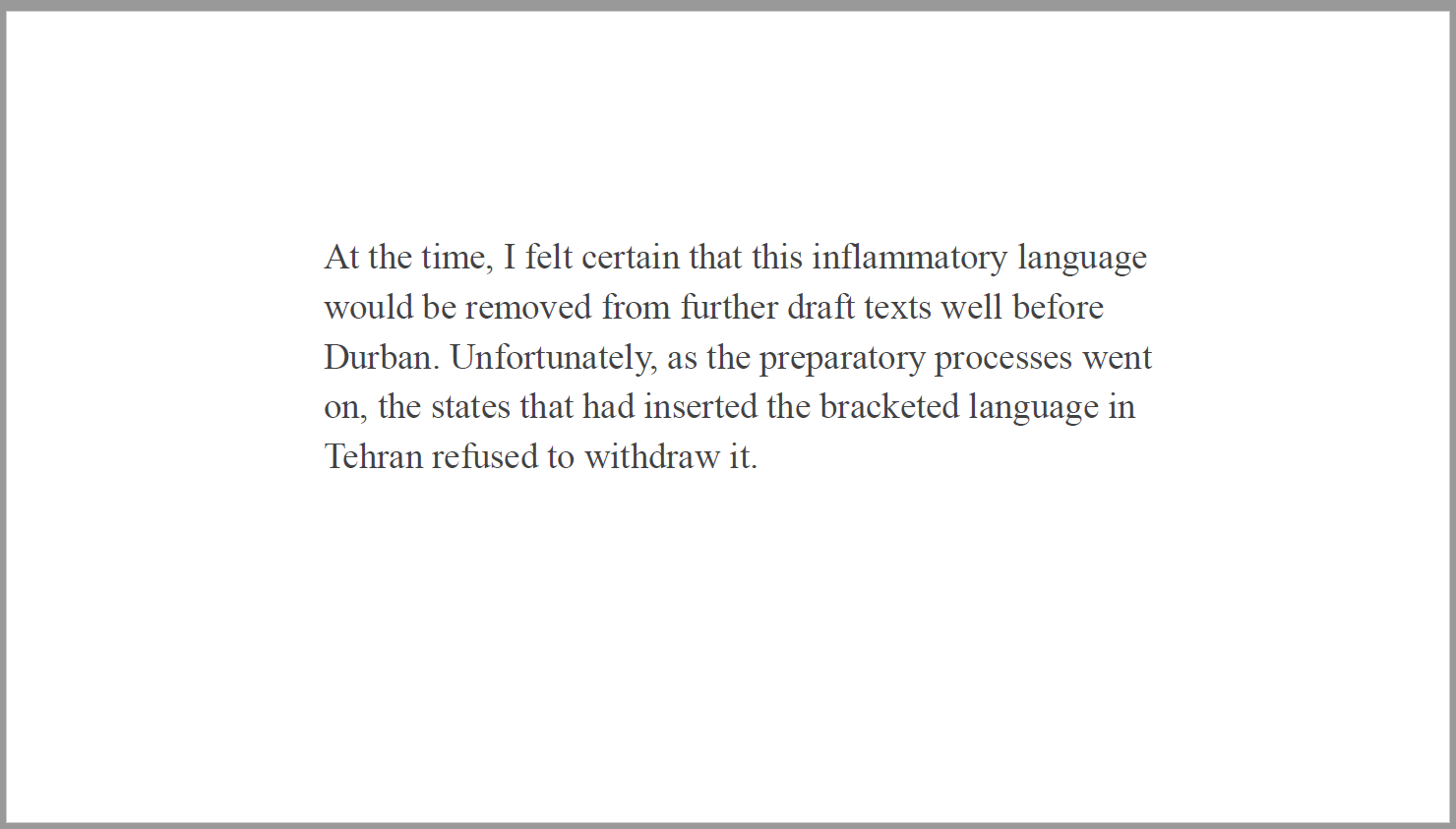 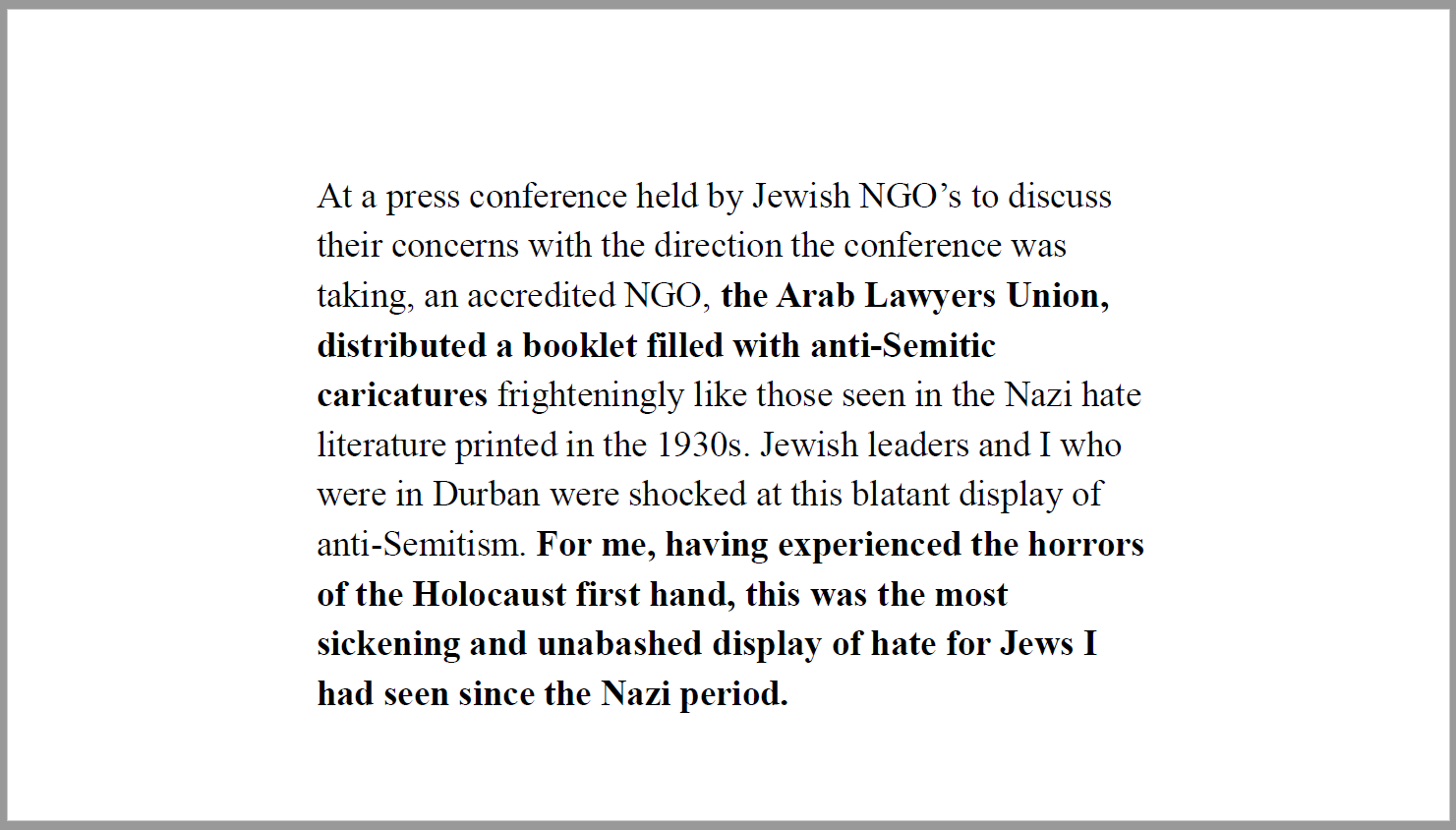 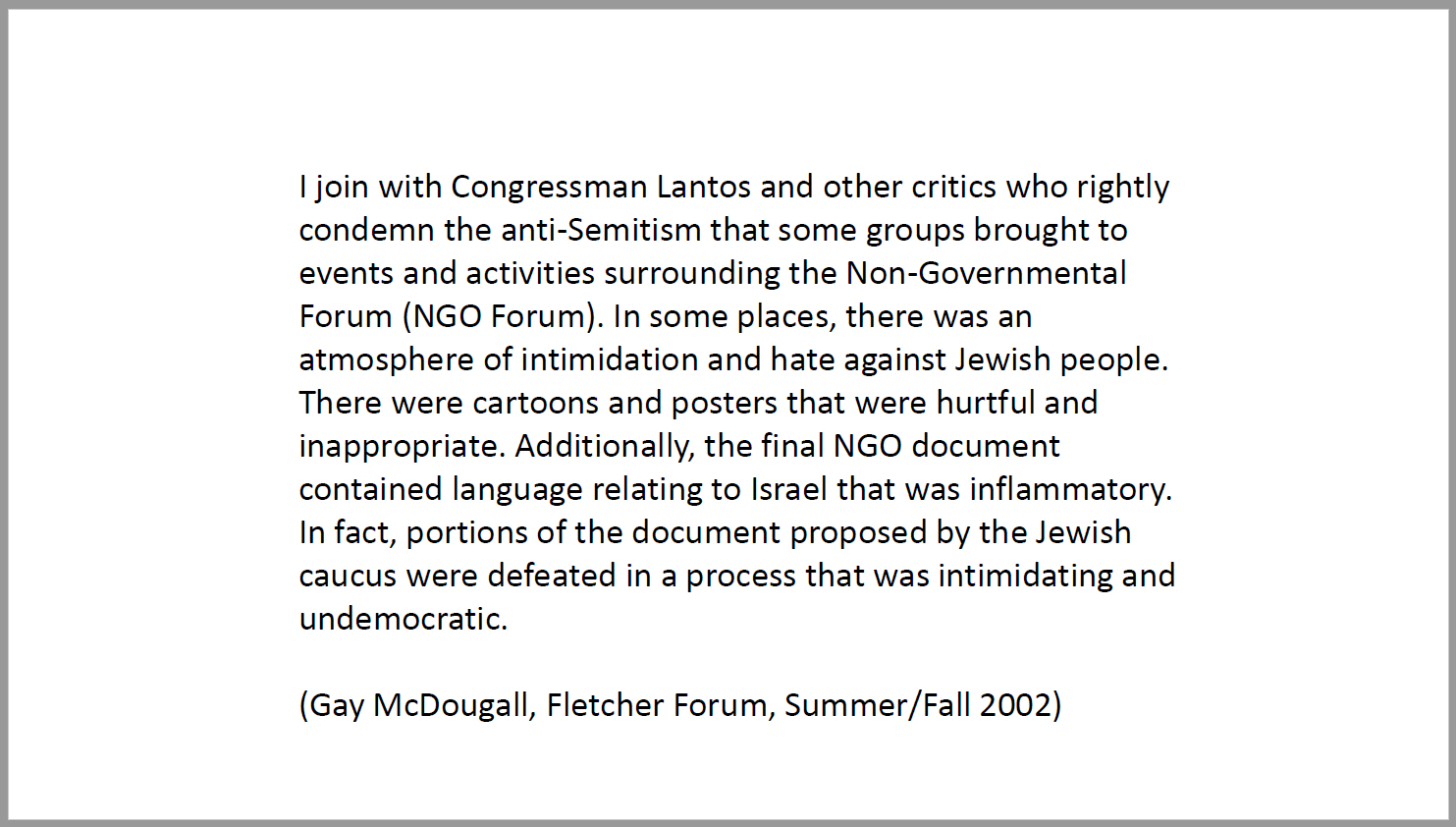 This openly antisemitic forum resulted in what constitutes the BDS boycott call: 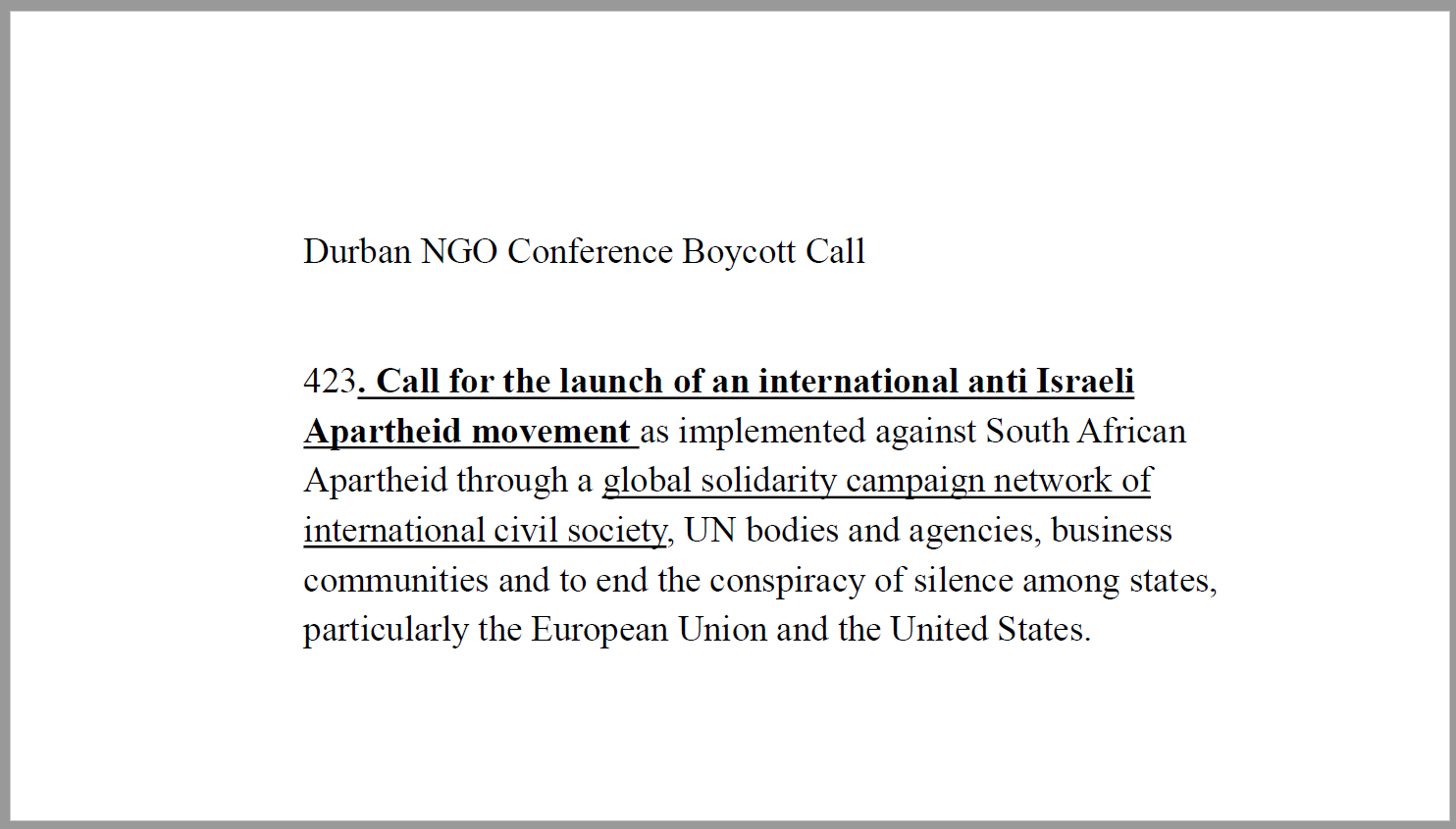 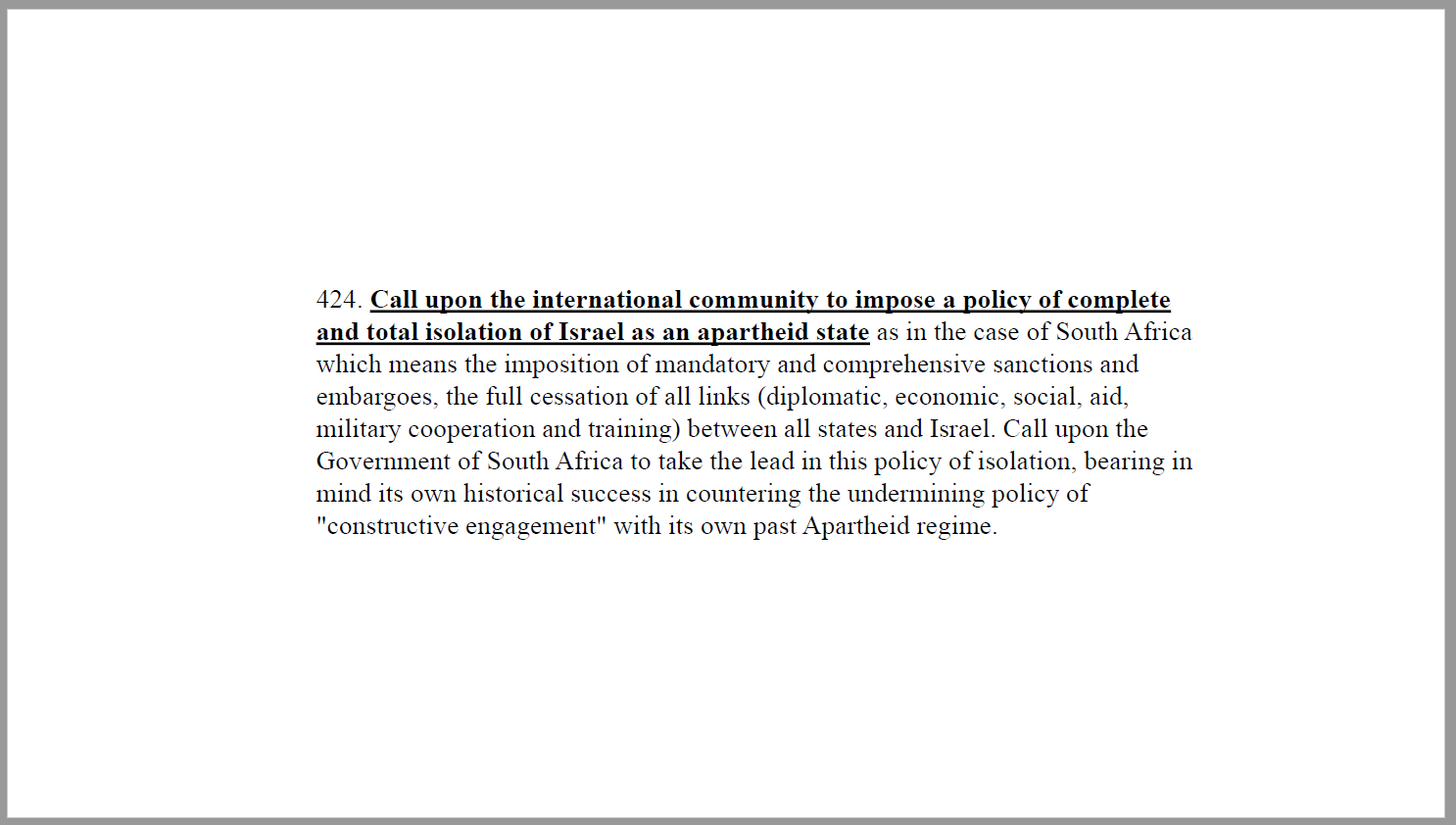 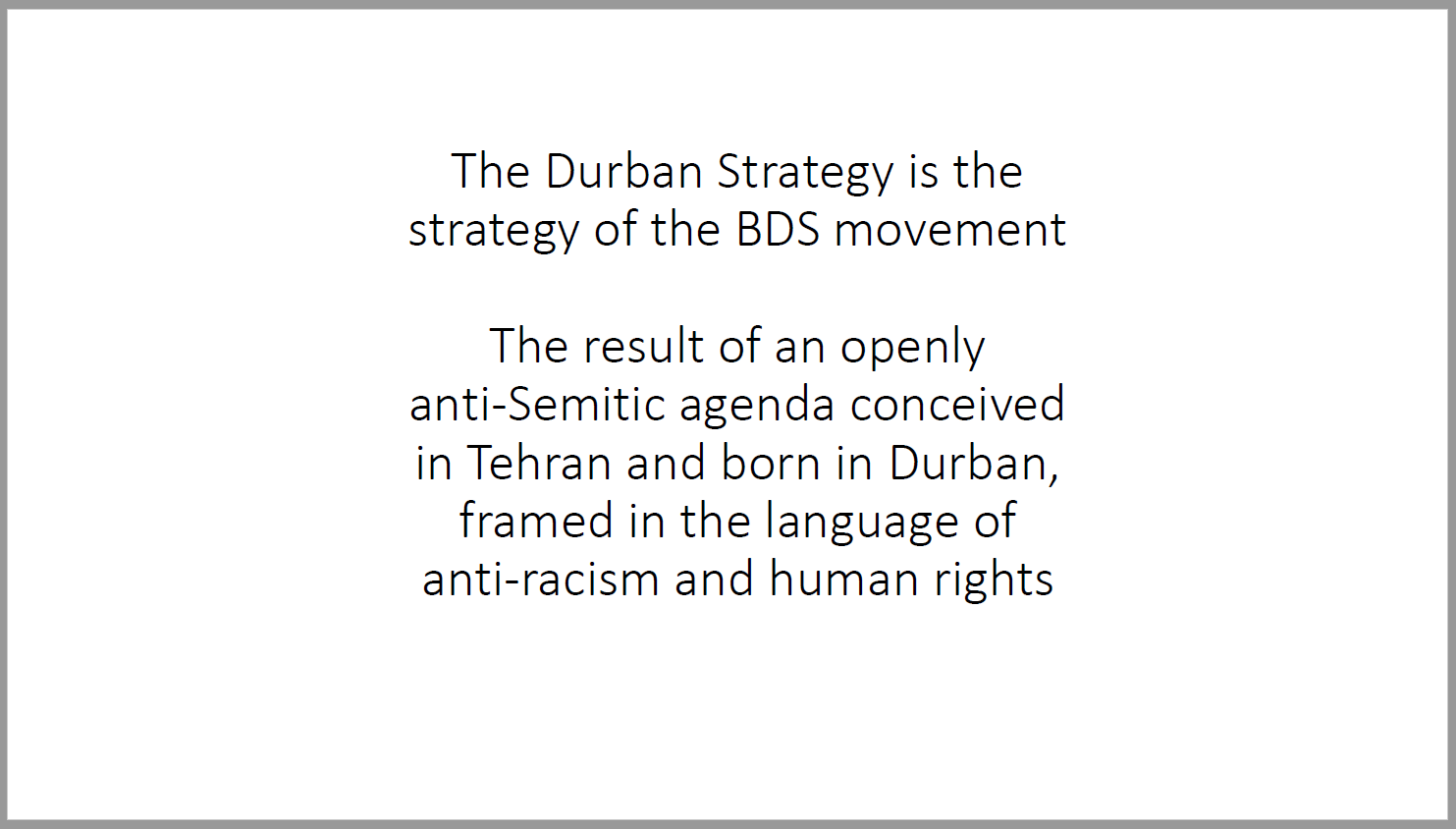 But don’t take my word for the fact that the Durban Boycott Strategy is the BDS strategy that formed the core of the 2005 “civil society” boycott call. Noura Erakat, a well-known Palestinian-American lawyer and activist acknowledges that BDS started at Durban: 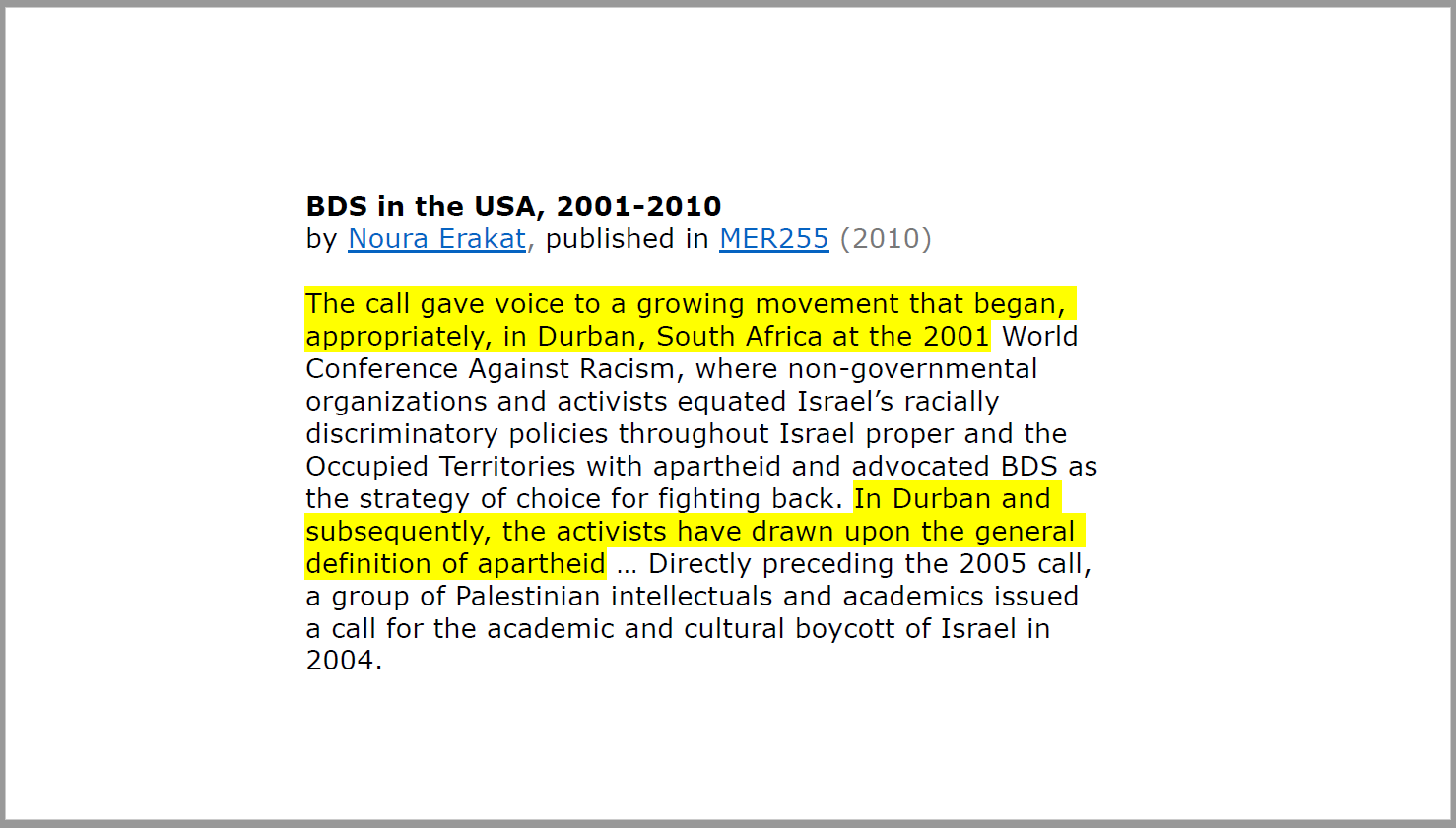 I then demonstrated how the boycott activity did not wait for Palestinian civil society to issue a boycott call.

By the end of 2002, activity (which I detail in the full presentation and video) was so great that Sen. John Cornyn introduced a Senate Resolution condemning this new form of the boycott. 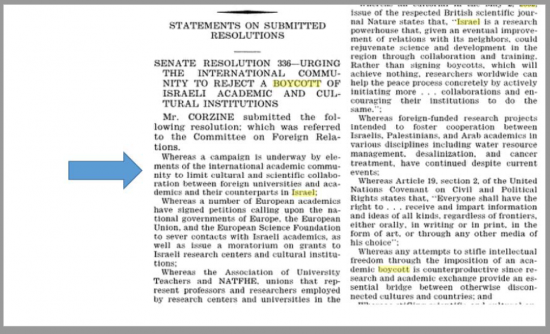 So the notion that boycott activity, particularly academic boycotts, are a response to the 2005 call from Palestinian Civil Society — the claim advanced by the President of the American Studies Association — is historically inaccurate and a false narrative.

The July 2005 Final Boycott Call was an after-the fact declaration. The Durban Boycott Strategy already was being implemented. “Civil society” boycotts, in themselves, was a tactic called for in the Durban resolution cited above. 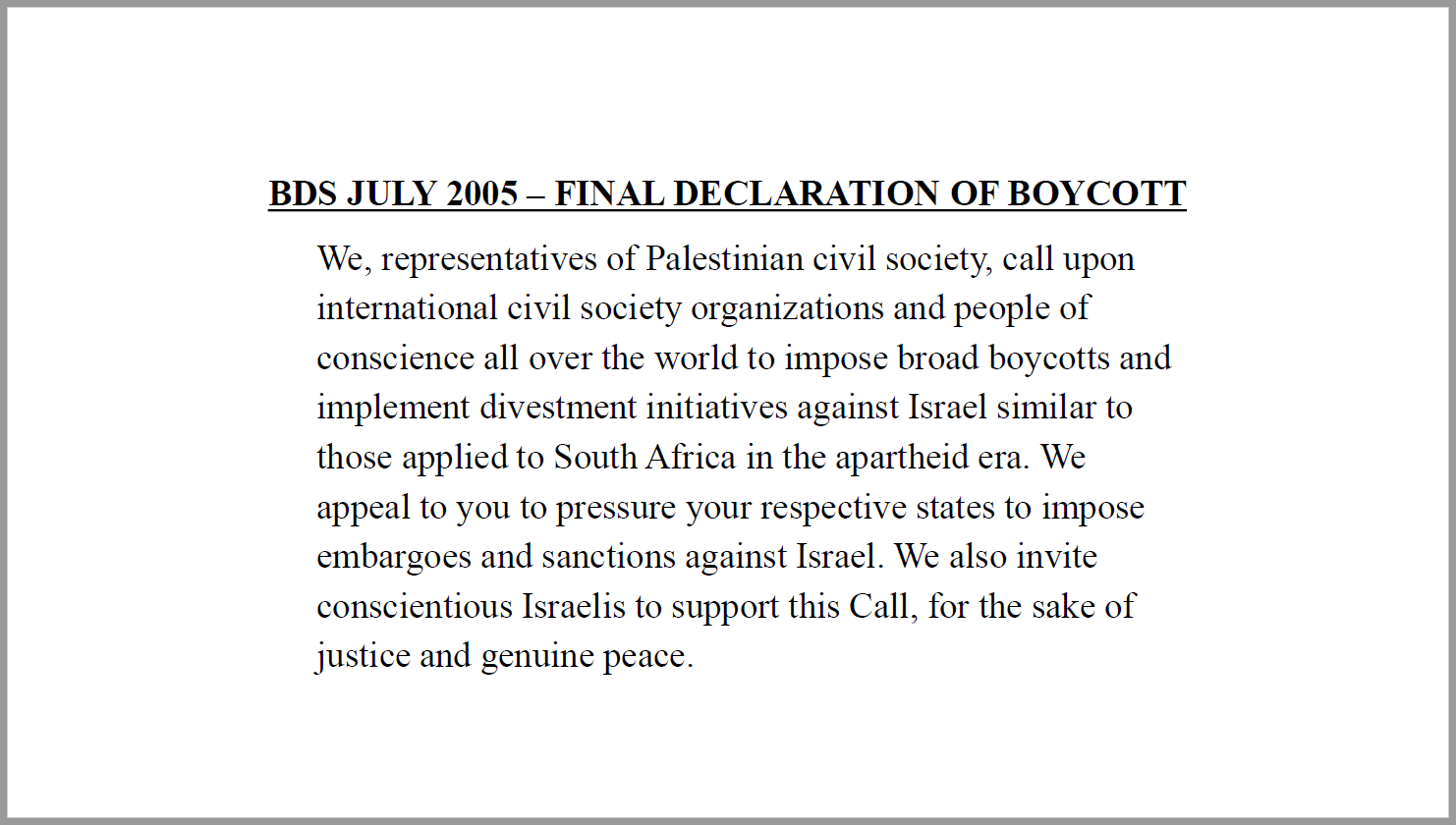 Rather, this new form of boycott was just a continuation of the anti-Jewish boycotts dating back to the 1920s and later implemented through the Arab League.

But don’t take my word for it. At the first official BDS conference in November 2007 in Ramallah, the keynote speaker said that BDS was a boycott tactic similar to the boycotts in the 1920s, which we know were anti-Jewish. 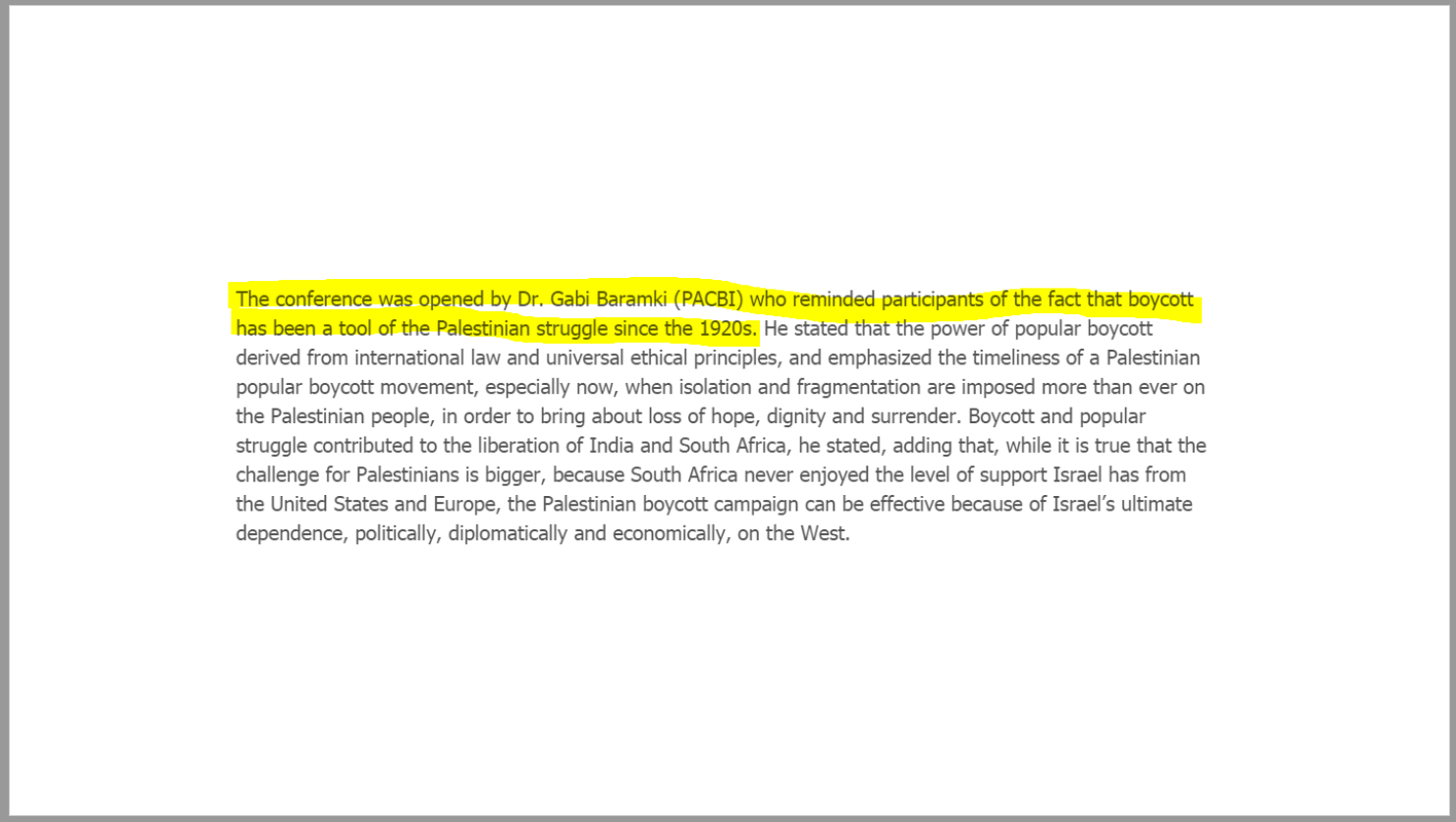 I then examined how the tactics of the BDS boycott reflect the primary, secondary and tertiary structure of the Arab League boycott, but carried out by non-governmental actors to evade U.S. anti-boycott legislation. 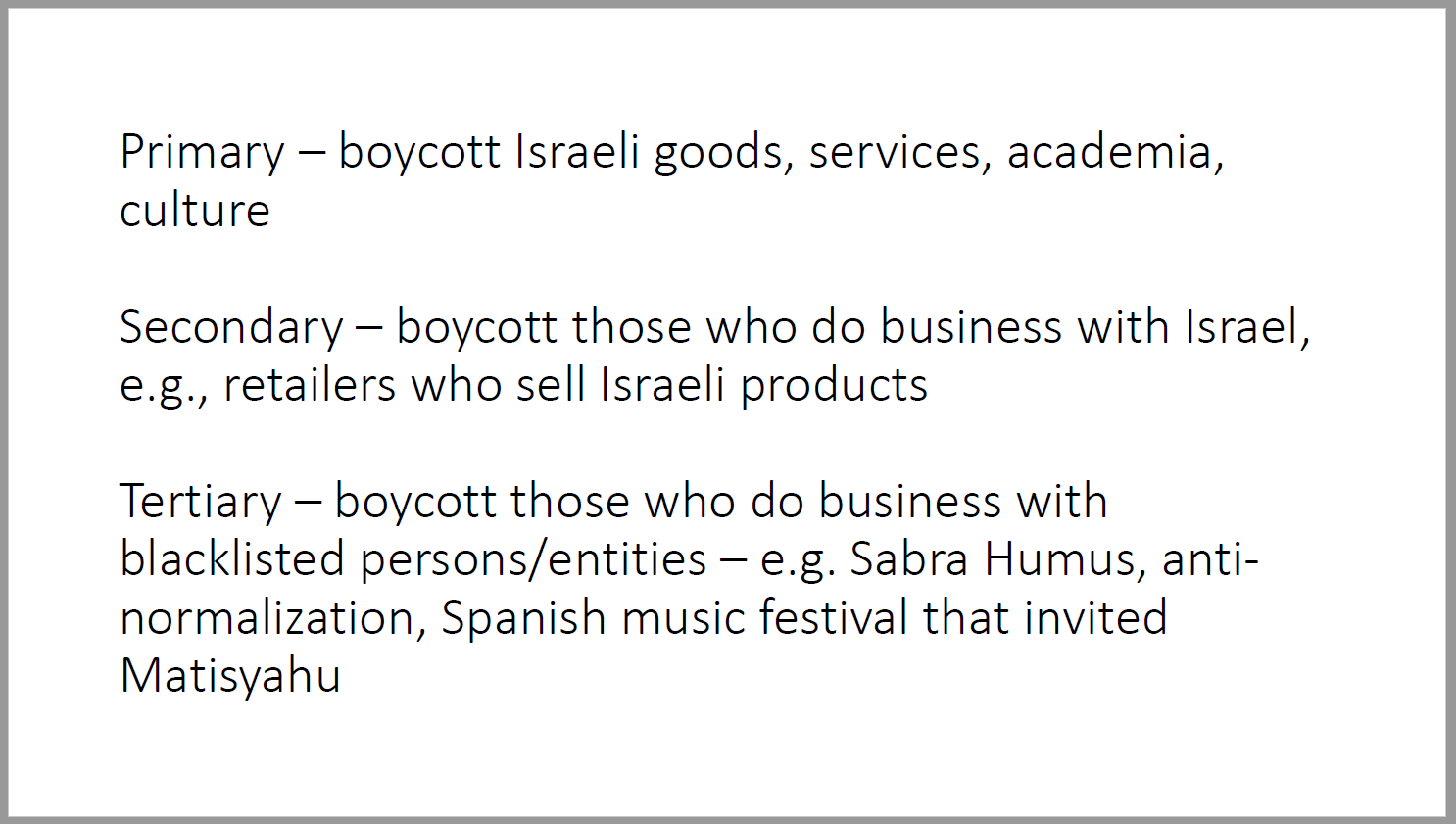 Since I was running out of time, I did a quick summary on the status of BDS in the United States – A small number of faculty-controlled professional organizations and some student governments are the only places BDS has had any measurable success, and even there is has been more ideological rather than substantive. In the Q&A, which is included in the video, I explained my assessment of BDS in much more detail. To me, its more of a generational ideological battle, than a meaningful threat to Israel in the short term. But that ideological battle is important, and needs to be fought over a long period of time.

I summed up my main presentation where I started.

The openly anti-Jewish boycott of the 1920s-1930s and the Arab League has been restructured as a non-governmental movement, and repackaged as a “social justice” and “anti-Apartheid” boycott in order to appeal to Western liberals.

But nothing has changed in reality. BDS is a continuation of the economic war against the Jews in Israel that has been in existence for almost a century. 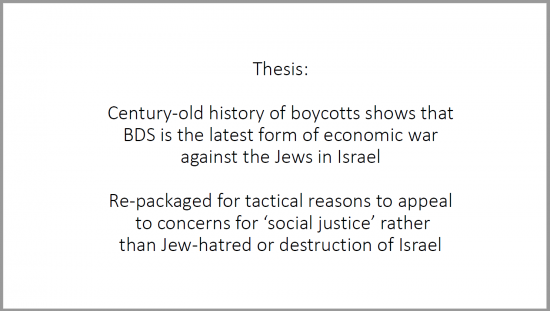 You can watch the video below, and the full Powerpoint slide show is below that.

Please feel free to share and use (with attribution, of course). People need to understand that the BDS narrative presented by faculty and students on campus is false, it’s not about the “occupation” or Palestinian civil society. It’s about economic war against the Jews in Israel. It always has been.

Keep going, Sir! The world needs more people like you exposing BDS for what it is.