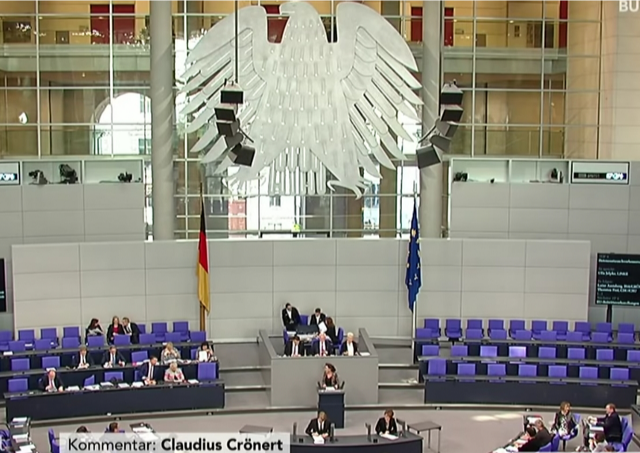 In a devastating blow to the Boycott, Divestment and Sanctions (BDS) movement against Israel, Germany’s parliament has passed a resolution condemning BDS as antisemitic.

The resolution titled “Stand Resolutely Against the BDS Movement: Combat Antisemitism” calls for cutting state funding to organizations supporting anti-Israel boycott. The motion is first of its kind adopted by any European country.

The resolution received support from the ruling Christian Conservatives (CDU-CSU) and Social Democrats (SPD), along the center-right Free Democrats (FDP) and the ecological Green party. Most lawmakers belonging to the left-wing party Die Linke, successor of the East German communist party, and some Green party MPs abstained from voting.

“The German Bundestag condemns all antisemitic comments and attacks that are formulated as supposed criticism of Israel, but in reality are an expression of hatred of the Jewish people and their religion,” the resolution said. “The argumentation patterns and methods used by the BDS movement are antisemitic,” it added. The two-page motion compared the anti-Israel boycott campaign to the Nazi boycott of Jewish businesses.

The Bundestag website released a statement announcing the resolution:

The German parliament passed a resolution on Friday, May 17, 2019 titled “Stand Resolutely Against the BDS Movement: Combat Antisemitism” (19/10191) by the parties CDU-CSU, SPD, FDP and Alliance 90-The Greens. The CDU-CSU, SPD, FDP and majority of the member of the Alliance 90-The Greens and the independent lawmaker Mario Mieruch voted in favor of the motion. Most of those belonging to the Die Linke parliamentary group and some member of the Green faction abstained from voting. (…)

As the adopted resolution of the four parliamentary groups states: The “Boycott, Divestment and Sanctions”-movement (abbreviated BDS) has called for — in Germany too — a boycott against Israel; against Israeli products and services; and against Israeli artists, scientists and sportsmen. The all-encompassing call for boycott in its radical [nature] leads to the stigmatization of Israeli citizens and members of Jewish faith in general. This is unacceptable and must be condemned in sharp terms.

With adoption of the resolution, the Bundestag welcomes the fact that numerous city municipalities have already decided to deny financial support and allocation of public spaces to the BDS movement, as well as groups that pursue the objectives of the campaign. Thereby, the Bundestag stands firmly against every form of Antisemitism — even in its formative stages — and condemns the BDS campaign and boycott calls. In addition to that, organizations that question Israel’s right to exist should not be supported financially . Projects that call for boycott or support BDS Movement should not be promoted financially. [Translated from Germany by the author]

Prime Minister Benjamin Netanyahu:
I congratulate the German Bundestag on the important decision branding the boycott movement (BDS) as an anti-semitic movement and announcing that it is forbidden to fund it.

The Bundestag has just adopted a Resolution condemning BDS and Anti-Semitism by a wide margin. We welcome this initiative by its sponsors. It has broader European significance given that BDS makes no attempt to build coexistence and peace between Israel and all of its neighbors.

The Bundestag resolution could have legal implications for German state-funded organisations working with BDS-supporting NGOs and ‘charities’. German state-run agencies is among the leading sponsors of the BDS campaign, data collected by the Jerusalem-based watchdog NGO Monitor shows. “The German federal government provides millions of euros to political advocacy NGOs in Israel and the Palestinian Authority, through a variety of frameworks,” watchdog’s 2018 report said.

“The resolution goes too far,” president of the Green party’s Heinrich Böll Foundation, Barbara Unmüßig, complained. “We made a lot phone calls. And we debated our point of view with other political foundations and the Green party’s parliamentary group,” Unmüßig said, detailing her organizations efforts to sabotage the resolution. The Green party’s foundation, which receives million of taxpayers’ euros each year, has been funding NGOs and activists running anti-Israel campaigns.

German funds also reach BDS groups through the European Union. “The European Union (EU) is the largest governmental funder for NGOs active in the Arab-Israeli conflict, including some of the most radical and politicized groups. ” NGO Monitor says.

The Bundestag resolution, not only takes a moral stand against the antisemitic BDS Movement, it also creates legal grounds for challenging the German and EU funding for the boycott campaign. Given the intricate funding network funneling German taxpayers’ money to anti-Israel groups, it will take great political will and concerted effort between German and Israel authorities to drain the BDS swamp.

That’s a start. Maybe the Merkel government can stop being a door mat for Islam.

Let’s hope it becomes a trend.

Long overdue. It is imperative to treat dhimmi, Leftist, useful idiot supporters, enablers, whitewashers, rationalizers and excusers of Islamic supremacism, totalitarianism, belligerence and Jew-hatred as the contemptible, goose-stepping collaborators that they are. Give no quarter.

On balance, I think that Muslims are marginally worse than Neo Nazis.

Some progress. But Germany won’t be Germany in a generation or two. It will be Islamic.

Unless they wise up and expel Muslims.