In reaction to Women’s March leaders’ Farrakhan embrace and anti-Israel progressives, new group calls on Democrats to “Say NO to antisemitism!”

In reaction to Women’s March leaders’ Farrakhan embrace and anti-Israel progressives, new group calls on Democrats to “Say NO to antisemitism!” 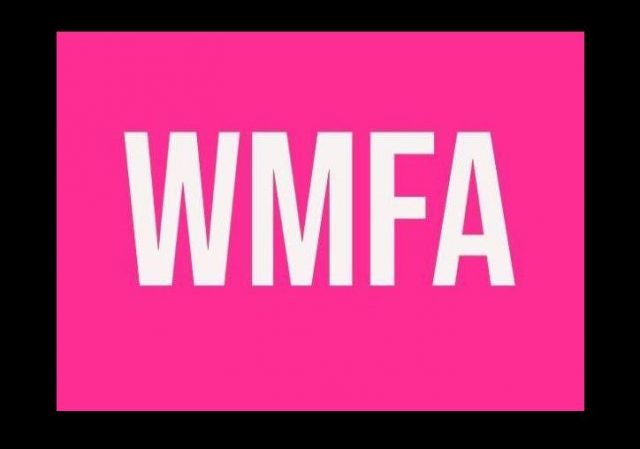 The Women’s March has been rocked by its association with anti-Israel and anti-Semitic figures almost from inception.

In February 2017, we wrote how Convicted terrorist Rasmea Odeh co-organized March 8 #DayWithoutAWoman, and we followed up in January 2018, Anti-Israel activists attempt to hijack Women’s March – again:

During the 2017 Women’s March on Washington and follow up Women’s Strike, anti-Israel activists attempted to hijack the movement.

Anti-Israel activist Linda Sarsour attempted to steer the movement against Israel, and the Women’s Strike was co-organized by and honored convicted supermarket bomber murderer (and immigration fraudster) Rasmea Odeh.

This fits a consistent pattern of such hijackings, something we have documented for years. I summarized years of such hijacking in my post about how a U. Illinois “anti-fascism” event turned into an anti-Israel event, Anti-Israel Rally at U. Illinois: “No Zionists, no KKK, resisting fascists all the way”…

There is a movement to counter this anti-Israel narrative, by the Zioness Movement, a pro-Israel progressive women’s group.

At some point groups will refuse to allow the hijacking of their causes by anti-Israel activists. I don’t think we’ve reached that point yet, though.

Linda Sarsour, one of the leaders of the Women’s March, has made a concerted effort to exclude Zionist women from the progressive movement.

During the speech, Farrakhan railed against the “Satanic Jew.” …

This isn’t Mallory’s first tango with Farrakhan. It’s not like she curiously attended a speech seeking to broaden her horizons, only to find out Farrakhan was a despicable antisemite. Mallory shared the stage with Farrakhan at a 2015 Savior’s Day speech and eagerly awaited his “hardcore truth.” …

In 2015, Perez and Mallory posed, holding hands with Farrakhan. Perez referred to him as The Minister Farrakhan and said she was “humbled to work with these special people” …

These women have been mentored by Farrakhan for years, so why is this time any different? Mainstream media pressure. Despite copious amounts of information and evidence showing three of four Women’s March co-chair’s involvement with Farrakhan, only now is the press taking an interest. 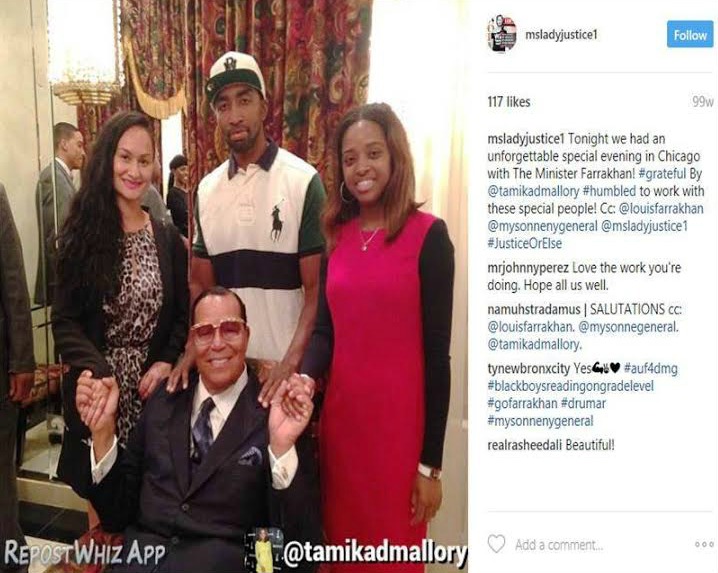 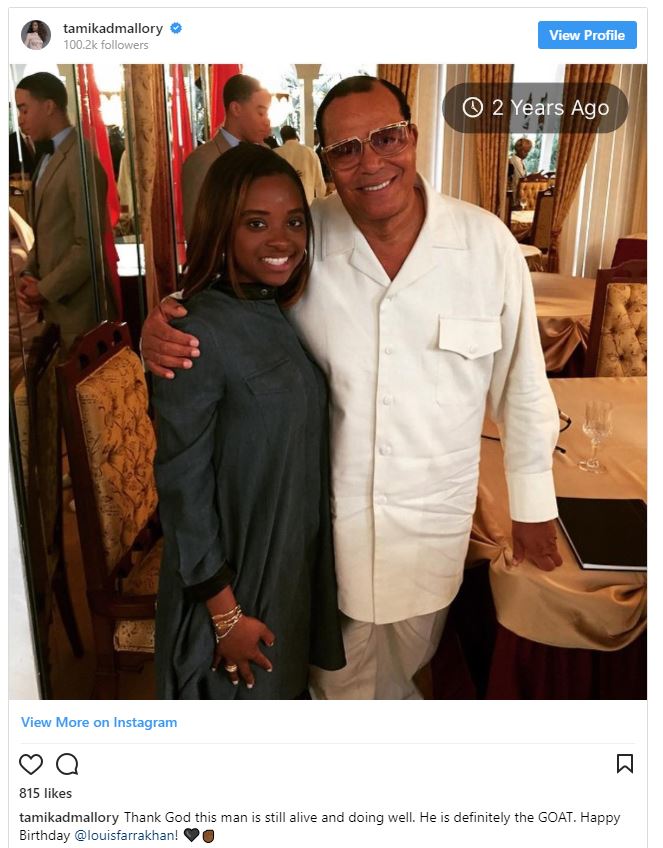 The reaction from many Women’s March members was to vote with their feet, Women’s March Loses Members Due to Leaders’ Ties to Farrakhan.

A group called Women’s March For All was founded as an alternative.

There’s no doubt about the group’s left-wing and anti-Trump politics.

Women’s March for All was formed in response to the National Women’s March leadership’s support for and affiliation with Louis Farrakhan and the Nation of Islam, both of which are highlighted on the Southern Poverty Law Center’s Hatewatch List. We started with a petition demanding that the Women’s March Leaders resign to restore viability and integrity to the Women’s March. Due to overwhelming support for our objective, our numbers grew and we evolved into a watchdog and action group. Maintaining affiliations with persons or organizations that promote homophobia, anti-Semitism, misogyny, and transphobia or Islamophobia is unacceptable for any progressive group.

It’s hard to tell how much the group has grown, but it has taken a bold move that goes directly to the anti-Semitism of the Women’s March and the broader progressive activist community.

A liberal women’s rights group is calling on the Democratic National Committee to adopt an official definition of antisemitism to combat a “rising tide” of anti-Jewish discrimination in the party.

In a petition launched on Friday and signed by some 120 people, Women’s March For All (WMFA) warned that antisemitism — “often cloaked as anti-Zionism” — “has now become a serious problem in liberal movements worldwide,” including in Canada and the United Kingdom….

An official statement distancing the Women’s March from Farrakhan was dismissed by some as insufficient, with several regional chapters criticizing movement leaders and nearly 4,000 people signing a petition calling for their replacement.

Nisi Jacobs, who helped draft that petition, later went on to launch WMFA. The group has since drawn attention for its opposition to antisemitism in left-wing spaces, as well as for its fundraiser on behalf of the Occupy Lafayette Park protests outside the White House, which has raised more than $13,000.

It warned that some candidates from the edges of the Democratic Party “have made horrible and libelous remarks about Jews and Israel,” including Maria Estrada — who accused Israel of “genocide” and expressed support for Farrakhan — and Leslie Cockburn, who wrote a book that a New York Times reviewer said suggests that Israel is “somewhere behind just about everything that ails us.”

Also identified are Julia Salazar and Alexandria Ocasio-Cortez, two candidates affiliated with the Democratic Socialists of America, which supports the boycott, divestment, and sanctions (BDS) campaign against Israel — a Palestinian-led movement whose co-founder has rejected the notion that Jewish people have a right to national self-determination.

Noting that “most Jews are both Democrats and Zionists (i.e. supporters of Israel’s right to exist),” WMFA called on the DNC to endorse the International Holocaust Remembrance Alliance (IHRA) definition of antisemitism, which has been adopted by 31 members countries including the US.

The Petition is here, and contains this explanation (in part): 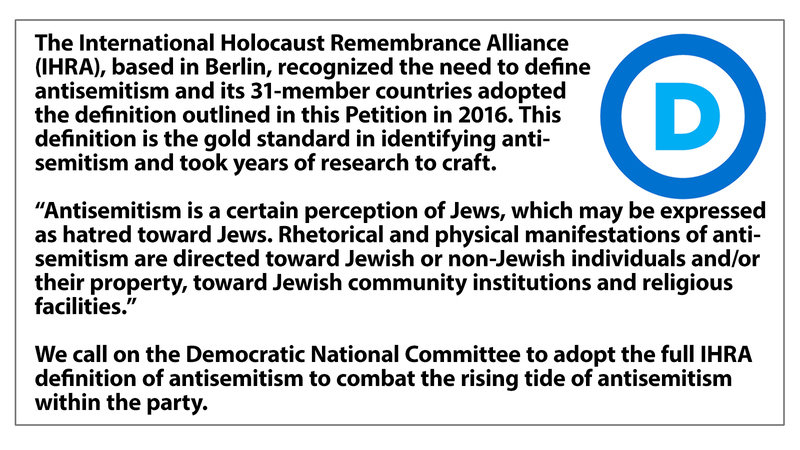 We have seen examples of this ilk creeping into the Democratic Party, with candidates like Ilhan Omar, Maria Estrada, Leslie Cockburn, Kyrsten Sinema, Thomas Lopez-Pierre, Julia Salazar, and Alexandria Ocasio-Cortez, the latter two belonging to the Democratic Socialists of America organization that has singled out Israel on their platform by promoting its destruction, and standing politicians such as Trayon White and Diane Richardson.  Each of these candidates and standing politicians have made horrible and libelous remarks about Jews and Israel.  We’ve also seen a tacit version of this antisemitism when standing politicians who happen to be Democrats are willing to meet with, hug, and otherwise normalize a vicious antisemite like Louis Farrakhan.

The proposed definition of anti-Semitism provides, in part (emphasis added):

Antisemitism is a certain perception of Jews, which may be expressed as hatred toward Jews. Rhetorical and physical manifestations of antisemitism are directed toward Jewish or non-Jewish individuals and/or their property, toward Jewish community institutions and religious facilities.

This definition is a direct challenge to the anti-Israel contingent in the Democratic Party, because it recognizes that in the real world, anti-Zionism and anti-Semitism are one and the same. Yes, there is a theoretical difference, but on the streets of Paris and other European cities, on U.S. campuses, and throughout the Middle East, theory gives way to reality.

It will be interesting to see if this gains any traction. Don’t hold your breath.

I am wondering how long it will take Jews to bail on the Democratic party. One thing the Dems are realling excelling at is converting Dems to independents or even Republicans.

Pursuing the intersectionality nonsense may eventually be the end of them.

Probably never. They haven’t bailed on them despite decades of overt anti-semitism by the party at large. A couple idiots running a group most people don’t even care about isn’t going to change anything.

The Orthodox and those who truly love Israel have already turned, they recognize the old Enemy, come back in a fresh disguise. The Reform movement, on the other hand, is ready to openly support the destruction of Israel, because it’s existence challenges their political desires.

Supporting Israel is a fringe position in the Democratic party.

Americans don’t have the antisemitic history the British have which is the only thing keeping the Democratic party from reaching the depths of the Labour party and Jeremy Corbyn. So far.

This close tie in with Farrakhan by the left only signals it has entered its decadent late phase, and it is deeply vulnerable. Deeply vulnerable to better ideas that bring competence and unity. The things that are anathema to the left.

This effort isn’t going to fly. Anti-Israel sentiment and anti-Semitism (one and the same, as far as I’m concerned, despite Leftists’ disingenuous attempts to draw a distinction between the two) represent unabashed, mainstream doctrine in the contemporary Dumb-o-crat Party. As we saw during the 2016 Dumb-o-crat convention. As we’ve seen with the Dumbs’ unabashed and enthusiastic embrace of vile and transparent anti-Semites and Islamic supremacists, from Farrakhan to Keith Ellison to Linda Sarsour. Bashing Israel as an alleged stand-in for apartheid-era South Africa, while lamenting the alleged victimhood of the poor, oppressed, Black South African Arab “Palestinians,” is a self-aggrandizing, self-congratulatory fashion statement, a way of proving your Leftist bona fides to your virtue-signaling SJW peers.

Because the entire Leftist ethos is predicated upon crafting and disseminating contrived and fallacious “victim”/”oppressor” narratives, no matter what facts and objective reality indicate, this narrative is never going away.

Yeah – this “movement” is about like a few stormtroopers girlfriends putting together a pamphlet asking Herr Hitler to please not be so mean.

Across the world and including the U.S. one of the fundamental aspects of leftism is jew hatred. It’s just who they are. The biggest breeding ground for jew hatred is the leftist universities and the stupid youth is the driving force of the Left today.

This effort will be as successful as the effort to put God back into the DNC platform during their convention in 2012. If your party openly boos and jeers God, how do you think they are going to treat Jews?

More and more the Democratic Party is emulating the anti-Semitism of the UK Labour Party. It is doubtful that direct appeals to the present Democratic leadership to change its path will be successful.

Instead, the Republican Party should be urged to adopt the IHRA definition of anti-Semitism and to enact similar legislation pending in Congress. If that happens, the Democractic Party will find itself isolated unless it follows suit and also adopts the IHRA definition.