“As a feminist Zionist, I can’t believe I am being asked to choose or even defend my religious, historical and cultural identity.” 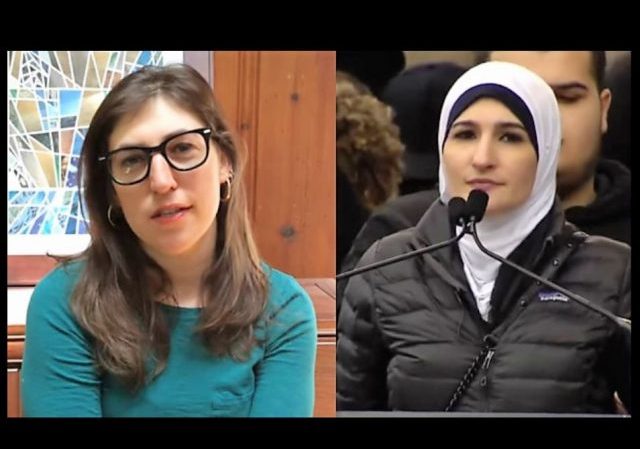 Big Bang Star Mayim Bialik has a strong response to Palestinian activist Linda Sarsour’s claims that a Zionist cannot be a feminist.

Sarsour’s attack on Zionist feminists took place in a column in the far-left The Nation magazine, Can You Be a Zionist Feminist? Linda Sarsour Says No.

Sarsour has generated much controversy because while she claims to be a progressive, she endorses Sharia law and has viciously attacked people like Ayaan Hirsi Ali. Sarsour tweeted that Ali should not even be allowed to have a vagina; that was a particularly malicious accusation given that Ali underwent female genital mutilation as a child.

Yet Sarsour, despite her regressive views and embrace of female-abusing Islamism, has become one of the faces of the Women’s March and related protests. Sarsour uses that position to try to drive out liberal feminists who support Israel.

Bialik was having none of it, and wrote at her website Groknation:

“Zionism is the belief in the right of the Jewish people to have an autonomous state in Israel,” Bialik, an Orthodox Jew, wrote in a post on her website GrokNation. “I am a Zionist. Feminism is the belief that a woman-driven movement can bring about race, class and gender equality and that women deserve all of the rights and privileges afforded to men. I am a feminist.”

Bialik reminds Sarsour the atrocities women face in the Muslim world on a regular basis:

Are there things that happen in Israel and the Palestinian territories which cause pain and suffering to women? Absolutely. And being a Zionist doesn’t mean a definitional indifference to this suffering, especially of Palestinian women and children. The question is this: Many countries – many Muslim countries, in fact – perpetrate atrocities against women which include: female genital mutilation, forced marriages, child brides, systematic abuse of women by the justice system, revenge rape and honor killing. Why is Israel held to a standard none of these other countries – whose offenses are, arguably more extreme – are held to? And why is belief in the State of Israel something that should exclude women – or men, for that matter – from identifying as feminists?

Accusing Zionism of being incompatible with feminism is exceptionally short-sighted. It smarts of a broad-stroke bias against the entire Jewish people for the violations that occur in a state that was founded on the principles of Zionism. That’s not good. Bad things happen when we paint with such a broad brush. It’s bigotry.

Sarsour claims Zionism is inconsistent with feminism but she strongly supports Sharia Law.

That awkward moment when you realize the organizer of the #WomensMarch is pro Sharia Law, the very opposite of women's rights. #AddHerName pic.twitter.com/r3AZywd9oA

@DawudWalid they don't know the 1st thing about Sharia Law! If they did, they would all become Moozlums. Hahaha. #GOP

If only my fellow liberals understood what Sharia Law actually is. Smh. #ScaliaLaw

Sarsour supports a system that inflicts everything on women that Bialik describes, but somehow she claims to be the feminist in this situation.

Bialik cannot understand the hatred and abuse thrown towards Israel:

As a feminist Zionist, I can’t believe I am being asked to choose or even defend my religious, historical and cultural identity. The “left” needs to reexamine the microscope they use to look at Israel, and we all need to take a step back and remember we are stronger together: women, men, lovers of peace, and lovers of freedom and justice.

Bialik regularly defends her faith and Israel on her blog and to the media. In 2015, she told Fox News that she received numerous anti-semitic threats because she visited Israel:

“I’ve gotten a lot of negative attention for visiting Israel,” she told FOX411. She was visiting a friend in the Israel Defense Forces. “That’s what’s amazing…simply by going to Israel this summer and saying nothing more than, ‘I’ve gone to Israel,’ I got the same amount of hatred and threats and anti-Semitism for actually making a statement trying to support people whether I like it or not are serving in an army.”

She continued, “That reveals the truth. It really doesn’t matter what I support or believe the fact that I’m Jewish and go there is enough – that should be alarming to most people.”

She also told the network that those in Hollywood don’t share a very friendly attitude towards those who hold their faith close to their hearts:

“I think in general it’s never going to be trendy to be observant or religious in Hollywood circles,” she said candidly. “There are people I know of faith and we tend to congregate together. I study Jewish texts weekly. That’s something really positive to me when you’re a person of faith, it stays with you all the time.”

Good for her. Where are the Sarah Silvermans, and Barbara Streisands?

Being fitted for a deluxe hijab.

Barbra is too busy eating.

Linda sar-SOUR is a true Islamic Supremacist and is practicing taqiyah, the Prophet-originated doctrine of lying to the infidels about every tenet of his so-called ‘religion’. You only begin speaking the truth to infidels when they have been conquered, or you have become so numerous and powerful that no infidel can stand against them.

As for Brigitte Gabriel and Ayaan Hirsi Ali “not deserving to be women”? How would this piece of human filth know the first thing about that subject? She is a supporter of and cheerleader for Rasmea Odious, serial liar, convicted murderer, and illegal alien awaiting final trial and deportation; this is not the curriculum vitae one associates with womanhood!

Rather, a Muslim cannot be a feminist.

I wonder how Linda feels about Ahlam Tamimi?

Down deep my guess is she is a hero for the cause.

I think somewhere recently I saw an anti-Trump comment from Bialik. Good for her now, seeing the negative side of these “feminist” radicals.

“Good for her. Where are the Sarah Silvermans…..”

Last I saw of Silverman she was goading on the military to take out Trump.

Feminist community turns on Mayim in 3…2…1…