Gallup revealed a poll today that shows 38% of Americans expressed satisfaction with the direction of America.

While that may not appear as a big deal, it’s the highest it’s been in 12 years. 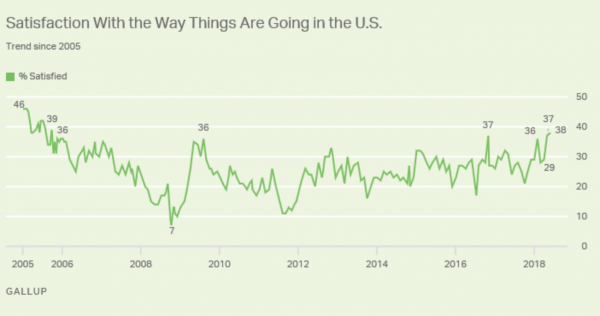 The number isn’t all that shocking considering our economy is doing very well. The May jobs report showed unemployment at 3.8%, the lowest it’s been in 18 years. College graduate unemployment is at 2% while “workers 25 years and older with less than a high-school diploma” have an unemployment rate of 5.4%, which is “down from 6.2% a year earlier.”

Hourly earnings went up 8 cents in May to $26.96, which is an indication that the “strong pace of hiring is encouraging employers to raise pay to secure workers.”

Trump signed the tax bill into law at the end of December, which meant more money in the pockets of Americans and businesses, which allowed the businesses to invest more money into capital spending.

The Iran nuclear deal may also have an effect on the Gallup numbers. President Donald Trump announced in May that America has withdrawn from the deal since it failed to protect our national security.

Let’s not forget Trump’s historical meeting with North Korean dictator Kim Jong Un. While the meeting didn’t immediately end the North Korea threat or united the Korean peninsula, it was still a major starting point since no American president has even met with a North Korean leader. It looks like the dictator will denuclearize his nation, but Secretary of State Mike Pompeo reminded everyone, especially Kim, that sanctions will remain in place until that happens.

This isn’t so shocking. Satisfaction with America’s direction spiked nine points amongst Republicans and Independents, which gave Gallup the 38%. The Democrats have not changed. 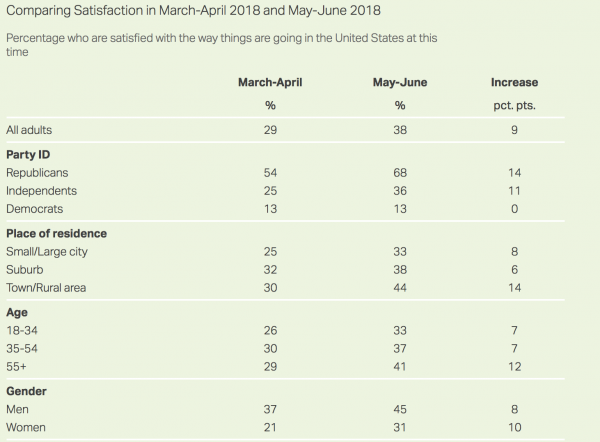 It Shouldn’t be Partisan

Gallup concludes that the poll “reflects more than a growing comfort with Donald Trump as president” as the “growth in satisfaction has outstripped growth in Trump’s approval rating.” Us in flyover country care the most about the economy and if we can provide for our families.

This is why I included the Iran nuclear deal and the North Korea summit.

The numbers may change as the days go by since we’re gearing up for a tense showdown in November for midterms. The GOP holds the Senate by a slim margin and the Democrats are doing everything they can to win back the House.

And yet, Obama told us that this kind of prosperity would never come again, and we’d have to get used to the “new normal.”
An odd position, coming from the guy who had “Yes We Can!” as a campaign slogan.

Obama was – and always will be – a nauseating imbecile.

No matter how good it may get, it seems as though we have two Americas. Ones that could be characterized by those famous words of Charles Dickens:

It remains to be seen which of these will dominate or whether the divisiveness will continue for quite some time.

Makes you wonder what the numbers would be if the MSM wasn’t constantly attacking President Trump and his administration.

Bush sucked and the media made a raging ass of him.

Obama was a low-brow, racist fool and a traitor.

Trump is making a raging ass of the media. He’s in inclusive genius and gorgeous patriot.

So What’s the mystery?

And the latest crass and baseless deflection is ‘Nazi concentration camps on the border’. Anyone else notice how every leftist is singing this tune since the IG report came out? And we thought Journolist was dead. OK, maybe not all of us.

“This isn’t so shocking. Satisfaction with America’s direction spiked nine points amongst Republicans and Independents, which gave Gallup the 38%. The Democrats have not changed.”

Sorehead losers, and until they change, Democrats will continue to lose.

Among the Democratic resisters Trump will never be given credit for anything positive that he does.TDS is still alive and well.