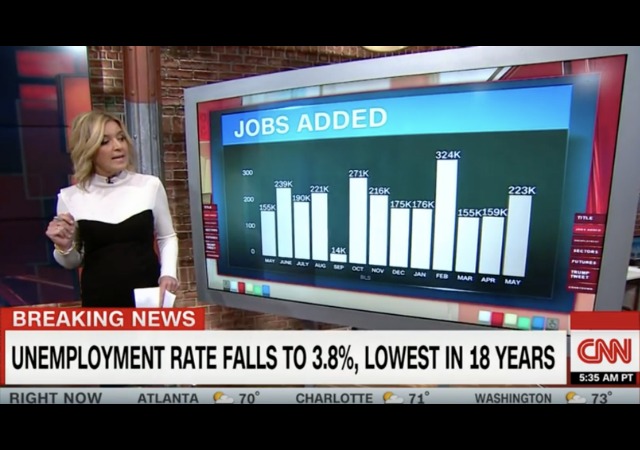 The May jobs report came in better than expected! Employers added more jobs, wages went up, and the unemployment rate is 3.8%, which is the lowest it’s been in 18 years.

Economists predicted job growth of 190,000 for May, but the report shows that employers added 223,000 jobs last month. From The Wall Street Journal:

In retail, 31,000 new jobs were added, with gains focused in general merchandise stores, and building materials and garden supply stores.

In the health care sector, the 29,000 new jobs last month were from abulatory health care and hospitals.

In construction, nonresidential specialty trade contractors contributed to the 25,000 new jobs added in the sector.

Other sectors that the Labor Department highlighted included professional and technical services, transportation and warehousing, manufacturing, and mining

In April, we dwelled upon the stale wage growth, but that changed in May. Hourly earnings went up 8 cents in May to $26.92. It’s an indication that the “strong pace of hiring is encouraging employers to raise pay to secure workers.” 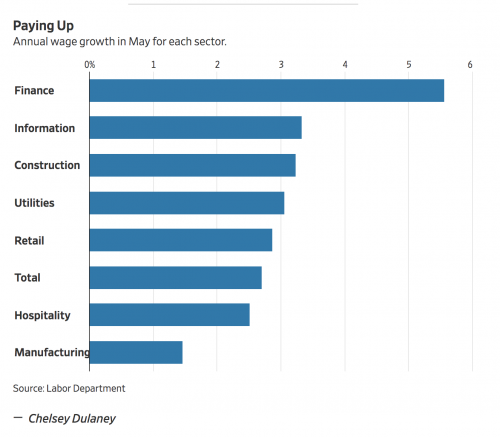 It’s not a lot, but it could help delay a recession. From Fox Business:

“Companies have not been hiking wages with businesses cautious about a recession. They are having extreme discipline at the end of the business cycle,” Sameer Samana, global quantitative and technical strategist with Wells Fargo Investment Institute told FOX Business.

Excesses in the market usually trigger a recession – and the fact that companies are not overextending themselves could prolong the economic growth cycle, he added.

Despite these decent numbers, the report also showed a weak participation in the labor force:

The May jobs report brought another curious decline in the share of Americans working or looking for a job, with the labor force participation rate edging down to 62.7% from 62.8% in April.

Many economists thought rising wages and strong hiring would encourage adults to reenter the job market. While participation has improved slightly over the past few years, it is still near the smallest share of adults participating since the late 1970s, a time when women were still entering the workforce in greater numbers.

We all know that those numbers, like all govt stats, are not accurate.

But I’ll take all the good news we can get between now and election day in November.

During the Obama administration, a great number of statistical changes were made to the unemployment figure calculations in order to bring them to a more comfortable level. (Also economic growth, which always ‘unexpectedly!’ was adjusted downward after the initial announcement)

I suspect the new administration simply left the exact same processes in place, so that any criticism of their methodology can simply be passed back to the people who originally made the changes. Meanwhile, measuring with the same warped ruler gives much larger numbers, so *something* Trump is doing is producing more economic growth than the tax-raising, regulation-cramming administration before.

Imagine the pain of liberals that we can enjoy for the next two years if Republicans actually gain seats in Congress in November. But holding all they have would be a good achievement and a de jure rejection of CPUSA-DNC’s bullshit.

I laugh at your pain leftists!

I don’t watch or read the dinosaur media much anymore. Is is still “unexpectedly”?

Read anything by Nassim Taleb regarding forecasts made by economists and you will consider them (the economists and their forecasts) nothing more than noise that is best ignored. No data is better than bad data.

OMG that book changed my life. Glad to know that there are others here who have read it.

It would be nice to have more insight into the participation levels. I’ve never watched the jobs numbers that closely, so it’s not clear to me if even a small decline in that measure means those are people who would be unhappy come the next election. Or it could be people that find the markets, day trading, etc., is more productive for them than 9 to 5 work somewhere.

If you include unemployed who’ve maxed out bennies and are no longer looking out of frustration, the number is… either 7.6% or 7.9% unemployment (I read it earlier today). That’s a decent number, but I’d like to know the trend on this metric – is it going up or down. Likely down, but how quickly?

Current unemployment is part of a long, steady trend, which began in 2009.

You mean when things couldn’t suck @## any worse than already. Yes, things are looking up.

Why is your GDP graph in hard numbers and not percentage growth? GDP growth is pretty much a given and percentages tell us how fast it is growing.

Shane: GDP growth is pretty much a given and percentages tell us how fast it is growing.

The growth rate is the slope of the line.

But for your convenience, here’s the GDP growth rate. Notice it was sharply negative in 2008, then trended positive. The graph is fairly noisy, with quarterly growth near or above 4% in several quarters, but other quarters showing weaker or even negative growth. There’s nothing that stands out about the current rate of growth.

Yup … flat growth. Which for a growing population is tantamount to stagnation.

Well, overall positive growth in GDP per capita. Again, there’s nothing remarkable since 2017. On the other hand, median household income lagged GDP per capita growth by 2-3 years. As the labor market has tightened, median incomes have risen accordingly.

Guess we’ll find out who gets credit in about 5 months.

I just love this. Which numbers are these Zachriel? G6 or G4?

I fucking loathe people that play this game, it is utterly dishonest.

Shane: Which numbers are these Zachriel? G6 or G4?

Um, neither. It’s not the unemployment rate, but the total non-farm payroll. But for reference, here’s U-6. Note that the data supports the same overall trend, with a sharp change in trend, followed by a long linear improvement. There’s nothing remarkable about the period after Trump took office.

This makes it clearer because it gives perspective on past performance of unemployment numbers. This is why Obama blamed Bush, but a large chunk of what happened landed squarely at the feet of Obama and his policies. He exacerbated an already bad situation. Remember Bush inherited the dot bomb. Please note I am not a fan of Bush and I think a lot of this is coming from the Federal Reserve and the choices of the Presidents appointments.

So once again based on the time line of the graphs given you are painting an untrue narrative.

Shane: This is why Obama blamed Bush, but a large chunk of what happened landed squarely at the feet of Obama and his policies.

The recession clearly had its roots before the Obama Administration, and there’s been a continuous improvement since then. And to the point we raised, there is no significant difference in the trend since Trump took office.

“And to the point we raised…”

“we” being the paid commie cabal of commenters.

Barry: “we” being the paid commie cabal of commenters.

For the record, we are not communist. We reject extremist ideology as antithetical to the health of human society, and strongly support the importance of markets and the right to property, seeing both as necessary bulwarks against tyranny and as engines of economic prosperity.

For the record, you are a communist. All communists lie, stating one thing while implementing just the opposite. The results are poverty for hundreds of millions and the murder of 100 million +. That is your legacy to date.

Barry: For the record, you are a communist. All communists lie …

By that reckoning, you are a communist agent — or a troll. Good luck with that.

No one is even slightly fooled by you. A commie you are, a paid to comment one at that, and everyone here knows it.

LOL. Neither he nor any Republican will ever win an election again!!! (Just adding to your sarcasm)

He is soooooooo smart that his policies kick in strongest after he leaves office…….Talk about leaving lasting effect legacy….

Obama is an imbecile. So are the hollywood retards who still shill for him.

According to the lefties, Obama waived that magic wand of his and left a fantastic economy for Trump.

Trump did not build that!

The Defeatist on that magic wand…

Here’s him waving his left hand:

Lunatic libs are still claiming the economy is stronger because obaaa ma left it in good shape.
I always answer them with a thank you obaaa ma for the yuge tax cut. They apparently don’t like that for some reason.

obama also kept the hawaii volcano from exploding from 2008 to 2016.