Just the tip of the anti-Israel violence on campuses. 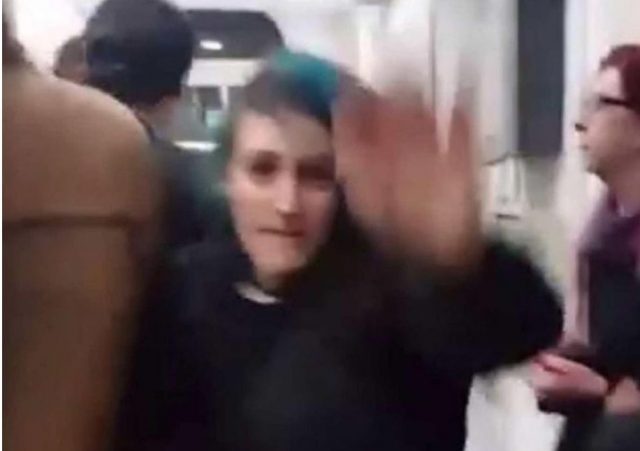 In January 2016, we addressed the rising tide of aggressive and sometimes violent conduct by anti-Israel protesters who disrupt appearances by Israeli and pro-Israel speakers, Anti-Israel protest at Kings College turns violent:

For several years we have been documenting the increasingly aggressive tactics of anti-Israel protesters on campus.

Recently, an Israeli professor’s guest lecture was disrupted at the University of Minnesota Law School, and the Palestine Solidarity Committee at UT-Austin (led by law student Mohammed Nabulsi) disrupted an Israeli Studies event….

Vassar SJP spread a Nazi cartoon; at UC-Davis SJP taunted Jewish students with chants of “Allahu Akbar;” dorm stormings have taken place at NYU, Northeastern and elsewhere; at Cornell University pro-Israel students peacefully holding signs were taunted and called “Zionist scum” and a lecture was disrupted as protesters took over the stage; at U. Galway in Ireland, a speech by a visiting left-wing pro-Israel Professor was disrupted with demands that he “get the f–k off our campus now.”

In all of these cases, the violence was directly tied to support for the Boycott, Divestment and Sanctions movement. There are many, many other examples.

Now there is another example, as protesters at Kings College in London violently tried to break into a visiting lecture by an Israeli speaker.

The videos of the Kings College riot were dramatic:

The Jewish Chronicle in Britain provides details on the conviction of one anti-Israel protesters for assaulting a student filming the protest:

A pro-Palestinian protester who disrupted a university’s Israel Society event has been found guilty of assault by beating.

Two Jewish students were subjected to a volley of abuse, including being called Nazis, as they held off a mob of demonstrators during the lecture at King’s College London in January.

The talk by Ami Ayalon, a former head of Israel’s Shin Bet security agency, was interrupted by activists banging on the windows, chanting, throwing chairs and setting off fire alarms.

She was given a conditional discharge for 28 days and ordered to pay compensation of £100 to the victim, Esther Endfield, as well as court costs of £200, and a victim surcharge of £20.

Ms Endfield, who was president of King’s Israel Society, told the JC at the time that she had been struck on the arm by a woman as she tried to film the scene on her mobile phone. 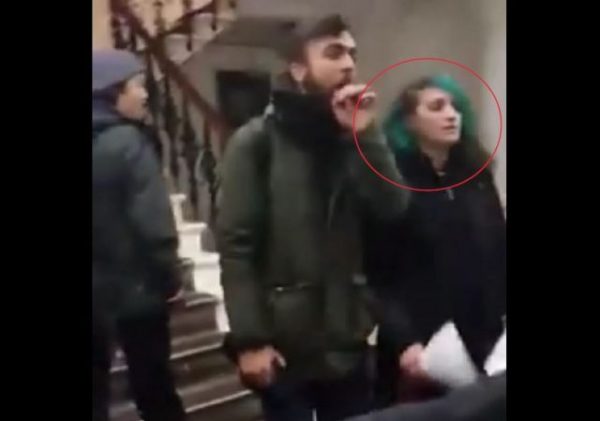 The Evening Standard published this image of Bevilacqua as she lunged for Enfield’s phone: 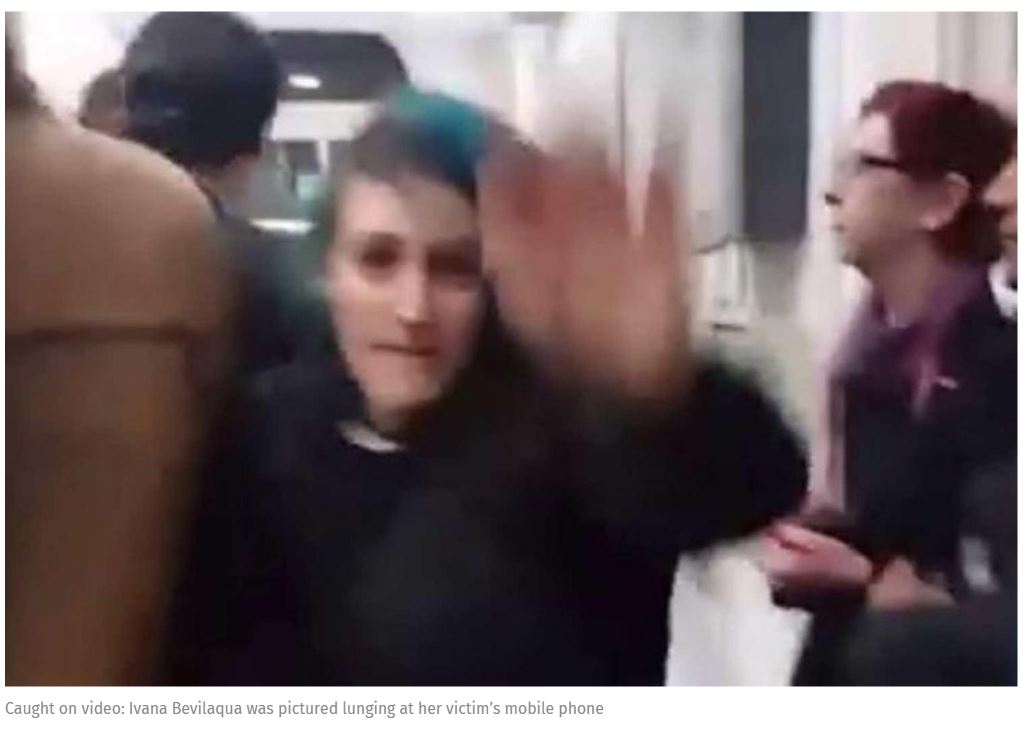 Bevilaqua says she grabbed the phone to stop Miss Endfield from filming as she did not want a video of herself posted online.

Bevilaqua, who is studying for a masters degree in politics and lectures in her native Italy about the Islamic State, said: ‘I only went there to go inside the room, I wanted to ask questions about why this talk was happening. I was peaceful.

‘I took documents of newspaper quotes as I wanted to show them to Mr Aylon as I could not believe that such a prestigious university would invite someone like him.

‘I just wanted to speak to this war criminal.

‘I was there queuing for one hour, I was one of the first there and on Facebook it did not say there was only 50 places.

‘Everyone behind me pushed and I was squeezed. I was angry at this because I was hurt and I reacted emotionally.

‘I asked her and another man to stop filming, when she did not I went to cover the camera with my hand.’ 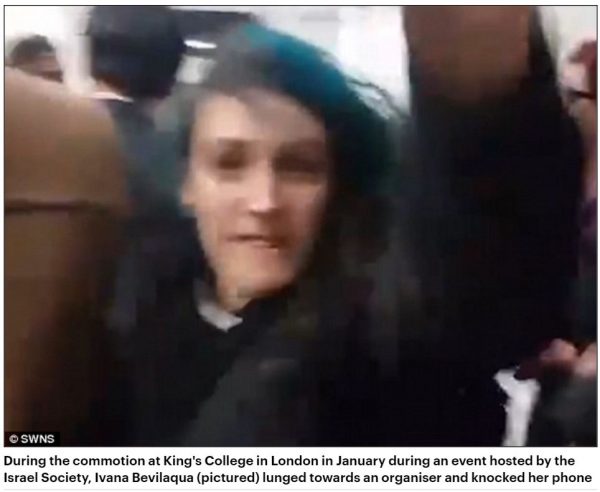 And who says there’s no rule of law?

Couldn’t have happened to a nicer person.