Exceeded Student Senate’s jurisdiction since it was primarily political, not involving “student welfare” 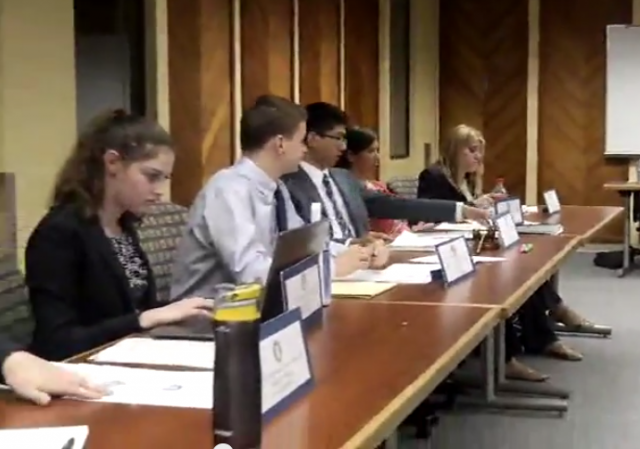 Anti-Israel divestment resolutions have had success in the U. California system this semester, including the bizarre and seriously mocked decision of the university-wide student council to divest not only from some companies doing business in Israel, but also from the U.S. government.

None of these resolutions are binding, but they are an important part of the War on Israel on campuses, in which anti-Israel groups seek to hijack every possible forum and to make everything about hating Israel.

One of the most controversial resolution sessions took place at the UC-Davis Student Senate, which passed a divestment resolution. 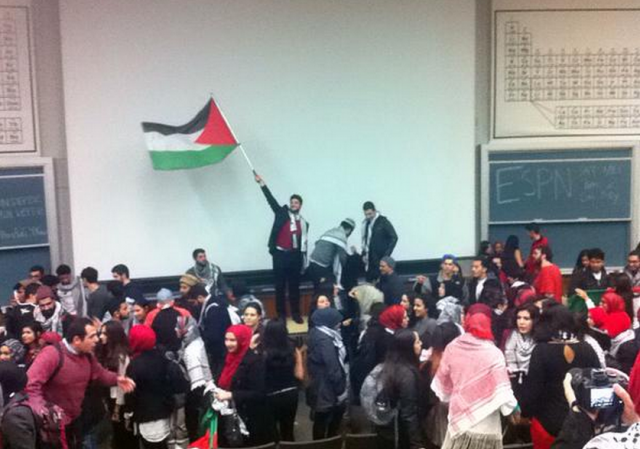 Supporters chanted “Allahu Akbar” at pro-Israel students, and swastikas were painted on a Jewish fraternity though no perpetrator has been identified so far (pro-divestment activists claim it is a hoax). A pro-divestment student leader posted on Facebook after the vote that “Hamas & Sharia law have taken over UC Davis. Brb crying over the resilience” though she claimed it was just satire.  All in all, it made for a poisonous campus atmosphere.

The divestment resolution was challenged in the student-run Court of Associated Students as beyond the scope of the Student Senate jurisdiction. Here is the argument Wednesday night:

In a stunning development, on Thursday morning, the student Court issued its decision that the divestment resolution violated the UC-Davis student government’s Constitution, since was primarily a policital document, and did not involve student welfare.

The decision was circulated with this cover email:

Having heard the arguments regarding Jonathan Mitchell v. Senate at 8pm on February 18th, 2015, the Bench has drafted this verdict as our decision on the case.

Please note that the Majority Opinion, which shall be released within five (5) academic days, shall have the complete reasoning behind our decision.

If you have any further questions, please contact me at this email or my phone number: [redacted].

Here is an excerpt from the decision (full embed at bottom of post):

In the case Jonathan Mitchell v. Senate of the Associated Students, University of California, Davis

This Bench, with five (5) in favor and one (1) abstention, finds the Senate of the Associated Students, University of California, Davis GUILTY of Article IV Subsection 5 of the ASUCD Constitution, regarding Senate Resolution #9, which states:

“The Senate shall, by a majority vote of the entire Senate, pass legislation to (1) adopt or revise policies and regulations for the smooth and efficient operation of the ASUCD, (2) express the opinions of the ASUCD on matters concerning student welfare, and (3) take other actions necessary to promote the welfare and interests of the ASUCD membership, subject to the limitations enumerated in this Constitution.”

The issues brought before us today are numerous and contentious. The Bench tackled each issue by piecemeal and has agreed on a number of topics that lay the groundwork for the decision. These issues, discussed at length within the Majority Opinion, all lead to a matter of Student Welfare. After much deliberation, this Bench concluded that Politicalized resolutions passed through Senate must be primarily concerning student welfare. Bylaw 800(C) states that,

A “Senate Resolution” shall consist of legislation used for expressing the views of the ASUCD Senate on any matter concerning student welfare. This may include, but is not limited to, stances on city, county, state and national political legislation and issues.

…. And We have found Senate Resolution #9 of 2015 to be PRIMARILY a political document and does not deal with student welfare to the extent that allows the ASUCD Senate jurisdiction to pass it. We also conclude however that Senate is free to pass Resolutions concerning “Divestment” and topics related to Senate Resolution #9 so long as the focus and primary purpose is of Student Welfare and not a political one.

Will the anti-Israel groups be back to try again? That’s for certain. 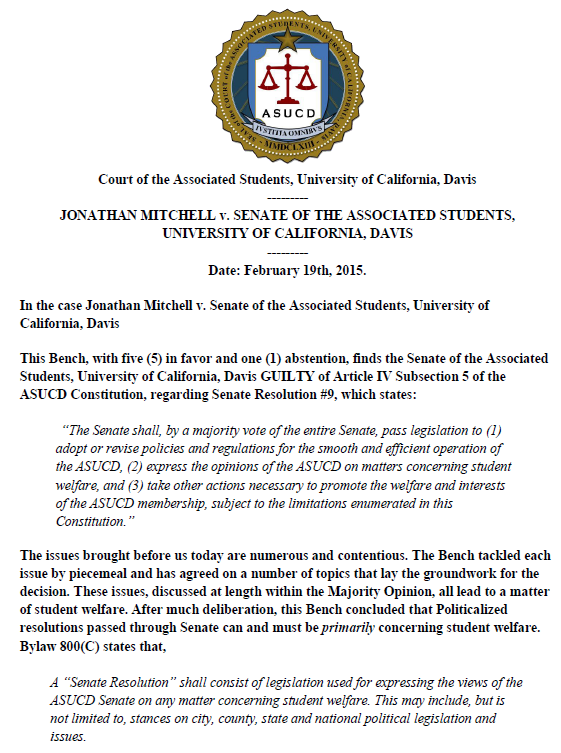 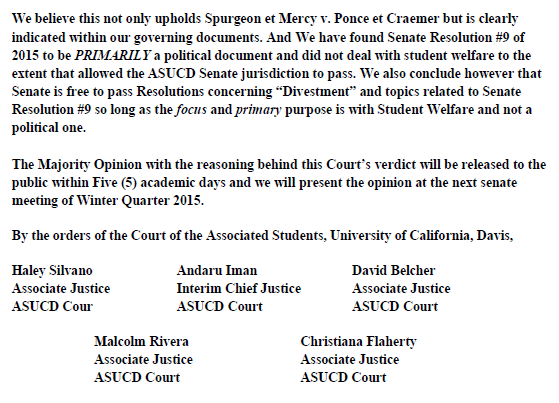 Sensible. But what is to prevent the student senate from arguing in their next vote that divestment is for the student welfare?

What did Churchill say about the young?

again I ask why students have any say in the business end of the college?
they get hired or something?
shut all these student governments and student courts down.

Ahhh, sanity at last from my Alma Mater…