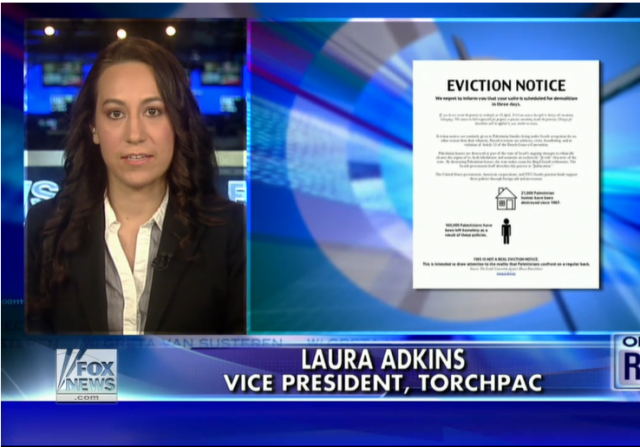 We covered the NYU “Dorm Storming” by Students for Justice for Palestine.

It’s now received national attention through Greta Van Susteren, who I think did a good job in this interview with Laura Adkins at focusing on the provocative nature of the act.

That’s something we’ve focused on. Of course it’s part of a greater BDS movement to demonize Israel, but it’s also an attempt to intimidate students in their bedrooms.

It violated NYU rules, which protect the privacy of students. If NYU takes no action, which is what I expect, then it has rendered students captives in their own dorm rooms. Rowan v. U.S. Post Office Dept., 397 U.S. 728, 738 (1970)

“We therefore categorically reject the argument that a vendor has a right under the Constitution or otherwise to send unwanted material into the home of another…. That we are often ‘captives’ outside the sanctuary of the home and subject to objectionable speech and other sound does not mean we must be captives everywhere.”

So what is NYU going to do?

Brush it under the rug, and refuse to enforce the rules as to SJP that apply to everyone regardless of content? Fox News reports:

NYU spokesman John Beckman said in a statement that the university encourages free speech but not when it’s meant to “simply provoke.”

He said in a statement that a flier titled “eviction notice” and anonymously slipped under doors at night “is not an invitation to thoughtful, open discussion.”

“It is disappointingly inconsistent with standards we expect to prevail in a scholarly community,” the statement said.

Beckman said officials would talk with students in the affected dormitory halls, Lafayette and Palladium, and will “follow up appropriately.”

My email to NYU’s spokesman seeking clarification on what steps, if any, NYU will take in response to this clear and deliberate rule violation, has not been returned as of this writing.

We have seen a rising tide of provocations on campus, and maybe those need to be tolerated in the interest of open discussion. But universities should draw the line somewhere, and the dorm room door is that place.

Does the administration know what individual students were responsible for this? (Were they even students?)

I can just imagine Himmler saying, “Hey, we also killed Slavs, Gypsies, Homosexuals, and other Undesirables. Enough of this talk of targeting Jews!”

I happened to catch Greta’s show yesterday. She also did a segment interviewing the female Democrat candidate, DeFranco, who you posted about. Greta also had a panel of folks to discuss her DeFranco interview afterward. So Greta committed a fair amount of time to both stories that I first learned about here at Legal Insurrection.

It made me wonder if you are secretly an executive producer of “On the Record” in your spare time.

I wonder if NYU’s reaction would be stronger if flyers containing graphic photographs of aborted fetuses were placed under pro-life students doors?

Put that “brought to you by Islamic Jihad, Al Fatah, Hamas, and Hezbollah” flyer (https://legalinsurrection.com/2014/04/dorm-storming-at-nyu-targets-jewish-students/comment-page-1/#comment-515068) under the doors of all students and see what NYU administrators will do. They will not dither. The new terroristic “minority” in America is to be protected at all costs. Fear is a wonderful incentive.

“It violated NYU rules, which protect the privacy of students.”

But I think we all know that the single word which best typifies college/university administrations today, that word is….

I’m expecting either Media Matters or The Onion to soon have a headline along these lines:

What needs to happen is a Republican in the White House to order all federal funds withheld from universities that violate student rights.

And then to get the government out of funding and subsidizing higher education altogether, so NYU can run its own show – and on its own dime.

The media happily attacked Clive Bundy for stating a truth about modern liberalism and its destruction of America’s families (black, white, hispanic). But silence in the face of blatant active anti-Semitism and attacks on Christians, conservatives and Republicans. They’d be falling all over themselves if someone had slid flyers denigrating Islam – that would be a totally different story and outcome.

There is no denigrating of Islam. All there is is the speaking of truth concerning it, repeating what Muslim imams and preachers say, repeating what the Koran and Hadiths say.

When that is spoken, Muslims, politicians, and the politically correct clergy who participate in inter-faith events, squawk about “denigration” of Islam. Islam, it seems, condemns itself.

A great step would be to eliminate student visas from Arab countries except for religious minorities (including certain Moslem minorities) who use them as a way to apply for asylum.

The universities would never stand for that.

Those people pay in cash.