Will Galway Univ. anti-Israel F-Bomber get away with shout down?

Will Galway Univ. anti-Israel F-Bomber get away with shout down?

University promises investigation and discipline, but will we ever find out? 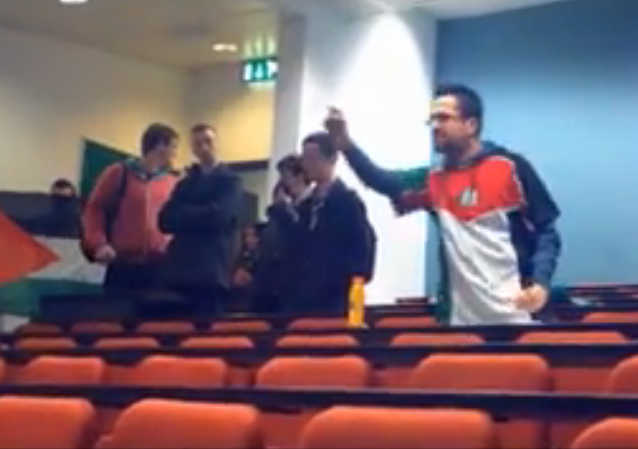 We previously reported on the profanity-laced shout-down of Professor Alan Johnson at National University of Ireland at Galway by anti-Israel activist Joseph Loughnane.

If you haven’t seen the video yet, watch it. It’s a microcosm of the culture of anti-Israel intimidation on many campuses, fostered by anti-Israel faculty propagandists pushing their policial agenda at places such as conferences run by NYU and the American Studies Assocation.

Professor Johnson, the subject of this abuse, has written a blog post about the incident and what he believes was behind it, BDS bullies at Galway University:

Third, ‘Israel’ and ‘Palestine’ have become tied up with the performance of political identity in the West in a most dangerous way. ‘The Palestinians’ are a stage on which the BDS activists act out their identity. To make that possible, ‘The Palestinians’ must be reduced to pure victims of the evil Nazi-Israelis. For only those kind of Palestinians can enable feelings of moral superiority, purity, quest, meaning, even transcendence of sorts. Palestinians being starved by Assad hold no interest. Palestinians being thrown from rooftops by Hamas members hold no interest. When Salam Fayyad is building up the Palestinian Nation the BDS activists just yawn, or denounce him as a collaborator. Only as agency-less pure victims can the Palestinians play their allotted role as a screen onto which the individual projects his or her identity of the righteous activist. It is the Palestinians misfortune that they have become this. 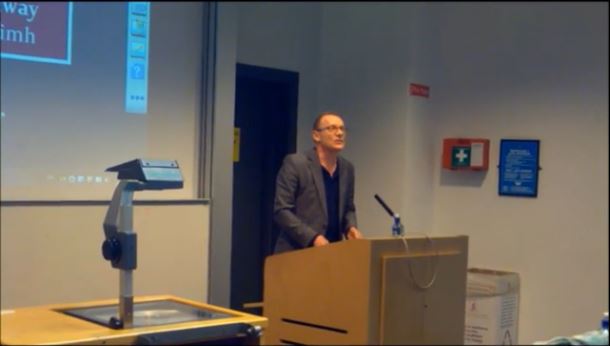 (Professor Alan Johnson being shouted down at NUIG-Galway)

As I previously reported, NUIG-Galway has promised an investigation and condemned the conduct.

In my follow-up, however, NUIG-Galway declined to provide details or even to commit to making the result public, although it did clarify its prior statement by adding that the investigation will include violations of the student code, as follows (in part):

“All students at NUI Galway are bound to act within the law and in accordance with the University’s code of conduct.

The behaviour portrayed in this video is unacceptable and has no place at any forum of discussion or debate.

This matter is being fully investigated under the University’s code of conduct and appropriate action will be taken.”

I had received reports via email that this was not the first time Loughnane has engaged in such conduct or had complaints made against him. When I asked NUIG-Galway for confirmation of those prior complaints, it declined:

“…. it is the University’s policy not to comment on any issue, disciplinary or other wise that relates to individual students”

I also pressed as to whether the results of the current investigation would be made public.

“Does this mean that the university never will announce the results of its investigation and what specific remedy is imposed on Loughnane?

Given the public nature of the conduct, does the university believe that the public has a right to know?”

The response was completely non-committal:

“The University’s position on the matter has not changed. The addition to the statement is the clarification that the matter will be investigated under the University’s code of conduct and appropriate action will be taken.”

I have received no response to my immediate follow-up:

“Just making sure I understand that the result will not be publicly disclosed?”

We will continue to monitor the situation, but it’s hard to do so from afar.

It may fall upon groups closer to NUIG-Galway to save the university from the infamy of this disgraceful conduct.

“Get the F*ck off OUR campus!”

Putting the zero-tolerance cult in multi-cultural.

LukeHandCool (who is unimpressed with leaders of trained clapping seal communities who strap on possessive adjectives and explode. But that’s what universities are these days)

I note again that the man who did the shoutdown, the Jew-hating, anti-Israel activist Joseph Loughnane, was a GRADUATED student of NUIG-Galway. He was not a present student, he was graduated and supposed to be out in the real world.

So why was he on campus? We all know why.

Why is he being accorded more rights than Professor Johnson? Sadly, we all know why.

“It may fall upon groups closer to NUIG-Galway to save the university from the infamy of this disgraceful conduct.”

I’m afraid you are right on this one Prof. Jacobson. I’m sure NUIG-Galway couldn’t care less about your concerns. Considering Loughnane’s long-term association with NUIG and his position in activist groups I am sure they know him well and have repeatedly ignored complaints against him in the past.

Thanks for you great work in not only exposing this type of vile activity but also for taking the fight to them and directly calling out those in positions of power to take a position rather than just rolling over.

Fighting words. Why didn’t someone in the audience take him out behind the woodshed?