Gee, I wonder why? 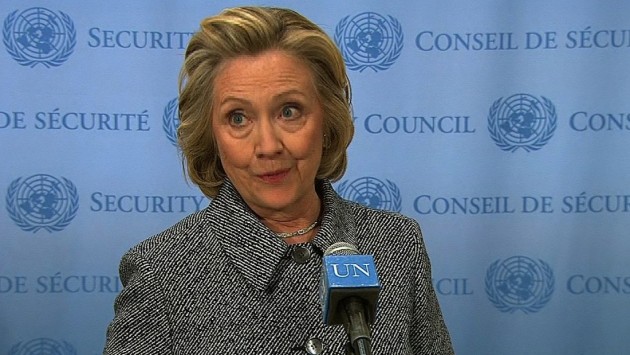 According to a series of recent (and not-so-recent) polls, Hillary’s support among women has been declining quite steadily as her unfavorables rise.  This is particularly true of the support of Democratic women and has the folks over at the Daily Beast scratching their heads.  Patricia Murphy writes:

Earlier this year Hillary Clinton seemed to have the female vote locked down, so why is she now having to work so hard to convince them to support with her campaign?

The Clinton campaign went into overdrive this week to shore up support among voters most assumed would have been locked in as Clinton backers from the start—Democratic women.

From last Saturday’s kickoff of “New Hampshire Women for Hillary,” to Clinton’s appearance on the Ellen DeGeneres Show last Thursday where she pitched, “If you vote for somebody on the merits, one of my merits is that I’m a woman,” to an online campaign store newly stocked with lady-friendly merch (official “Women’s Rights are Human Rights” tote, anyone?) the not-at-all subtle message is this: Hey ladies, vote for Hillary!

The female hard sell is coming as a series of local and national polls show that Clinton’s strength among Democratic women voters has continued to steadily, and in some cases, precipitously erode as her campaign has become bogged down in questions over use of a private email server and Sen. Bernie Sanders has risen on a wave of populist support that the Clinton camp had mostly dismissed or ignored.

There were warning signs of this loss of support among Democratic women back in June when a “women only” event was so ill-attended that they had to let (gasp!) men in to bulk up the numbers (and donations).

Part of the reason that women—including Democrats—are losing that loving feeling for Hillary has to do with things like her claiming, in practically the same breath, that she is both a progressive and a moderate.

Not only is the CNN panel laughing, but so are women across the country.

It doesn’t help that the word most closely associated with Hillary is “liar,” and it doesn’t help that she’s made a complete hash of the entire email scandal and looks . . . well, let’s just say, less than presidential as a result.

As CNN notes, women don’t respond well to her attempts to soft-pedal issues and dance around the facts:

A variety of studies have shown that women make decisions differently than men and perhaps are better at it. Do they tend to want to hear a case without a hard sell, offering full and open disclosure and then be left to decide for themselves what to do? That is precisely the opposite direction from which Clinton has headed in the past month, especially in her handling of the email story. Almost everyone is naturally mystified by aspects of that story, but women in particular may want a candidate to treat them with intellectual honesty.

Clinton’s eroding favor with women may also be tied up in their investment in her as standard bearer. Women I talk with of both parties definitely want to be a driving force in electing the first woman to the White House, but they also want the “right” woman — not a politician who happens to be a woman. A recent Quinnipiac poll showing that 57% of all voters believe that she is not honest and trustworthy, and a Fox poll finding that 58% think she is lying about the emails, should be setting off alarm bells at Clinton headquarters in Brooklyn.

One of her main problems, particularly with women, is that she’s so stilted and unlikable.  She has none of her husband’s charm, and when she tries to be charming, it’s a dismal disaster of overwrought fakery.  Remember this from 2008?

To be fair, this actually did work on Democratic women back then . . . just not enough.  But because it did result in a small bump for her among women voters, she’s trotting out the same theatrics this time around.

Women don’t trust Hillary, either.  They think she’s too moderate.  Or too progressive.  Or just too dishonest.  CNN reports:

Many liberal and progressive activists don’t trust Clinton because they think she sides with big banks and big money instead of the middle class and they’re wary of her on national security.

. . . .   “If there was an actual, authentic ‘I am going to listen to you about your issues’ from Clinton, instead of kind of pounding the drum of inevitability and stampeding over the left on her way to assumed victory, that would be effective,” said Sally Kohn, a progressive activist, CNN contributor and Clinton critic.

. . . .  “I don’t think she has been aggressive on the banks,” said Nelini Stamp, a progressive political organizer from New York. “When I think of Hillary Clinton, I actually think she is in bed with some of the banks and Wall Street is her ally.”

There is also an overarching suspicion among liberals that Clinton is saying what she needs to get elected, but would govern differently.

In short, Hillary doesn’t have whatever that thing was the Obama had: he could say he supports traditional marriage, is going to keep DADT in effect, etc. and etc., and progressives just “knew” that he didn’t mean it.  Hillary’s problem is that she says all the right things to the right people on the right day . . . and then changes in front of the next group and says what they want to hear.  No one knows what Hillary actually believes and that, coupled with the trust issues and general phoniness, has Democratic women (and men) searching for an alternative.

She’s not helped herself among women with several campaign stumbles, either.  Roping off the press and that disastrous book tour in which she announced that she and Bill were “dead broke” upon leaving the White House make her look like an out-of-touch amateur.

As Murphy notes, Democrats aren’t the only ones who are noticing the trend:

Clinton’s slide among her core constituency hasn’t gone unnoticed by her Republican rivals. “It appears that Democratic women are starting to trend the way of the larger electorate,” said Kellyanne Conway, a longtime Republican pollster who is working for the Ted Cruz campaign this cycle. “They don’t trust her, and they don’t see her projecting confidence in herself, in them, or in the future of the country.”

Conway said that from Republicans’ perspective, Clinton would need to outperform Barack Obama’s 56% showing among women voters in 2008 in order to win a general election contest in 2016. “Knowing that women will comprise a majority of the electorate and knowing that she will under-perform among men compared to President Obama and President Clinton, she needs to get closer to 58% to 60% among women and right now she is nowhere near that.”

Murphy expresses the concern not that these women will vote for a Republican but that they won’t vote at all.

It’s probably too much to hope that this move of Democratic women away from Hillary Clinton has anything to do with her initial campaign strategy of stressing that she should win because she’s a woman, but whatever the reason—and there are many—one thing is certain: Hillary is not inevitable.

Democrat women voters are abandoning satan’s spawn? Are we to believe that HRC is too evil for them… or not evil enough?

In general, Americans don’t like liars. Hellary IS a liar.

Even Collectivists don’t think that “being a woman” is NECESSARILY a “merit”. See Palin, Sarah.

While a lot of Collectivist women DO think that “being a woman is a merit” (an unabashedly sexist position), even they will recoil in the face of Clintonian industrial-level corruption COUPLED with artless mendacity (as opposed to Dollar Bill’s more charming mendacity).

The very few lefty women I know despise HRC. In one of the rare moments of clarity for them, they see what HRC really is.

That they cannot see the truth about their savior, Lord Obama, is puzzling. They see only what they want, nothing more.

But they do hate HRC.

Maybe … because … IT is not really a woman ?

Sorry. Sorry.
Could not help myself.
I will not do it again.
Sorry.

Women can see, just as well as men, what a horrible person and candidate Hillary Clinton is.

Hillary’s mixed messaging is due to her having wiped the server of her brain clean. Now she only operates off of RAM.

She lost me a long time ago – I was actually going to vote for Clinton as I was a registered Democrat (but didn’t really pay much attention to politics in those days) and then I heard this:

“You know, I’m not sitting here like some little woman standing by my man, like Tammy Wynette.” I began paying attention. And like most people who really start paying attention, I changed my whole political view.

Maybe the women she is turning off have LIDAR(Lying Imbecile Detection And Resolution. This is the same feeling women get when their husband has been either been screwing around or doing something equally stupid, they know BS when they hear it.

Just like the mambo, how low can you go.