“. . . and at moments, dragged behind an actual moving rope line” 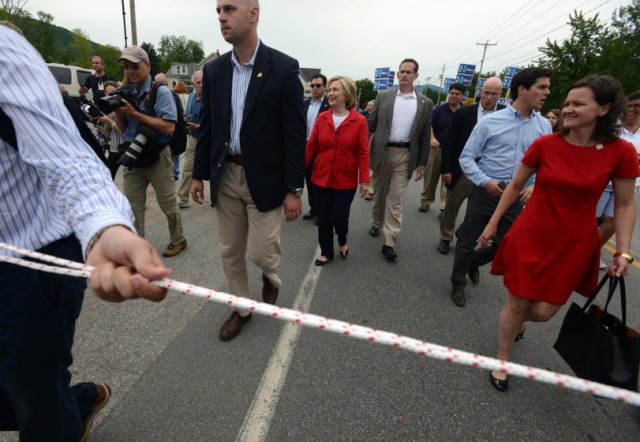 A professional campaign operative I know believes optics are extremely important when it comes to political candidates. Therefore, the optics of Hillary Clinton having her staff herd reporters behind a rope during a parade in New Hampshire certainly didn’t look all that great.

For the reporters who were there, the story became about being held behind ropes as Hillary walked the parade route:

At the Fourth of July parade Hillary Clinton marched in today in Gorham, New Hampshire, reporters following the candidate were kept — and at moments, dragged — behind an actual moving rope line.

The rope, which two Clinton staffers held on to on either side, was meant to give Clinton space as she walked down the parade route, but photos of reporters being dragged behind the rope as she marched have gone viral on Twitter.

They certainly did. Here are a couple of them:

Clinton advance aides create a rope line for the press, moving with the candidate pic.twitter.com/9S7CpVt7x4

So many people trying to get close to Hillary her aides are using a rope to keep press at distance pic.twitter.com/PkIl0Pez98

The New Hampshire GOP didn’t waste any time in calling attention to it:

“Hillary Clinton continues to demonstrate her obvious contempt and disdain for the Granite State’s style of grassroots campaigning,” New Hampshire Republican State Committee Chairman Jennifer Horn said in a statement. “The use of a rope line at a New Hampshire parade is a sad joke and insults the traditions of our first-in-the-nation primary.”

Hillary’s campaign responded to the criticism:  “While the GOP might want to spin a good yarn on this, let’s not get tied up in knots. We wanted to accommodate the press, allow (Clinton) greet voters (sic.) And allow the press to be right there in the parade with her, as opposed to preset locations.”

The problem is, as reported in the Washington Post, they were not “right there”:

Our colleague Philip Rucker reports that initially the press had been able to get close to Clinton and observe and listen as she chatted up voters. Then he said campaign aides unfurled a rope that stretched across the street, blocking access to the candidate. Rucker said they were kept 10 to 15 feet away from Clinton and could no longer hear what she was saying to people.

Hillary can afford to do this for now. She has a commanding lead over any other Democratic opponent, and even though general election polls at this point are pretty much useless, she is still showing ahead of any of her possible GOP opponents.

and these docile “journalists” LET them do it. Easy response? Don’t cover her events

Hillary’s treatment of the press *is* their story! Too Funny!

Hillary wouldn’t want anyone that wasn’t in their right mind to get close to her.

And who in their right mind would want to get close to her?

I’m surprised Hillary wasn’t carried in the parade in a chair carried on the shoulders of the peasants.

The same media has been furnishing the bearers up until now. They’re just mad they couldn’t do it this time

President Woodrow Wilson (D-NJ). Segregation is not humiliating, but a benefit, and ought to be so regarded by you gentlemen. If your organization goes out and tells the colored people of the country that it is a humiliation, they will so regard it, but if you do not tell them so, and regard it rather as a benefit, they will regard it the same. The only harm that will come will be if you cause them to think it is a humiliation.

Funny, but I thought someone in that crowd was going to suggest another use for that rope.

Did you see any of the members of our State-controlled press disagree or protest even slightly? Of course not. Being willingly exposed for the lackeys that they are is merely part of their services rendered to the regime.

This appears to be all the more reason to carry a serrated edge pocket knife that can be opened with one hand. If you have a legal right to be where you are standing, then stand.

Place a call to 911 and complain of unlawful detention, or perhaps “I’ve been tied up / bound by rope” …

This one was a moving Freedom of the Press Zone.

Hillary obviously is frightened out of her wits by the press to the point of hysteria.

That’s a good thing, but not for her. A one ring media circus, this is.

Gee, I wonder what flavor of ice cream she favors.

“Hillary Clinton is on the ropes today, pummeled by truth from all sides. Will she make it to the next round?” Howard Dontaskdonttell

Had a GOP candidate tried this, the press would have thrown off the rope, ignored the aides – they look like some of the unpaid interns Hillary prefers to paid staff – and approached the candidate until the Secret Service ordered them to get out of his pants pockets.

Just confirms what a pathetic, docile, and incurious bunch of hacks make up what passes for “press” these days.

No matter what the corrupt media tries, Clinton will be humiliated once again:

That’s another take on tying up Americans and rubbing their homes.

Or to paraphrase Joe Biden, ” democrats are gonna keep y’all in rope chains!”