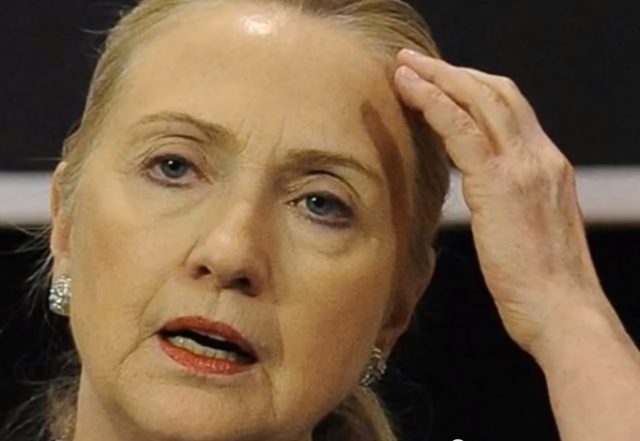 The Hillary-For-President bandwagon lost a couple of wheels over the last several weeks. Now another one is coming loose.

Sales of Hillary Rodham Clinton’s new memoir, “Hard Choices,” declined 43.5 percent to 48,000 copies in its second week on the shelves, according to Nielsen BookScan.

The sales figures put pressure on the publisher, Simon & Schuster, which paid Mrs. Clinton a multimillion-dollar advance to write about her time at the State Department and has invested heavily in the book’s rollout, one of the biggest of the year.

The second-week figures also increase the likelihood that Simon & Schuster will not sell enough books to make up for Mrs. Clinton’s advance, said a publishing executive who did not want to speak on the record about a competitor’s book.

Hopefully for the sake of her family’s financial struggles, Hillary was smart enough to bank the advance money.

The most helpful customer review was by TellsTheTruth calling the book –

A metaphor for HRC’s entire life.

– 5 beers or the full six-pack tonight?

– the red pants suit or the blue one? Which one hides my weight better?

Sales might have been better if it included THE YouTube video and was titled “Paper Tiger Diplomacy: The Three AM Phone Call from Benghazi”

The book would definitely make more money if they gave all the proceeds from the book sales to the poor guy who made THE YouTube video and whose life was almost totally demolished by the State Department liars. Maybe a lawsuit is in order.

Hillary Clinton sure is no Sarah Palin.

HAHA. That Amazon review is awesome!

And to think, she could have done a centerfold to boost sales.

Imagine… a naked HIllary with a staple through her belly button.

Yeah, I know…. now go visualize a half dozen hog butcherings to get that image out of your mind.

She is now #31 on the Amazon Top 100 list. But, not to worry: she gets to keep the $14 million advance and she is still getting a $225K speaking fee to help raise money for the UNLV Foundation.

Who knew that non-profits paid so well?

This is the feel-good story of the week.

Now the interesting question is, why is it so bad?

Poor, nearly broke, “not truly wealthy” Hill can obviously afford the slickest ghost writers on the market. Shoot, she can hire ten of them, and then give their output to one of the Clintons’ beloved “focus” groups to pick the best of the batch. So, why didn’t she?

Because she’s not terribly smart.

Bill was smart. Not one of the top three Presidents of the 20th century in the intellectual horsepower department, but still plenty smart. Bill’s problem wasn’t mediocre intelligence, it was immaturity. He never figured out how to use his gifts, and that’s part of what maturity is. He froze at about junior high school level. The Dems keep doing this to us; Obama, with at best a very pedestrian intellect, isn’t served well even by that, because his development froze at maybe senior high school level. And it shows in everything he does.

That’s not Hillary’s problem. She’s mature enough, but she just doesn’t seem to be very sharp. Unpleasant, thin-skinned, vicious, superficial, for sure; a witch in truly awful pants suits. But someone the Dems can sell as “the smartest woman in the room”? I doubt that even the Dems will be silly enough to try that angle this time around.

Her problem isn’t the ghost writers. It’s that even Tom Wolfe could not make her story interesting (at least, those parts of the story she is willing to share).

Now that’s a face only Ed Gein could love.

This picture is too funny.

And the irresistible juggernaut of Hillary the Inevitable rolls on, crushing all in its path without mercy.

She was also “inevitable” in 2008, as I recall. Now she has four years of Obama’s foreign policy disasters, with worse relations with nearly every nation in the world, to add to her resume as well as the blood of Benghazi.

Is it really an advance, or is it a bribe?

I can’t wait until we see them for sale at “Dollar General” and after that, used as bookshelf decoration in the IKEA showrooms.