Hillary contradicts herself as to who made decision on personal emails

Hillary contradicts herself as to who made decision on personal emails

At August 18 press conference said she made decision, in MSNBC interview today says lawyers did. 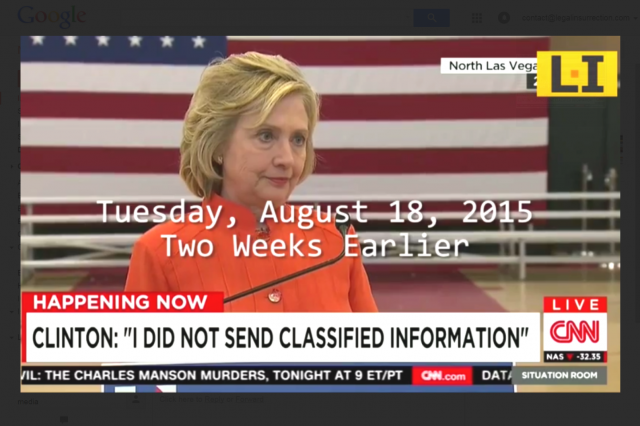 Hillary held a press conference on August 18, 2015, which was most memorable for her phrase “What, with a cloth or something?”, referring to the server being wiped clean.

But Hillary also told the media that she was the one who made the decision as to which emails were personal or or work-reladed. She was emphatic that she, as the official, made the decision:

We went through a painstaking process, so we turned over 55,000 pages of anything we thought could be work related. Under the law that decision was made by the official, I was the official. I made those decisions, and as I just said, over 1,200 of the emails have already been deemed not work related ….

Today, Hillary was interviewed by Andrea Mitchell. You can see the full 29 minute interview here, or the 12 minute excerpt as to the server at our earlier post today.

In the Mitchell interview, Hillary contradicted her prior claim that she made the decision what was personal, and said that her lawyers conducted that process for her and decided what to turn over to the State Department:

HILLARY: “And they [State Dept.] asked that we, all of us, go through our emails, to determine what was work-related and to provide that for them. The letter came to my lawyers, I asked my lawyers to please do that, and it took weeks, but they went through every …”

ANDREA MITCHELL: “So the lawyers went through it?”

HILLARY: Yes. Every single email. And they were overly inclusive, if they thought anything was connected, in fact so inclusive the State Department has already told us they’re going to return 1200 emails to us because they were totally personal….”

This is important because the 30,000 “personal” emails are gone, wiped clean, yet Hillary can’t even get straight who made the decision.

“I had no sexual relations with that woman.”

They’re going to “return” the personal emails to her? How do they do that? And why? Because they are her only copy????

That makes no sense. She’s a pretty comfortable liar, but she really needs to take a few more lessons from her husband.

See, this is why you just let liars lie under oath.

They can’t manage to keep the lies straight, no matter how clever they think they are.

Now there is NO doubt that Hellary is a big fat liar, the question becomes “Will Deemocrats care?”

Some will. Many won’t. Because, really, they’ve known for decades that Clintons lie and are crooks. It’s just who they are.

Tyrant Obama the Liar’s only skill is lying and the progressive fascists don’t care. I actually had a number of them claim the Obama didn’t lie when he promised that people would be able to keep their insurance. They stated that he didn’t know what was in the law as it was written by Congress! These people are so desperate to believe in their Dear Leader and their ideology they have to make up lies to maintain their belief.

Hoisted by her own petard.

She can’t help it. She’s old, and she don’t remember good no more.

“If I were to approach a person on the street and list off traits like “doesn’t drive,” “needs food prepared,” “needs help with the remote control,” “needs people to bring her beverages,” “has trouble remembering things,” and “doesn’t pay her own bills” about someone anonymously, he wouldn’t think I was referring to a current presidential front-runner in the year 2015. He would think I was referring to his poor nana, whom he had to place in a home because she wouldn’t stop yelling at the lamp and was at risk of accidentally microwaving her dentures. . . ”

I may be wrong, but doesn’t this mean that Hillary Clinton just confessed to violating 18 U.S. Code § 793? Now that we know classified information existed on the server, does David Kendall and his staff have the clearance to sort through those messages?

His law firm specialises in law involving classified information so he must have a clearance. However, I doubt that he is authorized to handle the email that contained the top secret information on her server. At least one of them was about NK nuclear matters and exposed how we were keeping track of them.

She also repeated that she had the server out of “convenience” but didn’t explain why this was convenient. She sounded very angry under her little girl voice – “I wasn’t thinking…” and ten to one the Republicans will use this clip for ads.

Hillary contradicted her prior claim that she made the decision what was personal, and said that her lawyers conducted that process for her and decided what to turn over to the State Department

This isn’t really contradictory. It’d be like Harry Truman saying he’d decided to drop an atomic bomb on Japan, but later saying that some Army Air Corps guys had actually done it.

She’s committed enough real crimes; we don’t have to make any up.

Did ANYBODY seriously believe that Hillary sat down one afternoon and read through 60,000 emails, sorting them into ‘business’ and ‘personal’ stacks?

She’s not under oath, so she can lie all she wants.

Not that being under oath would make a difference, I’m just sayin’…

When an iceberg strays into warmer waters, its bottom-most ice, under the warm water, begins to melt off, while rain and/or snow falling on top aggregates. The iceberg slowly becomes top heavy, and will eventually topple.

This is how I see Hillary Clinton at present – a stray iceberg just about to roll over from the weight of its own processes.

Sounds to me like the FBI needs to raid David Kendall’s office and make some arrests. Let’s see if this happens.

Apparently, at least according to one source, Kendall and one of his attorneys had been given security clearances in order to review Hillary’s emails. But, this may not be as useful to them as they originally thought – they likely did not have a high enough clearance to review some of the emails (such as the interpretation of satellite imagery, etc.) And, there appears to be nowhere in the law that would authorize them to hold a copy of all of her emails (or, all of her work-related emails) on a flash drive, or actually anywhere at their office.

The original story had been that they had used search strings, etc. to identify work related emails. And, one of the problems there is that such a procedure is likely to (intentionally) have been under-inclusive. But that would have meant that they ultimately deleted emails containing classified information, which argues that they were not operating off of the flash drive.

Could this be a way to break the lawyer client relationship? As Hillary committed a crime by providing classified information to her lawyers?

There is, in some states, an exception to the attorney client privilege in the case of crimes. I’m not sure how the issue would be decided in New York.

You can get retroactive clearance for something assuming you meet the requirements. With TS the requirements are really steep. I suspect there are a number of people who have access or actual possession of the TS material that do not have either a need to know or clearance.

A woman I know lost her job because the customer lost a secret slide out of about three hundred for a presentation. She found it later where it had slipped behind her desk but she blamed the clerk for it and the clerk was fired. For one slide out of hundreds and she was not hired back. The customer had signed for the package and everything.

If one person can get fired for doing nothing Hillary should be able to go to jail for what she did.