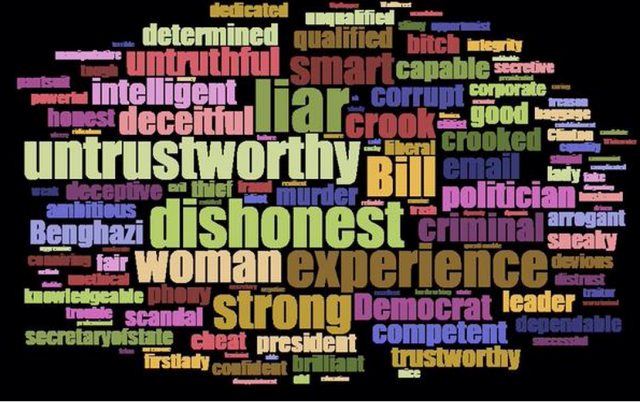 Quinnipiac University released a new poll today showing a slight shift in the way Democrats perceive their potential field of candidates. The numbers also indicate that those surveyed on the Republican end still crave candidates who by their nature are separated from “business as usual” in Washington.

Vice President Joseph Biden runs slightly better than former Secretary of State Hillary Clinton against leading Republican contenders in the 2016 presidential sweepstakes, and has the best favorability rating among top Republican and Democratic candidates, according to a Quinnipiac University National poll released today.

Donald Trump leads the crowded Republican pack with 28 percent, up from 20 percent in a July 30 national survey by the independent Quinnipiac (KWIN-uh-pe-ack) University. This is the highest tally and widest margin for any Republican so far in this election. Ben Carson has 12 percent, with 7 percent each for former Florida Gov. Jeb Bush, U.S. Sen. Ted Cruz of Texas and U.S. Sen. Marco Rubio of Florida. No other Republican tops 6 percent and 11 percent are undecided.

Trump also tops the “no way” list as 26 percent of Republican voters say they would definitely not support him. Bush is next with 18 percent.

Clinton leads the Democratic field with 45 percent, down from 55 percent July 30, with U.S. Sen. Bernie Sanders of Vermont at 22 percent and Biden at 18 percent. No other candidate tops 1 percent with 11 percent undecided. This is Sanders’ highest tally and closest margin.

Clinton tops the Democrats’ “no way” list with 11 percent.

Biden rising, Clinton down, and a whole lot of love/hate for Trump. Sounds like business as usual. The people at Quinnipiac must have sensed that, because the second chunk of their data has proven a source of endless entertainment. Pollsters asked their sample to evaluate the field based on the first word that came to mind when they thought of a particular candidate.

The three most common words used to describe Clinton? “Liar,” “dishonest,” and “untrustworthy.” Also making appearances were “criminal,” “crook,” and the B-word: 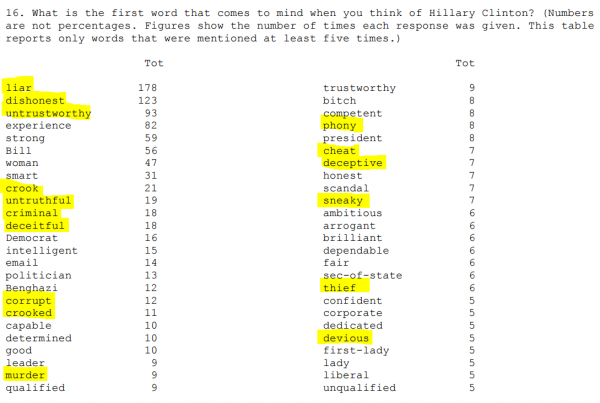 It appears as though those polled believe Donald Trump is an arrogant, blowhard clown…but judging by what else popped up in the results, that may not be a bad thing: 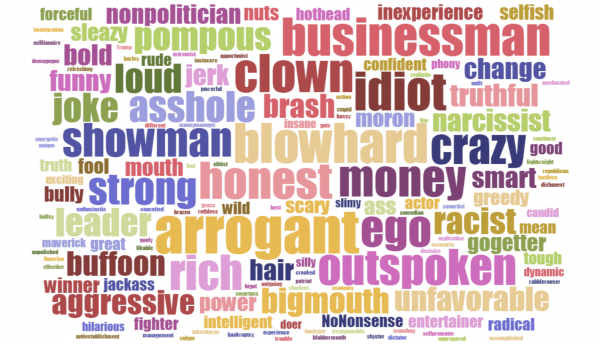 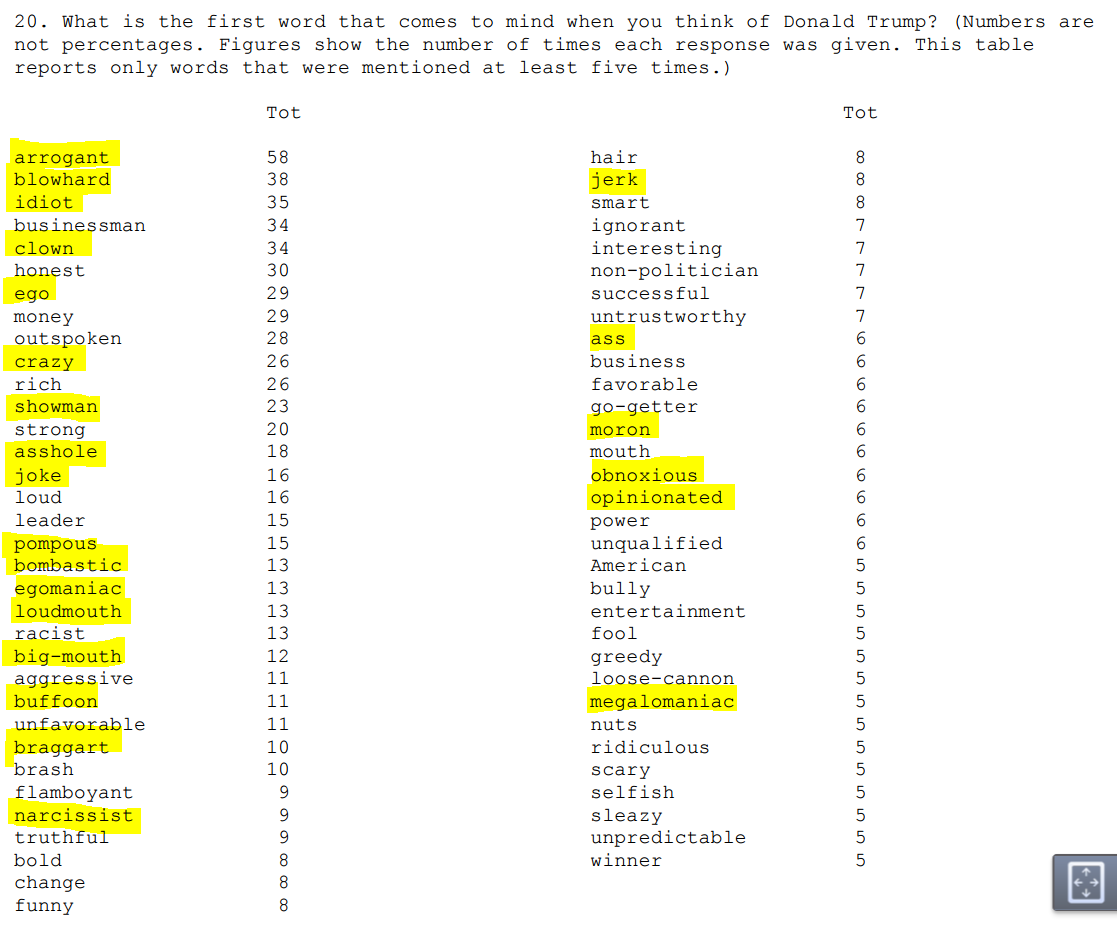 He fields a lot of hyperbole, but by and large, is still perceived as honest. “Businessman” ranks highly with him, far above accusations of racism or overall sleaziness.

Jeb’s results were (not surprisingly) more toned-down than either Clinton’s or Trump’s: 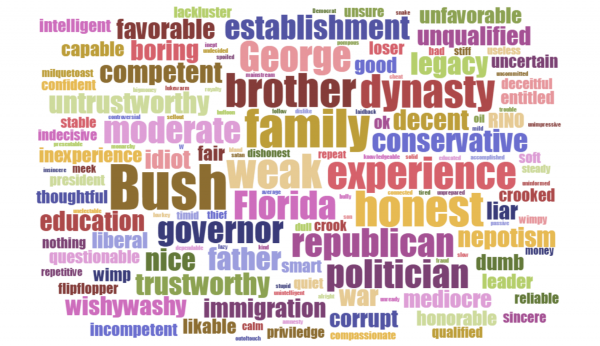 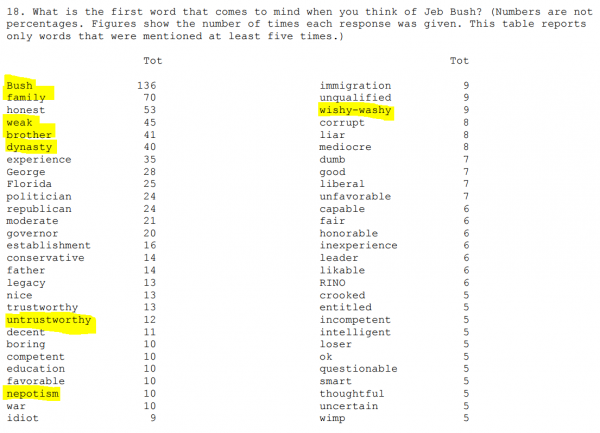 Those polled recognize the dynasty, but don’t believe that makes Jeb particularly dishonest or corrupt. His campaign should worry about “weak” appearing so high in the list—especially in the wake of a messaging pivot meant to portray him as a leader.

Does this tell us anything we don’t already know? Maybe, when it comes to Hillary. Registered voters all across the country overwhelmingly perceive her as dishonest—not just Republicans.

Will this affect how much further she rises before fizzling out? We shall see; but for now, we can work off of the knowledge that Americans by and large know that she’s a problematic candidate. We just have to make them care enough to do something about it.

But not Democrat? Those are all synonyms for Democrat.

I would have thought “cankles” might have scored better . . .