No, Nancy Reagan did not endorse Hillary Clinton 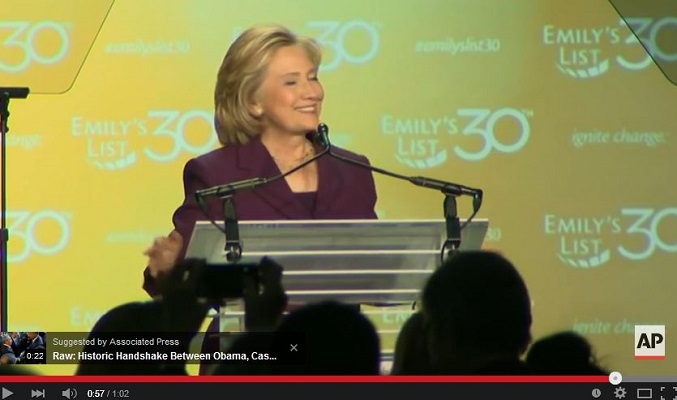 Hillary Clinton has a number of hills to climb and unflattering revelations about her character to overcome, but one of the most problematic things that she faces is that no one can seem to name even one accomplishment from her time at State or even from her time in the Senate.  And by “no one” I don’t mean republicans, libertarians, or anyone lurking in the darkened corners of the vast right-wing conspiracy, I mean attendees of the Democratic National Convention:

The folks at Morning Joe can’t think of anything, either:

Without anything of any substance to run on, Clinton’s team has landed on her one achievement, her one accomplishment that matters most to Democrats: she’s a woman.

Millennials are apparently very impressed by Clinton’s amazing ability to . . . be a woman, a stunning and admirable skill that only 150 million or so other Americans have mastered:

How desperate are left-leaning “journalists” to find something, anything positive to say about Hillary Clinton’s soon-to-be-announced candidacy and her clear intention to focus on her gender as her winning strategy?  Apparently, so desperate that they will publish as fact a “story” from an Onion-like satire site.  Mediaite reports:

The National Report made up a story about an upcoming History Channel series hosted by Ron Reagan Jr. in which his mother, Nancy Reagan, said that she backs Hillary Clinton in 2016. They “quote” her as saying this, “The time for a woman to serve as our President has come – really, now is the time – and I think the idea of having a former First Lady as the leader of the free world is really quite a marvelous notion. I want Hillary to win. Even though I admire two of the current potential Republican nominees, I have no interest in seeing either of them lead this country.”

Yes, that’s right.  Nancy Reagan, widow of conservative powerhouse and beloved president, Ronald Reagan, supports Hillary Clinton for one reason and one reason only: she’s a woman.   Nothing else matters to Nancy Reagan, not policy, not ideology, not politics, not scandals, not character, nothing is more important than Hillary Clinton’s gender.  The left is so awash in its own mythology, so enamored of its own identity politics, and so sure of the Clinton gender angle that this clearly fantastical notion is not only believable to them but worth reporting as a news story.

Bloomberg Politics jumped on the “story,” even quoting one of its least believable, most laughable paragraphs:

Ron Reagan said that he sees his mother’s endorsement of Hillary Clinton as evidence of the public’s lack of knowledge about Mrs. Reagan.

“She wants people to know that the First Ladies are tight,” said Reagan fils. “They get together once a year to support each other. In fact, Hillary had no interest in running until both Laura and Barbara Bush cornered her at their get-together in May 2013 and talked her into at least thinking about it! So, in a sense, if Mrs. Clinton does run and win, you can blame the Bush family.”

Bloomberg Politics has since removed the post, but the internet never forgets. You can read the Bloomberg “report” here.

Why was Bloomberg taken in by something that any conservative, even a moderate, would easily spot as satire?  We can only guess, but my guess is that it has to do with their belief in the viability and bipartisan appeal of Clinton’s “I have lady parts” presidential campaign.

Lack of accomplishment did not stop Barack Obama from winning the presidency. In his case, he was endorsed by many, many talking heads who had never even met him.

If the Democrats do not have a candidate, they will simply make one up.

I think “from stealing.”

The science is settled.

Stoopid is as stoopid does, stoopid.

You do understand it takes a real moronic jerk to make a blank statement demeaning all Democrats the way you have, or are such a nitwit you can’t understand how asinine that is?

J, honeee, if you’re going to read this site, you need at least a marginally functioning sense of humor.

I suggest you try Craig’sList first in your local area. They aren’t expensive…

The voters of New York liked her. The liked her so much after her first term, they voted her in over her Republican challenger 64% to 34%. And she enjoyed high approval ratings as Senator, even after campaigning for President against Obama in her second term.

Her Republican counterparts in the Senate also liked her more then less: her method was to reach out to others in bipartisan fashion. Even Newt Gingrich got along with her, behind the scenes.

And as to accomplishments, which of the current Republican wanna-be presidents has accomplished anything memorable on the national scene? Oh right, Ted Cruz helped shut down the government in 2013, though I don’t think that’s going to be in his campaign literature.

“And as to accomplishments, which of the current Republican wanna-be presidents has accomplished anything memorable on the national scene?”

Well, if you had any…ANY…intellectual integrity, you would have researched that.

But you haven’t. IF you had, you’d know how vacant your jibes.

The “voters” in New York liking someone virtually assures their doooooom as national candidates, and certainly NOT many voters outside the city liked her. She lied to them, didn’t she, moron?

You questioning my integrity is like a pickpocket complaining a wallet he just stole is only filled with dollar bills.

There’s a quote from Albert Einstein that fits you perfectly:

Why would anyone take a name-calling false-witness like you seriously on any subject.

We see you…again…going on a personal attack rather than doing any research or trying to substantiate your bullshit.

If you’re smart, you’ll just let this be the end of my demonstration.

There’s a quote from Albert Einstein that fits you perfectly:

You should watch the movie “Gifted Hands” The Ben Carson Story”. He has helped the whole world. If he is smart enough and talented enough to figure out how to separate conjoined twins at the head, he can certainly figure out how to put America back together again, after Humpty Dumpty is finished breaking it.

But,I really don’t believe we have fair elections anymore, if we ever did. I believe a small group, so high up no one can see them, decide who’s going to win ahead of the elections. I know conservatives don’t want Jeb Bush, but I think he will win because it will be easy for Hillary to win then.

Cruz seved as a Director of the FCC and has argued nine cases before SCOTUS. As far as that debilitating “shutdown” goes, you prog drones should really figure out which OFA turd you are going to polish. Your little boy barry sure likes to brag about the deficit reduction Cruz forced on him.

I am a female Baby Boomer from New York and a registered Independent. I didn’t vote for her for Senate either time.

The reason I will never vote for her? Mrs. Clinton hired Washington DC private investigator Terry Lenzner to go after all of the poor woman her husband, Bill Clinton, groped.

Mrs. Clinton is NO friend to women. She is anti-woman.

Kirsten Gillebrand got re-elected twice and I don’t think anyone can claim that anybody thinks she’s doing a good job, or any kind of job at all, besides playing politics.

Has anyone notice the hard-hitting hagiography that NPR just did as a ‘news’ article about dear Hillary?

It looked like NPR’s been rummaging through the reject bins at Cosmopolitan.

NPR and PBS are just two other names for “Democrat Party!”

After the 1992 election, Bill Clinton tried to claim that Ronald Reagan had voted for him.

….”Remember when Clinton stopped to see Reagan and got those jelly beans; how friendly they were?” Ms. Murphy reported the staffer had said to her. “Well, Reagan voted for Clinton.”

In a statement issued through his Los Angeles office yesterday, Mr. Reagan denounced the report saying: “After more than 80 years on this earth and several decades in public life, I thought I’d heard everything. But this week’s TV Guide story ranks up there with the worst of them.”

“To put an end to such nonsense, I’ll spell it out for you once and for all,” the statement continued. “I actively campaigned, and energetically supported George Bush in the November election, and I proudly cast my vote for him.”

Heather Borden, a spokeswoman for TV Guide, said the magazine stood by its account, but intended to print a letter of rebuttal in the Jan. 16 issue from Frederick J. Ryan Jr., Mr. Reagan’s chief of staff.

I don’t find it at all surprising that a serial rapist like Bill Clinton is also a bald faced liar. But hey, those are both resume-enhancing traits in progville, amiright?