Walking While Jewish in … Cairo

Walking While Jewish in … Cairo 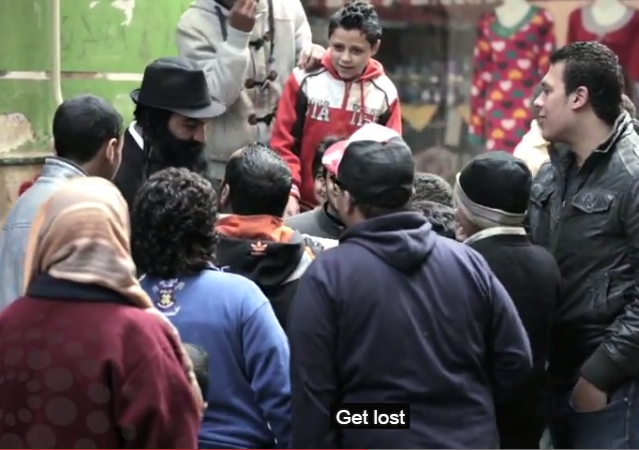 Is this officially a series now?

We also did Montevideo, where the reaction was positive.

An Egyptian journalist conducted an experiment in which he dressed up as a Jew and asked passersby on the streets of Cairo for directions to a nearby synagogue – with nearly serious consequences for his physical safety.

The Cairo-based Internet news site DOTMSR sent the journalist to the streets of Cairo dressed in overtly Hassidic garb – sidecurls, skullcap, beard, and a hat.

The “Jewish” journalist was then subjected to threats of violence, epithets, slurs, and shoving from hostile locals….

It describes itself as a news outlet that “believes in openness, innovation, and an obligation to accepting those who are different.”

The video seems highly edited, so it’s hard to get a sense if the harassment was as pervasive as in European cities.

Regardless, Walking While Jewish remains risky in many places in the world.

With Obama in office there will be no denouncemen of radical Islam. Obama is nominal Muslim, to be sure. His true religion is ‘can’t be bothered’ materialism.

To say, at the same time as beheadings, that global warming is mankind’s greatest threat is naive and stupid. He must be surrounded by idiots.

The lie that is multiculteralism and diversity, society’s religion of scientism, will be with us until we return to the acknowledgedment of first century AD and the Ressurection of Jeses Christ.

“Naive and stupid” is one interpretation. I prefer a different one: evil totalitarians.

Oops, someone interupted me at Maggianos.
Shoudl say, “Jesus Christ”, but you knew that.

I need new mobile technology. I should be able to eat Chicken Piccata w/o mistyping everything.