Don’t even try Walking While Jewish in Malmö, Sweden, or many other cities in Europe. 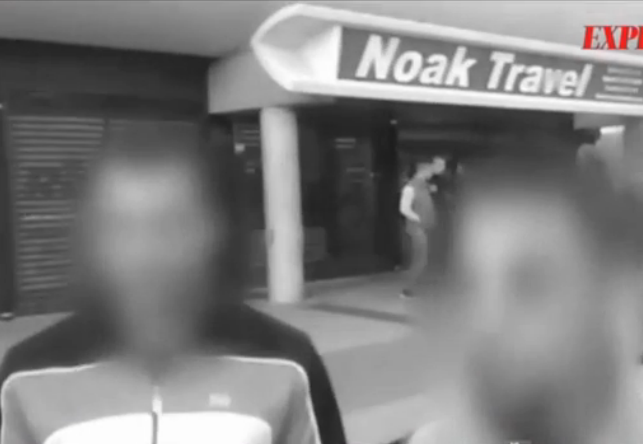 A three-day long controversy broke out recently over the use of the term “No-Go Zones” with regard to certain European cities in light of the Charlie Hebdo and HyperCasher supermarket attacks by Islamic radicals.

Steve Emerson of The Investigative Project, a longtime expert on terrorism and its connection to Islamist radicals, made a misstep when he overstated the case while appearing on Fox News.  That created a near-perfect storm of groups just waiting to jump all over him: Fox News haters like the NY Times (even though it previously used the term) and the liberal entertainment media; British and European politicians who prefer not to deal with the sources and implications of domestic terror; and groups that have made professions of tarring people with the Islamophobia epithet.

Emerson handed it all to them on a silver platter, as Theodore Dalrymple at City Journal explains:

Steven Emerson, the expert on terrorism, has caused a sigh of relief among the bien pensants of the Western world. By making inaccurate and false claims on Fox News, he has enabled them to pour righteous scorn on him and thereby avoid thinking about uncomfortable social realities.

A defense of Emerson’s basic point, if not his specific description, is provided by the Gatestone Institute, European ‘No-Go’ Zones: Fact or Fiction? Part 1, France. (added) See also, Jonathan Tobin, ‘No-Go Zones’ Are Not a Conservative Meme.

Regardless of whether “No-Go Zone” is a proper term in a general way, there is no doubt that there are cities and sections of many cities in Europe which are no-go zones for those publicly identifying as Jewish by dress (e.g., wearing a kippah/yarmulke) or symbols (e.g. wearing a Star of David) or appearance (e.g., long beard in combination with dress and symbols).

We have explored the problem of Walking While Jewish repeatedly over the years, including recently regarding “Kippah Walks” in placed like Copenhagen to protest harassment of Jews on the street, frequently by groups of Muslim young men.

Though it’s not only men, as this woman in Copenhagen demonstrated with her Heil Hitler shout when she spotted Jews at a restaurant: 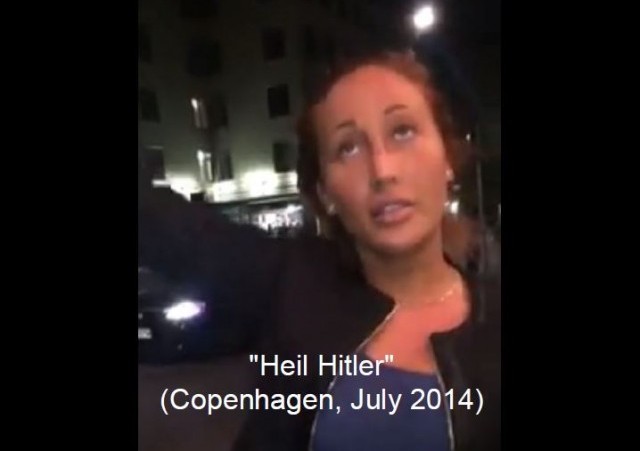 The harassment and attacks on Jews in Europe go hand-in-hand with the rise of the anti-Israel Boycott, Divest and Sanctions movement, whose banners and shirts accompanied anti-Jewish attacks in Paris this summer.

One place we have focused on for several years is Malmö, Sweden, because the situation there brought together the worst of Islamist Jew-harassment and Leftist political indifference if not encouragement: 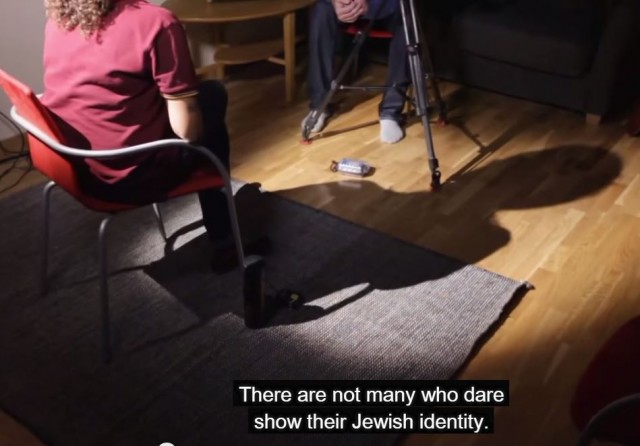 That Malmö has become a No-Jew-Go Zone is demonstrated in the video below by a non-Jewish Swedish reporter who put on a Kippah and walked the streets, thereby experiencing the harassment, name-calling and threats that come with walking while Jewish.

The original article in Swedish is here (translation by Elder of Ziyon):

Our mission was to spend a week in Sweden’s third largest city, dressed with Jewish symbols. On his head reporter Petter Ljunggren wore a kipah. Around his and his colleague True Klinghoffers necks were hanging Stars of David.

The reporters are usually treated kindly, but every now and then, a look, a comment or a solicitation to leave the area. The worst comes on the outskirts of the city, and in some places the reporters have been warned to stay away. In Lindängen center they are called “fucking Jew swine” from a person. Another man stops – almost shocked – when he sees the reporters with a kipah and Star of David.

Here is a clip from the video (click image for video – no translation needed) (full video with computer generated captions at bottom of post): 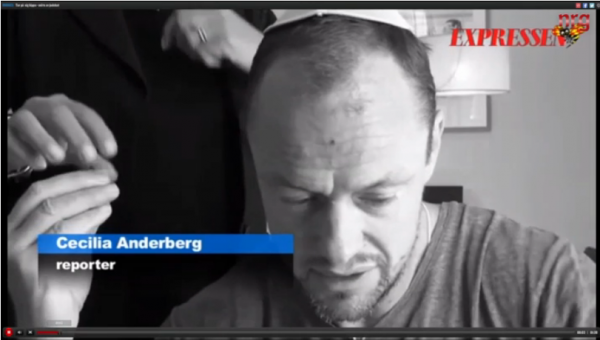 John Howard Griffin famously enlisted the assistance of a dermatologist to have his skin darkened so he could pass as a black man traveling in the deep South for six weeks in late 1959. He reported his experiences in Black Like Me. Based on the journal he kept, the book has sold more than 10 million copies and remained continuously in print since its publication in 1961.

Swedish journalist Petter Ljunggren had a similar idea, though he didn’t have to go to Griffin’s lengths to conduct the experiment. Replicating the experiment conducted by journalist Patrick Reilly in October 2013, Ljunggren donned a kippah and a Star of David to walk the streets of Malmö, Sweden, with its large Muslim population. Captured with a hidden camera, the experience depicted is not horrible, but rather unpleasant and threatening (at 17:50 and 29:30 or so in the video below).

The Algemeiner reports on the results of the experiment here. Elder of Ziyon follows up here.

JTA via Times of Israel provides more explanation of the video content:

In one scene, Ljunggren — who, in addition to wearing a kippah was also wearing Star of David pendant — was filmed sitting at a café in central Malmo reading a newspaper, as several passersby hurled anti-Semitic insults at him.

Elsewhere, one person hit his arm, the reporter said on camera, though this was not recorded. One of the people who cursed Ljunggren called him a “Jewish devil,” “Jewish shit” and another told him to “get out.”

One person on a scooter approached Ljunggren to warn him to leave for his own safety. In the heavily Muslim Rosengard neighborhood, Ljunggren was surrounded by a dozen men who shouted anti-Semitic slogans as eggs were hurled at his direction from apartments overhead. He then fled the area….

Dozens of anti-Semitic incidents are recorded annually in Malmo, a city where first- and second- generation immigrants from the Middle East make up one third of a population of roughly 300,000. Several hundred Jews live there.

Fred Kahn, a leader of the local Jewish community, told JTA that most incidents are perpetrated by Muslims or Arabs

There are No-Jew-Go Zones in Europe.

What the Europeans fail to realize is that the Jews are their canary in the coal mine – today the Jews, tomorrow the rest of them. Left alone, the anti-semitism will metastasize into full-fledged hatred of all things Western. They will convert to Islam or die. Unfortunately, all too many of them are quite happy to commit cultural suicide. And that same poisonous attitude is spreading here as well, I fear ~

Emerson is a fool. He made the best PR radical Islam could have hoped for.

Fool? Look in the mirror.

People have a deep-seated need to consider those like Hitler, Stalin, Mao, Pol Pot, and Saddam as aberrations, as evil incarnate, something outside normal human experience. This is because we want to believe humans are basically good – because that means WE are basically good.

But the truth is that the biggest difference between those biggest mass murderers in history and your average, garden variety neighborhood psychopath is mainly opportunity. They were all the ultimate power in their countries, the local guys have to worry about being caught.

Yet the level of depravity seen in some “local” murders and assaults is no less than that of the most notorious. People are tortured, even burned alive, for no reason other than the killer wants to do it.

The difference between Us and Them is far smaller than is comfortable to admit. We are all vile sinners, only some of us have greater self control, usually by the Grace of God.

Of course there are no “official” No-Go zones in France or anywhere else in Europe. But there are areas the cops and firemen don’t respond at night, or even at all. And the recent exposure of the child-rape-enslavement ring in an entire English city, Rotherham, that was known and tolerated by civil authorities shows there is no limit to the power of certain groups in “their” neighborhoods.

To pretend otherwise is simply delusional.

I suppose that when the French tourism authorities advise visitors to stay away from certain areas, it’s just a joke.

A person who exercises self-control is not a sinner, but a saint.

There are official no go zones in France. They are called “sensitive zones” All a matter of semantics and the Left is master at that deception.

You comment is one of the best. You stated the EXTREMELY uncomfortable truth about the nature of fallen man, and you did it with no gratuitous hyperbole. Kudos.

Make no mistake about it – the world has a sin problem. It is actually one single problem expressed via several billion sinners. Which is why the sacrifice of one perfect Man was sufficient to forgive the world. One for one, and only He could do it.

Having said that, if there’s any part of this situation that is a joke it sure isn’t funny.

“But the truth is that the biggest difference between those biggest mass murderers in history and your average, garden variety neighborhood psychopath is mainly opportunity.”

Excellent point. Just look at the former Yugoslavia and the horrors committed there. Neighbors who lived next to each other for 30 years killing each other. Or better to say, one neighbor slaughtering the other.

The persistence of this virulent anti-Semitism, so soon after the horrors of the Holocaust, breaks my heart and really makes me despair for our future.

Paris has been having carbeques for years. Muslims get together and set cars on fire. This cannot happens unless there are “no-go zones” where the police fail to react. The French solution has been to fail to report on them, in an effort to discourage them.

Not just Paris. It has happened in lots of French cities and big towns.

That’s a pretty good round-up of sources showing the extent of the problem.