Walking While Jewish in Paris

Walking While Jewish in Paris

There doesn’t seem to be much Viva in some parts of La France. 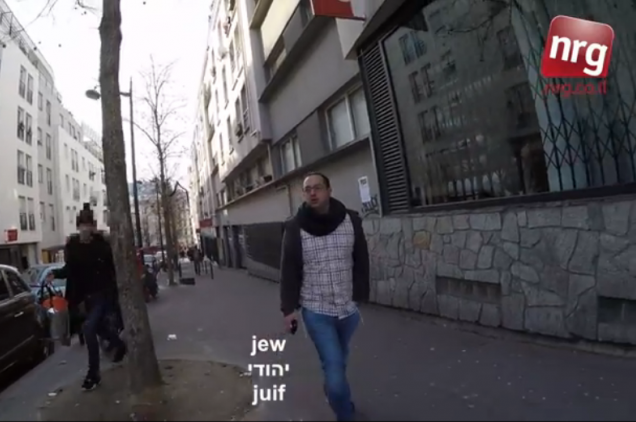 “Walking while Jewish” is a phrase I have been using quite a bit lately, when it comes to the rise of anti-Semitic street harassment and violence in Europe, often masquerading as anti-Zionism and frequently by Muslim young men.

A Swedish reporter made a film recently of how he was harassed in Malmö, Sweden, while walking with a Kippa (Yarmoulke), and we have discussed Kippah Walks to protest street harassment in Copenhagen.

An Israeli film crew from NRG news produced a video 10 Hours of Walking in Paris as a Jew (embedded below).

“Go f*** from the front and the back,” “Viva Palestine,” “Hey you, with the kippa, what are you doing here?” these were only a few of the remarks sent my way as I was walking through the streets of Paris wearing a tzitzit and a kippa.

Welcome to Paris 2015, where soldiers are walking every street that houses a Jewish institution, and where keffiyeh-wearing men and veiled women speak Arabic on every street corner. Walking down one Parisian suburb, I was asked what I doing there. In modern-day Paris, you see, Jews are barred from entering certain areas.

About six months ago, New Yorker Shoshana Roberts uploaded a video to YouTube in which she documented the sexist remarks and harassment she suffered during 10 hours of walking down the streets of the Big Apple. After the Jan. 9 attack on a kosher supermarket in Paris, where four people were murdered for the sole reason of being Jewish, we decided to see what it was like for a Jew living in the City of Lights.

For 10 hours I quietly walked down the streets and suburbs of Paris, with photographer Dov Belhassen documenting the day using a GoPro camera hidden in his backpack. Given the tensions in Paris, which is still reeling from a wave of terrorist attacks (including the murder of Charlie Hebdo magazine journalists), I was assigned a bodyguard.

Areas known as tourist attractions were relatively calm, but the further from them we walked, the more anxious I became over the hateful stares, the belligerent remarks, and the hostile body language….

Walking into a public housing neighborhood, we came across a little boy and his hijab-clad mother, who were clearly shocked to see us. “What is he doing here Mommy? Doesn’t he know he will be killed?” the boy asked.

Walking by a school in one of Paris’ neighborhoods, a boy shouted “Viva Palestine” at me. Moments later, passing by a group of teens, one of the girls remarked, “Look at that – it’s the first time I’ve ever seen such a thing.”

Walking down another neighborhood, a driver stopped his car and approached us. “We’ve been made,” I thought. “What are you doing here?” he asked. “We’ve had reports that you were walking around our neighborhood – you’re not from around here.”

In one of the mostly-Muslim neighborhoods, we walked into an enclosed marketplace. “Look at him! He should be ashamed of himself. What is he doing walking in here wearing a kippa?!” one Muslim merchant yelled. “What do you care? He can do whatever he wants,” another, seemingly unfazed merchant, answered. Over at a nearby street I was lambasted with expletives, mostly telling me to “go f*** from the front and the back.” …

I would say Viva La France. But it seems like France has died more than a little.

But remember, there are no “no-go” zones in Paris.

(Unless you’re a Jew with a death wish.)

“(Unless you’re a Jew with a death wish.)”
Sounds like the “Liberal” Jews in the US.

Across the Western world…
Even in the highest institutions of education…
An old evil is growing.
We are reliving the early 1930s.
The parallels are stunning.

“Juden raus!”
How long before journalists and newscasters openly proclaim the words? How long before NOT agreeing may cost you your livelihood, your freedom or perhaps even your life?

Meanwhile, Muslims (and their leftist allies) are hyperventilating over how very very scary it is to be a Muslim, because the “Islamophobia” is going to get really serious any day now.

I wonder how an identifiable Christian, like a priest or nun, would fare? Perhaps marginally better…for now.

This is horrible, of course.

Walk him through downtown Detroit or St. Louis and see what happens. They won’t recognize the yarmulke as such, but instead will bark at him or worse – far worse – based on skin color.

Political advancement via division and targeting of social and religious groups is a progressive hallmark, but are ultimately deleterious to the host country employing it.

We may say goodbye to their ‘western-style’ governments, but we will be saying ‘hello’ to their sophisticated nuclear weapons – thanks to the new inhabitants.

Chicago is another example. If I as a white male were to walk into either the Garfield Park or Englewood neighborhoods, I’d be lucky if the police stopped me and escorted me out. Otherwise, forget racial comments, I’d likely be robbed and shot… Imagine if the races were reversed. It would be front page news. The same applies to Muslim majority neighborhoods in France. If it were a Muslim that had to worry, it would be news. A Jew, not so much. Sad commentary on the world we live in today.

I wish I’d gone with my friends that summer almost four decades ago.

Rule of thumb: I have no interest, for a number of reasons, not least of which is personal safety, visiting or living in a place where Jews are not welcome.

I always wanted to do a lot of international travelling once the kids were grown up and we could afford it.

But my travel world is shrinking.

I can only imagine how Jews feel.

Sweden should swiftly expel any Muslim who refuses to assimilate and embrace Swedish values. Treat them as vicious animals.

The Swedes are too soft.