Walking While Jewish In Montevideo

Walking While Jewish In Montevideo

You’ll never guess what happened to this Orthodox Rabbi. 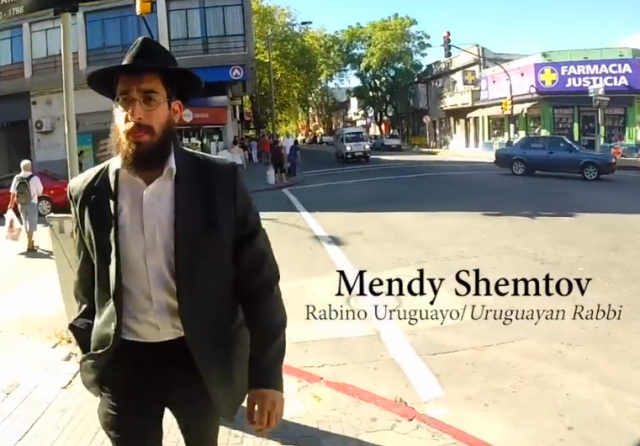 We’ve featured many videos of the street harassment that accompanies Walking While Jewish in many European cities, including Paris, Copenhagen, Malmö and parts of Britain.

So here is a change of pace.

Chabad, the Lubavitch Orthodox Jewish organization, has emissaries and houses on campuses and locations around the world. It is not a proselytizing group. It doesn’t seek to convert anyone, focusing instead on bringing Judaism to Jews.

“Everything in this world was created for a divine purpose. All forms of modern technology can and should be harnessed to make the world a better place and, in the case of Jews, to spread Judaism in the widest possible manner.” as quoted in The New York Times

“No Jew should ever be lost to the Jewish people, no Jew must ever be lonely.” as quoted in The Jewish Week

The campus Chabads are particularly fantastic, in my experience. Non-judgmental, welcoming, and enthusiastic (that’s an understatement). Major shout out to the folks at Cornell Chabad and the recently opened Chabad of Clinton (NY), servicing my alma mater, Hamilton College.

Chabad produced a video of one of its Rabbis spending 10 hours walking through Montevideo, Uruguay.

Nothing. Other than some compliments.

Here’s the video (Go directly to Facebook here for the original.)

What makes Montevideo different from European cities? I don’t know the stats, but I suspect it is more religious, especially more Catholic and Protestant than any in Europe.

Well, it might be due to the fact that Uruguay is not in Europe, and therefore Montevideo would necessarily be different from a European city…

They don’t have unlimited immigration from Muslim countries in Uruguay, or in South America in general. They heavily control immigration.

The Muslim Triangle is in South America. It’s at the nexus of Paraguay, Brazil, and another country. Lots of Muslims in Venezuela and Guyana. I think Uruguay took in some of the Gitmo terrorists. This might be the last time a Jew receives that kind of reception once Muslims are allowed to be Muslim in that country.

Uruguay is the 2nd most atheist country in the world after China!

With a few exceptions, this was the standard in Latin America. Unfortunately since some of the countries have fallen into the hands of Socialism and automatic support for Palestine and Jihad, it has become more anti Semitic at a government level.
But more than having respect due to a law, a lot of the acceptance of Judaism comes from Pope John XXIII and his efforts to remove the old Catholic bias against Jews. Since he was a well loved Pope and Latin America is deeply Catholic, the message got through fast.

“Uruguay is a secular country where different religions live in peace”.

Also, there are very few Muzzies in South America.

It’s the most ethnically white European country in South America. They haven’t had a war in 160 years. Almost everyone in the country lives IN Montevideo. It has near perfect literacy. It’s ranked #1 in Democracy, peace, lack of corruption, quality of life, security, press freedom. The only dark period was military rule 1973-85. Gay marriage, abortion and weed are all legal.

I am so surprised by the hostility and mocking derision with which some secular Jews I know treat Chabad. They don’t try to coerce anyone, they simply offer and welcome Jews to practice their faith. A friend who is involved with Chabad told me that they want Jews to be Jews and Christians to be Christians…for everyone to worship G-d as they see fit, but to practice their faith. She’s blessed with such a nice big family, as well. This Rabbi’s experience shows what the world could be like. Made my day.

I used to encounter the Lubavitchers in Crown Heights. Polite. Nice neighbors. They rebuilt the neighborhood. It was always worth it to see their faces when greeted with “shalom”. They are not all white either; there are black Lubavitcher families there. Not a surprise there given the diaspora.

The Mitzvah Tank parked at 42nd and 5th will surely get your attention….