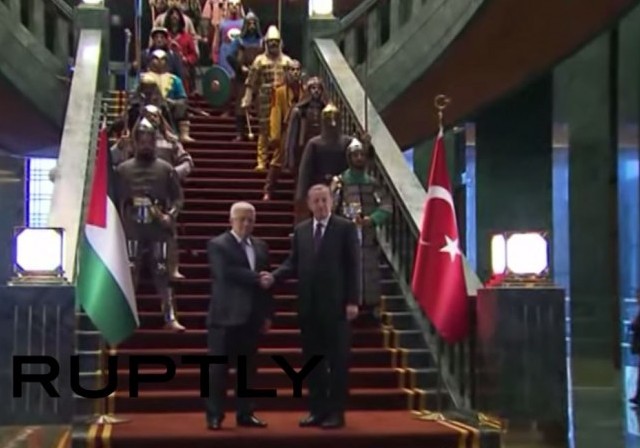 We have been warning about for years about Turkey’s Islamist President Recep Tayyip Erdoğan.

Erdogan systematically has set out to dismantl civil society and the secular military and foamed at the mouth about Israel, often through then Foreign Minister, now Prime Minister, Ahmet Davutoglu:

The Islamist terror attacks in Paris have not changed Erdoğan’s theatrics and paranoia:

The comments, at a press conference in Ankara with Palestinian president Mahmud Abbas, were the latest verbal assault against Netanyahu by Erdogan under whose rule Turkey’s relations with Israel have steadily deteriorated.

Is Erdoğan crazy? He sure has crazy theories that cover up for the Turkish intrigue in allowing the flow of Islamist fighters into Syria and Iraq:

The President of Turkey has suggested French security forces are to blame for the deadly terrorist attacks in Paris last week, since the culprits had recently served prison sentences.

Recep Tayyip Erdoğan accused the West of ‘playing games with the Islamic world’, warning fellow Muslims to be ‘aware’.

Erdogan said Muslims are ‘paying the price’ for the attacks on satirical magazine Charlie Hebdo and a Jewish kosher supermarket in Paris last week.

‘French citizens carry out such a massacre, and Muslims pay the price,’ Erdogan said yesterday.
‘That’s very meaningful … Doesn’t their intelligence organisation track those who leave prison?
‘Games are being played with the Islamic world, we need to be aware of this.

‘The West’s hypocrisy is obvious. As Muslims, we’ve never taken part in terrorist massacres. Behind these lie racism, hatespeech and Islamophobia,’ Erdogan added.

Note the men on the staircase dressed in Ottoman Empire attire.

Apparently Erdogan’s delusions of grandeur were not a one-off thing for the Abbas ceremony, Erdoğan greets Aliyev with 16 costumed warriors, ’Resurrection Anthem’:

As Erdoğan walked to greet Aliyev, the presidency’s band played “Resurrection Anthem,” the theme song of the show “Diriliş-Ertuğrul” (Resurrection-Ertuğrul), which is about the establishment of the Ottoman Empire. The song is a slightly altered version of “Dombra,” a Turkish nationalist song that was used by Erdoğan in his campaign for the March 30, 2014, local elections.

Army soldiers stood on one side of the president while 16 soldiers dressed up in ceremonial clothes representing each of the 16 states established by Turkic people throughout history were standing on his other side.

The warriors in historic costume made their first appearance during an official welcome ceremony held for Palestinian President Mahmoud Abbas during his visit to Ankara on Jan. 12….

In another controversial move, the government introduced a new draft bill enabling the government to design a new coat of arms that will represent the Turkish Republic. According to the new bill, the state’s coat of arms, which was removed with the abolishment of the sultanate years ago, will be reintroduced. A new commission will be established in Parliament to determine what the new coat of arms of the Turkish Republic will be, the bill states.

Things in Turkey are going to get worse before they get better, as crackdowns on social media and the press are proceeding uninterupted, Prosecutors launch probe into newspaper over publication of Charlie Hebdo cartoons:

Turkish prosecutors launched an investigation into daily Cumhuriyet on Jan. 15, a day after the newspaper published a selection of four pages of the French satirical magazine Charlie Hebdo’s first issue since last week’s attack that claimed 12 lives.

Although the newspaper opted not to publish the cover featuring the Prophet Muhammad among its selection, two of its columnists, Hikmet Çetinkaya and Ceyda Karan, penned articles in honor of the slayed magazine and chose to include the cover, which has once against stirred controversy among some Muslims.

Reports said the two columnists will be summoned by the Istanbul Prosecutor’s Office for featuring their article with the magazine’s cover.

The prosecution was launched on charges of “inciting the people to hatred or humiliation,” according to the article 216 of the Turkish Penal Code.

Perhaps we should not worry too much about the next Ottoman Emperor, it’s not like he’s best friends with the President of the United States, or something. Oh, wait.

Erdogan seems to forget that Europeans in the 19th century referred to the Ottoman Empire as “the sick man of Europe”, a name which can be well ascribed to Erdogan.

Erdogan once said “Democracy is like taking a bus. Once it gets to your stop, you get off.” Obama feels the same way.

And apparently we still are going to sell them advanced F-35 fighters:

“We will start F-35 orders either this year or the next. Right now, it is likely to be next year,” Bayar told reporters. “We will initially order two. The delivery time will be, depending on the orders, probably in 2017-2018.”

Two only. Will Erdogan start a bidding war between Iran, Russia and China?

We should really start to worry if Erdogan starts up the Janissary corps.

The guy on the left on the stairs looks like he’s cosplaying Loki from Marvel comics.

I know some Turks in the Istanbul area who are just as uneasy about this as you are, Professor. Plus, Erdogan policies are dragging Turkey down economically. Unfortunately, Erdogan has succeeded in removing members of the “deep state” who could have stopped him.