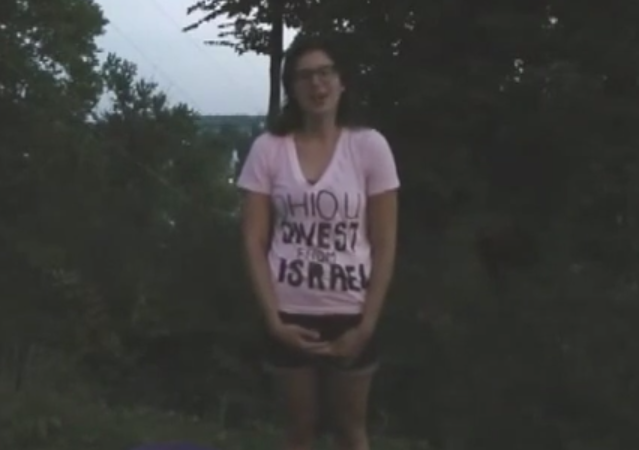 I know readers probably are skeptical when I constantly tell you how pathological the hatred of Israel is among many Boycott, Divest and Sanctions (BDS) supporters on campus.

I am not exaggerating. At all.

Israel hatred consumes their lives such that everything is politicized and used as an excuse to attack Israel. Even ordinary foodstuffs like hummus, coffee or couscous, are turned into political weapons.

It’s all about their politics — they feel no compunction about dominating student government and trying to turn assembly and senate meetings into tools in the war against Israel, and to dominate campus discussion to the exclusion of all other issues.

They proudly proclaim that even when they lose a divestment vote, they won because they forced student government to spend hours or days talking about how bad Israel supposedly is.

The outcome doesn't matter, what matters is you brought the entire world to its knees. #UCLAdivest

One of the most egregious examples was the student senate President — yes, President — at Ohio University, Megan Marzec, who used the ALS ice bucket challenge to bash Israel.

Marzec posted a video at Vimeo (since taken down, but preserved by others on YouTube) in which she poured a bucket of red liquid on her head as she gave a speech accusing Israel of genocide and other supposed crimes against humanity.

University student body president Megan Marzec took the “ALS Ice Bucket Challenge” to a new level, dumping a bucket of blood on herself in support of alleged Palestinian suffering at the hands of the Israeli state.

In the video, she intoned, “As student senate president, I’m sending a message of student concern about the genocide in Gaza and the occupation of Palestine by the Israeli state,” prior to endorsing the anti-Semitic Boycott, Divestment and Sanctions campaign against Israel which only singles out the Jewish state.

“I’m urging you and OU (Ohio University) to divest and cut all ties to academic and other Israeli institutions and businesses.”

“This bucket of blood symbolizes the thousands of displaced and murdered Palestinians- atrocities which OU is directly complacent in through cultural and economic ties with the Israeli state,” she explained.

Make no mistake, this was a BDS move, as Marzec made clear in the closing credits: 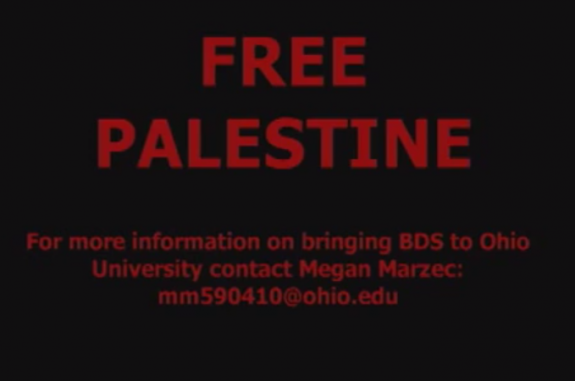 The student Senate tried to distance itself from this outrageous distortion and abuse of ALS fundraising:

On behalf of the student senate, we humbly apologize for the video President Megan Marzec posted.

This putrid stunt was particularly appalling considering that Israel is a leader in ALS research, with its scientists developing revolutionary stem cell treatments:

As the Ice Bucket Challenge raises millions for research into amyotrophic lateral sclerosis (ALS), an Israeli treatment to ease symptoms and slow the progression of ALS and other incurable neuromuscular diseases is going into Phase 2 clinical trials in three major US medical centers.

Last June, the publicly traded BrainStorm raised $10.5 million in private investments, and in July it was notified of the allowance of its US patent application.

Note specifically that key research is being conducted by researchers at Tel Aviv University, which is subject to the academic boycott passed by the American Studies Association and others.

Is there any better example of how Israel builds and BDS destroys that hijacking the ALS ice bucket challenge by the BDS movement?

Fortunately, students at OU are not remaining silent, as further reported by Truth Revolt:

Max Peltz, a student representative of the Alpha Epsilon Pi (AEPi) chapter at Ohio University took a strong and passionate stand against the bigotry of Student Union president Megyn Marzec, who hijacked the “ALS Ice Bucket Challenge” and dumped fake blood on herself in an effort to demonize Israel.

Peltz highlighted the factual inaccuracies in Marzec’s arguments and explained the evils that Israel encounters on a daily basis before calling on Marzec to remove the “embarrassing” video from the internet during a student senate meeting on Wednesday afternoon. In her video, Marzec called for the anti-Semitic Boycott, Divestment and Sanctions (BDS) movement against Israel and falsely alleged that Israel was guilty of committing genocide.

He concluded by requesting that Marzec resign.

I’ve said it before. I’m so proud of the pro-Israel students — Jewish and non-Jewish — who stand up to BDS on campus.

One of the things I’m grateful for is the lack of any means to record all the stupid, self-destructive things I did while my brain was still soft. It was the 60s, after all…

I can wish this child will one day come to realize how awful her views, words, and actions are. That would be a good day for her. I can recommend it.

In the words of the sixties, she needs to get her sh*t together.

Palestine was a minor Roman province. The only armed force occupying Gaza is Hamas.
The only murders committed in Gaza are those committed by Hamas.
When “genocide” results in a doubling or tripling of the target population, you’re doing it wrong or someone hasn’t the first clue as to the meaning of the term.

HOW did these people get this way? How?

I wonder if the student body at Ohio University will have the brains to impeach and remove her from office for bringing shame and dishonor to the university and the University Senate. I know that any President of any Student Body that that I was a member of would have already been well on his or her way to being removed from office for official incompetence.

Yes, she has “free speech.” That does NOT mean that her speech does not have consequences.