Grayson will not be charge with domestic violence after video and 911 call clear him. 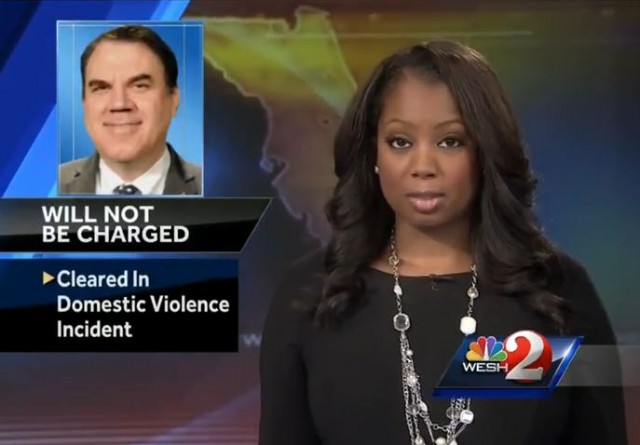 Alan Grayson will not be charged with wife-beating after an incident in which his wife Lolita claimed he hit her.

The video of the incident did not support her story and neither did the 911 call:

“Investigators have interviewed Lolita Carson-Grayson, Alan Grayson, and others and reviewed the evidence. In this instance probable cause does not exist to effect an arrest on Alan Grayson,” said a release from the Orange County Sheriff’s Office.

The Graysons, who were married 24 years, are divorcing and are living apart.

Grayson’s staffer Juan Lopez said the congressman went home to pick up his mail, his medication and see his children when he had a confrontation with his wife.

The incident was captured on video and witnessed by several people. Grayson’s attorney Mark NeJame says she video shows Lolita as the aggressor.

Deputies released a 911 call from after incident.

“Please come down and arrest him. He’s disturbing my peace and he’s threatening me,” Carson-Grayson said.

Carson-Grayson told the dispatcher during the call that Grayson did not hit her.

“I pushed him because he’s been coming to the house and he’s been disturbing my peace. Now he’s leaving,” she said.

Carson-Grayson then told the dispatcher that she didn’t need assistance, but on Sunday, she showed up at the Dr. Phillips Hospital Emergency Room saying her husband pushed her up against a door and she had bruises.

In other news, Grayson is still a loudmouth jerk.

Update: Unlike Zimmerman, the public will accept Grayson’s innocence. But it’s worth revisiting the Zimmerman case evidence, just because:

There’s a reason for each one of those pesky amendments. Ditto the Rules of Evidence.

Update: Unlike Zimmerman, the public will accept Grayson’s innocence.
***
A large part of the reason for that is the right will accept that the weight of evidence is on Grayson’s side, and the left will not accept the same for Zimmerman.

And precisely because that is true, the left will continue to act the way they do.

That’s because the Right only respects reality, whereas the Left dictates it. It’s good to be King, but it’s even better to be God (Or given the sensibilities of the Left, ‘God-like’).

But because of his overall scumbagitude, I reserve the right to forever refer to him as “accused wife beater” Alan Grayson.

Skittles. She didn’t have that Skittles thing working for her. Hard to portray a middle aged lady named Lolita as an innocent Skittle eating product of institutional racism rooted in a legacy of slavery.

However, if the congressman in question had been a Republican and his hyphenated soon to be former spouse was anyone except Sarah Palin, our classically trained professional journalists with the highest ethical standards would have done an Ezra Klein all over his right wing ass, Skittles or not.

I commented on gatewaypundit that the video he posted (with the blaring headline of course) was notsomething to be trusted and seemed to clear grayson.
would have loved for him to be guilty of it but didn’t think he was.

Hey, if he didn’t do it, he didn’t do it. Frankly it doesn’t change my opinion of the man, but I would never advocate for someone to be falsely accused or charged.

Next time she wants to beat Grayson to a pulp she needs to work out more, wear a hoodie and smash his head into the sidewalk a couple a dozen times.

Get that anger out, bitch!

Nevertheless, every marriage is valuable. We have so few, any more. This is just another one; perhaps another lost to the culture of moral corrosion.

So Grsyson went to pick up his medications? Hmmmmm…. Maybe lack of same explains his behavior