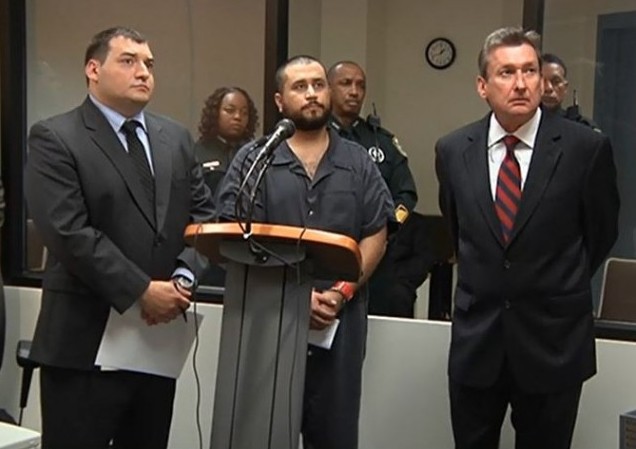 Just days ago we reported that George Zimmerman’s girlfriend wanted to drop charges and filed a court affidavit denying that any crime was committed.

Prosecutors just announced that the State will drop charges.  Zimmerman’s ankle monitor was removed and he is a completely free man now.

Prosecutors say they will not file domestic violence charges against George Zimmerman after his girlfriend said in a sworn statement she did not want to pursue the case.

State Attorney Phil Archer in Seminole County said in a statement Wednesday that Samantha Scheibe’s decision not to cooperate and the lack of other corroborating evidence made a successful prosecution unlikely.

Zimmerman had faced charges of aggravated assault, battery and criminal mischief following a Nov. 18 incident at the central Florida house he shared with Scheibe. She initially told police Zimmerman pointed a shotgun at her face, then recanted in an affidavit filed this week.

Zimmerman was acquitted last summer in the shooting death of unarmed, black teenager Trayvon Martin. The case sparked a nationwide debate about race and self-defense laws.

Court records: #GeorgeZImmerman has been released from his bond conditions, his GPS device will be removed. #Zimmerman 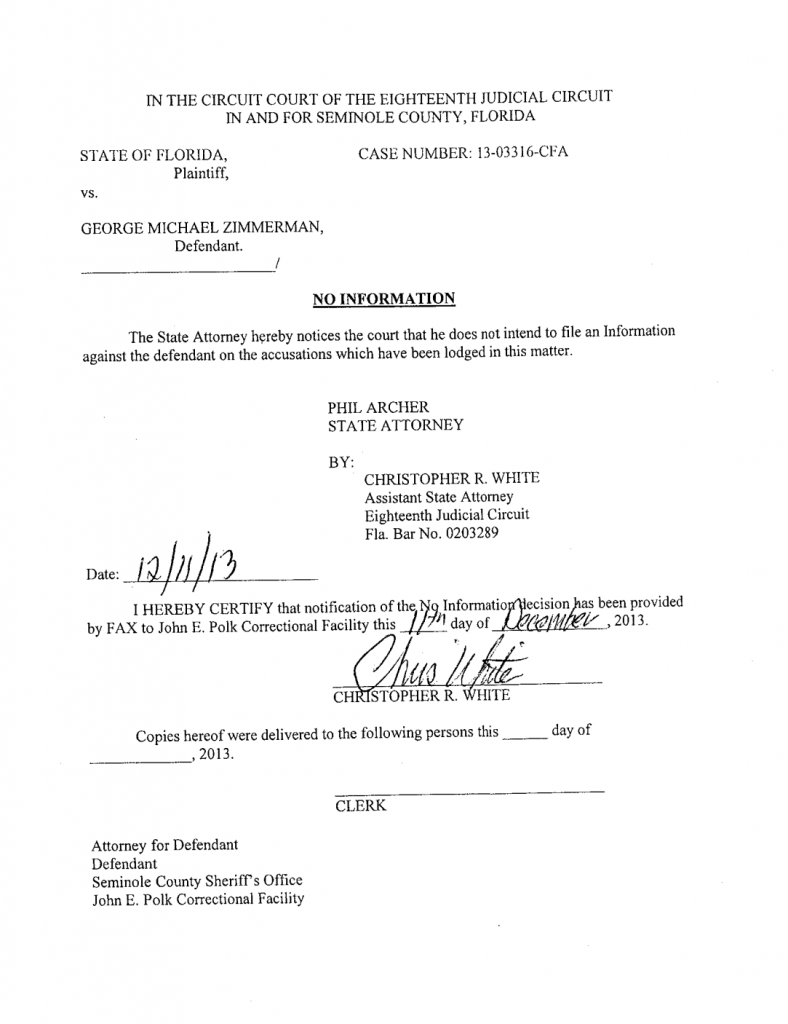 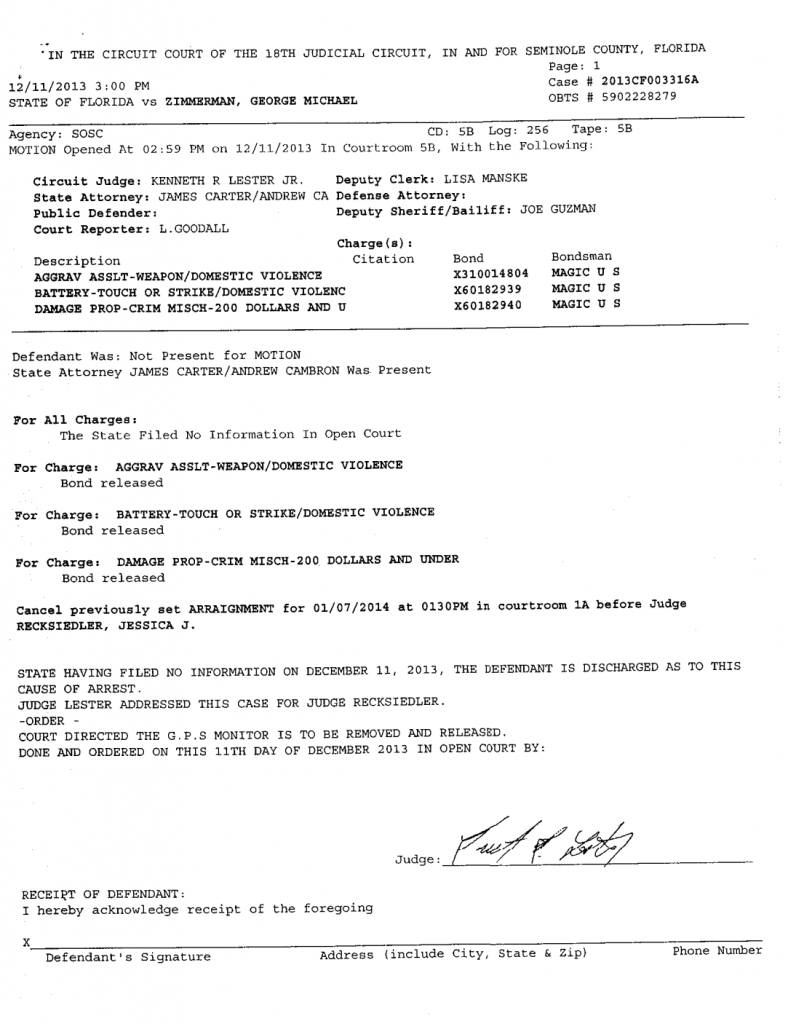 Didn’t see that one coming…. did we?

Dear Bob Beckel, You were wrong….. Again! Zimmerman is still not a maniac. Now, let’s discuss your unreasonable bias and name calling of Texans. Sincerely, Viewer

George, collect your firearms and get the hell out of Florida.

I suspect Zimmerman is stuck in Florida until his divorce is final. I can’t imagine he’s hanging around voluntarily.

I’m pretty sure you’re not banned from leaving the state just because your spouse has filed for divorce.

Divorce is a civil proceeding. GZ doesn’t have to be there. He also has no assets except his interest in the NBC lawsuit. He has a divorce lawyer.

George should move to GA temporarily so he can get to court when he really, really needs to, but otherwise let his lawyer handle it. He should stay as far away from those cops, courtrooms, plaintiffs and the rest of the lunatics as he can. When his divorce is over, he should go out into the world – to any red state except FL – and seek his fortune.

George? Hey buddy, listen up. North Dakota has plenty of JOBS that pay well and the weather to keep money thirsty gold diggers away.
Get moving son.

Working in the OFF SHORE oil field has MANY virtues.

Get your head straight, GZ. This could be your last chance.

Yeah, a lot of the crap that has fallen on you is totally wrong, but…damn…

As someone else has pointed out, “George Zimmerman went from a streetcar named ‘Self-Defense’ to the ‘Ex-Wife/Girlfriend Crazy Train’.”
Get off the train, George! (Soon-to-be-ex)wife and girlfriend have gotten what they wanted; their names splashed across the TV screens to gain notoriety to parlay into a book deal. Run, do not walk away from them.

You must have one helluva’ horn onya’ Z-man. Straighten up, fly right and get the friggin’ hell outta’ the dumbshine state.

I suspect that Zimmerman’s girlfriend is on the wrong side of the Barney Stinson Hot/Crazy scale.

George needs to take a sabbatical. There are those that will be trying to goad him into a reaction. I think North Dakota would be a good place for him to hang for a while.

I honestly don’t know what to think about all this. I don’t know if George is volatile or not. I just know that he didn’t get a fair break in the press or from the Florida D.A.. And I know Trayvon Martin was made into a poor little martyr by the press when we, who took the time to find out, knew he wasn’t.

I would imagine that Zimmerman is feeling pretty alone right now.

The woman is obviously a succubus.

Well, I had a different noun in mind. However, she certainly has something he likes. And vice versa.

One piece of advice. If she has any of your stuff, take a friend–better take two– with you when you go to get it back.

JackRussellTerrierist in reply to MouseTheLuckyDog. | December 12, 2013 at 2:12 am

Forget the stuff. Let her keep it. He should move on and stay as far away from her and Shellie as possible.

Remember that scene from Full Metal Jacket when Gunny finds the jelly donut and tells Pile “They’re paying for it! You eat it!”.

I lived in Minnesota for 7 years. It was great except for the occasional -30 below from Nov to March, the tornadoes, the humongous biting insects, the snow(even in May). I hear North Dakota is much more dramatic than that. George, I hope you read this blog, could save your life. As a Floridian you would need to reach deep in your credit card to out fit you with arctic wear, snow tires and such. Then let your body spend the rest of winter getting out of its Florida ways.

But its worth it! No bimbo’s erupting on your lap! No wannabes pulling a gun on you! No cops looking to give you “what for”. I say that has to be paradise for you.

I’ve heard the Thailand has some really nice beaches. One could go there and sit on the beach for a while, and no one would know or care who you are.

And if you feel the need for spiritual advice, I’m sure the Buddhist monks can provide some insights. Just mind the political upheavals don’t get mixed up in any of those crowds and keep your politics to yourself.

Peru is nice this time of year. Isn’t that where his Mom is from?

On the other hand … maybe George shouldn’t have to run … just go to another state, and quit speeding, and maybe accept a little counsel.

Or he could get an agent, and go on tour, make money off his 15(,000) minutes of incidental fame. How many have the US prez’ and the top cop attack them, and have a bounty put on them, and come out smelling (kinda) like a rose? He just needs Oprah to declare .. “I believe, he may be The One”.

Bwahahaha! My sides are hurting. 🙂

this is bound to happen when arrest people without probable cause. At this point I think the State of Florida owes Zimmerman more than “I’m Sorry”, he should get protection from harassment from the state. Maybe some sort of qualified immunity from arrest without say a Grand Jury indictment that has also been signed off by a judge and the Governor.

The dumbshine state is 3 for 3 on their arrests of GZ with no PC. At some point, do they not just throw in the towel and move on?

You people and your “dumbshine state” are clearly jealous.

Case dismissed, and that’s it? The accuser never get any slap on the wrist, at least? GZ should be compensated but this.

That’s how DV works. Women can throw accusations out all day long, get protection orders (sometime forever) and there will never be any due process.

DV accusations are EXTREMELY effective in custody battles. Because not only is the dude fighting a stacked system in the custody battle in the first place, but with the DV accusation, he will usually go bankrupt fighting the false claim.

In 12 years of following this stuff- I have NEVER seen blow back for a false accusation on the accuser.

Also the police and prosecutors office are incentivized by federal VAWA $ to drum up as many DV cases as they can.

I always have an evil chuckle when someone gets pulled down the rabbit hole of DV- because there is NOTHING constitutional about how these laws roll… but society looks at activists fighting these laws like they are crazy pro-wife beaters.

I note that the AP found it necessary to tag on the “unarmed black teenager” meme, but no mention that it was self-defense in the course of an assault by the UBT. There is no helping the MSM.

St. Travon is looking up on this earthly event. Sad with a tear on his cheek, quickly evaporating in the intense heat, asking himself if there is no limit.

Since GZ is an Obama voter, I have no hope he reads this board to take to heart such sage counsel. He would be well served by it.