@SodaStreamUSA response to Limbaugh boycott: “We continue to advertise”

@SodaStreamUSA response to Limbaugh boycott: “We continue to advertise”

SodaStream is an Israeli company which makes a really cool and really popular product, essentially a make your own soda at home device.  I plan on getting one.  Its U.S. division is SodaStreamUSA.

This video shows the SodaStream story of building bridges between Jews and Arabs:

Nonetheless, SodaStream has been the subject of a vicious boycott by the anti-Israel BDS movement, that grouping of Islamist, anti-Israel leftists and academics and other fringe players like Code Pink, which seeks to delegitimize Israel.  The latest iteration, as you know, was the pressure campaign which succeeded in convincing Stephen Hawking to boycott an Israeli conference.

SodaStream is not alone as a BDS target.  We previously have written about Sabra hummus and Aroma Café (and we urged a “BUYcott”).

Ironically, this commercial was banned by CBS during the SuperBowl not because of the BDS movement (which did try to get SodaStream banned) but because it upset certain other advertisers:

Because SodaStream recently began advertising on the Rush Limbaugh show, SodaStream now also is subjected to the secondary boycott run by Media Matters and that assemblage of real and fictitious activists using the banner of “Stop Rush” and “Flush Rush” who seek to win the argument by depriving Limbaugh and other conservatives of platforms.

We wrote about this phenomenon recently, Why is Daily Kos so afraid of some speech competition from the Koch Brothers?

BDS and Stop Rush are joined at the hip, as this Daily Kos post calling for a joint boycott of SodaStream shows: 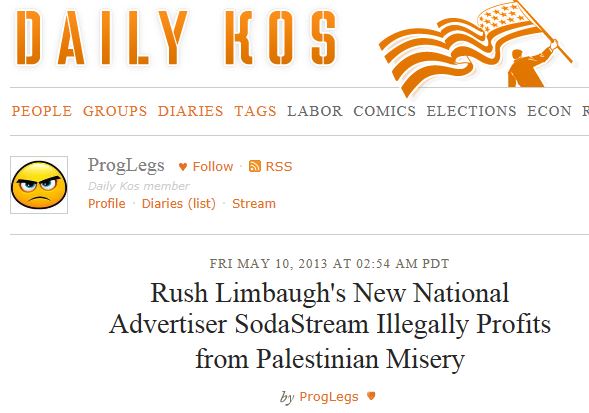 The usual tactics are being used against SodaStream, tweets from the assemblage of real and fake Twitter and Facebook accounts to make it seem to SodaStream that there is a mass movement behind the boycott, when in fact it is just the usual Media Matters astroturfed Potemkin social media village.

I reached out to SodaStreamUSA to ask its position on the boycott, and whether it would stop advertising.

The response was direct and pretty clear:

“We continue to advertise”

Let’s hope SodaStreamUSA stands strong.  The same people who hate SodaStreamUSA for advertising on the No. 1 Talk Radio Show already hate it for being Israeli.

The only entities which have a legitimate reason to hate SodaStream are PepsiCo and Coca Cola. SodaStream is a great, inexpensive alternative to canned and bottled drinks.

So SodaStream ‘illegally profits from [Arab] misery”, eh? Is there a ‘legal’ way to profit from Arab ‘misery’? Who decides if the ‘profit’ is legal or illegal? The underlying premise –Arabs are victims of Israelis – is seriously flawed.

I’ve been thinking of buying one. This made up my mind for me. Off to Amazon.com…

Me, too. Support Rush, support an Israeli company, defy a media matters boycott…..it’s a win-win-win situation!

And I don’t even drink soda, but it will be nice to have around for guests who do.

Don’t forget to use the Prof’s Amazon portal!

Yes, use the Professor’s link to Amazon.

Lots of Soda Stream product there – something for everyone!

What is it about the left that causes them to fear ONE guy who quite frankly is not listened to by a majority of Americans?

I’ve never known Rush to tell a lie but hardly ever listen to his show as I seldom listen to radio anyway.

What is it that makes the left so paranoid?

Could it be the truth??

Pres. Side Show blamed all his cares and woes on Limbaugh the other day.

Mighty powerful for someone walking into twilight, I’d say…

That just shows how un-important he is –
not only un-important………………. but totally insignificant.

Only 2-year old pulls that.

Some people will never stop hating.
Hatred is how they were taught as children to honor their families.
They will die hating with a smile on their face.

To DUMBLY KOS and their propaganda, I say boil sheets!

The kos-kreeps have been divested from reality for years.

Yehuda matzos are made in Jerusalem. The taste is pleasantly bland. I stock up really cheap after Passover and use them as crackers for cheese and soup.

Yeah, that blandness is an acquired taste. They’re really good with a nice sharp cheddar, too.

I have one, and it’s wonderful. What it really is is just an update of the seltzer bottles you would see in old slapstick silent movies.

The flavors are a matter of taste – the orange and grape diet sodas are both better than store bought, as is the diet cola. The diet ginger ale is also very good.

A warning – the first few attempts may have a strange taste until all the tubes and plastics in it clear out.

THAT is a chunk of truth that our dear Republic would do well to ponder. From the socialist/marxist/anarchist thugs all the way to multi-flavored Islamic fanatics – appeasement equates to weakness. Embracing multiculturalism and political correctness have just become euphemisms for appeasement, best exampled by the tame RINOs amongst our elected delegates.

Get one. It totally rocks.

I like my Soda Stream. Orange, Root Beer and Ginger Ale, are my favorites. Also, when someone trots one of these boycotts out, I try to support whomever they’re targeting. In Wisconsin, during the recall, many of the leftist thugs targeted stores who were either trying to stay out of it, or supporting Walker, for boycotts. Myself, and others, participated in buy-cotts to counter act the garbage from the left. The left, and the adherents of the religion of pieces will always hate and blame Israel for their problems.