When they say Boycott Divest and Sanction Israel, they don’t really mean it.  Those are just code words for Destroy Israel.

Below is a video of a demonstration in London as part of the BDS(D) movement, via @EliLake, who notes

At the link is this image: 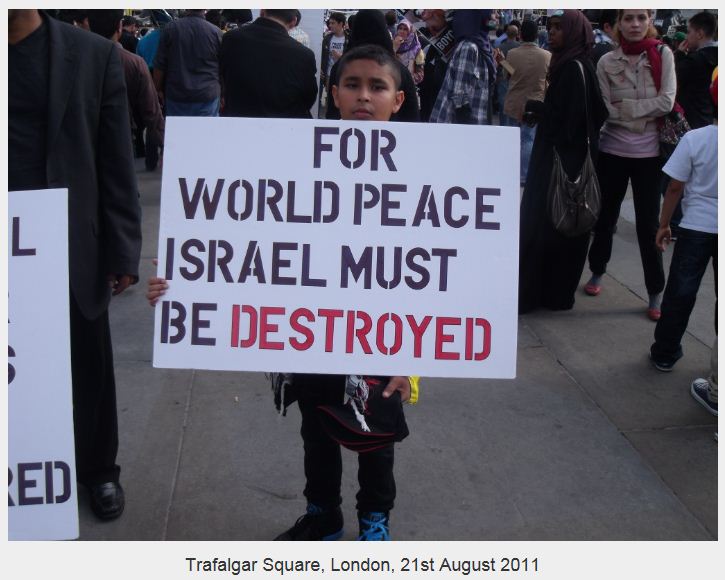 And this video.  The woman sounds very much like the woman in my post yesterday who berated Muslim shop owners for selling Israeli products.

As we (the West) have opened our doors to Islam, we now have people with names like Lauren Booth, who are openly preaching to large crowds in Trafalgar Square for the destruction of Israel.

We have been naive, have we not?

“For World Peace Israel Must Be Destroyed.”

Awwww … I think that’s a riff on the old saying, “You have to be cruel to be kind.”

To keep “world opinion” and the “international community” from always coming down on the side against Israel, Israel must be destroyed for everyone’s own good, especially the Israelis.”

LukeHandCool (who was tempted to blurt out, “Eureka!” … but, looking at that sweet lady up on stage speaking to that friedly-looking crowd, instead exclaimed, “By Jove! I think she’s got it!”).

Israel is forever, no matter what the pre’sent in the WH does at the UN in September. Anybody who can read history knows that Israel was divinely deeded and HE Who deeded it always wins! Glenn Beck is in Israel and broadcasting on GBTV until Wednesday to encourage the Jews and the government. Benjamin Netanyahu read Ezekiel 38 and seems to indicate it is that time. Do you know what Benyamin means in Hebrew? “Son of my right hand”.
The West Bank is actually Judea and Samaria. The Samaritans have lived there for thousands of years continuously and in the census there were 900 of them who identified themselves as Samaritan(hint, they are mentioned in the Bible). Not many North American Jews have made aliyah but from this current evil anti-semitic administration, that will probably change. Why, oh, why don’t the liberal secular Jews see that Israel is their homeland?
Thank you, Professor, for pointing out the 1790 George Washington letter to the Touro Synagogue. The letter was a reply to the warden, Moses Seixas of the congregation:
Moses Seixas’s letter on behalf of the congregation – he described them as “the children of the Stock of Abraham” – expressed the Jewish community’s esteem for President Washington and joined “with our fellow citizens in welcoming [him] to New Port.” The congregation expressed its pleasure that the God of Israel, who had protected King David, had also protected General Washington, and that the same spirit which resided in the bosom of Daniel and allowed him to govern over the “Babylonish Empire” now rested upon Washington. While the rest of world Jewry lived under the rule of monarchs, potentates and despots, as American citizens the members of the congregation were part of a great experiment: a government “erected by the Majesty of the People,” to which they could look to ensure their “invaluable rights as free citizens.”

Seixas expressed his vision of an American government in words that have become a part of the national lexicon. He beheld in the United States “a Government which to bigotry gives no sanction, to persecution no assistance—but generously affording to All liberty of conscience, and immunities of citizenship: – deeming every one, of whatever nation, tongue or language equal parts of the great Governmental Machine: – This so ample and extensive federal union whose basis is Philanthropy, mutual confidence, and public virtue, we cannot but acknowledge to be the work of the Great God, who ruleth the Armies of Heaven, and among the Inhabitants of the Earth, doing whatsoever seemeth [to Him] good.”

Seixas closed his letter to the president by asking God to send the “Angel who conducted our forefathers through the wilderness into the promised land [to] conduct [Washington] through all the difficulties and dangers of this mortal life.” He told Washington of his hope that “when like Joshua full of days, and full of honour, you are gathered to your Fathers, may you be admitted into the Heavenly Paradise to partake of the water of life, and the tree of immortality.”
See a copy of Mr. Seixas letter posted at http://www.jewishvirtuallibrary.org/source/US-Israel/bigotry.htm

I think it would be a better decision to turn against those who advocate the destruction of Israel. They are the servants of evil.

[…] of flaming hypocrisy, how about a heaping helping of more of that “smart diplomacy.” Beers with Demo has more on “Your unauthorized Libyan military kinesiology […]

Lauren Booth, the speaker in this clip, is Tony Blair’s sister-in-law. She has form (google it) even before her reversion.

Truly, there is something wrong with these evil people. Had the Hamas government been recognized in Gaza, wouldn’t the Israelis been justified in retaliating against acts of war? When will the Israelis tire of the Palestinians and just destroy every building in the Gaza strip? Obviously the “men” there don’t mind putting their women, children and elderly in harms way.