The Daily Kos is reacting very hysterically to the mere possibility that the Koch Brothers might buy 8 Tribune Co. newspapers, including the L.A. Times.

Kos has teamed up with SEIU and others to try to pressure the Tribune not to sell the papers to the Koch Brothers, as noted at Hot Air, New left-wing coalition begs Tribune Company: Don’t sell the LA Times to the Koch brothers.

The whole campaign is based on the laughable premise that the Tribune papers are unbiased:

Millions of Americans rely on the news outlets currently operated by the Tribune Company to provide them with accurate, unbiased information about pressing issues in their communities and around the world. Ownership by two of the most influential and radical right wing ideologues in the country will skew trusted news sources to further their interests and debase our democracy.

Any news outlet owned by such intensely partisan activists could not be trusted to provide an honest account of a wide variety of issues that are of vital importance to the public.

Really, what is Kos so afraid of?

The Murdock media group and talk radio are all that stand in the way of total domination.  It’s not surprising, therefore, that we see organized efforts launched many years ago to try to take down Fox News and to deprive Rush Limbaugh and other conservative radio hosts of platforms.  It hasn’t worked, but not for lack of trying.

The Koch Brothers might breath a little more fresh air into the liberal media echo chamber.

It’s ironic that Daily Kos, which made an end run around traditional media and built a powerful internet and political voice, is so afraid of the Koch Brother buying failed newspaper operations.  It just goes to show you how deep the fear runs.

I don’t hear the Koch Brothers trying to deprive Daily Kos of a platform.

Are the intellectual foundations of your views so weak that you cannot stand even a little competition and have to deprive others of a platform? 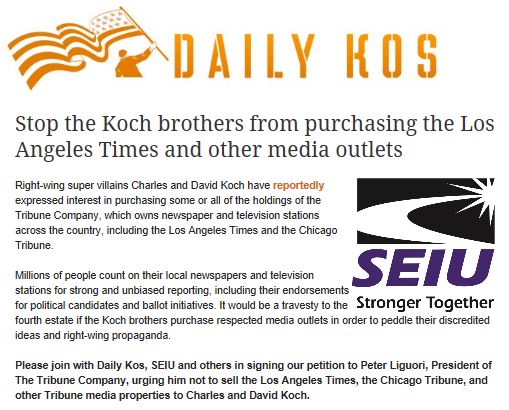 The panicked actions from the Daily Kos are practically dripping in irony. But I suspect it has less to do with ideological bias than it does with the absolute contempt for, and fear of, the Koch family. And their past success. Surely Kos and others are unrelenting in their effort to marginalize all but the leftmost voices and outlets. Such strong reactions convince me they recognize their inability to squelch Fox, Limbaugh, et al., and they see the Koch dynasty as even more invincible.

What’s funny is that except for the truly committed moonbats in their cohort, I’d bet a box of donuts that all the members of Kosikstan have at least one product in their homes that is connected to Koch Industries’ holdings.

Have you ever tried to explain reality to the rabid liberals, especially when they react to “Koch Brothers” like Hunter S. Thompson’s dog in Where The Buffalo Roam when he hears, “Nixon”?

The Kochs are Libertarians (Fun Fact: David was the 1980 Vice Presidential candidate) who support gay marriage and legalizing drugs, but because they’re for free markets and thus support less-statist candidates, they’re the enemies of the liberal state. Look at how they point to the prank call to Scott Walker posing as a Koch; it was clear that Walker didn’t know very well the person he was talking to, but the fact he took the call made him Darth Vader taking a call from the Emperor.

I will renew my long-cancelled subscription to the LA Times if it is purchased by the Koch brothers.

If the Koch Brothers bought those papers I would subscribe AND PAY MONEY for an online edition, until they grew successful and figured out how to distribute overnight all over the state. And drive the vile progressives out of business. THAT’S THE REAL FEAR. Kos is just carrying their bathwater.

Just like with the Twinkie debacle, unions would rather see the entire operation shut down than back down.

This is exactly the as attitude that lead to the demise of the LA Times’ only major competitor, the LA Herald-Examiner. The unions shut it down rather than let it be taken over by the “evil, right-wing” LA Times. (The worst crime: the proposed combining of printing operations would have cost some print shop jobs.)

Millions of Americans rely on the news outlets currently operated by the Tribune Company to provide them with accurate, unbiased information … … now stop right there .. this is already a loser

The small ace in the hole here concerns the Tribune’s board of directors. They have a fiduciary responsibility to shareholders to earn the highest return. Failing that duty and bending to these leftist voices sets up directors for personal liability. Could be cause for a sleepless night or two.

What of course has the left all atwitter is the truth. With Koch ownership leftist fables, already unsteady, would tumble that much sooner.

Kos’ starting point is that the Koch brothers would automatically change the editorial content, a position for which there is no evidence. If one starts from the assumption that the current content is unbiased (as Kos does), why would you assume that it will become biased if the Koch brothers take over.

Of course, if you know the content is completely biased, then you would automatically assume that someone from the other side, like the Koch brothers, would reverse the bias.

Kos is simply highlighting the liberal bias of the media through their actions.

You really hit the nail on the head(!).

The DKos tantrum stems from the assumption that the ownership drives the content, unwittingly highlighting the fact that today’s media has shuffled off the restraint of informing the public of “who, what, when, where, why”.

Sadly, there’s a large bloc of voters who are too lazy or are simply incapable of drawing their own conclusions (as demonstrated by 0bama’s re-election). The very idea that a competing philosophy might guide their electoral choices truly frightens the Kossacks.

Why would they buy a failing entity?

One needs special Murdoch like skills to turn failing media businesses around.

But the fear of it happening has had the desired effect.

If your argument is a loser, you must keep others off the debate stage.

It has little to do with the Kochs themselves, who are more libertarian than “right-wing” anyway.

Ace put forth the theory which seems most correct: the media found out, after exposure of the secret “Journolist” email group designed to coordinate how stories were reported so people wouldn’t get all confused by facts that might lead them to believe conservatives were right, that they didn’t need to meet secretly to agree, they already agree on everything. All they have to do is refuse to cover any story that might hurt Obama or Democrats or leftist issues in any way.

All they have to do to sell their refusal is keep the lid on those inconvenient facts. They can let Fox report anything as long as it is ONLY Fox, because then they can dismiss the reporting as, “Well, it’s Fox, right?”

When MSM reporters actually try to report, like Atkkinson at CBS on Fast & Furious or Benghazi, they find themselves negotiating to end their contracts early.

It’s not pretty, but Goebbels would be impressed with the message discipline when they don’t even have to arrest anyone.

Iowahawk: “Journalism is about covering important stories–with a pillow, until they stop moving.”

So it’s pretty obvious that the proliferation of a lie requires thousands of times more false reporting than one report of truth.

Ace of Spades wrote about how liberals view the media yesterday in the context of their seeking to punish CBS News’ Sharyl Attkisson for daring report on Benghazi: http://ace.mu.nu/archives/339804.php

“Why is it so important for the liberals to push out the only reporter who covered Benghazi?

“Ghettoization.” If the “neutral media” — actually liberal as hell — can present a unified party line on stories, always supporting one another and never showing a crack in the wall, they can sneer at stories they don’t like by saying “Only Fox claims that.”

But for those in the liberal media who consider the airwaves Their Air — a valuable property they own and can exploit as any property-owner can, for their own benefit, to their own taste — this is a problem for exactly the same reasons. Just as we claim victory when we say “Now it’s on CBS!,” so too do liberals feel failure when a true story that hurts liberals escapes from the conservative news/talk radio ghetto and shows up on Their Air.

And so, while they can’t push Sharyl Attkisson out of the profession, they can give up a major reporter to Fox, which reduces the damage she can do.

After all, if she reports over there, “It’s just a Fox story.” The liberal media remains pristine and unified in its Ideological Wall of Silence.

Similarly, the media can never be embarrassed by its liberal bias and deliberate suppression of the news for political purposes if no one in the media ever breaches the wall of silence and clues the public in to what it’s hiding. Even though CBS is currently pointing at Sharyl Atkkisson as The Only Network Reporter Who Reported on Benghazi, they’re resentful about it, because her work stands as a rebuke to their own, and as a rebuke to their politicization of the news for the benefit of a political party.

But what if she was disappeared? What if her respectability and credibility were stripped from her?

Ah, then that would be glorious. Because there would be no troublesome reporter at CBS embarrassing the rest. She would just be a Fox Personality, and hence, neutralized.”

[…] Why is Daily Kos so afraid of some speech competition from the Koch Brothers? – Le·gal In·su…. “Isn’t having NBC, MSNBC, ABC, CBS, CNN, PBS, Huffington Post / AOL, Yahoo, Google, The NY Times, The Washington Post, Hollywood, the music industry, almost all of Higher Ed, Silicon Valley, and almost every major media outlet on your side enough?…Kos isn’t trying to protect journalism, it’s trying to protect a near monopoly on traditional media outlets.” […]

I can’t imagine what Kos’ reaction will be when the Koch brothers buy the Daily Kos.

Al Gore can sell his channel to Al Jazeera, but God help us if somebody sells a paper to the Koch Brothers.